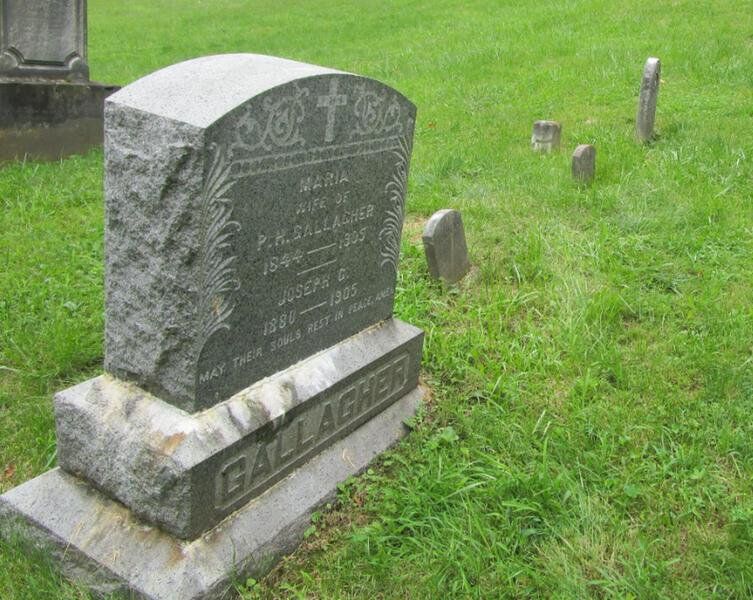 The family of Patrick and Maria “Mary” Gannon have a gravesite in St. Gabriel’s Cemetery in Barton. 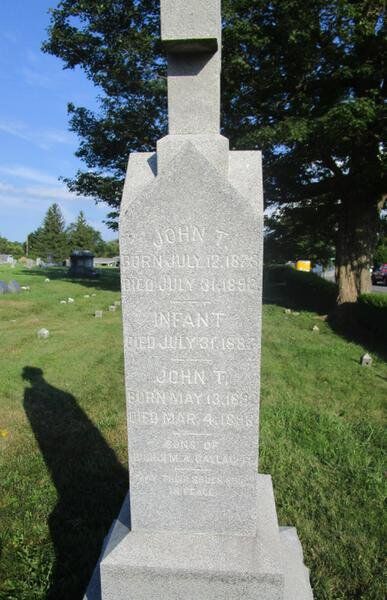 The Gallagher stone in St. Michael’s Cemetery in Frostburg records the ancestry of the Hugh and Mary Boyle Gallagher family.

The family of Patrick and Maria “Mary” Gannon have a gravesite in St. Gabriel’s Cemetery in Barton.

The Gallagher stone in St. Michael’s Cemetery in Frostburg records the ancestry of the Hugh and Mary Boyle Gallagher family.

Editor’s note: Each week “Miner Recollections” will spotlight Georges Creek coal heritage, and the sacrifices made by those who mined it, by drawing upon biographical sketches, family narratives and historical research.

Cemeteries are peaceful and solemnly silent fields of eternal rest, with stories to tell that are written in stone.

Hugh Gallagher was born in County Donegal in 1845 at the beginning of the great potato famine. By the time Hugh was 9 years old, his parents had experienced enough poverty and starvation; they searched for a more promising life that led them to Pennsylvania. As a child, Hugh survived the famine; he became a man just as the war between the States broke out.

Hugh was a volunteer in the 149th Pennsylvania Infantry in the infamous Bucktail Regiment. This regiment, formed in August 1862, was renowned for wearing a bucktail in their cap as a trophy for marksmanship. They fought at Chancellorsville, Gettysburg, the Wilderness, Spotsylvania Court House, Cold Harbor and Petersburg — some of the bloodiest and most deadly battles of the war. Hugh made it back to the Keystone State while on furlough in 1863 and married Mary A. Boyle. He soon returned to his unit and mustered out in June 1865.

Six of Hugh and Mary’s 13 children were born in Pennsylvania; in 1873 the family packed up their offspring and belongings and moved to Lonaconing. Whether Hugh was an experienced coal miner is unknown, but sometime before 1880 he joined the force of men digging coal from the depths of the Georges Creek Valley.

Although three of the Gallagher children were deceased, there were still 10 mouths to feed. Son Hugh Jr. began helping to put food on the table when he became a 14-year-old coal miner. Four of his brothers (John Thomas, Frank, Dennis and Joseph) joined their father as they, too, reached that ominous age of 14.

John Thomas Gallagher’s life as a coal miner probably seemed endless to him; it lasted just five short years. He died July 31, 1891, after being kicked by a mule in Koontz Mine. The Cumberland Weekly Civilian reports that “John Gallagher died Saturday morning at 3:00. The young man was 19 years of age and was well and favorably known.” He was buried in St. Michael’s Cemetery in Frostburg and remembered as a “chapter” on the Gallagher story in stone. The large upright grave marker lists the name of John Thomas’ sister Catherine, who was born in 1887 and lived for only 15 days. In 1892, another Gallagher baby was born; he was named John Thomas in memory of his deceased brother. His name was added to the tall stone just four years later. Their mother, Mary Boyle Gallagher, died in 1902; father, Hugh Gallagher, died in 1909. The large tombstone records the Gallagher family ancestry. Nearby is a similar stone marker for Margaret A. Gallagher Freel. Mrs. Freel, born in 1828, was also from Donegal, Ireland. She died in Frostburg in 1914. Was she related to this Gallagher clan?

Patrick H. Gallagher was born in County Mayo, Ireland, in 1845, the same year that Hugh Gallagher was born. Like Hugh, Patrick survived the potato famine. Unlike Hugh, he missed serving in the Civil War, as he did not immigrate to America until 1866. He married Maria “Mary” Gannon, a native of Maryland, soon after his arrival. The young couple settled in Pekin where Patrick was employed as an underground coal miner.

The family began to grow soon after Patrick and Mary both said, “I do.” By 1900, Mary had given birth to 11 children, five of whom had died. The stone markers bearing the name Gallagher were beginning to multiply in St. Gabriel’s Cemetery in Barton.

Patrick and Mary’s son Dennis was injured in Potomac Mine, located on the southern flank of Jackson Mountain. The Piedmont Herald of June 17 and 24, 1892, reported the story: “Dennis Gallagher, son of Patrick H. Gallagher, died Tuesday from injuries received in Potomac Mine about a year ago … The funeral for Dennis Gallagher, who died at the residence of his father on Quality Hill in Barton on June 13, took place from St. Gabriel’s Catholic Church the following Thursday. The funeral was attended by Division No. 3, Ancient Order of Hibernians of which he was secretary and the T.A. and B Society (Total Abstinence and Benefit Society). The deceased was about twenty years of age, a person of noble character and marked intelligence, and gave promise of being a brilliant man. He was noted for his gentle, refined nature and was beloved by all who knew him.”

The following year another stone was placed in the family plot when Dennis’ brother Thomas Edward died at the age of 21.

1905 brought more sorrow to the family when another son, Joseph, died on Nov. 2 at the age of 26. His mother, Mary, was so ill she could not attend the funeral; she died a few weeks later.

Hugh Gallagher and Patrick Gallagher had much in common. They were both born in Ireland in 1845, both were coal miners, they both buried several children, both lost sons to tragic mining accidents and both became widowers before they died.

In St. Michael’s Cemetery the large upright Gallagher stone stands like a proud sentinel guarding the family beneath it. In St. Gabriel’s Cemetery Mr. and Mrs. Gallagher’s stone appears to be protecting the little grouping of stones nearby, just as they protected their children in life.

Cemeteries are peaceful and solemnly silent, yet they are like outdoor museums where the past is preserved for future generations. The stones are like a fresh air library lined up in a grassy field waiting to be read. Their pages reveal the origin and time of birth; the brevity or length of a marriage; the births and burials of children; the occupation or organizations attended. Depending on the size, construction and location of the “library book,” it may reveal poverty or plenty; church affiliation; the manner of death; and always, the date of death. Sometimes the pages have been obliterated by time, weather and vandalism; but they are still worth reading.

Like mysteries, these library books did not reveal the relationship of Hugh, Patrick and Margaret Gallagher Freel or how John and Dennis Gallagher died. There are missing chapters to the story.

While walking in the cemetery a few weeks ago, our 9-year-old twin grandchildren, Jack and Alivia (who devour books and love libraries), were curious about the tombstones. Jack, with his calculator-like mind, helped figure the ages of people and how long ago they died; Alivia, with her penchant for writing, helped collect the facts and turn them into bibliographies. The committee would like to thank Jack and Alivia Horn for helping to find and organize the endless information found in the peaceful libraries where stories are written on stone.

“Miner Recollections Volume Two 2019” is a 250-page compilation of stories, pictures, maps, and an updated list of deceased miners. Proceeds support the installation of a life-sized bronze statue and the educational landscaping that will surround it. Books are available at Armstrong insurance in Frostburg or by contacting Polla Horn at jph68@verizon.net or Bucky Schriver at bucky1015@comcast.net.

CRESAPTOWN - Forest Lee Mongold, 33, of Cresaptown, passed away Thursday, Jan. 14, 2021, at his home. Services will be private. Adams Family Funeral Home, P.A., Cumberland, is in charge of arrangements.