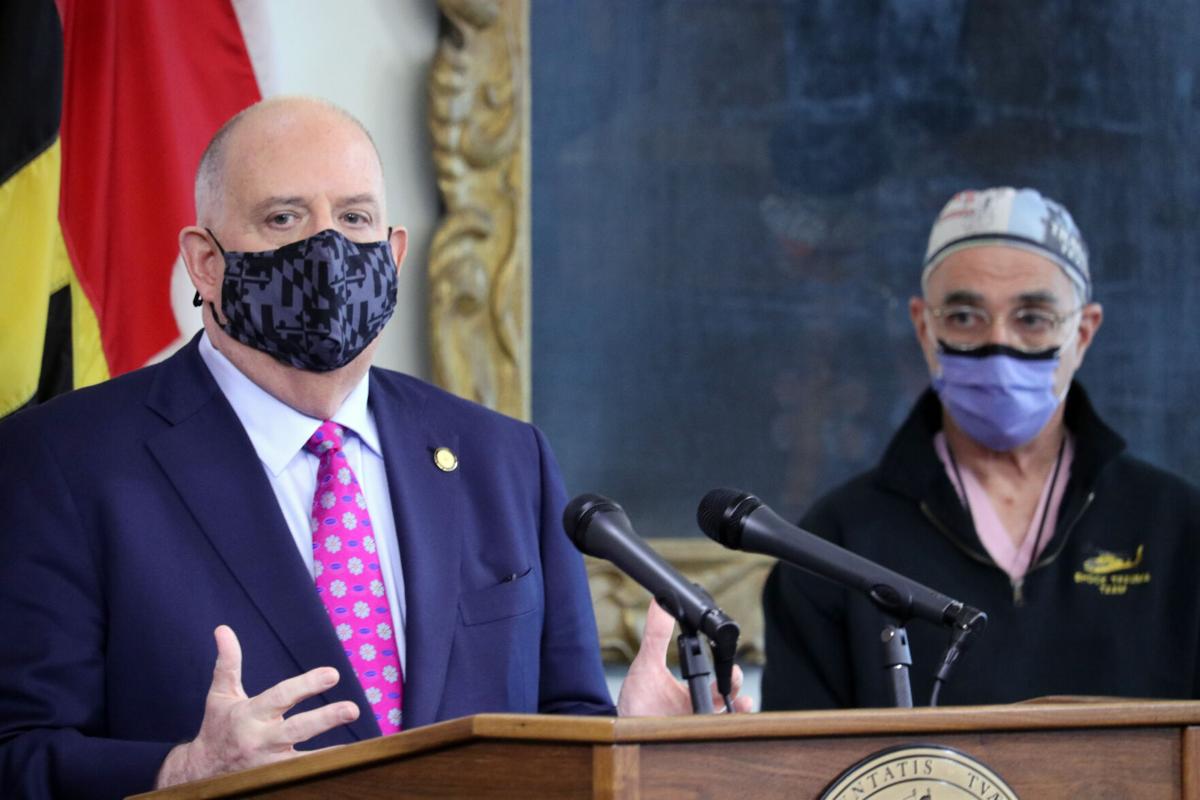 Maryland Gov. Larry Hogan takes questions from journalists about a variety of new measures Maryland is taking to try to fight a surge in cases of the coronavirus, including new restrictions and reductions in capacity and closing times for businesses, during a news conference on Tuesday in Annapolis. Dr. Thomas Scalea, physician in chief of the R Adams Cowley Shock Trauma Center, is standing right. 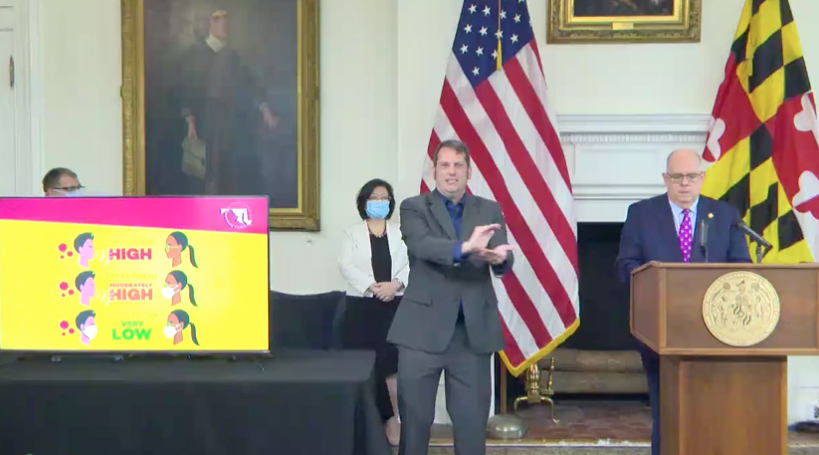 Maryland Gov. Larry Hogan takes questions from journalists about a variety of new measures Maryland is taking to try to fight a surge in cases of the coronavirus, including new restrictions and reductions in capacity and closing times for businesses, during a news conference on Tuesday in Annapolis. Dr. Thomas Scalea, physician in chief of the R Adams Cowley Shock Trauma Center, is standing right.

“We are very concerned,” he said. “We’re seeing problems everywhere but our absolute worst are in those rural areas, particularly in Allegany and Garrett County.”

Hogan said some folks in the local communities apparently had a false sense of security about the virus.

“They maybe weren’t being as careful and not paying as much attention and maybe not wearing masks and not following advice,” he said.

“And now, they’re calling us begging for help and we’re sending strike teams and we’re trying to move patients out of their overflowing hospitals,” Hogan said.

According to the Maryland Department of Health on Tuesday, Garrett County had Maryland’s highest daily COVID-19 positivity rate per jurisdiction at 13.63%, Allegany was second highest at 13.03%, and the statewide average was 6.85%.

MDH reported 2,149 new cases of the disease, which caused 26 more deaths and 61 additional hospitalizations across the state in the past 24 hours.

“Regardless of all the disinformation that’s being spread all over social media, this is not the flu, it’s not fake news, it’s not going to magically disappear just because we’re all tired of it and we want our normal lives back,” Hogan said. “We are in a war right now and the virus is winning.”

To help combat the disease, MDH issued an order that restricts hospital visitations statewide until further notice, with the exceptions of compassionate care, parents or guardians of minors, obstetrics and support for patients with disabilities.

MDH issued guidance to hospitals and other medical facilities to avoid elective procedure admissions that are not urgent or life-saving, if they are likely to require prolonged ventilation, intensive care unit admissions or may have a high probability of requiring hospital care and nursing facilities.

“We do not want Marylanders to put off life-saving treatments or surgeries, but our highest priority right now is preserving capacity at our hospitals so that our doctors and nurses can do their jobs and make sure that people get the right critical life-saving treatment,” Hogan said.

“This will help alleviate the overcrowded hospitals in some areas of our state,” Hogan said.

Hospital capacity across Maryland is up 100% since Nov. 1, he said.

UPMC Western Maryland officials, as well as the Allegany County Health Department, have not answered past questions from the Cumberland Times-News including requests for specific COVID-19 case numbers, patient transfers and infections among staff members. Tuesday evening, a UPMC Western Maryland spokesman said via press release: “Because we are part of a 40-hospital academic medical center, UPMC Western Maryland is working within our system to share resources, transfer patients and manage capacity, and conferring closely with leadership to ensure all needs are met.”

Recent social media posts indicated some local health care workers Saturday traveled in a bus full of people, that were not wearing masks, to a rally that reportedly included thousands of supporters of President Donald Trump in Washington, D.C.

In response, a Facebook post from Rameen Shafiei, director of emergency medicine at UPMC Western Maryland, stated that health care providers that might have been involved in a close gathering without masks will face “a mandatory 14-day quarantine.”

Those employees must also test negative for COVID-19 before they return to work, he wrote.

Masks to be provided

Allegany County will be among jurisdictions to partner with MDH for #MasksOnMaryland mask distribution events.

Each of the jurisdictions will host an event to encourage the use of face coverings in public places by providing free face masks to residents.

“Wearing a mask is an easy way to join the fight and help protect those around you,” MDH Secretary Robert R. Neall said via press release. “I urge all Marylanders to please do the right thing by taking this simple, effective step.”

The Allegany County Health Department will use the new Allegany County Fairgrounds drive-thru COVID-19 testing site as a distribution point for masks from 8 a.m. to 2 p.m. today.