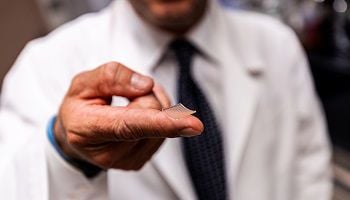 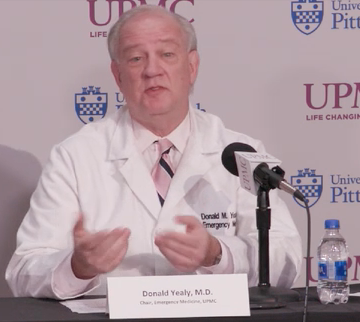 PITTSBURGH — Researchers from UPMC and the University of Pittsburgh on Thursday discussed a potential vaccine for COVID-19.

The virus in February was named "severe acute respiratory syndrome coronavirus 2," or SARS-CoV-2.

Louis Falo, professor and chairman of dermatology at Pitt School of Medicine and UPMC, said a bandage-like patch with micro needles would release a vaccine into the body and produce adequate antibodies to neutralize the virus.

"Less vaccine is needed than a traditional shot," he said and added that the vaccine would be relatively inexpensive and not require refrigeration.

The vaccine would deliver low doses of an antigen and be effective for all age groups, Falo said.

The vaccine has been tested on mice, but must be approved by the Food and Drug Administration before it can be tested on humans. It's unknown how long that process could take.

Testing in patients would typically require at least a year and probably longer.

"It's impossible to give a very precise timeline on when a vaccine would be ready," Falo said.

The mice haven’t been tracked long term yet, but researchers said the animals that got the vaccine produced a sufficient level of antibodies to neutralize the virus for at least a year, and so far the antibody levels of the SARS-CoV-2 vaccinated animals seem to be following the same trend.

“We developed this to build on the original scratch method used to deliver the smallpox vaccine to the skin, but as a high-tech version that is more efficient and reproducible patient to patient,” Falo said. “And it’s actually pretty painless — it feels kind of like Velcro.”

The vaccine study, which appears in The Lancet’s EBioMedicine, is the first peer-reviewed paper describing a candidate vaccine for COVID-19.

Falo said plans would be for the vaccine to be produced at a centralized facility at a rapid rate.

Researchers said the SARS-CoV-2 micro needle vaccine maintains its potency even after being thoroughly sterilized with gamma radiation, which is a key step toward making a product that’s suitable for use in humans.

“We had previous experience on SARS-CoV in 2003 and MERS-CoV in 2014," said co-senior author of the study Andrea Gambotto, associate professor of surgery at the Pitt School of Medicine. "These two viruses, which are closely related to SARS-CoV-2, teach us that a particular protein, called a spike protein, is important for inducing immunity against the virus. We knew exactly where to fight this new virus. That’s why it’s important to fund vaccine research. You never know where the next pandemic will come from.”

Donald Yealy, chairman of the Department of Emergency Medicine at UPMC and University of Pittsburgh, called the study a groundbreaking achievement.

"This is the first coronavirus vaccine candidate in this pandemic to achieve this important milestone," he said.

Yealy also provided an update on the hospital system's testing for the virus.

As of Thursday, across the UPMC system, more than 4,100 COVID-19 tests have been administered, with 386 positive results.

"We do not have complete results back on all the tests that have been (sent to a laboratory) but we have many back," he said. "We currently have 67 inpatients that are positive for COVID-19 across the entire UPMC system. Most do not need intensive care or a ventilator."

Check back at times-news.com as this story is updated.