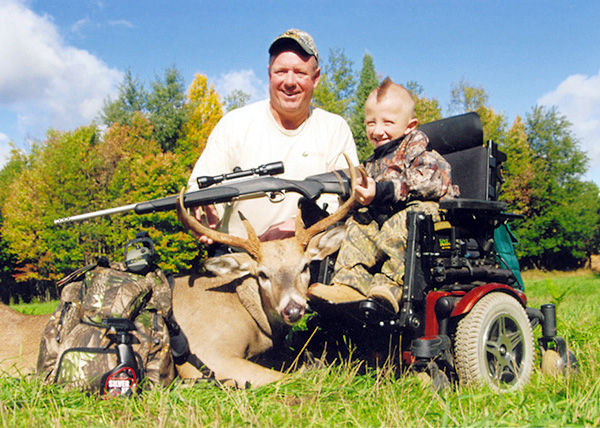 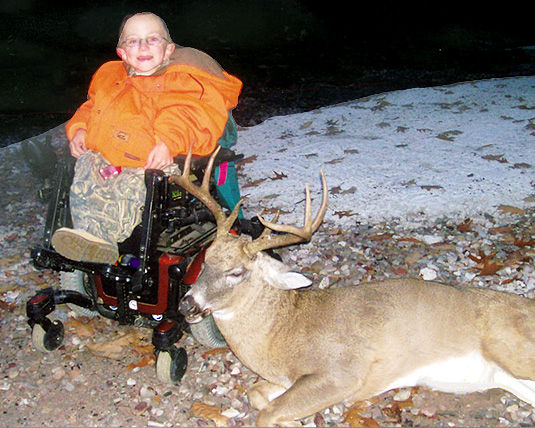 This nice 8-point was taken near Darby's Frostburg home while hunting with his father, Mike.

This nice 8-point was taken near Darby's Frostburg home while hunting with his father, Mike.

FROSTBURG — Dustin Darby bagged two beautiful bucks in 2007, a massive 10-point in Michigan weighing more than 300 pounds and an impressive 8-point not far from his home in Lower Consol. Darby’s success would be considered outstanding for an able-bodied adult, but the 10-year-old has brittle bone disease and needs a lot of help in the woods. He got it. The September Michigan hunt came about by way of the Tony Semple Foundation for Hope. Dustin, his dad, Mike, and his mom, Cindy, were flown to Flint and then took a three-hour bus ride to Fife Lake and the Deer Tracks Ranch. Snippets of the experience are available online at www.wildweekendtv.com. Once there, go to the videos section and click on Tony Semple part one and Tony Semple part two. Mike said three other disabled hunters participated, all males of age 21. “One of them had problems from kidney failure, another one was damaged during a near drowning and the third had genetic problems that incapacitated him,” Mike said. “All of them got nice bucks, but Dustin’s was the largest. Dustin made some really good friends there.” Mike Kelly, a real estate professional from Florida, sponsored three of the four hunters, including Dustin. “They got a call from Ted Nugent while they were there. He told them to whack ’em and stack ’em. It was typical Uncle Ted stuff. They loved it. One of the hunters was a total Ted Nugent fan.” Then on Nov. 24, hunting with Mike near home, Dustin dropped a sweet 8-point buck. Dustin, who has had more than 110 bone fractures, hunts with a .223 caliber rifle modified for him at Bass Pro Shop in Harrisburg, Pa. It has less kick than a .22 caliber rimfire. A year ago, Dustin took his first deer with the firearm while hunting near Rawlings with his friend Mike Griffith, former president of the Allegany-Garrett Sportsmen’s Association. Brittle bone disease is officially called osteogenesis imperfecta. There are 4,000 or so new cases annually in the country. He and his family are very familiar with Shriners Hospital in Philadelphia, including visits during which titanium ribs have been placed into Dustin’s torso to expand his chest so that his lungs and heart have room to function. Dustin’s deer hunting success has been remarkable during the past two seasons. Additional walls may soon be required at the Darby household. Contact Michael A. Sawyers at msawyers@times-news.com.