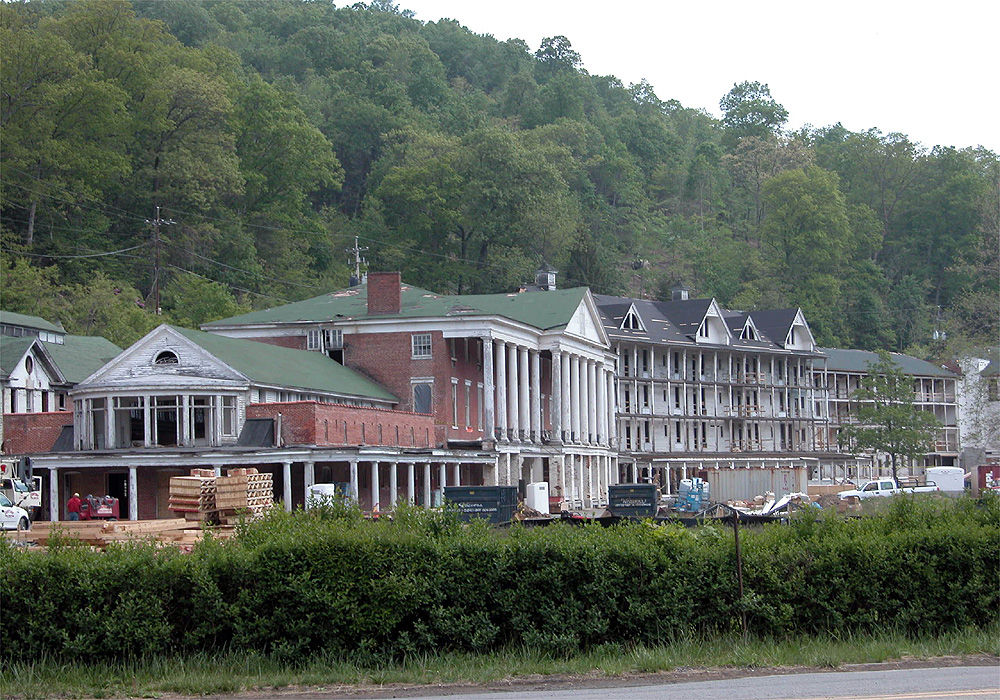 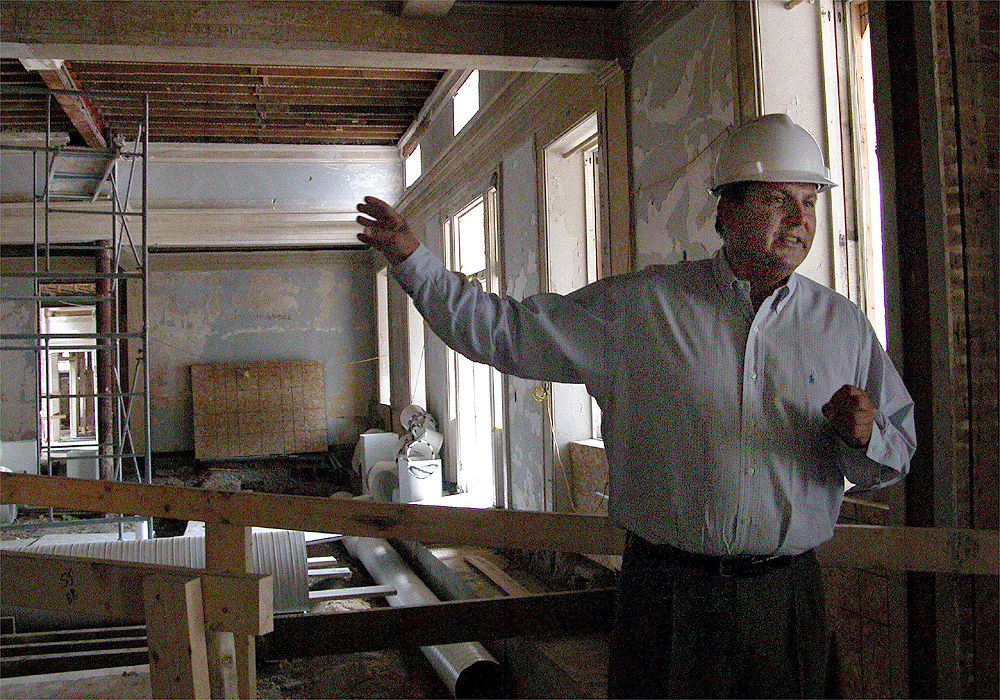 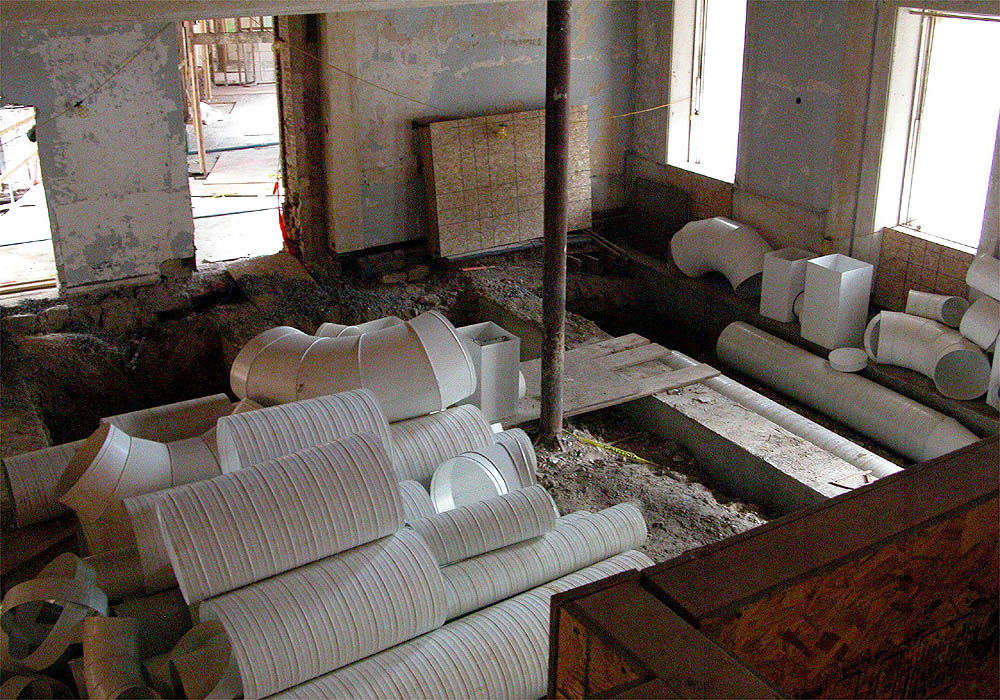 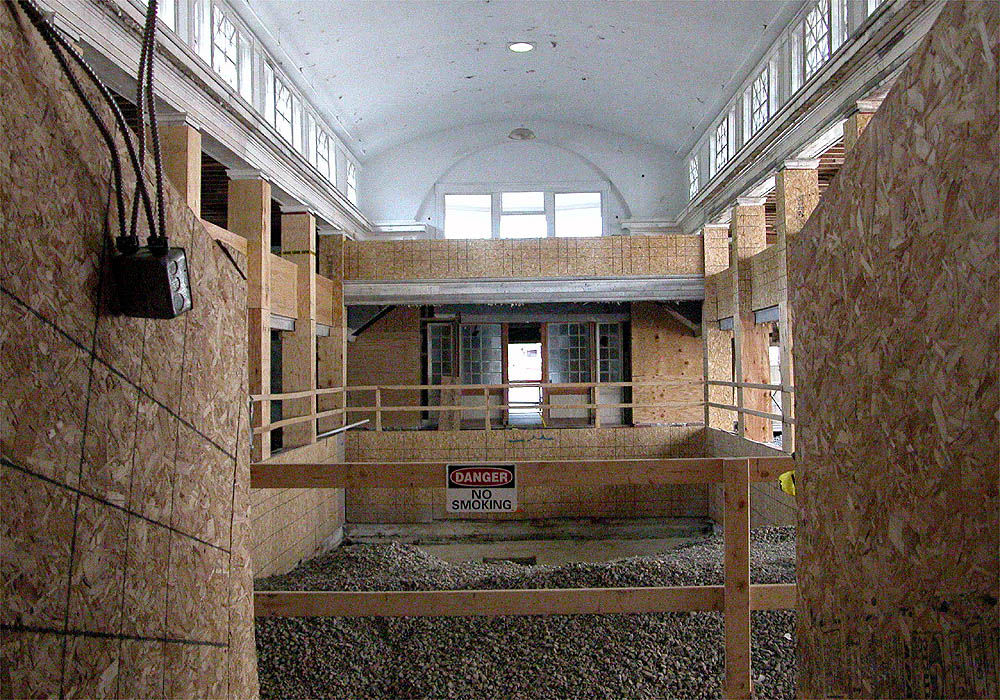 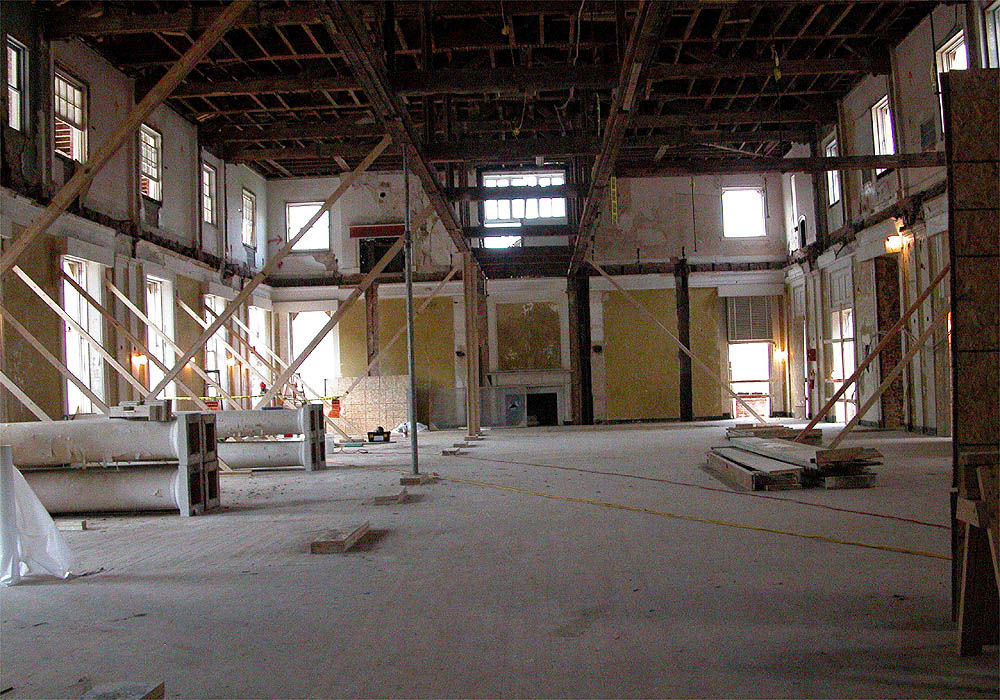 BEDFORD SPRINGS, Pa. — A beehive of activity around the once grand resort in Bedford Springs slowly but surely is bringing the hollowed-out structures to their former glory. “It is a restoration, not a renovation,” said Todd Gillespie, marketing and sales director with Benchmark Hospitality, the hotel/resort management company that will operate the Bedford Springs Hotel when the historic landmark reopens next year. Owners Mark Langdale and Keith Evans, both of Dallas, have focused on the history of the hotel, which attracted their original interest, said Langdale last fall when the announcement was made the resort would be restored and re-opened to the public at a projected cost of more than $100 million. Langdale said that he became interested because “it is pretty rare to find such a unique property that is such an important part of American history.” Evans said Wednesday that everyone working on the project seems to recognize the history of the place as well as their role in reviving it to its former glory. “There are just not many of these old ladies left,” he said of the hotel. “Everyone working on the project knows it’s something special and something they can bring their children and grandchildren to see and say they helped bring her back to life.” “We are right on schedule,” said Gillespie, who is the on-site person for Benchmark. “We will be employing a general manager within the next three weeks.” Gillespie, who assumed his duties at the historic hotel in April, said Three North of Richmond, Va., is the architect on the project. The general contractor is R.T. Reynolds Inc. of Harrisburg. “By next year, the hotel will have been restored to the way it was in 1905, but with all the amenities of today,” he said. Some of those amenities include full wireless service as well as the latest in flat-screen televisions in each room, hidden inside period furniture. Gillespie said the company has researched the history of the hotel and is making every effort to ensure its authenticity to the early 20th century. The resort, however, is much older. Gillespie said the site with its seven mineral springs was discovered in 1798. He said the stories about the hotel, its visitors, the springs and the area seem unending. “The Native Americans shared the waters of the springs with the first people to come to this area,” he said. “There is the magnesium spring, which, along with the bridge across the roadway, is going to be restored, as well as the Greek temple with a rock wall and lion’s head.” Gillespie said that other springs are located nearby, and the structures that protected them, mostly open gazebos, will be restored. “The sweet spring is the one the hotel is built over,” he said, adding that it was sealed off in the mid 20th century. He said the first of the original six buildings was the Stone House, built in 1805 by Dr. John Anderson who owned the property. “It is going to include a frontier tavern from that period as well when it is fully restored,” Gillespie said. As work has progressed on the structures, they have found such things as gun ports where early settlers defended themselves and racks where hides were hung to dry. Most of the original buildings, which include several different types of architecture, have been gutted. Evans said that the Anderson building, the guest room portion farthest east of the project, already has new roof shingles and the interior work is progressing with the utilities in place as wallboard is being put up. Gillespie said that a drive will circle in front of the hotel much as it did in by-gone days with a landscaped garden in front offering a serene atmosphere as visitors and guests walk to the various springs and taste the waters. “It will be valet parking only,” he said. “The road (the Bedford Business route of U.S. Route 220) will be rerouted to the back of the hotel,” he said, noting that will reduce traffic noises and add to the atmosphere and timelessness of the front lawn area. The 1905 pool house, with the first Olympic-size indoor swimming pool, is also being restored. Throughout the hotel, major architectural features such as bannisters, railings, door frames and other woodwork are protected with fiberboard or other materials as they are restored. “The white tiles in the pool will be polished and restored to their original luster,” Gillespie said, noting the pool is also spring-fed. In another part of the Main Building, a mahogany-paneled conference room is being restored and will be one of the small meeting room spaces in the facility. “This room will have a large mahogany conference table and can be used for smaller groups,” he said. In addition to the Grand Ballroom there will be three restaurants, the Crystal Room, the main dining room and the tavern in the Stone House. “We are going to have open kitchens,” Gillespie said of some of the restaurant spaces. A large dining area with an open kitchen and a “chef’s table” will be featured in a building located behind the pool house. The wine cellar is to be located below the room. “The guest rooms are expected to be completed by December and that’s when we’ll start furnishing them using the period colors, wallpapers and furnishings we researched for the era,” said Gillespie. “About 60 percent of the guest rooms will feature king beds. Other rooms will have two queen-size beds.” Suites that include a separate parlor area also will be available. About 120 rooms are under restoration. The rooms in the front of the three-story wooden sections of the hotel will have a door to the porch that extends across the exteriors on each floor. “Outside each door there will be two rocking chairs and guests will be able to overlook the lawn and gardens in front of the hotel just as they did in 1905,” Gillespie said. Mona Ridder can be reached at mridder@times-news.com.