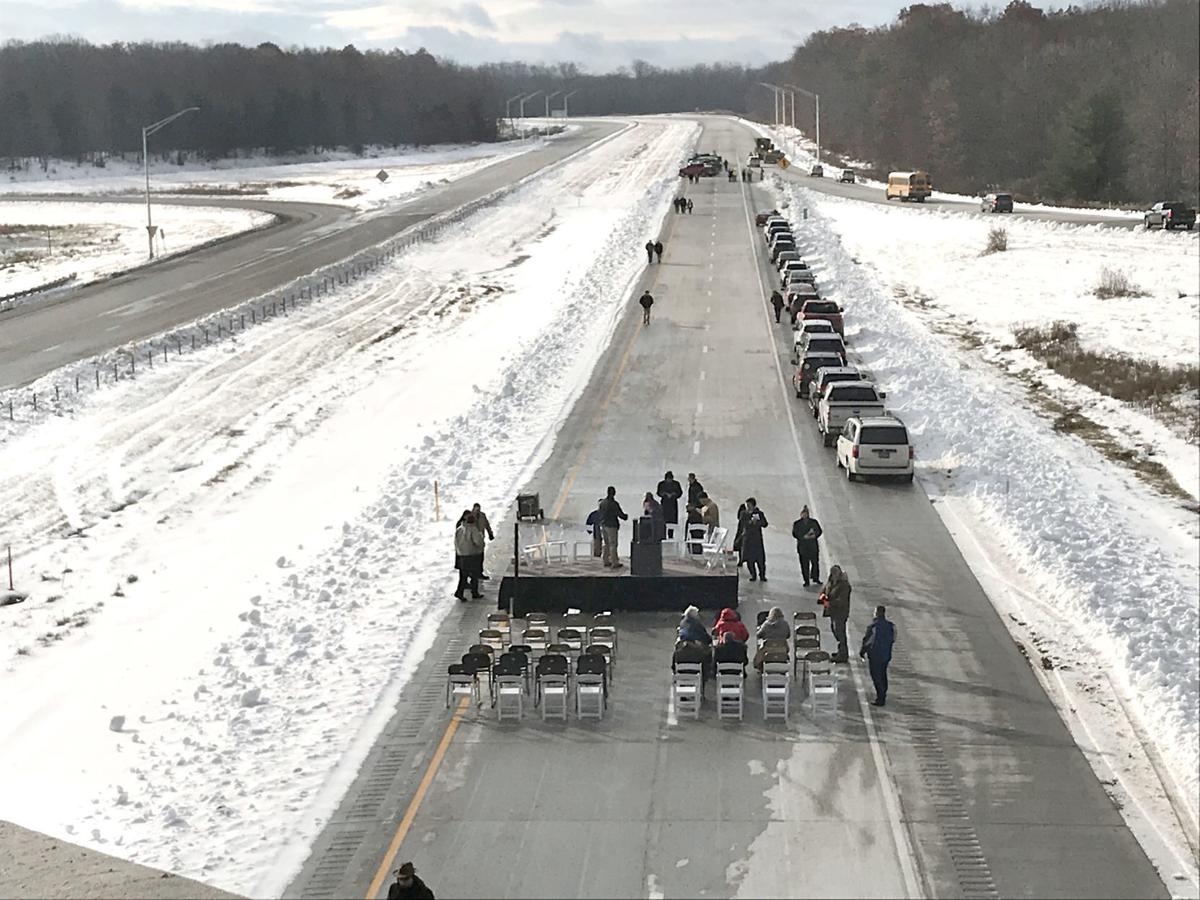 Local leaders line Route 219 in Somerset on Wednesday, Nov. 21, 2018, for the opening of an 11-mile extension between Somerset and Meyersdale. The $330 million project has been in the works for years. 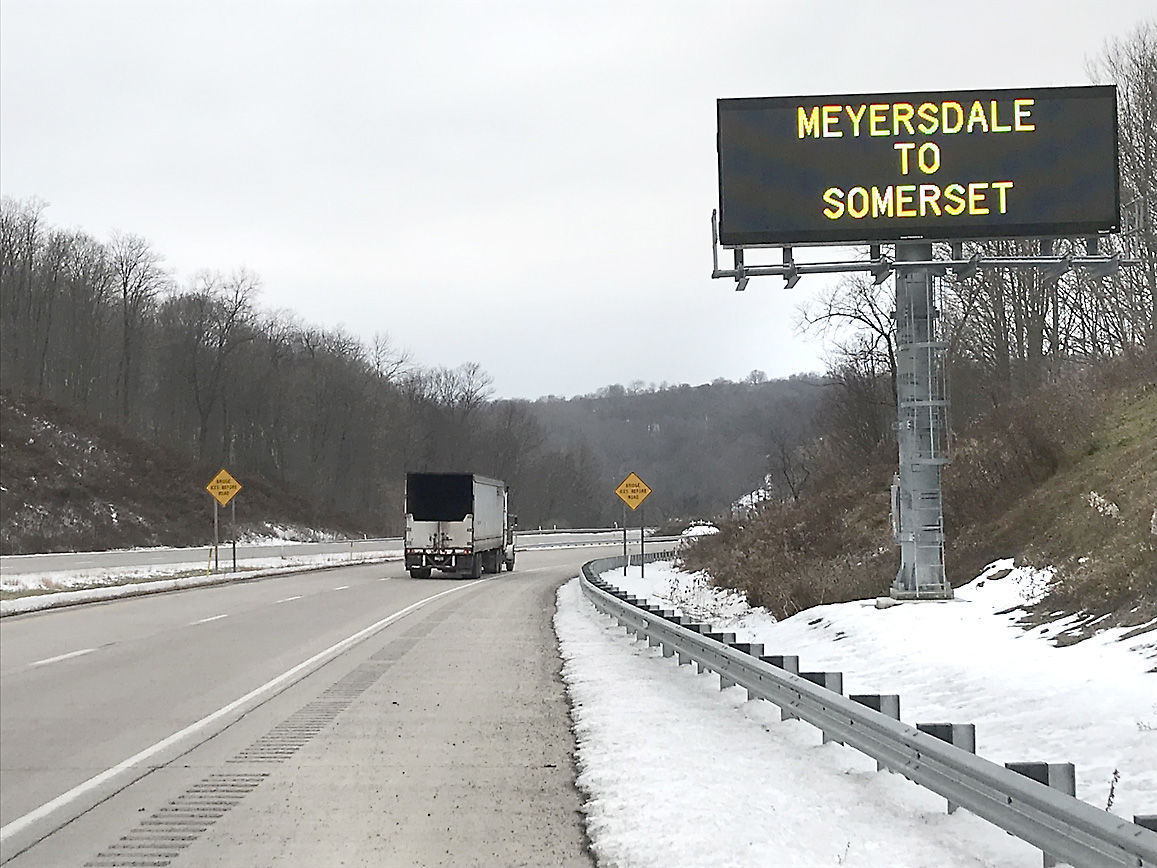 A truck passes a sign on Route 219 on Wednesday, Nov. 21, 2018, announcing that the 11-mile section between Meyersdale and Somerset is now open.

SOMERSET, Pa. — Frigid air and biting winds greeting those attending the Route 219 extension ribbon cutting may have been appropriate, highway advocate G. Henry Cook of Somerset said after the program.

Cook is CEO and Chairman of Somerset Trust Co. and has been promoting completion of the Route 219 four-lanes for decades.

It hasn’t been easy, Cook and other leaders said during Wednesday’s program, held on the southbound lanes just south of Somerset. He recalled a former state transportation secretary who was not in favor of the investment.

“He said it would be a cold day in hell when this was built,” Cook said on Wednesday.

Cook said it was a community effort to see the $330 million project that led to Wednesday’s opening of the 11-mile connection between Somerset and Meyersdale, but he and others at the ceremony said more needs to be done.

Local leaders are pushing for the construction of another 5.5 miles of limited access, four-lane highway to the Maryland border. The neighboring state has already secured funding for its connection to Interstate 68.

“This is the culmination of a lot years of hard work by good citizens and elected officials,” Cook said. “This is a real victory for Somerset County.”

U.S. Rep. Bill Shuster, R-Hollidaysburg, said he learned the project’s importance soon after he first took office in 2001, and he took pride in securing the $269 million highway funds to pay all the construction costs.

“That’s your tax dollars coming back to Somerset County, coming back to Pennsylvania to do good things, because this is more than just a road,” Shuster said. “It’s a way forward for this county and for this region. We have to make sure that we work hard and be vigilant to continue the work that needs to be done.”

Shuster said he spent so much time on the project he felt like he had “Route 219” tattooed on his forehead.

Shuster did not seek re-election. He urged elected officials, including incoming Rep. John Joyce, to press forward on the completion. He warned Joyce that the tattoo is also being transferred.

“Believe me, John, when you look in the mirror, it’s going to be there,” Shuster said.

State Transportation Secretary Leslie S. Richards stressed the importance of the project for economic development and praised local advocates for their perseverance.

Gov. Tom Wolf’s administration has recognized the value of local partnerships and last year created PennDOT Connects, a new approach that expands the PennDOT’s requirements for engaging local and planning partners by requiring collaboration with stakeholders before project scopes are developed.

“Local input is vital to delivering a project that leaves a community in a better position than it was before we started,” Richards said.

Former state Sen. John Wozniak, of Westmont, recalled a point when it looked like the extension would not be built.

The federal government funding was available, but it would require $54 million state funding for design and environmental studies, Wozniak recalled. The only state funds available were already earmarked for a project in northeastern Pennsylvania in the senate district of the late Roger Allen Madigan.

Wozniak said he and a bipartisan group of other state officials pressed for the funds.

“We went to his office and begged, pleaded and cajoled,” Wozniak recalled. “He acquiesced.  Congressman Shuster brought the rest of that (federal) money down. The rest of the story is right in front of you now.”

The new highway cuts the trip from Somerset to Meyersdale to less than 15 minutes and brings travelers within 10 miles of the Interstate 68 interchange near Grantsville, Maryland.

Local officials envision a corridor that connects Interstate 68 with the Pennsylvania Turnpike.

Randy Griffith is a multimedia reporter for The Tribune-Democrat. He can be reached at 532-5057. Follow him on Twitter @PhotoGriffer57.