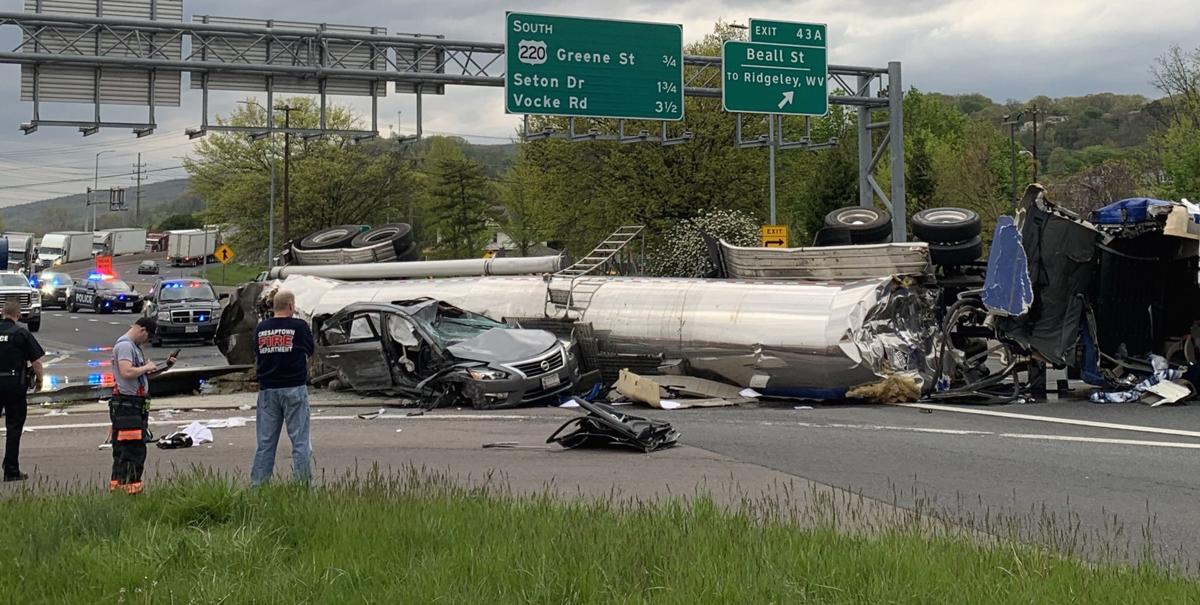 CUMBERLAND — The eastbound lanes of Interstate 68 reopened about 11:20 a.m. Thursday, some 16 hours after a traffic accident involving a tanker truck, compact car and a tractor-trailer killed a city man.

Cumberland Police said Wendell Johnson, 62, a passenger in the car, was pronounced dead at UPMC Western Maryland following the 5:15 p.m. accident at the Johnson Street exit.

Another person in the vehicle was critically hurt, one suffered minor injuries and two refused treatment, police said. Both truck drivers were uninjured.

Crews from Maryland's State Highway Administration and Hepaco, an emergency response firm from Hagerstown that specializes in environmental remediation, spent the night cleaning up an industrial cleaning product spilled by the tanker truck. That spill caused the area around the crash scene to be temporary evacuated.

"The semi truck failed to negotiate a turn and collided with the passenger car and a second semi truck," according to the release. "Excessive speed does appear to be a factor in the crash."

Criminal and traffic charges against Lewis were pending, police said.

The second truck was owned by CRST Transport and driven by Ray Walker of Arizona.

The driver’s side of the car was pinned under the tanker truck. The second tractor-trailer was pulled to a stop just east of the accident scene.

"The crash scene extended for approximately half a mile along the interstate," said Capt. Chuck Ternent, who's been selected to be the city department's next police chief. "The seriousness of the crash coupled with the entire roadway being blocked and the hazardous material spill made it a challenge for first responders."

The city police department was aided by the Allegany County Sheriff’s Office and Maryland State Police.

In addition to Cumberland Fire Department, ambulances from Cresaptown, LaVale and Corriganville responded, as did an Allegany Department of Emergency Services supervisor.