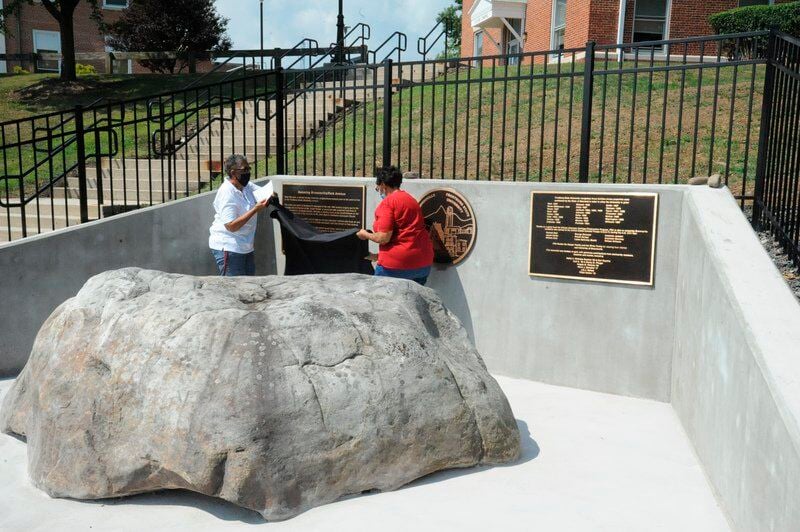 Janet Jackson and Anita Peck unveil a monument to the community of Brownsville/Park Avenue on the Frostburg State University campus on Tuesday, Aug. 25, 2020. 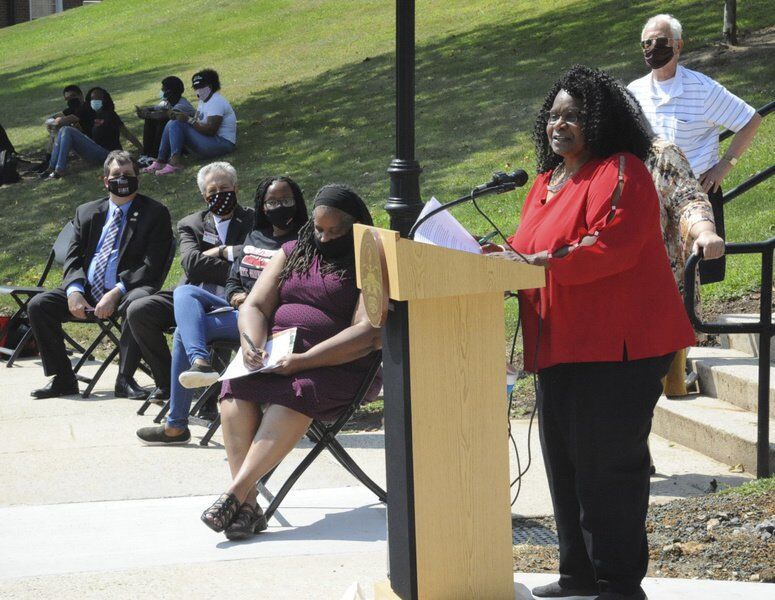 Carmen Jackson, president of the Allegany County NAACP speaks during the dedication ceremony for a monument to the community of Brownsville/Park Avenue on the campus of Frostburg State University on Tuesday afternoon. The community of freed Black people was displaced to make way for the expansion of the university. Jackson said, “Frostburg, remember this day. No matter how we got here, we can move forward together.”

Janet Jackson and Anita Peck unveil a monument to the community of Brownsville/Park Avenue on the Frostburg State University campus on Tuesday, Aug. 25, 2020.

Carmen Jackson, president of the Allegany County NAACP speaks during the dedication ceremony for a monument to the community of Brownsville/Park Avenue on the campus of Frostburg State University on Tuesday afternoon. The community of freed Black people was displaced to make way for the expansion of the university. Jackson said, “Frostburg, remember this day. No matter how we got here, we can move forward together.”

FROSTBURG — Lance Jackson Sr. stood on ground rooted deep in his lineage and asked God to “bless the families that were displaced by the growth of this university.”

Jackson was among a crowd of people, spaced apart from each other due to COVID-19, at Frostburg State University’s campus Tuesday for the dedication of a monument to an area and era that marks sacrifice, racial injustice and an example of how to overcome inequities with strength, grace and hard work.

Brownsville/Park Avenue was a community of freed Black people that lived where FSU’s campus is today.

“I am a descendant of Brownsville,” Jackson, a Frostburg native and resident, said.

According to the book “Being Black in Brownsville — Echoes of a ‘Forgotten’ Frostburg” by local historian Lynn Bowman, author of multiple books on African American history, members of the community were forced to sell their houses for $10 to make way for the expansion of Frostburg State College, which is now FSU.

Jackson’s parents never talked much about what had happened to them, he told the Cumberland Times-News last year.

“Mom always said she was trying to forget 'that kind of stuff.’ She was referring to being put down and taking menial work because of the color of her skin,” he said at that time. “It's important to know about the lives that were disturbed and the struggle we had to go through to rebuild our lives after that … I saw my dad work three jobs to meet the mortgage on McCulloh Street after he lost his house on Park Avenue, which the family had fully owned (with no mortgage) for at least two generations.”

“We have been working our way to this day for more than a decade and it is one for the history books,” she said. “May we always honor and lift up the legacy of those individuals whose shoulders we stand on today.”

FSU President Ronald Nowaczyk talked of the university’s history, which started as a small school with 57 local students, changed names multiple times and expanded over the years.

“The growth is evident today in the number and diversity of students, faculty and staff,” he said.

However, that growth came at a cost.

“It displaced several communities that were there, here in this location, and scattered the residents,” Nowaczyk said.

The Brownsville/Park Avenue communities were “home to primarily African Americans living in Frostburg,” he said.

“The loss of these communities and the distress it caused for residents is a sacrifice that is difficult for us to comprehend today, especially for those of us who have seldom, if ever, faced discrimination,” Nowaczyk said. “We all need to better understand the contributions these communities made to make Frostburg State University and this region what it is today.”

He said he wants to use technology “to bring the history of Brownsville and Park Avenue alive for the community and visitors to campus so that they can learn more beyond visiting the monument.”

FSU also commissioned a group of students, faculty and others to develop plans for the future use of the Lincoln School — a one room schoolhouse built for Brownsville students that couldn’t attend other area schools because of segregation — as a community cultural center, Nowaczyk said.

Lyric Mitchell, diversity, equity and inclusion chairwoman for FSU’s Student Government Association, talked of the monument as a reminder of sacrifices made by Brownsville residents.

“Without Brownsville we wouldn’t be Frostburg,” she said.

Frostburg Mayor Robert Flanigan talked of residents that were displaced for the expansion of FSU.

“It was a movement towards economic development for the community,” he said.

Brownsville descendant Tifani Fisher, vice president of the Allegany County NAACP, said she could feel the pride her ancestors would have in the community for moving forward.

“I’ve been asked a lot over the past few months how we change racism,” she said. “We start first from acknowledging the wrongdoings and learning from each other about our history … because the only way we can move forward is if we own what happened in our past.”

Carmen Jackson, president of the Allegany County NAACP and Lance Jackson’s wife, said the dedication marked a milestone for the people of Brownsville and Park Avenue.

“My father-in-law Raymond Jackson … was a Navy veteran of World War II,” she said. “We have many African American men in our community that have served in the military … They gave to this country.”

The Jackson family has always been strong and proud, she said.

“We came from a stock of people who chose to survive,” Carmen Jackson said.

She also thanked Nowaczyk and Bowman for “unveiling the ugly truth” by sharing Brownsville’s history.

“(They) have made a difference to bring us to this day,” Carmen Jackson said.

“Frostburg, remember this day,” she said. “No matter how we got here, we can move forward together.”

The interactive theater piece promoted discussions to highlight and uncover the social impact on the lives of Brownsville descendants and Western Maryland residents.

As a Brownsville descendant, Clory Jackson said she created the project to help people uncover and heal from suppressed history.

On Tuesday, she posted a comment on the Frostburg State University Alumni Association’s Facebook page, which livestreamed the monument dedication.

“Students, faculty/staff, and alumni worked very hard to have this monument come to fruition,” Clory Jackson stated. “The Brownsville Project is proud of their perseverance as this effort pre-dates the formation of our organization. There is still work to do.”

FSU Chaplain Cynthia Zirlott said folks should remember with gratitude what happened to the people of Brownsville and Park Avenue.

“A blessed community of peace and love can exist in this world,” she said.

WESTERNPORT — Janet Louise Martin of Westernport passed away Wednesday, Sept. 22, 2021. There will be visitation at Boal Funeral Home, Westernport, Monday, Sept. 27, 2021, from 11:30 a.m. to 12:30 p.m. Mass of Christian Burial will be after visitation at Divine Mercy Parish St. Peter Catholi…