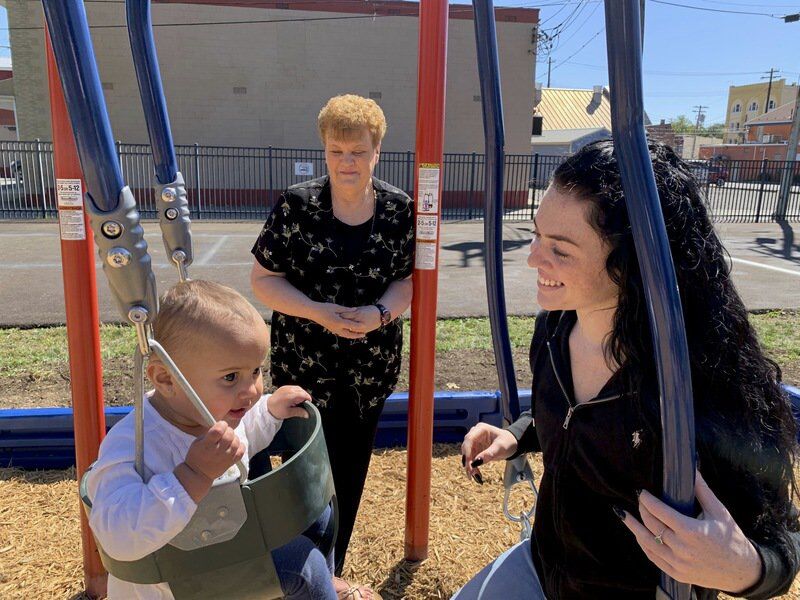 Kellsea Ault swings her 1-year-old daughter Khloe at the newly restored Centre Street Playground as Deborah Ault, Kellsea’s grandmother, looks on. CityReach Church restored the playground over the summer and will hold a grand opening Friday from 5-6:30 p.m. 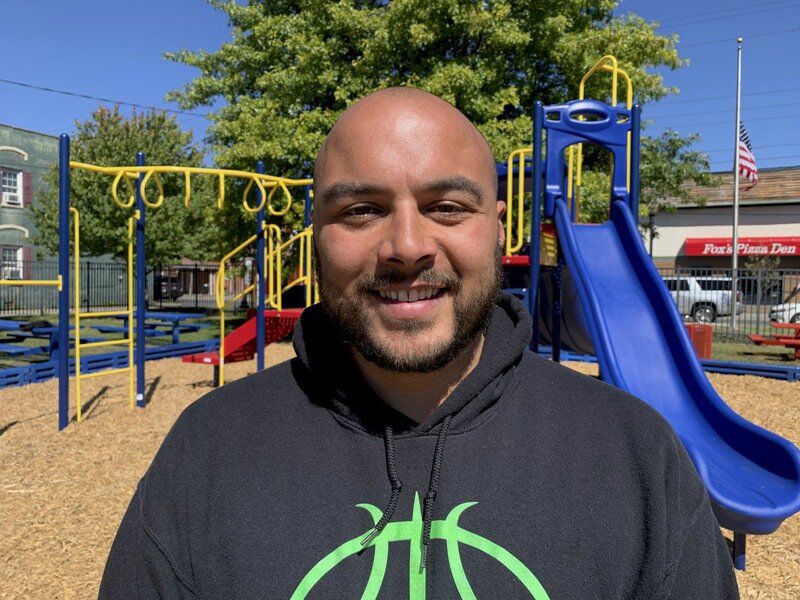 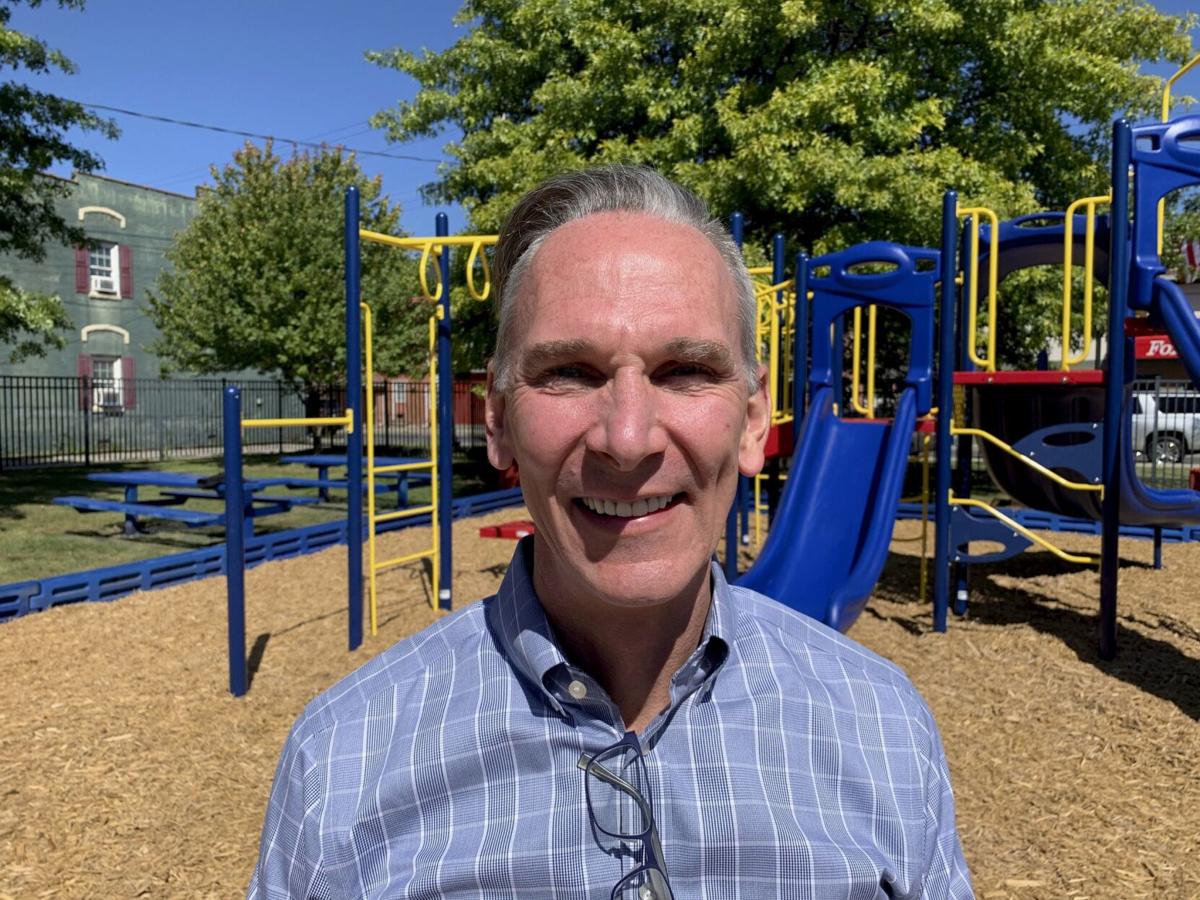 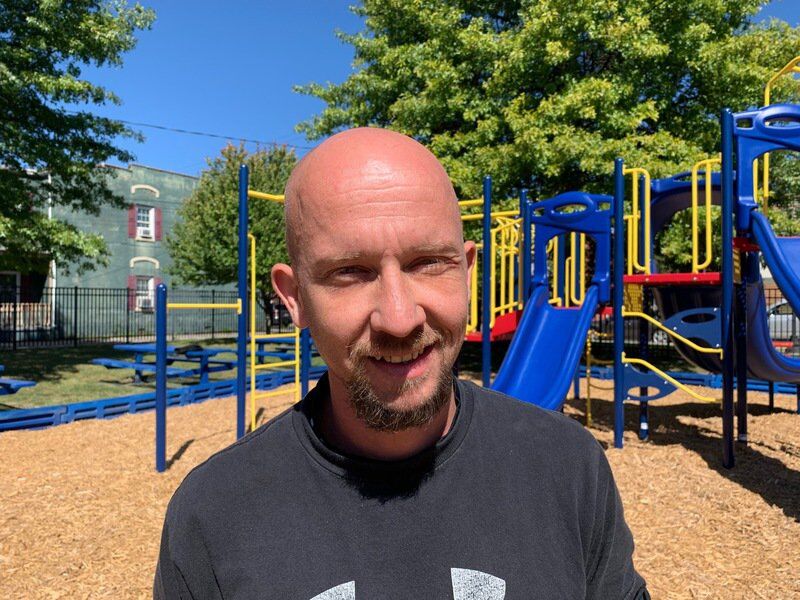 Kellsea Ault swings her 1-year-old daughter Khloe at the newly restored Centre Street Playground as Deborah Ault, Kellsea’s grandmother, looks on. CityReach Church restored the playground over the summer and will hold a grand opening Friday from 5-6:30 p.m.

CUMBERLAND — It was 21 years ago when then 4-year-old Kellsea Ault sat in a swing at the Centre Street Playground while her grandfather gently guided her back and forth.

It was the kind of day special memories are made of.

The year was 1999, and a photo of Kellsea with her grandfather Gary Ault appeared in “Bright Ideas,” a regional newsletter published by the NeighborWorks Network. The occasion was a celebration of the playground, which had been renovated that summer.

In fact, it was Gary Ault, the executive director of Cumberland Neighborhood Housing Services at the time, who was instrumental in cobbling together the donations and grants that made the $90,000 playground restoration project possible.

Time passed and the Ault family was left with the memories, and in this case, a photograph in a newsletter. Over time, the Centre Street Playground began to deteriorate. Trash and bottles began to pile up, equipment failed, paraphernalia littered the ground and weeds grew. The playground Gary Ault adorned with the slogan “Smiling faces, happy places” became abandoned and looked more like an empty lot.

But thanks to a local church, the playground has been given a chance to rise again.

It so happened the church leaders began looking for another project this summer, and this time wanted to help restore a playground. After considering a few sites, the decision was made to select the Centre Street site.

Church leaders didn’t know at the time the Ault family, who were members of the congregation, were connected to the playground. CityReach Church member Jay Daniels, Kellsea’s boyfriend, told the Ault family of the decision. Deborah Ault, Kellsea’s grandmother, retrieved the 1999 photo from her drawer and showed the family. Daniels shared the photo with church leaders David Smith, Phil Kifer and Pastor Fred Timbrook, who were surprised to learn of the connection to the Aults.

“When it all came together, we didn’t know,” said Timbrook. “The story is wonderful and it’s kind of cool that Kellsea and the family come to our church.”

Smith, Timbrook and Kifer, along with Deborah Ault, Daniels and Kellsea and her children came to the Centre Street Playground on Monday to see the progress. The playground equipment has been replaced, the grass mowed and landscaped, the picnic tables, benches and trash cans have been refurbished and painted. The restoration also included the addition of a full-length basketball court on new blacktop.

Deborah Ault was overcome with emotion to see the playground her husband loved.

“It is very good because he loved this place,” said Deborah, with tears streaming. “He would be so proud ... to see this place back again. It was an empty lot ... and now look.”

Smith said the city of Cumberland granted permission for the church to restore the playground. Smith credits Kifer for the suggestion.

“It starts with Phil,” said Smith. “We had to figure out how to redo ministry and outreach due to COVID. We were having monthly meetings and Phil Kifer suggested a playground. Everybody around the table agreed and we just rolled from there. It didn’t take a lot of effort to convince everybody to do it so here we are.”

“It made my heart so happy,” said Kellsea, who got to swing with her 1-year-old, Khloe. “I think it is a good place for kids to come and get them off the street. Before, kids could hurt themselves here; now it’s a safe place for them to come.”

“We’re sticking kids too much into video games and social media,” he said. “So we think it can help to do something outside with our children. The biggest thing I want to see is children have a place to come to where they know they are safe and able to enjoy their life and smile and laugh.”

Smith said the church will hold activities each month at the playground.

“We are all about reaching people in overlooked places and a playground like this is definitely overlooked,” said Smith. “So if we can get back to a time where we are raising kids together and helping others to help steer their kids, we can change the outcome for Cumberland in general.”

Timbrook added, “We love to do this. It is the heartbeat of our church. We look for what we can do to get out of the church and help in the community.”

The church will sponsor a grand opening on Friday from 5 to 6:30 p.m. with food and beverages available. The public is welcome to attend.

CUMBERLAND - Dorothy Jean Jackson, 79, of Cumberland, died Wednesday, Oct. 14, 2020, at UPMC-Western Maryland. Born June 29, 1941, in Cumberland, she was the daughter of the late Leland Carl Malone Sr. and Jean (Keller) Malone. She was also preceded in death by her husband, Charles Jackson; …