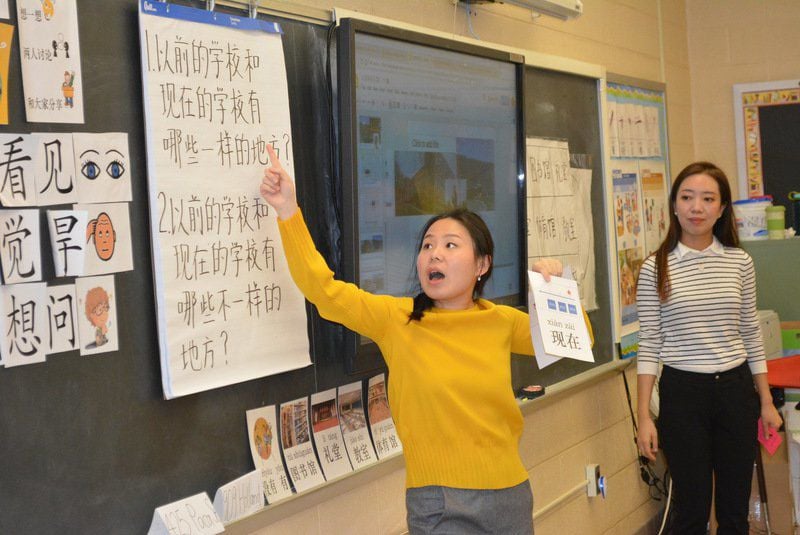 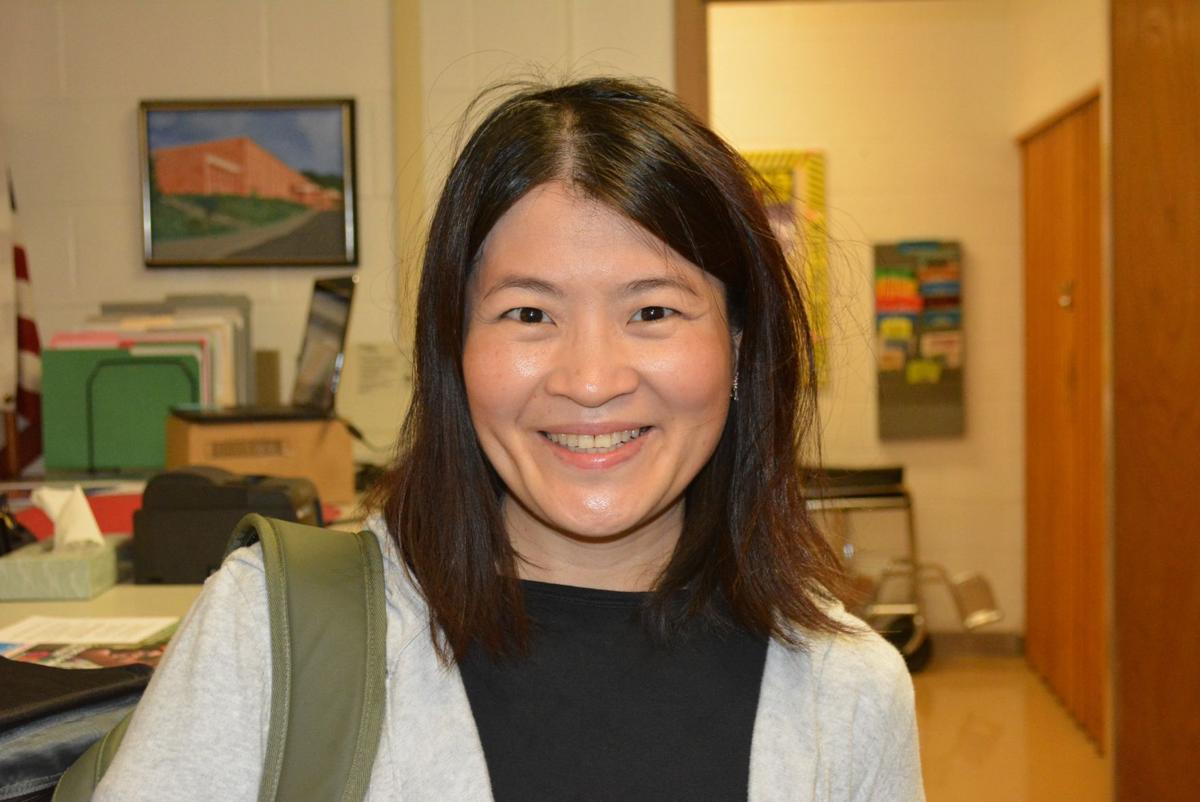 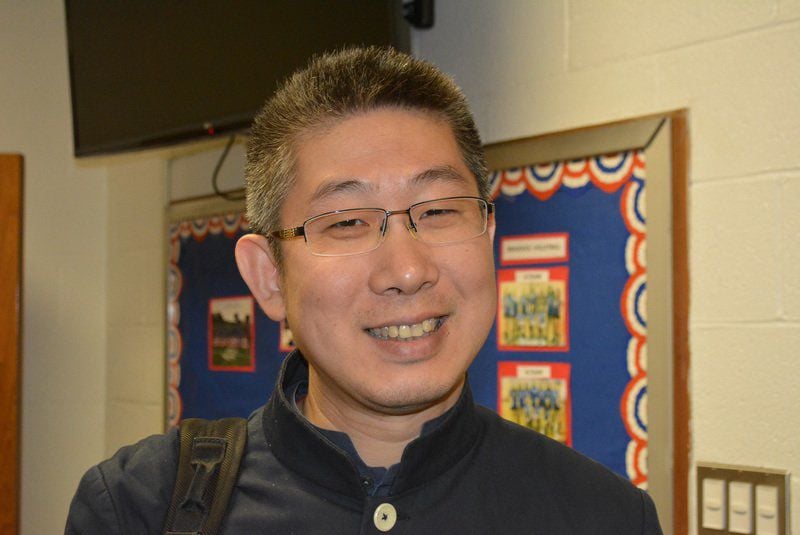 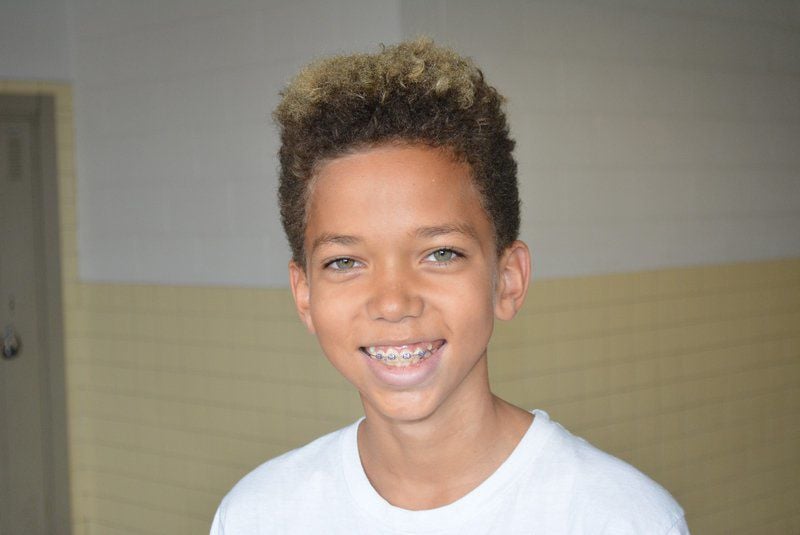 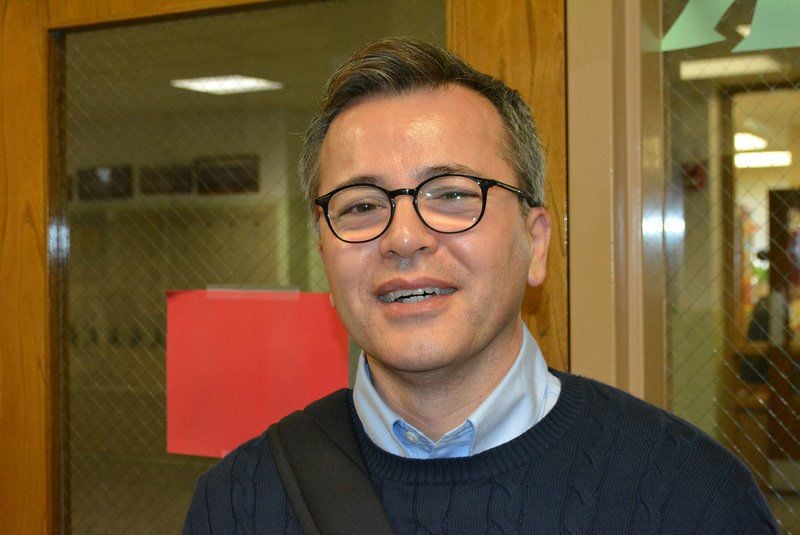 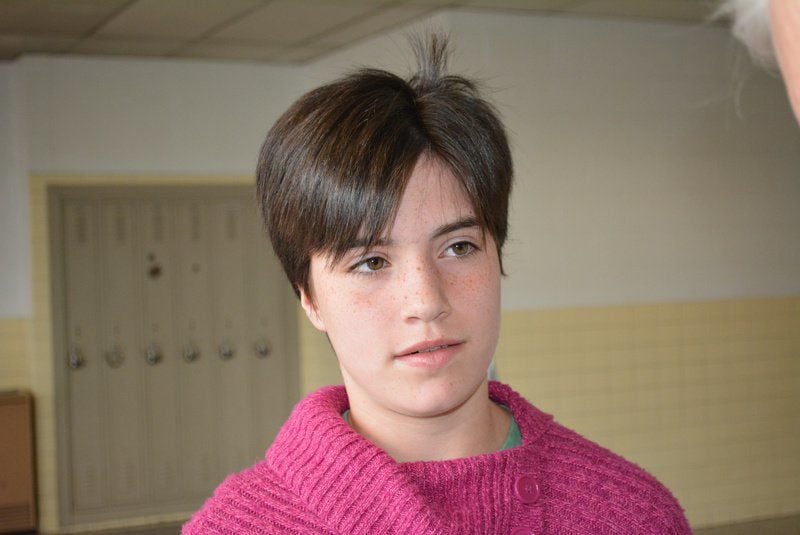 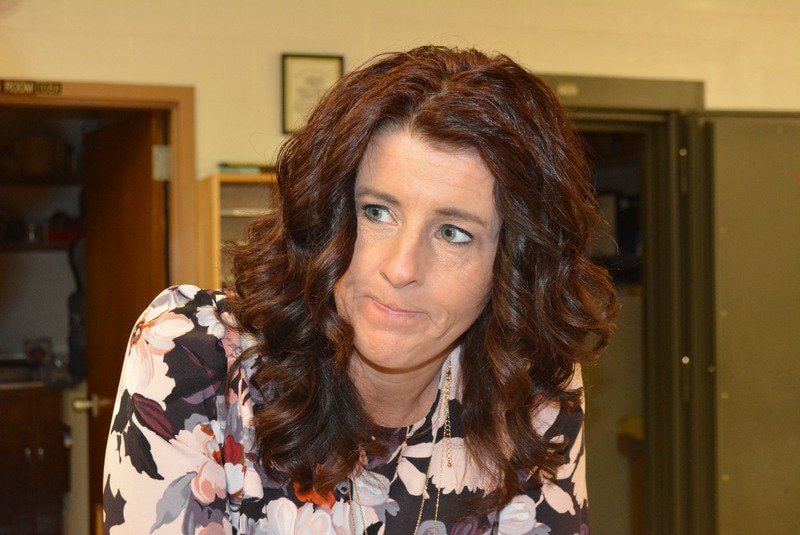 “We visit mostly charter and independent schools every month, mostly on the West Coast and in New England,” said Paul O'Sullivan, the marketing director of HD Schools.

O’Sullivan and Jasper Pan, HD Schools' CEO, were accompanied by Pearl You, a dual languages program consultant contracted by the Allegany County Board of Education for its Chinese Immersion Program.

More than 140 students from kindergarten through sixth grade are enrolled in the program at the West Side School and, for the first time this year, at Braddock Middle School.

“This is our first transition of the program to the middle school,” Braddock Principal Molly Stewart said.

“It’s a regional program involving students from all over the county that are selected through a lottery of applicants,” she said.

Enrolled students rely on their parents for transportation to and from school.

Twenty students were being instructed by Wanlin Du, lead teacher in the county program and guest teacher Hao Cai when O’Sullivan and Pan visited them Tuesday morning.

“We should be celebrating that Allegany County provides this opportunity for our students," Stewart said.

The program is reportedly only offered elsewhere in Maryland in Montgomery and Prince Georges counties and one private school in suburban Maryland.

Anna Hilderbrand has been enrolled in the program since kindergarten.

“This is a good experience. I like going places with my family to put the Chinese that I learn into real-life experiences,” the sixth-grader said.

“It’s been really awesome," he said. "I’ve been learning math in Chinese and it changes your perspective. Learning opens you up to new worlds.

“Me and my dad spent 10 days in China last March visiting different cities and my mom and I went to Philadelphia through the Chinese Immersion Program,” he said.

“Parents recognize the value of this opportunity. They want to see success for their children and it’s a whole family commitment,” Stewart said.

Melinda Thoele is one of those parents. Her son, Jude, entered the program in its pilot year as a kindergartner at West Side. He's now in the sixth grade at Braddock.

"We jumped at the opportunity to enroll Jude in the program," Thoele said. "The Chinese program has provided Jude with an enriching educational environment that will serve him throughout his life.

"Jude has thrived is this learning environment. He is an excellent student and we attribute a portion of his success to his participation in the Chinese immersion program. We are very grateful to the county and the school district for providing our son with such a world class education," Thoele said.

Kristin Morton's daughter is also a sixth-grader at Braddock.

"This program has wowed me since its inception," she said. "Choosing it was an easy decision for her father and me because we understood the educational value of developing an early foundation in a language other than our own.

"The fact that the language was Mandarin added to our interest because there are so few programs in our country that offer this education to children and we understood that language fluency would open select doors for our daughter’s future, and broaden her options as she grows in fluency.

The program began in 2011 through a Race to the Top grant from the U.S. Department of Education through the state of Maryland.

It follows the same school curriculum for all students with Chinese immersion students instructed in the Mandarin language. At West Side, students in the program are taught in Mandarin in language, mathematics and science. At Braddock, there are no math and science components and the focus is placed on reading and writing in Mandarin.

Stewart said there are plans to expand the program to the high school level in a few years.

"Our goal is for our students in the program to have 18 hours credit for college upon graduation from high school," she said. "We are looking to partner with Frostburg State University."

Pearl You said Chinese immersion programs have increased in the U.S. in the last 10 years. She said about 250 schools nationwide offer the programs.

The Washington, D.C., consultant spent 19 years in the bilingual language education field both as a teacher and an an administrator.

"We found that students in Chinese immersion programs tend to be more caring and empathetic. They are curious about something new. They want to take risks and explore new things and they tend to be more creative," You said.

More information on the Chinese immersion program is available at https://www.acpsmd.org/Page/468.

UPDATE, 4 p.m.: The National Weather Service issued a Winter Storm Watch that is in effect from late Wednesday night through Thursday night an…