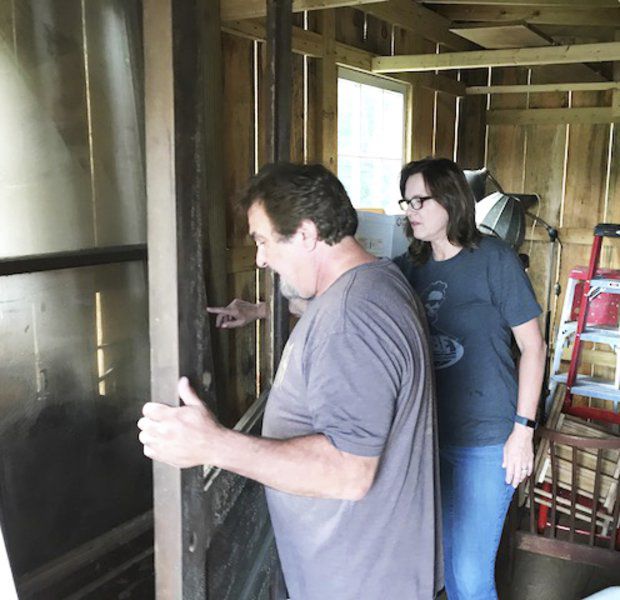 The Cornwells look over some of the rare and antique farm and home parts they have accumulated. The collectibles will be used as decoration for the craft beer brewery. 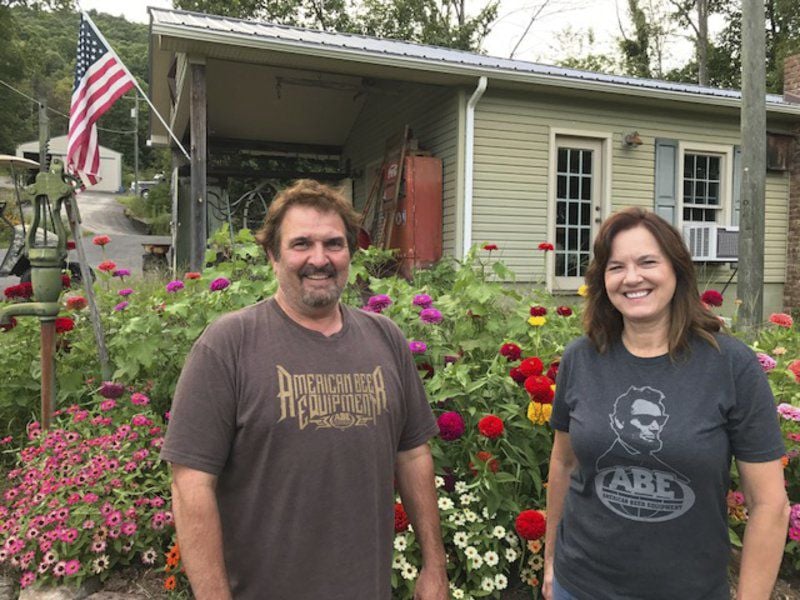 Tony and Denise Cornwell take a break in front of one of the outbuildings on their Lavender and Hops Farm in Little Orleans. The buildings contain hundreds of vintage home, farm and auto parts to use in decorating their Locust Post Brewery, which they plan to open on the farm in 2020.

The Cornwells look over some of the rare and antique farm and home parts they have accumulated. The collectibles will be used as decoration for the craft beer brewery.

Tony and Denise Cornwell take a break in front of one of the outbuildings on their Lavender and Hops Farm in Little Orleans. The buildings contain hundreds of vintage home, farm and auto parts to use in decorating their Locust Post Brewery, which they plan to open on the farm in 2020.

LITTLE ORLEANS — Tony Cornwell and his wife Denise Partsch Cornwell were inspired after visiting the 1812 Brewery on Mason Road.

The couple have a 26-acre farm off U.S. Route 40 in eastern Allegany County and had been thinking of constructing a wedding venue on their property.

The Cornwells are friends with Sean McCagh and his family, owners of the 1812 Brewery.

“We were talking to Sean and he mentioned we could do a farm brew in addition to wedding venue,” Tony Cornwell said. “We liked the idea. Sean and Corey and the whole family have been an inspiration to us.”

The Cornwells decided to design a brewing facility on their farm in Little Orleans called the “Lavender and Hops Farm” on Old Adams Road.

They are holding a groundbreaking for the facility at noon Thursday with elected officials and business leaders from the across the area in attendance. The farm brewery will be the latest arrival to the farm alcohol industry in the region.

“The facility will be called the Locust Post Brewery,” Denise Cornwell said. “When you have a hops farm, the structural posts that hold everything up ... they are almost like telephone poles. Ours will be locust. We have a lot of locust trees on our property. Locust is strong, it can last a hundred years or more.”

Tony Cornwell said the brewery will have six to eight beers at first.

“We’ll have an IPA, stout, pilsner, ale, a light beer .... will start with a half-dozen or so and then add seasonal beers later.”

What has helped entrepreneurs wanting to enter the farm alcohol market has been the changes in laws.

“Allegany County has been great,” Denise Cornwell said. “They adopted the laws and regulations and they gave us the freedom to produce and serve beer on agricultural land using crops grown on the farm.”

The Allegany County Board of Commissioners voted in January to adopt regulations for beer- or wine-producing startups. The regulations are designed to give entrepreneurs guidelines for opening a farm for growing and bottling beer or wine. County officials said they have been experiencing an increase in individuals seeking to enter the industry.

Tony Cornwell is a home improvement contractor and artist, while Denise is an accountant. Tony Cornwell has accumulated hundreds of vintage home, farm and equipment parts to use to decorate the brewery. The Cornwells decorated the Fantasy Brew Pub at DelFest held in May. The fantasy pub was situated in the multi-purpose building of the Allegany County Fairgrounds.

The brewing equipment for Locust Post has been ordered through American Beer Equipment of Nebraska and will be delivered in November. Tony Cornwell’s nephew, William Bender, will help brew the beer. Tony Cornwell said the plan is to open the brewery in the spring/summer of 2020.

Denise Cornwell said the craft beer industry has a welcoming attitude with “the more the merrier attitude.”

“Within the craft beer industry that is how everybody feels,” she said.  “Everyone we talked to in Maryland, West Virginia, Virginia, Pennsylvania, they have been over-the-top helpful. They tell us to call if we have questions.”

The Locust Post Brewery will allow visitors to see the vats and brewing process. The facility will also include a consumption parlor wrap-around deck for outdoor relaxation.

Denise Cornwell said people like to travel to an area and spend a couple of days visiting all the craft brewers located there.

“The average stay at a farm brewery is about an hour,” Denise Cornwell said. “They want to go to the next one. Sometimes they stay longer if you have entertainment and events and things. We want to offer that with music, games and activities. It’s part of the reason we will have a deck. If someone wants to sit outside they can do it.”

From the rear of the planned building, the “cut in the mountain” at the Sidling Hill Welcome Center will be visible.

“We want to have something where people can come and relax a bit,” Denise Cornwell said. “We want them to visit our tasting room and see the whole farm and see the hops growing.

“We have a vision, someday, for it to be a destination. We want to add on and build on to the property. It will be family friendly and dog friendly. We want people to have a gathering place for enjoying getting out of the city.”