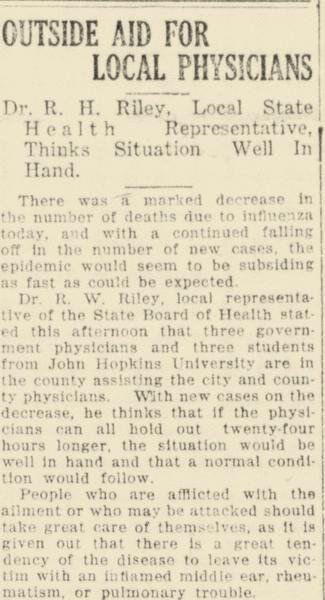 An article on the front of the Oct. 17, 1918 edition of the Cumberland Evening Times. 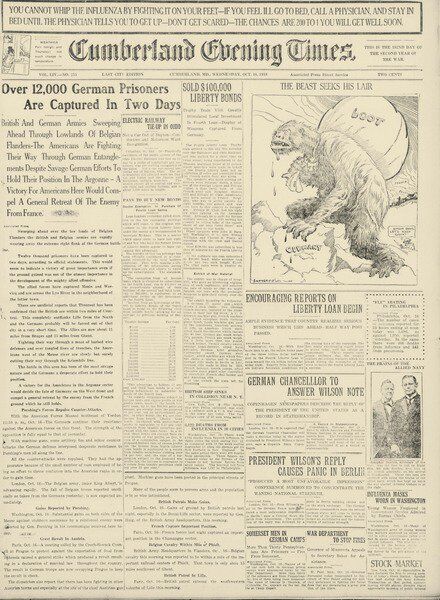 The front page of the Cumberland Evening Times on Oct. 16, 1918 contained a large banner advising readers to be mindful of the ongoing influenza pandemic and protecting their health.

An article on the front of the Oct. 17, 1918 edition of the Cumberland Evening Times.

The front page of the Cumberland Evening Times on Oct. 16, 1918 contained a large banner advising readers to be mindful of the ongoing influenza pandemic and protecting their health.

CUMBERLAND – It was a different time, but maybe not entirely foreign to folks living in the present.

The influenza pandemic first began to emerge in the spring of 1918, amidst an already-tumultuous time. The first wave was comparably mild, but the one that reared up again in the fall toward the end of World War I was not. It is considered the deadliest in modern history, and per the Centers for Disease Control and Prevention “killed an estimated 675,000 Americans and at least 50 million people worldwide.”

The spread of the pandemic was accelerated by American troops moving across the globe, unwittingly carrying the disease along as their passenger. The U.S. Army alone, according to a 2010 article in the Public Health Reports journal, lost nearly 30,000 people before they could deploy to France. Twenty-six percent of the branch would ultimately contract the disease.

All told, about a third of the world’s population at the time, 500 million people, were afflicted with the disease at some point. Most of those killed died not of the flu itself, but of bacterial pneumonia, per the National Institutes of Health, along with other complications like organ failure.

The deceased were also, on average, younger than those killed by seasonal influenza: Where the virus that emerges when the weather gets colder tends mostly to kill older people and children, the average age of those killed by complications from the 1918 strain was 28 years old.

All told, more people were killed by the 1918 pandemic than by the violence of World War I. According to the National Archives, more than 25% of the country contracted the virus, and it decreased the average life expectancy in the United States by 12 years.

Western Maryland was not spared from its grasp. In Cumberland alone, 41% of people reportedly were afflicted with the virus at some point.

The Western Maryland’s Historical Library database, which examined “the men and women from Allegany, Garrett and Washington Counties in Maryland who died in the course of World War I,” found in an analysis of letters, obituaries and more records from the time that “in Allegany County, 63 men and 1 woman died of disease; in Garrett County, 19 died of disease, and 34 in Washington County. In Western Maryland, 46 were listed as dying of broncho pneumonia, 33 of pneumonia and 17 of lobar pneumonia. Only 3 people were listed as dying of influenza.”

Lonaconing and Cumberland were both included in a 1918 canvass, the results of which were detailed in a March 1919 article in the Public Health Reports journal titled “Influenza in Maryland: Preliminary Statistics of Certain Localities.” They were included alongside Baltimore, Frederick, Salisbury and three unnamed rural districts in Washington, Wicomico and Frederick counties.

The Cumberland Evening Times, a predecessor of the Times-News, documented much of the spread of the virus throughout the region at the time. In the present, these articles and advertisements serve as an interesting snapshot of that moment in time.

Many of the headlines seemed to take an optimistic tone, but the contents of the paper in many editions, especially from October 1918, were less heartening.

As COVID-19 continues to spread throughout the region and world, one may note some similarities between then and now. The shock of the amount of people who fell ill and died was just a portion of what made the pandemic notable. As in the present, the 1918 pandemic had significant effects on day-to-day life and business. Businesses were ordered closed then, as they have been now.

While a search of the archives did not seem to indicate such a sentiment existed in Western Maryland, in California, folks in San Francisco organized a small group called the Anti-Mask League that protested a citywide ordinance deeming people don the protective face coverings.

“According to the undertakers’ records, the death rate due to the influenza epidemic has fallen off over fifty percent since Sunday,” the lede of that item reads.

An emergency hospital that was operating on Washington Street, as of that report, had 41 patients. They’d seen 69 total patients there by that point, and 11 deaths.

“At the new City Hospital this morning 25 patients were registered,” the report continued. They were slated to receive more beds, bringing their total capacity to 75. Patients from “Lonaconing and other Creek towns will be brought here for attention,” the report said.

The following day, Oct. 17, 1918, the Evening Times reported that Justice Cornelius J. Murphy of Lonaconing, who’d served as a justice of the peace for 50 years, had died that morning of pneumonia at 80 years old. At the time of his death, two of his sons were reportedly serving with the military in France. Two other Lonaconing residents reportedly succumbed to pneumonia the same morning.

In fact, much of the news on that page was related to the pandemic. A sole item on the front page that detailed how “three government physicians and three students from Johns Hopkins University are in the county assisting the city and county physicians.” A local health official was cited therein as considering the “situation well in hand.”

Below the item about the deaths in Lonaconing on page 9, it was reported that the Allegany Circuit Court would not convene as scheduled on Oct. 21, and that the date would be moved to Oct. 28. Per the item, judges moved to reschedule “because the control of the influenza epidemic is not completely in hand.” Ultimately, as indicated by an item that ran on Oct. 25, that date would be postponed once more to Nov. 6, 1918.

Elsewhere on that page ran an item advising readers on how to properly wear a mask to ward off the flu and pneumonia.

“It is quite simply made of either gauze, cheesecloth or an old handkerchief,” the item reads. It additionally detailed how to cut them to size and properly sterilize one’s mask by boiling it for 10 minutes after wearing.

The lead article on the front page Oct. 18, 1918 had the headline “Influenza abating rapidly in city.”

Per the lede, “Persons in close touch with the influenza epidemic situation in this city state there is a rapid decrease in the number of new cases. In fact the doctors now are largely looking after patients hitherto stricken.”

It detailed aid from the local health department, as well as the Red Cross, “to families in Cumberland where members have been stricken with influenza.”

The personal items on page 7 of the Oct. 22 edition listed, in part, who around the county and region was ill with the flu, and how they were faring. Some entries included addresses of patients as well. A woman living on First Street, for example, “who was very sick with Spanish flu is much improved,” and a woman and her seven children were identified as able to resume going out and about town.

The same day, a notice ran in the paper from Sheriff Robert Hutcheson and County Commissioner and acting Health Officer James McAlpine. The notice advised that all businesses outside of Cumberland — governed by city regulations rather than county, the notice explained — were to close nightly at 6 p.m. until further notice.

“Drug stores and restaurants are not included in this order but all other businesses are,” the notice read.

In the following day’s edition, a notice on page 7 of the paper with a dateline in Wheeling, West Virginia, noted that ads for grave diggers were being run in newspapers elsewhere in the state. “The extreme labor shortage, coupled with the high death rate caused by Spanish influenza are the causes. The need for grave diggers is especially great in the southern end of the state, where influenza has a strong hold and is killing scores in every community.”

On Tuesday, Oct. 29, 1918, a column of deaths, funerals and other happenings in Keyser, West Virginia, said “soda fountains, schools and moving picture houses were opened Monday. The epidemic of influenza has about passed over. Health Officer H.F. Coffman says that the situation looks very favorable.”

Though there was no mention of the flu on the front page of that day’s edition, the Nov. 17, 1919 death of a 21-year-old Keyser woman, Mrs. W.B. Ansell from “brain fever superinduced by Spanish influenza” was listed in the obituaries

On Tuesday, Jan. 14, 1919, there ran an advertisement with the headline “Spanish influenza more deadly than war.” The subhead claimed “that epidemic cost more lives than American loss in battle — Danger not over. Great care necessary to prevent further outbreak.”

“Our greatest danger now, declare authorities, is the great American tendency to forget easily and to believe the peril is over,” it read.