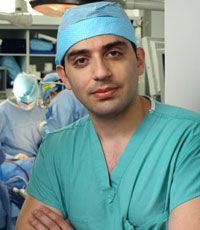 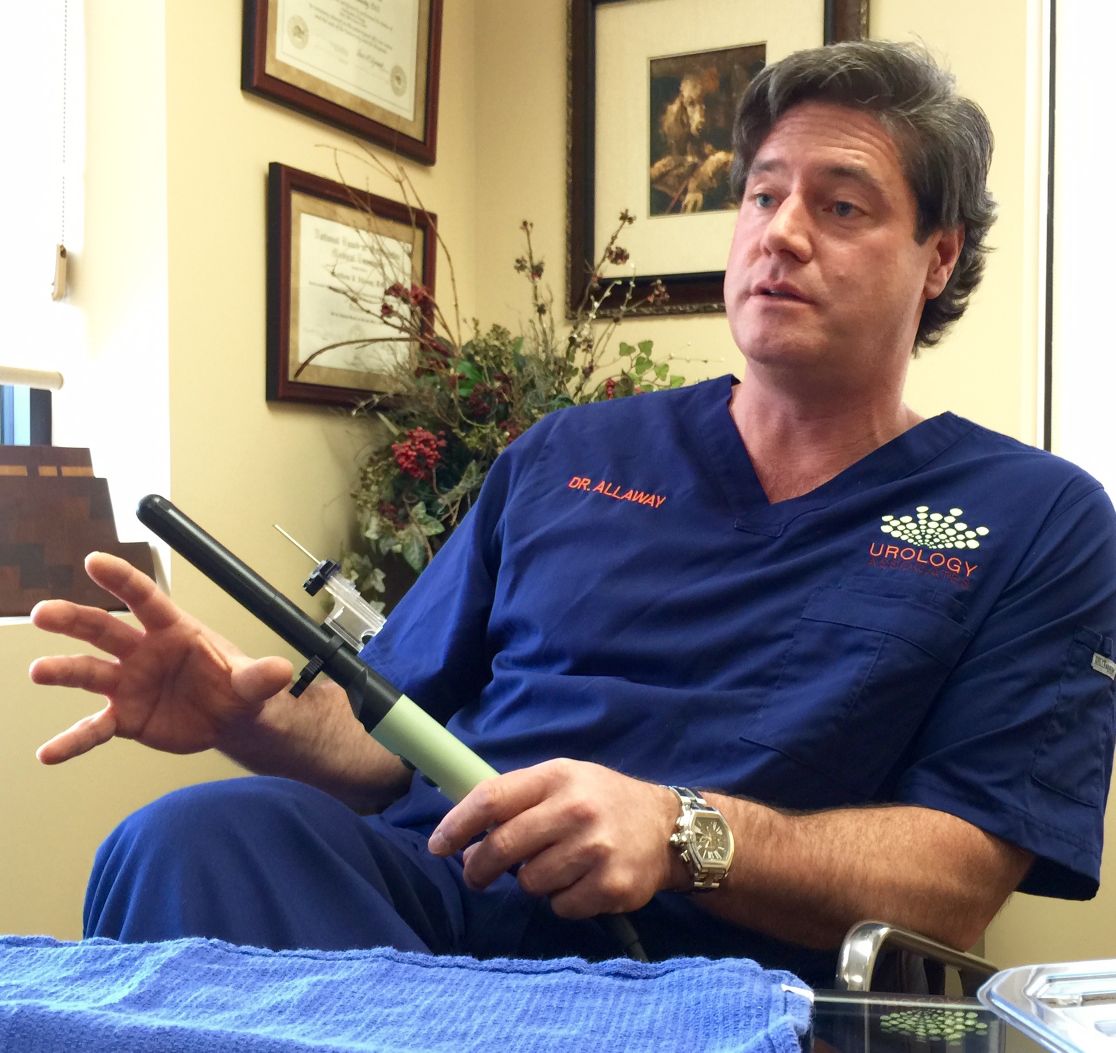 Dr. Matthew Allaway, a Cumberland urologist, is the inventor of a prostate biopsy device that is being used in various parts of the United States.

CUMBERLAND — As the use of a prostate-biopsy device invented by a Cumberland physician expands around the world, it is likely there will be fewer and fewer post-procedure infections.

“We can humbly say that since going to this technique we have had zero infections at our center,” said Dr. Matthew Allaway of Urology Associates on Williams Road.

Each year, there are 1.2 million prostate gland biopsies in the United States. There are are about 500 annually at Urology Associates.

Instead of guiding the sampling needle through the rectal wall, where fecal coliform bacteria can become attached and be transferred, Allaway’s device allows for an alternate or transperineal route to the prostate gland, not simply reducing subsequent infections, but avoiding them.

With this method, the pathway to the prostate is in front of the rectal wall, not through it.

"Some locations (using the transrectal approach) were seeing infection rates as high as 6 percent following biopsy," Allaway said. "And these are life-threatening infections that almost always require hospitalization of two or three days. The usual case is that 36 hours after the biopsy there is a fever with chills and shakes."

A year ago, when the Cumberland Times-News published a story about the device, clearance was being awaited from the Food and Drug Administration.

“Following that article, we got calls from men in New York and Tennessee who wanted to come here for their biopsies,” Allaway said.

And, since FDA provided clearance, 5,000 devices — officially called Precision Point Transperineal Access System — have been manufactured and some are in use in various parts of the country.

Twenty-five physicians have come to Cumberland to be trained to use the device. They work at hospitals such as Johns Hopkins, Cleveland Clinic, MD Anderson Cancer Center in Houston and Rush University in Chicago.

Allaway sometimes travels to other hospitals to provide training.

Dr. Mohammad E. Allaf, of the Brady Urological Institute at Johns Hopkins Hospital, sent Allaway a Tweet describing how well the device had worked and saying it would become the new standard of care for prostate biopsies.

The world headquarters of Perineologic will open soon at 183 North Centre St. in Cumberland.

Allaway, president of the company, along with his wife, Kelli Allaway, chief financial officer, and John M. Hart, chief operating officer, have been frequent fliers to destinations where they describe the device to health care professionals.

“Our next trip is to New Jersey, but we have recently been to Ruby and Mon General hospitals in Morgantown and the Charleston Area Medical Center,” Hart said. “There are 100 meetings a year that we should be sending someone to for marketing and sales.”

A visit to Wales is in the rearview mirror.

Clearance to market the device internationally is anticipated in April, Hart said.

The device is being manufactured at Bridgemedica near Boston.

“We found out that FDA clears only 5 percent of the medical devices it evaluates,” Matthew Allaway said. “And Bridgemedica said the FDA clearance for our device was the fastest they had seen.”

Manufacturing is the only aspect of the company that won’t take place in Cumberland.

Not only does the device provide a safer route to the prostate, but results in a better cancer diagnosis, according to Matthew Allaway.

“We can sample the entire prostate, which couldn’t be done using the old method,” he said.

A (WARNING) graphic demonstration video is available on YouTube. As of mid-February it had been viewed more than 1.3 million times.

Hart said the company reached out first to the medical industry’s thought leaders, anticipating that the word would be spread to practitioners.

“But we want a public awareness, as well,” Matthew Allaway said. “We want a man who needs a biopsy to know that this new, healthier way exists.”

Up next, the world! Cumberland doctor's prostate biopsy device new standard of care. Company HQ will be in city https://t.co/ScBjDsRvOQ pic.twitter.com/fQXPwVLwYK

.@dbasanta is working with prostate cancer clinicians to understand metastasis to the bone #mathoncoFest17

"The most important thing is to get men to talk about prostate cancer. To get it out in the open." - Ken Griffey, Sr. #ZEROSummit2017

As a prostate cancer survivor thanks to early detection, I cannot agree with this enough. https://t.co/cS3D7fvyyo

CUMBERLAND — A Cumberland urologist is in great demand these days, traveling to places such …

It wasn’t planned, but, as hundreds of thousands of people participated Jan. 21 in the Women…

ON THE ANNIVERSARY - Memories of the 1996 Flood: ‘Where’s the Fruit Bowl, it's underwater'

Months passed, Tom Robinette said, before he would no longer hear rushing water, even when t…

Crab cakes! I'd do it for crab cakes

There's not much in the hook-and-bullet hopper at the Maryland General Assembly, but give 'em time.

Md. pitches in with funds for Lefty Grove bronze statue and park

From time to time, I use this column to tell readers something about this profession I have chosen, or maybe I should say the profession that …

GRANTSVILLE — The Cornucopia Café will host a meet-and-greet with urologist Dr. Matthew Allaway on June 11 from 5:30 to 7:30 p.m. to celebrate…