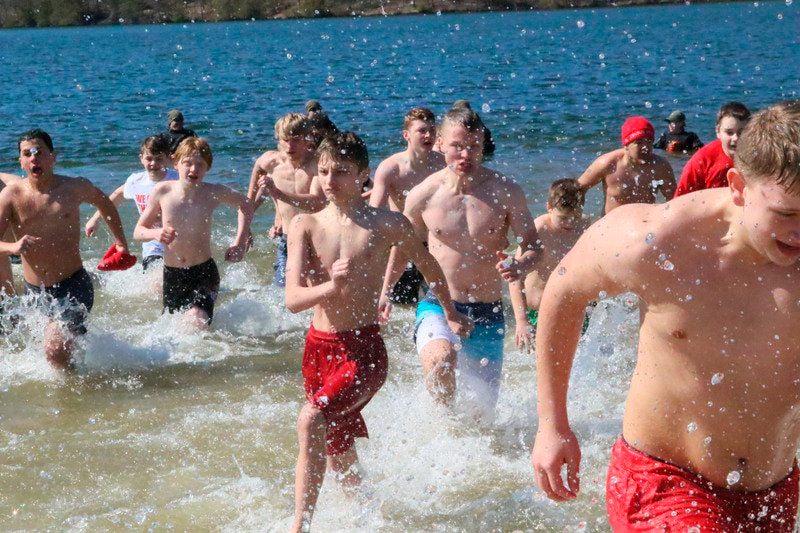 Participants leave Lake Habeeb at Rocky Gap State Park Saturday during the annual Hooley Plunge. Hundreds of people from all walks of life ran into the frigid water to raise funds for Special Olympics and other programs in Allegany County. 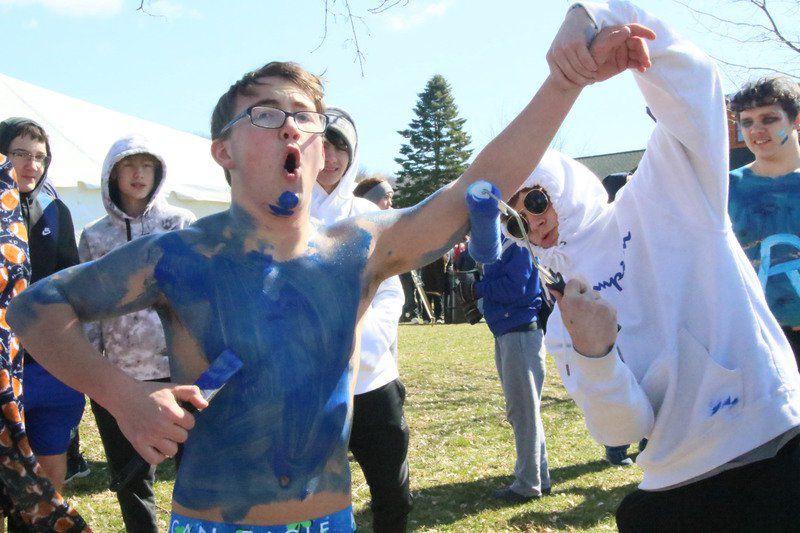 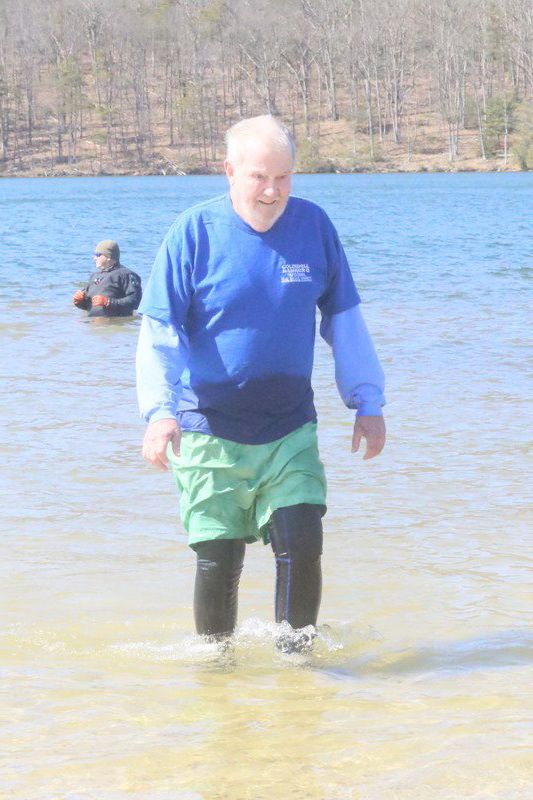 Joe Cunningham exits the lake. He has participated in 15 of the 16 Hooley Plunges. 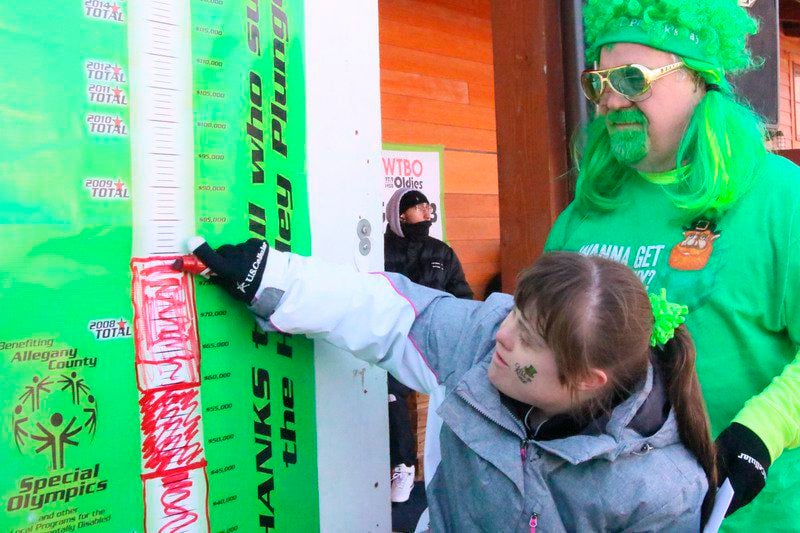 Chelsea Sullivan records the dollar total as the Hooley Plunge progresses. Watching is her father, Skip Sullivan, who also took a dip in the lake.

Participants leave Lake Habeeb at Rocky Gap State Park Saturday during the annual Hooley Plunge. Hundreds of people from all walks of life ran into the frigid water to raise funds for Special Olympics and other programs in Allegany County.

Joe Cunningham exits the lake. He has participated in 15 of the 16 Hooley Plunges.

Chelsea Sullivan records the dollar total as the Hooley Plunge progresses. Watching is her father, Skip Sullivan, who also took a dip in the lake.

FLINTSTONE — It’s a bold and cold way to spend a Saturday morning.

Back for its 16th year, the Hooley Plunge was held on a clear and windy day at Rocky Gap State Park’s Lake Habeeb. Co-chair Rob Adams said every cent raised stays in Allegany County, and funds programs ranging from Special Olympics to some offerings that support special needs students in county public schools.

Since the event’s inception, Adams said, they’ve raised around $340,000 just for Allegany County schools. They’ve raised more than $1.4 million overall in the decade-plus the plunge has been around.

“It’s not getting dispersed throughout the state, and that’s one of the big draws,” Adams said. “That’s why the schools are very active with it. We actually put back into the schools.”

In addition to the money raised, Adams and fellow co-chair Stephen Grey both agreed that the way the Hooley Plunge brings the community together is one of its most defining characteristics.

“Everyone’s always divided,” Adams said of the different schools and their rival sports teams. “But today, everybody comes together.”

“It’s the least we can do for the community,” Grey said.

Both Grey and Adams said they were going to take the frigid plunge that day, planning to go all the way up to the divers at the end before making their exit.

Dr. Sean McCagh was one of the people involved with organizing the inaugural Hooley Plunge. The first year, McCagh remembered, “maybe 15-30 people ran in.” In the intervening years, he said, the highest amount of folks he can recall taking the plunge was 800 or so.

McCagh said he’s inspired, too, by how active a role local students have taken in the plunge. He recalled one year where students from John Humbird Elementary School, “one of the more socioeconomically depressed schools in Allegany County,” came in with $1,500 in change and small bills that they’d raised themselves.

“I always say that if that school could raise that kind of money, all the schools can,” McCagh said, adding that the community spirit you see at the Hooley is also inspiring. “It’s crazy to get this many people to come out and jump in cold water. And this is a nice day!”

Skip Sullivan, whose daughter Chelsea is a local Special Olympics athlete, said he’s been raising money for the Hooley Plunge for years with her in mind. Despite the cold and wind and still recovering from a broken back, Sullivan said he was planning to get in the lake’s wintry waters.

A Special Olympics coach himself, the first year he participated Sullivan said he raised about $1,000, just approaching friends and family and co-workers. In 2019, he said, he and the Barrelville Outdoor Club, with whom he’s since partnered for a fundraiser in Chelsea’s name, donated $12,540.

This year, they raised $17,500, which was presented about an hour before folks began to take the plunge proper.

“Chelsea is our hometown Olympian, not our Special Olympian” Barrelville Outdoor Club president Jake Wilhelm said. “When she comes to the club every Friday with her dad, she has rule of the room. What makes it special is she lets us tag along. That’s what makes it special for us to do what we do.”

When it came time for the plunge, Sullivan did wade in with the rest, going as far out as he could and submerging himself briefly in the water. It was for Chelsea, after all.