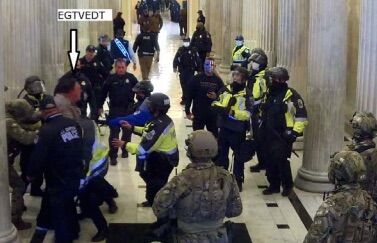 This photo taken from a federal affidavit allegedly shows Daniel Egtvedt of Oakland surrounded by law enforcement inside the U.S. Capitol on Jan. 6. 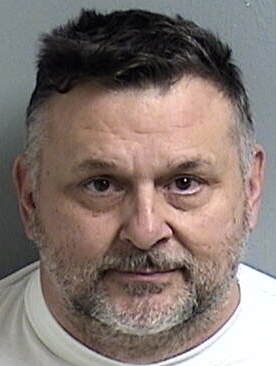 OAKLAND — A Garrett County man has been charged with taking part in the Jan. 6 storming of the U.S. Capitol.

Daniel Egtvedt, of Oakland, was arrested without incident Feb. 13 in the area of Boy Scout Road, according to a statement Monday by Maryland State Police.

He was taken into custody on an arrest warrant issued Feb. 9 after a citizen reportedly identified him from an FBI information poster published Jan. 14 seeking to identify individuals involved in the riots.

A court affidavit filed against Egtvedt details his alleged involvement in activities at the Capitol, where he was allegedly seen fighting with police and attempting to push his way through a line of Capitol Police officers. It includes photographs, purportedly of Egtvedt, derived from fixed cameras at the Capitol, police body cameras and through social networking application videos.

The criminal complaint details alleged criminal actions by Egtvedt from 2:47 p.m. when he entered the Capitol until he was removed at 3:14 p.m.

At one point, according to the affidavit, Egtvedt rushed at a Capitol Police officer while screaming at her to shoot him three times. Another officer described Egtvedt as “generally non-compliant, screaming, and incoherent.”