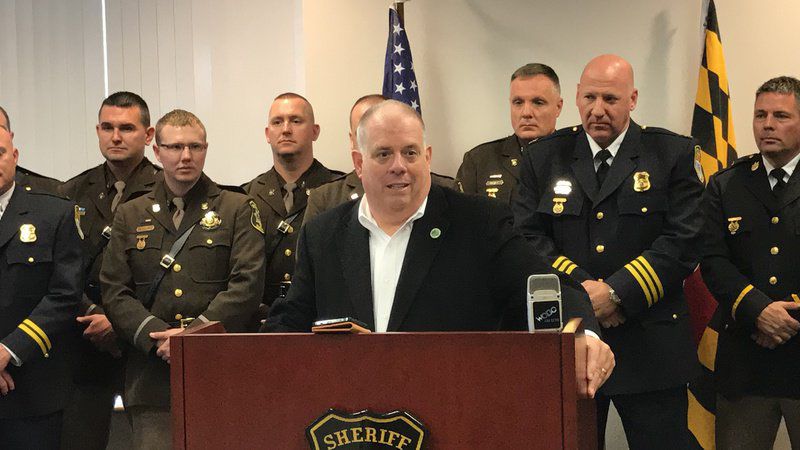 During a visit to Allegany County, Gov. Larry Hogan on Friday, Oct. 14, 2016, talks at the Allegany County Sheriff’s Office of efforts to combat the heroin and opioid abuse problem on local and state levels. (CTN file photo) 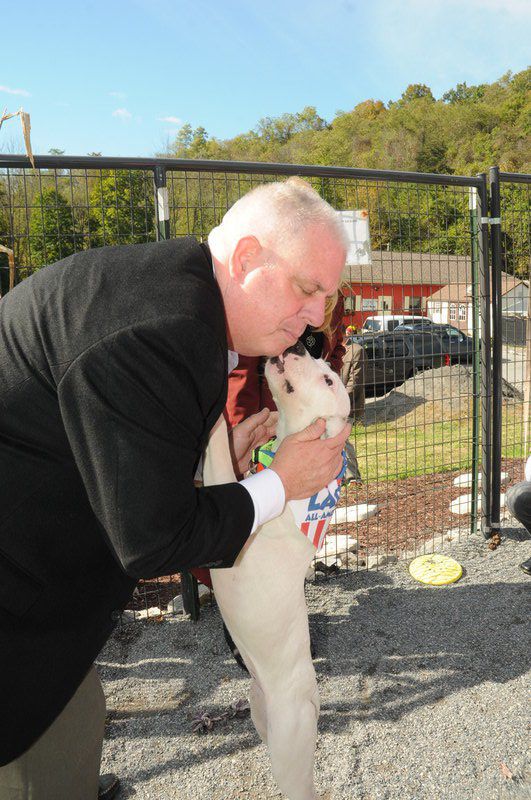 Maryland Gov. Larry Hogan greets “Sweet Pea” during a visit to the Allegany County Animal Shelter Friday. The American Shelter Dog is up for adoption at the shelter. 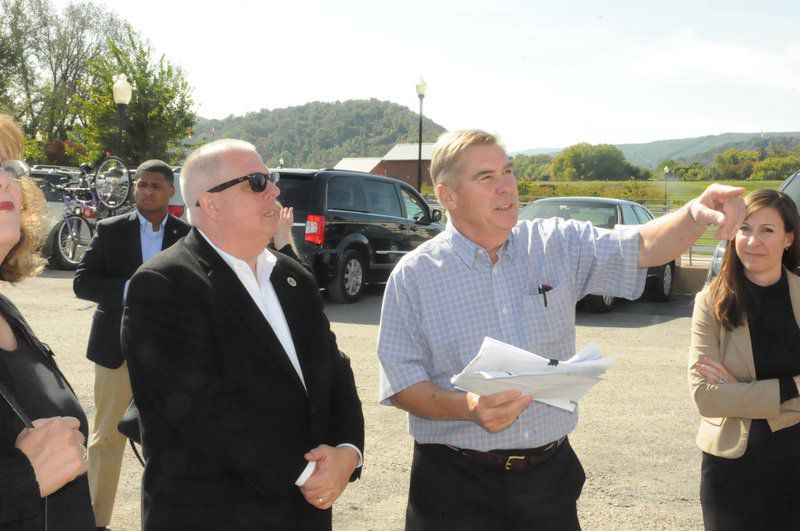 During a visit to Allegany County, Gov. Larry Hogan on Friday, Oct. 14, 2016, talks at the Allegany County Sheriff’s Office of efforts to combat the heroin and opioid abuse problem on local and state levels. (CTN file photo)

Maryland Gov. Larry Hogan greets “Sweet Pea” during a visit to the Allegany County Animal Shelter Friday. The American Shelter Dog is up for adoption at the shelter.

CUMBERLAND — Gov. Larry Hogan received an update on the latest escalating overdose and fatality figures resulting from the heroin and opioid crisis in Allegany County during a daylong visit to the region on Friday.

The visit to Cumberland was part of a three-day swing through Western Maryland. Hogan spent Thursday in Hagerstown and will spend Saturday in Garrett County.

In Cumberland Friday, Hogan spoke at the Allegany County Sheriff’s Office on the latest efforts to combat heroin and opioid abuse statewide and in the county.

“I want you know how much I appreciate every single one of you for fighting crime in our state every day,” said Hogan.

Allegany County Sheriff Craig Robertson hosted the event, with Capt. Gregory Leake of the Cumberland Police Department, and David Goad, program director for Operation Safe Streets, also participating in the event. Troopers with the Maryland State Police and members of the Cumberland Police Department and other local branches of law enforcement attended, as well as elected officials and Republican congressional candidate for the sixth district, Amie Hoeber.

Leake shared the latest statistics stemming from the opioid problem.

“We just administered naloxone (opiate-reversing drug) to an arrest a minute ago in our station,” said Leake. “He was wanted on a warrant and passed out right in front of the guys. He’s alive, but this is happening every day.

While speaking, Leake held in his hand a list of the names of the people who have overdosed and died.

“We’ve administered naloxone 50 times so far this year. That means there could have been 50 more people who died. That’s not counting the ones EMS responds to that we don’t go to.

“It’s a tragedy and an epidemic and we need to do something about it.”

Leake said law enforcement “can’t arrest its way out of this problem.” He said the financial help sent to Allegany County this summer from the governor’s office was appreciated.

“It means the world to us,” said Leake.

Hogan discussed some of the measures taken since a task force studied the problem last year and made recommendations.

He spoke about the Governor’s Office of Crime Control & Prevention grant awarded to the Cumberland Police Department in August to fight the heroin epidemic. The grant awarded $220,000 to continue the Safe Streets Initiative in the city of Cumberland and Allegany County, and $84,180 to hire a new heroin coordinator.

Goad said that the Safe Streets Initiative has helped to reduce on-file arrest warrants by 54 percent over the last two years.

Hogan, who attended with his wife, Yumi, and several cabinet members, said he will continue to fight drug dealers while expanding quality treatment.

“This is a fight, and it’s absolutely worth fighting,” Hogan said. “We must remain focused and steadfast in our resolve to find real and lasting solutions to this crisis. We need to expand quality treatment and crack down on drug traffickers who profit by destroying lives and our communities.”

Hogan began his day at the Rocky Gap Resort. He delivered remarks at the inaugural Technology at the Gap Conference attended by web developers, systems administrators and other IT professionals.

Hogan said Maryland ranks fourth in the nation for concentration of IT jobs with 12,000 positions.

“Maryland is absolutely leading the way in IT, and Western Maryland is the next frontier.”

Hogan said his office is working with professionals from the IT industry to develop new tangible incentives to encourage more IT companies to locate in Western Maryland.

Also in the morning, Hogan visited the Allegany County Animal Shelter and stopped at the Western Maryland Regional Medical Center.

“We did a tour of the hospital — the cardiac ward, trauma center and the cancer ward,” said Hogan. “It made me feel better when someone inspired and cheered me up. Nearly 30,000 in Maryland last year were diagnosed with cancer, and I was one of the many faces. It’s a personal passion of mine and I will continue to do what I can.”

In the afternoon, Hogan toured the Footer’s Dye Works building to see the $9 million renovation project that is underway. He was given a tour of the historic four-story structure by the project developer, Mike Joy.

A couple weeks ago, about the worst residential problem Bryan Hochstein faced was whether his neighbor would power on a noisy leaf blower too …

Over the past five to 10 years the heroin epidemic has grown to significant proportions. The recent articles in the Cumberland Times-News real…