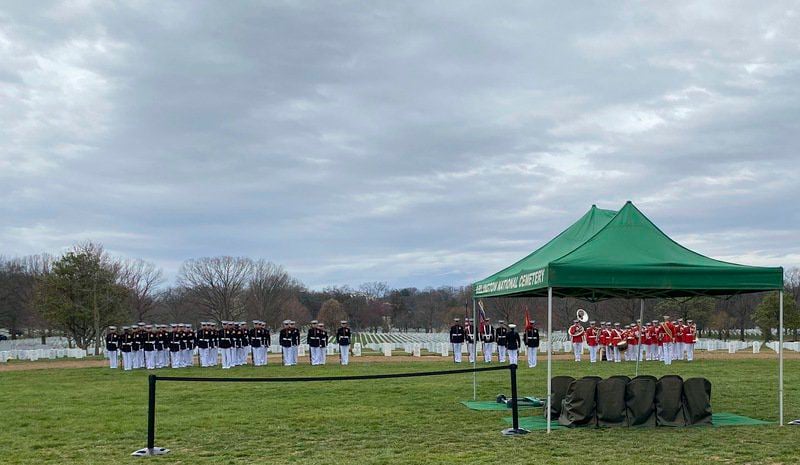 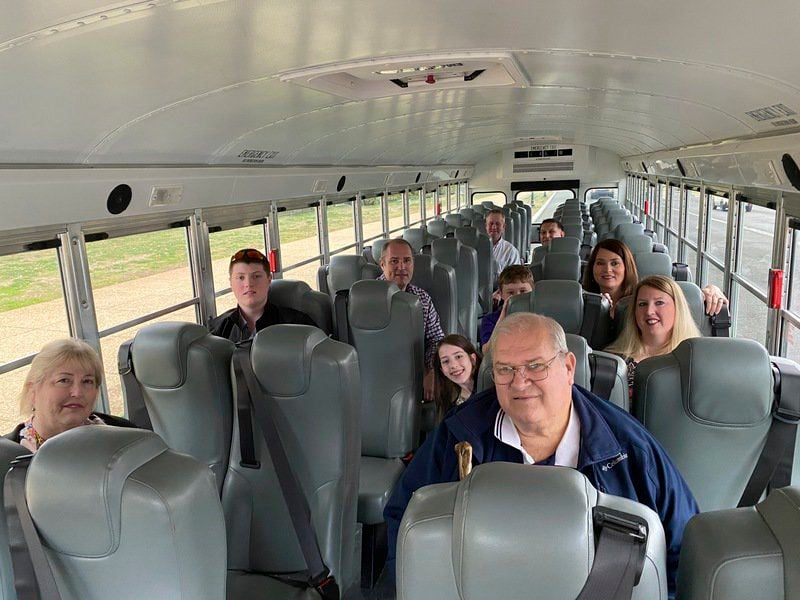 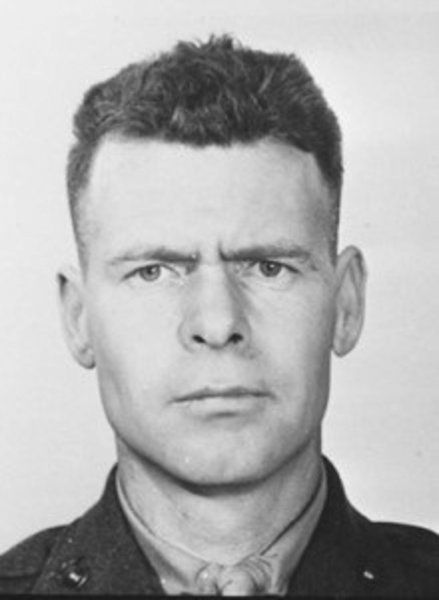 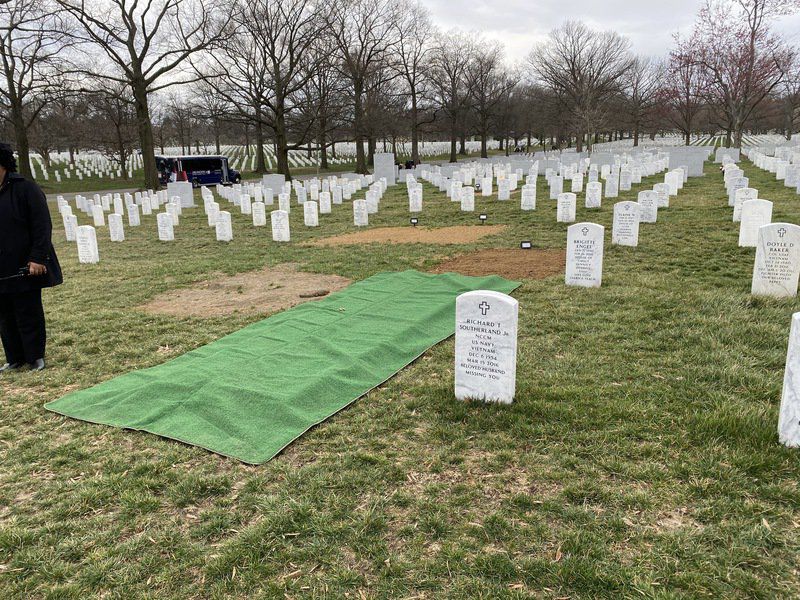 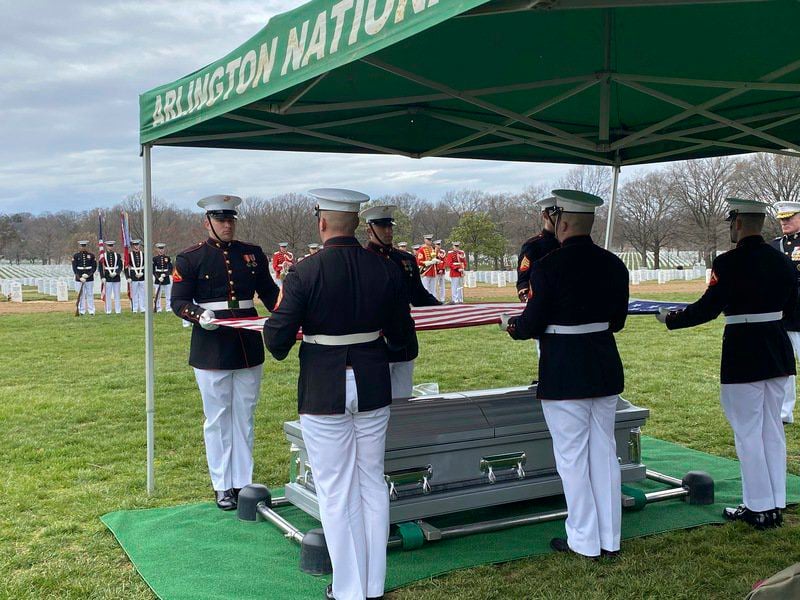 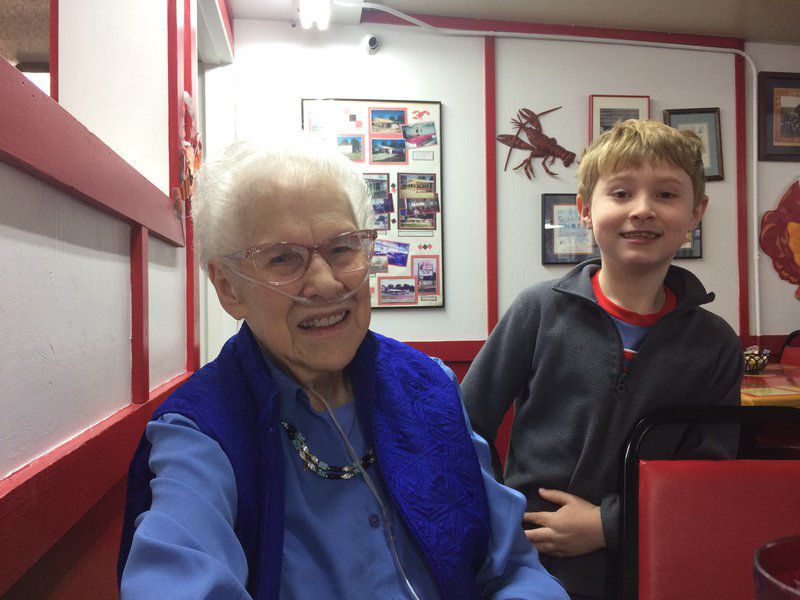 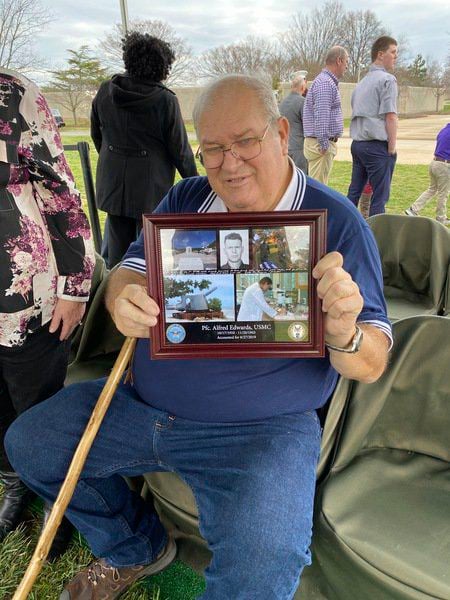 Most of the stories I’ve reported on in the past week or so focused on the rapidly changing COVID-19 situation.

But amid the chaotic, constantly evolving press conferences that addressed the global pandemic, I covered an assignment at Arlington National Cemetery for our sister paper in Stilwell, Oklahoma.

In the following story, the past is met with technology to answer a question one family has been asking for 75 years: What happened to Alfred Edwards?

ARLINGTON, Va. — Alfred Edwards would never meet the multiple generations of relatives who recently gathered to bring him home.

But loving family ties proved more powerful than lost years as folks came from across the country to pay him their respect.

In November 1943, he was a member of Company E, 2nd Battalion, 2nd Marine Regiment, 2nd Marine Division that fought in the Battle of Tarawa in the Pacific Theater of World War II.

Roughly 1,000 Marines and sailors were killed, and nearly 2,000 injured, on the island during several days of fighting.

Edwards was reportedly killed on the first day of the battle.

In 1946, the 604th Quartermaster Graves Registration Company centralized all of the American remains found on Tarawa to Lone Palm Cemetery for later repatriation.

However, almost half of the known casualties were never found, and no recovered remains could be associated with Edwards.

October 1949 records indicate a review board declared him “non-recoverable.”

Remains that could not be identified were buried in the National Memorial Cemetery of the Pacific, known as the Punchbowl, in Honolulu, including two sets, designated Tarawa Unknown X-203 and X-209.

For more than 75 years, Edwards was unaccounted for and listed as missing in action.

That changed over the summer when his niece, Elenora Lee, 93, provided her DNA to identify him.

“He was a born naturalist,” Lee, a Minden, Louisiana, resident, said of her late uncle. “He loved to roam the hills (and) knew where all the wild fruits and nuts were.”

Edwards, who wasn’t married and lived with his parents John and May Edwards, also did a lot of woodworking, she said.

“He was one of nine children,” Lee said. “All of them are gone.”

She was shocked when the Marines called to ask for her help to identify her uncle’s remains.

“It was like somebody hit me in the stomach,” Lee said. “Old memories came back.”

She recalled the pain her uncle’s loss caused her family.

While Edwards had three brothers who served in the military and came home from the war, his parents were never at peace with not knowing what happened to him.

“I just wish my grandmother was alive so she should know. She grieved the rest of her life,” Lee said and added she’s grateful the military is working to identify folks like her uncle. “I think this is wonderful what they’re doing, bringing these people home.”

Lee, who has health problems, was unable to travel to Arlington for the burial of Edwards.

“I’ve tried to do the best I can,” she said of helping to identify his remains. “I wish I could be there.”

Her son, Grady Lee, of Haughton, Louisiana, and more than a dozen other family members were at the service.

“I think it’s pretty incredible that the government follows through,” he said of the work that went into bringing his great uncle home.

“He was shot through the chest,” Grady Lee said.

According to military records, of the 16 million Americans who served in World War II, more than 400,000 died during the war and more than 72,000 service members are unaccounted for.

Edwards’ name was recorded on the Courts of the Missing at the Punchbowl, along with the others killed or lost in WWII.

Now, a rosette will be placed beside his name to indicate he has been accounted for.

“My mother is so grateful that (the Marines) have done this,” Grady Lee said. “She notified all the relatives she could locate.”

Earlier this month, Major Evita Mosqueda, of Marine Barracks Washington, escorted the remains of Edwards from Hawaii to Arlington National Cemetery, where more than a dozen of his family members gathered for his burial with full military honors.

Marines in dress uniforms transferred his casket covered with a U.S. flag to a caisson led by a team of white horses that carried his body through the cemetery.

Nearly 100 military members were part of the event, which included a 21-gun salute that rang across the cemetery.

Edwards was buried in Arlington’s Section 60 at Gravesite 11305.

His relatives at the event included Muskogee, Oklahoma, resident Linda Frazier, her husband, daughters and grandsons.

Grady Lee’s wife, Jhan, was at the ceremony.

Her grandson, Caleb Lee, 14, was also at the cemetery. He’s done a lot of reading about World War II, he said.

“I’m really lucky. Not many people get to do this,” he said of the Arlington experience. “It’s a miracle that (missing military members) get recovered. It’s more of a miracle that they bring them home.”

Watch a video about Edwards at https://www.dvidshub.net/video/742754/private-first-class-alfred-edwards-repatriation.

FROSTBURG - Rose Marie Sevinsky, 76, passed away on Friday, March 27, 2020, at her residence. Born on Aug. 29, 1943, in Lonaconing, she was the daughter of the late James and Wihelmina (Seib) Sevinsky. In addition to her parents, she was preceded in death by her sister, Wilhelmina M. Sevinsk…