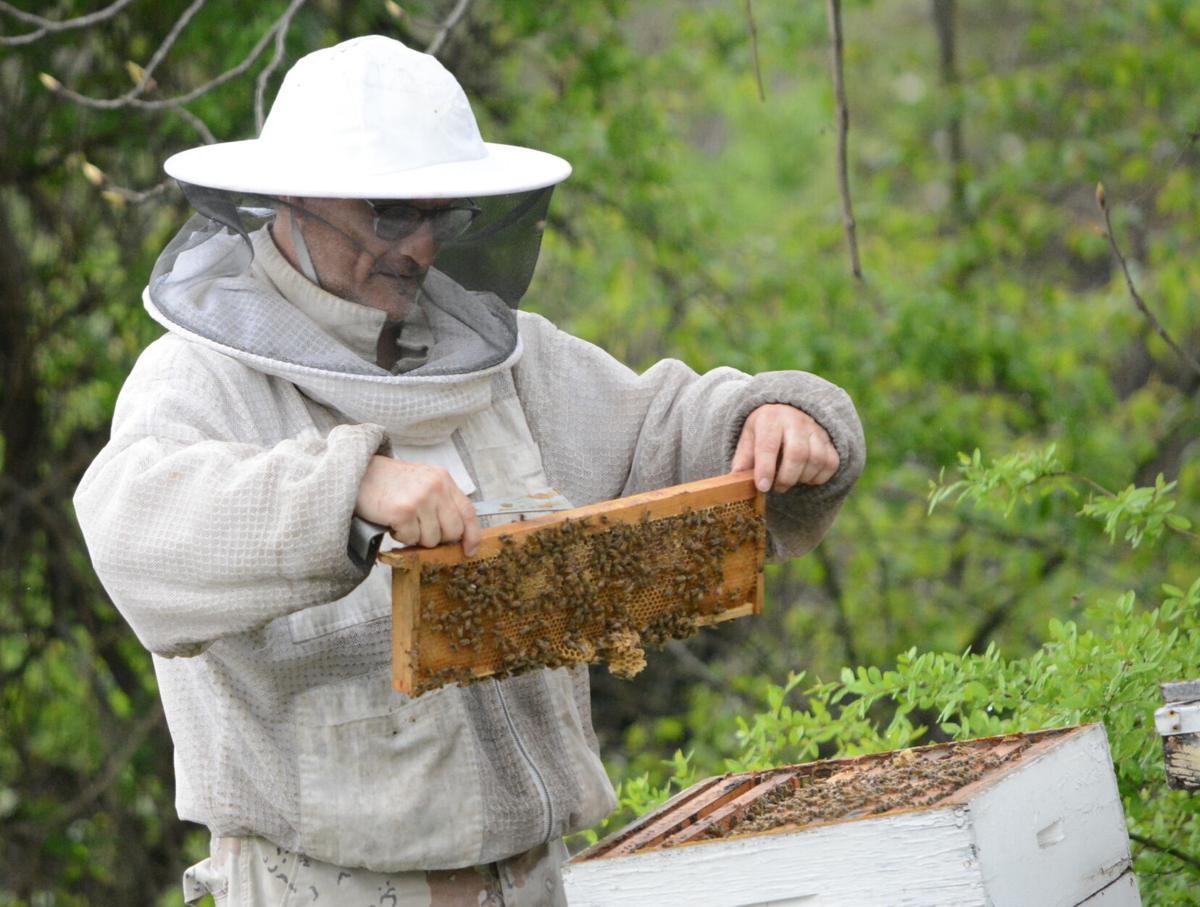 Ben Cooper, author and beekeeping instructor at Allegany College of Maryland, holds a frame of bees. 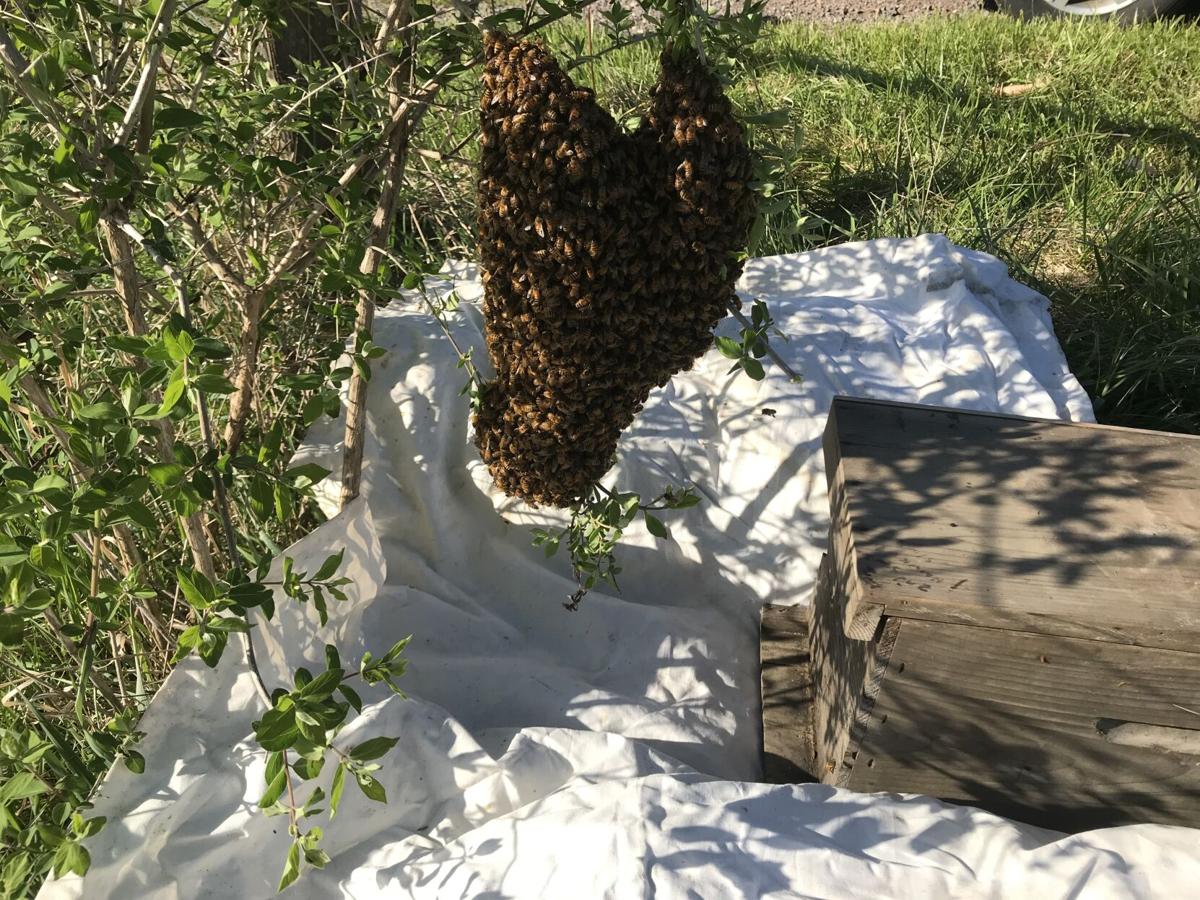 This beehive swarm was captured by Ben Cooper, an author and beekeeping instructor at Allegany College of Maryland.

CUMBERLAND — Ben Cooper likes the idea of a national designation that would give Cumberland a bejeweled addition to its nickname: “The Queen Bee City.”

Cooper, 59, is an author, and beekeeping instructor at Allegany College of Maryland.

He has been a beekeeper for most of his life, and through practice and education maintains successful hives that he routinely divides to make more.

Recently, he talked of a federal designation “Bee City,” which provides a structure for communities to conserve native pollinators by fostering a healthy habitat.

“As the name suggests, the focus of Bee City USA is bees, and primarily our native species,” beecityusa.org states. “The steps that affiliates take to conserve our native bees, including creating safe habitats and hosting community events, will also help other pollinators including butterflies and moths as well as the non-native honeybee. One of the most impactful actions any affiliate can take is to encourage others to think beyond the honeybee and recognize the true diversity of bees that sustain our communities.”

Pollinators including honeybees are responsible for roughly one-third of the food and drink people consume.

“The value of crop pollination has been estimated between $18 and $27 billion annually in the U.S.,” the website states. “Research has shown significant declines in native pollinator population sizes and ranges globally. In fact, up to 40% of pollinator species on earth may be at risk of extinction in the coming years as a result of habitat loss, pesticide use, and climate change.”

Currently, there are 250 Bee Cities, including Annapolis, Westminster and Middletown, and academic campuses in 43 states.

Becoming a Bee City USA affiliate requires a commitment to conserve native pollinators, laid out in a resolution adopted by a local city council.

“It sounds good. Anything that you can do to help the environment … the quality of the trees and the flowers around, is really good,” he said.

“And it sort of fits out here where we are,” Morriss said. “Allegany County makes it a great location to do something like this.”

The designation would also speak to the city’s involvement in nature and outdoors, he said.

Morriss said the city’s environmental specialist and forester will connect with Cooper and other bee experts to learn more.

Cresaptown resident Jeff McIntyre, 70, has been a beekeeper for roughly 13 years.

“I started with a couple swarms,” he said. “You can get along with them and they can be a real benefit.”

Today, McIntyre cares for 50 to 60 honeybee hives and maintains healthy plants for pollinators.

A Bee City designation would be valuable for Cumberland, he said of the area’s rich ecology that includes Wills Creek and the North Branch of the Potomac River.

“All these things are good public relations,” McIntyre said. The designation would carry a message that “these must be kind people” for folks that are visiting or considering a relocation to Cumberland.

“Everybody has a stake in it,” he said

Beekeepers face a variety of challenges including toxic chemicals in lawn treatments and tiny arachnids that can spread up to 20 viruses to honeybees.

“Mites are the biggest threat worldwide to bees,” Cooper said. “What a tick does to humans, the mite does to the bees.”

“So they go after the young,” Cooper said. “But they will feed on the adult bees.”

On a 10-year average, beekeepers across the region lose roughly 40% of their hives because of mites.

“That’s not sustainable,” Cooper said. “About 18 to 20% is sustainable, so beekeepers have to combat these mites. If they do nothing they’ll lose their bees eventually.”

Treatments of mites include natural and chemical-free methods.

“Bees are dying because of mites over winter,” Cooper said. “But (bees) are very prolific and can reproduce extremely well.”

Products designed to kill weeds can also harm pollinators and plants they need.

“The biggest thing is people do lawn treatments,” Cooper said and recommends folks should “not be worried about dandelions in their yard,” and instead add pollinator-friendly plants to their property.

“Milkweed is one of the prime food sources for monarch butterflies, but it’s considered a weed in someone’s yard,” he said.

CUMBERLAND — Please join us for a celebration of life service to honor Hila Elizabeth (Ritchie) Uhl on Sunday, Sept. 19, 2021, at 2:30pm. It will be held at First Presbyterian Church, 1 E. Main Street, Lonaconing.

ROMNEY, W.Va. — Harry Herschel Kerns, 87, of Romney, died Tuesday, Sept. 14, 2021, at Hampshire Center. Memorial service to be held at a later date. Arrangements are by Giffin Funeral Home and Crematory, in Capon Bridge.