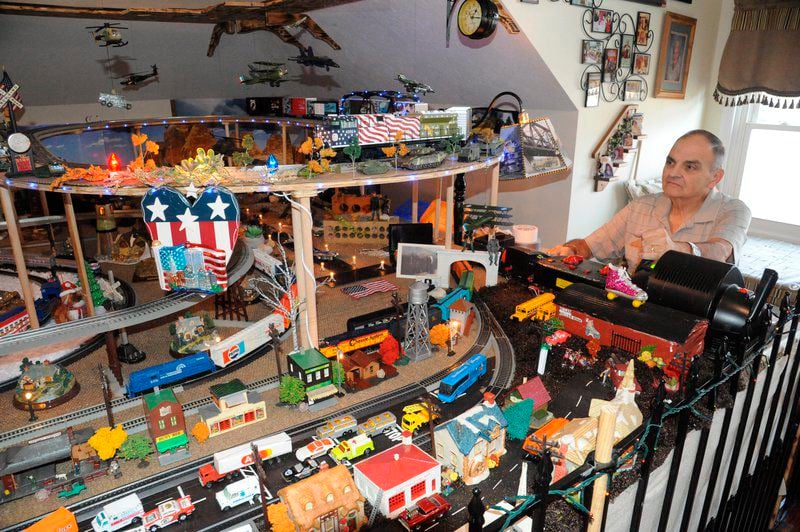 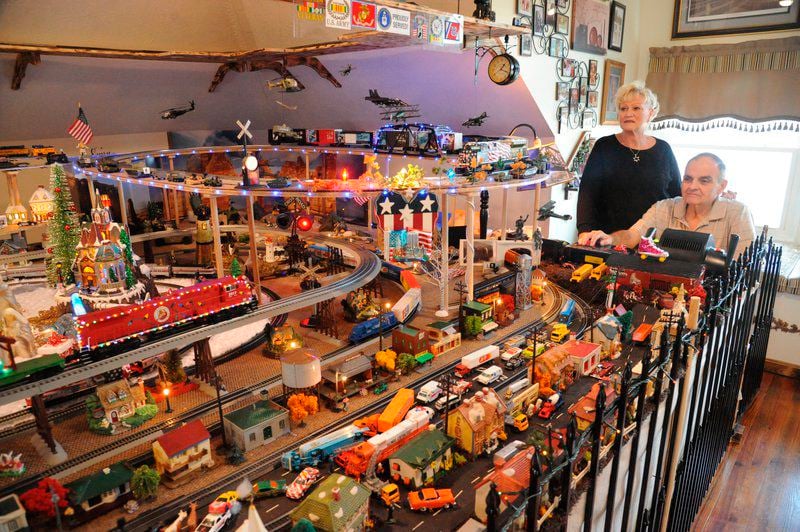 Velma Lewis watches as her husband, Allen, operates a model train collection that has expanded since he received his first set at age 7.

Velma Lewis watches as her husband, Allen, operates a model train collection that has expanded since he received his first set at age 7.

CUMBERLAND — Allan L. Lewis was 7 years old when his dad got him his first train set.

Since receiving that American Flyer, the 71-year-old has amassed a massive model train collection that he displays on the top floor of the home he shares with his wife, Velma.

The Lewises set out to turn the collection into a model train wonderland. Working from dinner to 11 p.m. every day but Sunday, they finished the project in just two and a half months.

“It’s been a lifelong dream of mine,” Allan Lewis said. “I still have a few boxes of trains that I’ve never opened.”

Set up on a 24-by-10 platform, the model train yard is awash of landscapes and train themes.

On one side is a winter landscape with a Coca-Cola themed train and a Thomas the Tank Engine. There’s a circus sprawl and train, an Amtrak that circles the central area and, in the spirit of the season, there’s a Christmas train with an American Spirit train next to it.

Two trains circle the floating platform above the train yard. As well, there are Chessie System, cargo and scenic trains and a Lionel that the Lewises received from a pharmacist friend before he died.

On the other side of the table, a desert landscape complete with a runway and fighter jets dominates the theme. It’s a section to honor members of the military, and specifically focuses on Desert Storm and Vietnam.

Lewis is a Vietnam vet himself, plays taps throughout the Western Maryland region and was disabled by Agent Orange during his service. While in the Army, he drove a tank and was a mechanic on others.

“There’s a car for each branch of the service and MIA,” Lewis said.

Lewis owned and operated Lewis Automotive and his sister owned the Hi-Lan roller rink. He now has models of both planted about on the platform. Front and center is what he calls a miniature Main Street Cumberland.

In all, he has 12 trains running at one time.

In an effort to add atmosphere, the pair put pictures of old Cumberland trains and U.S. Route 40 on the walls.

The couple want to find a way to allow children and members of the public to see the whole set, but that’s not a complete open door policy. For now, the plan is to have visitors by appointment. To see the display, call 301-729-5046 to set up an appointment.

“It’s all about the kids,” said Allan Lewis. “I’ll do everything I can to accommodate the people.”

The Lewises plan to do special December showings before closing down for the winter and opening back up beginning during the summer months.