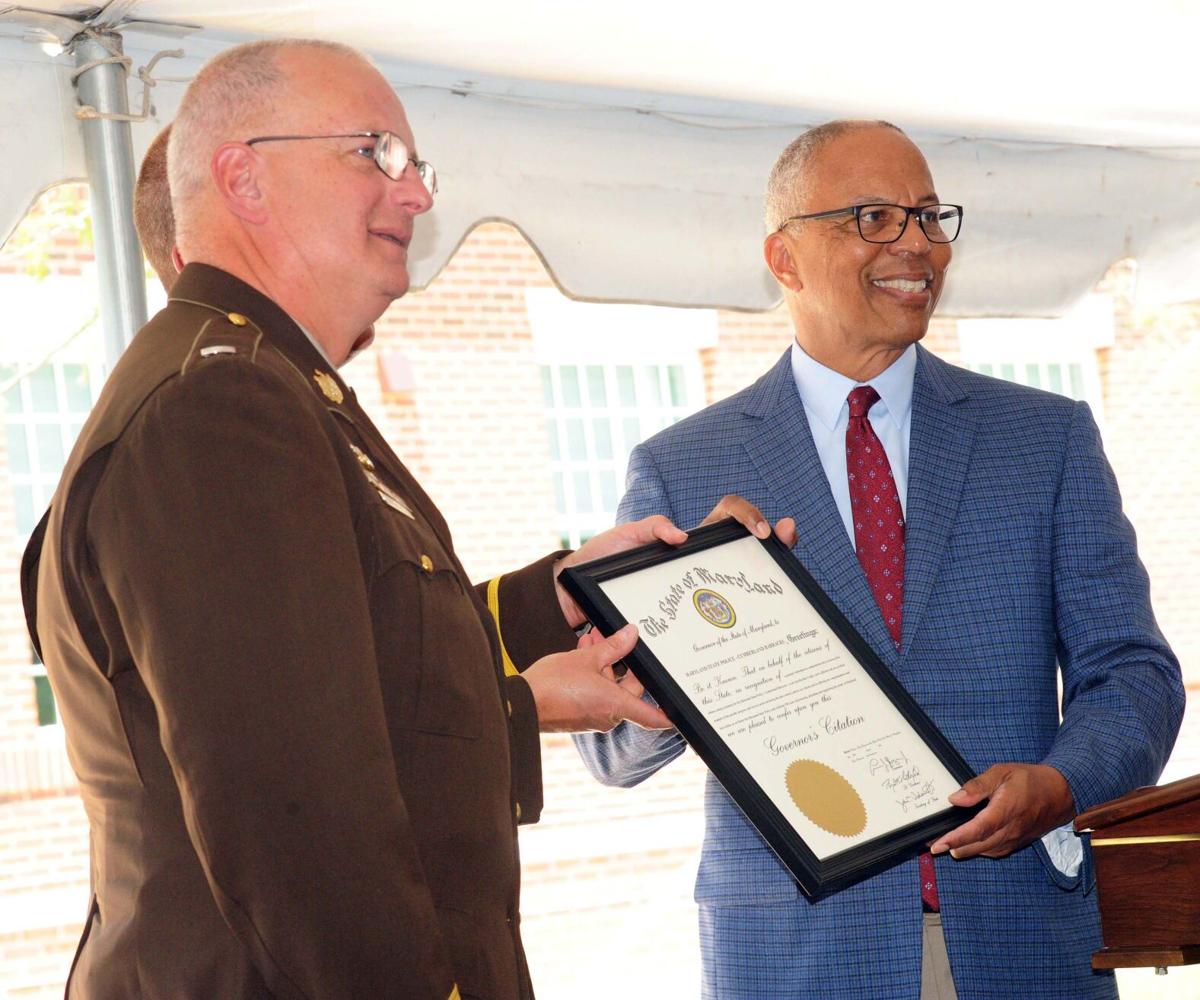 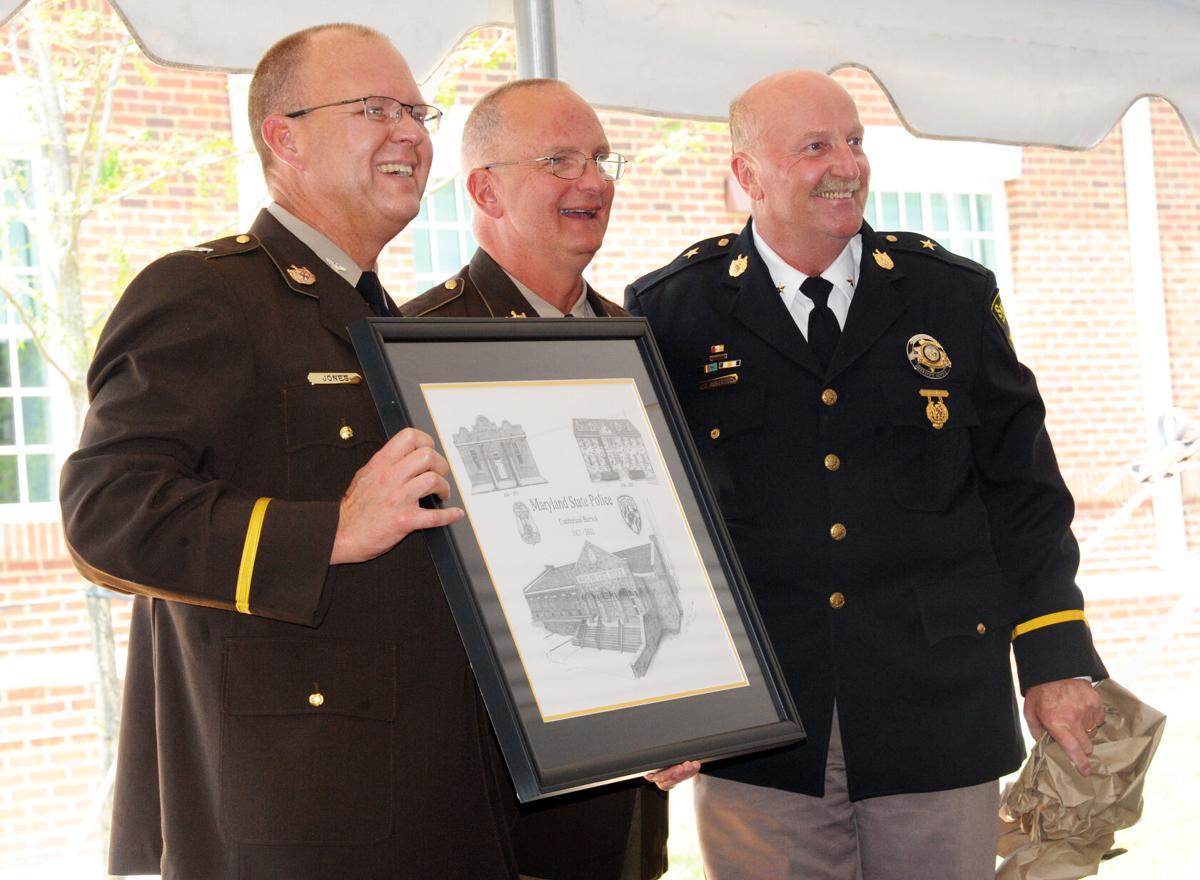 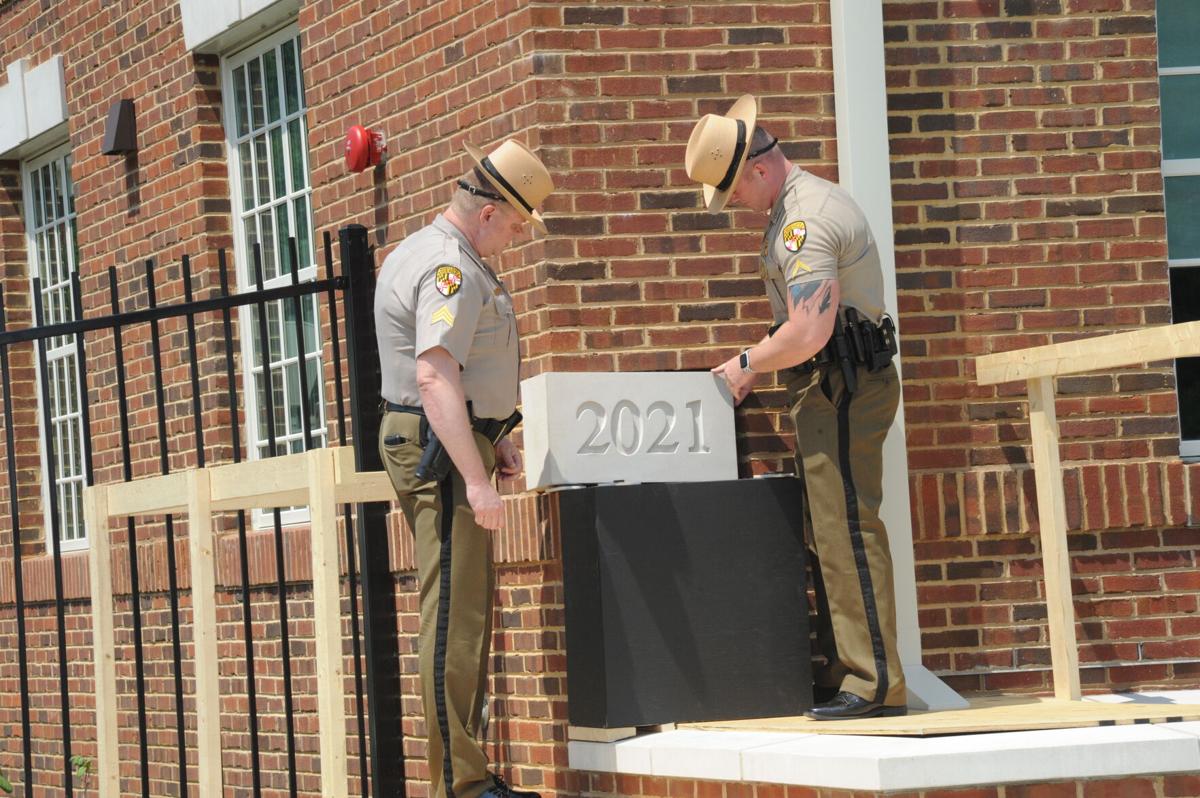 LAVALE — Two years after the aging Maryland State Police barrack on National Highway was demolished, a new ultra-modern facility was officially opened Thursday to the public.

“The new $13 million facility is significant for this community in Western Maryland and the state,” said Department of General Services Secretary Ellington E. Churchill Jr., who also noted that the opening coincides with the state police’s centennial celebration.

Lt. Gov. Boyd Rutherford led a host of dignitaries and elected officials who turned out for the ceremony.

Several hundred people attended the event — including former troopers and family members — and were seated beneath a large tent in the parking lot at the front of the brick, single-story structure at 1125 National Highway.

The two-acre site is the same location where the previous Cumberland barrack operated for 62 consecutive years prior to its decommissioning in November 2018 and its demolition the following summer. A groundbreaking ceremony in September 2019 by the General Services Administration and state police kicked off the construction project of Callas Contractors Inc. of Hagerstown and employing of various subcontractors.

“This is an example of one of our finest products in the world of capital construction,” said Churchill, who called the construction project a “significant investment in Allegany County.”

After touring the new building, Rutherford said the new barrack is “quite impressive” and “something we can all point to with pride.”

“This new barrack allows our troopers to better meet the evolving needs of the public in the 21st century,” said Rutherford, who voiced the state of Maryland’s appreciation for the dedication, sacrifice and professionalism that the state police provides non-stop to its citizens.

“The new Cumberland barrack enables our dedicated employees to not only continue, but enhance their full-service law enforcement operation, working in coordination with the Allegany County Sheriff’s Department, Cumberland Police Department and other state and local police departments in the region,” Jones said.

In addition to daily patrol and investigation, the new barrack is equipped with facilities to address all vital services needed to maintain and support patrol operations, such as the capability to perform expanded diagnostics and analysis of evidence locally, Jones said.

“This marks the commencement of the second century of service to Allegany County,” he said. “This building was designed to be as safe and as efficient as it can be and it increases safety for our troopers, our civilian employees and the community.”

The state-of-the-art facility was placed in operation in mid-May, allowing the barrack operation to return home after operating that last two years out of a temporary location at the Allegany County Emergency Operations Center in Mexico Farms, a location just east of the Cumberland city limits.

Tours of the 20,000-square-foot barrack were conducted during the official opening event that included placement of a time capsule and a cornerstone, and replacement of tributes that were previously located at the front of the barrack to honor several deceased troopers.

Approximately 50 personnel will be housed at the Cumberland barrack, including 39 sworn police officers from the field operations bureau, criminal enforcement division, CRASH team and the Office of the State Fire Marshal.

The facility includes an expanded vehicle servicing area, a radio room for allied communications capabilities, an indoor K-9 kennel, an enclosed sallyport to aid in safe transfer of detainees in the arrest processing area, a polygraph room and enhanced security measures, including utilizing of dozens of security cameras.

The site includes a fenced security area at the rear of the building for vehicles and a 330-foot radio tower tied to the statewide Maryland First Network System.

“I was beating on the superintendent for many years,” laughed Edwards when asked how the barrack finally became a reality. “This is very, very important to get this done, not only for the state police but also for the citizens.”

McKay said Edwards led the delegation in efforts leading to the new barrack in which he said “keeps public safety front and center.”

Jeff Alderton is a veteran Cumberland Times-News police reporter. To reach him, call/text 304-639-6888, email jlalderton@times-news.com and follow him on Twitter @alderton_jeff.