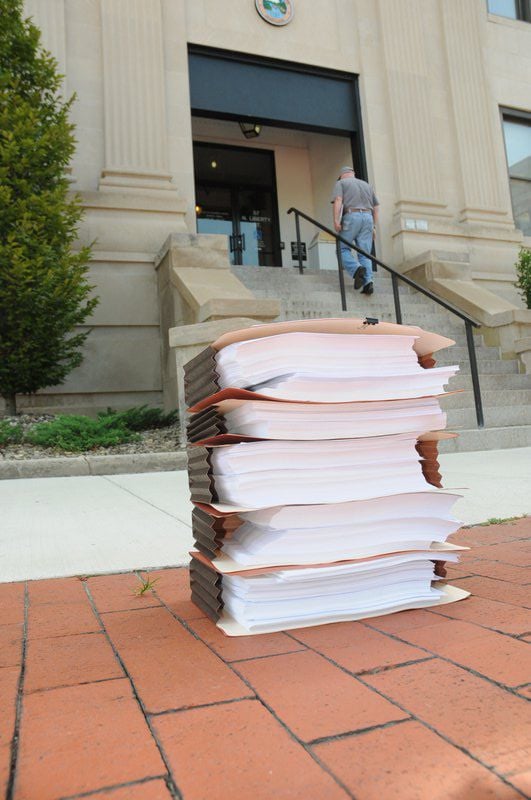 A stack of the more than 120,000 petitions opposing the Rolling Mill redevelopment project sits in front of Cumberland City Hall Tuesday. 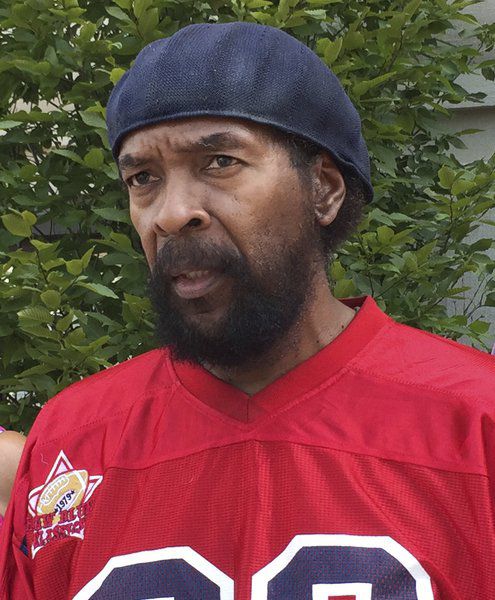 A stack of the more than 120,000 petitions opposing the Rolling Mill redevelopment project sits in front of Cumberland City Hall Tuesday.

CUMBERLAND — Cumberland Mayor Brian Grim vowed to move the Maryland Avenue Redevelopment Project forward, despite a petition with more than 120,000 signatures -- from folks who oppose the plan -- that was delivered to city hall on Tuesday.

"The project will move forward," Grim said in remarks made following the event.

Several property owners and representatives of organizations opposing the Rolling Mill-based urban renewal plan met at 11 a.m. outside City Hall on Tuesday. Those speaking in opposition of the project included Christina Walsh, director of activism and coalitions for the Institute for Justice; Nick Redding, executive director of Preservation Maryland; and Woody Gordon, Susan Bolyard and Larry and Debbie Darby, Rolling Mill property owners.

Although the city has not threatened eminent domain — which can be used by governments to acquire properties through a court-based condemnation process — the advocates remained concerned the city will invoke the process to seize properties from those refusing to sell.

"Eminent domain is for public use ... things like roads and schools and not private development like what is contemplated here for the Rolling Mill," Walsh said. "These homes are not for sale."

After speaking, the advocates were led to the second floor by Gordon where they delivered five stacks of paper containing the petition signatures to the city clerk's office.

Grim received the petitions and spoke in defense of the Maryland Avenue project. The mayor did not witness the speakers remarks outside nor did the advocates stay to listen to Grim's remarks made in the rotunda.

"My greatest concern remains for the citizens of the impacted area," Grim said. "Citizens are being sold a pack of lies by outside special interest groups who play fast and loose with facts in an effort to create a larger profile for themselves as well as generate significant contributions for their causes from national audiences."

Grim pointed out that Cumberland has a population of about 20,000. He said the majority of the 120,000 signatures on the petition, circulated online at Change.org, were from people in other states.

The Maryland Avenue Redevelopment Project includes acquiring 67 homes and a church in the city's Rolling Mill neighborhood off Exit 43. The properties, which lie between Maryland Avenue and Park Street and Emily and Williams streets, will be removed to transform the area into a commercial zone containing a national chain restaurant and business tenants.

"This plan concerns us because this is not the path to economic revitalization," said Redding. "This is not how you rebuild a community. Building a sea of strip malls is not the way a community rebuilds itself."

The opponents of the project said that a Freedom of Information Act was filed against the city and it revealed a "smoking gun" document that tied the city to the threat of eminent domain.

However, Grim said the "smoking gun" was nothing more than an unsigned document drafted by a developer for review by the city.

Grim said the residents in the target area are be "duped." He said he had no intention of meeting with "outside agitators."

"As far as I'm concerned, the petition presented today is worthless," said Grim. "I'll review it to see if there is substantial local interest in the project, but to date that interest vocalized to me has been overwhelming in support."

Gordon, Bolyard and Larry Darby, Rolling Mill property owners, each spoke outside City Hall. They cited home improvements, sentimental value and the convenience of the location as some of the reasons they did not wish to sell.

Gordon, who said he is in his 60s, is retired from CSX Transportation.

"I'm a retired railroader with 35 years service," Gordon said. "I specifically prepared my home for retirement. Just when you get to the part where you can really enjoy it this comes along."

Grim encouraged the property owners to resolve the matter.

"Outside agitators are doing a disservice by peddling the advice of don't talk to the city," Grim said. "With growth comes growing pains. It's time to embrace change."

On the front page of today's paper there is an article stating that over 120,000 people signed a petition concerning Rolling Mill, when based …

Here are the top stories of 2016 chosen by times-news.com readers in a recent poll: