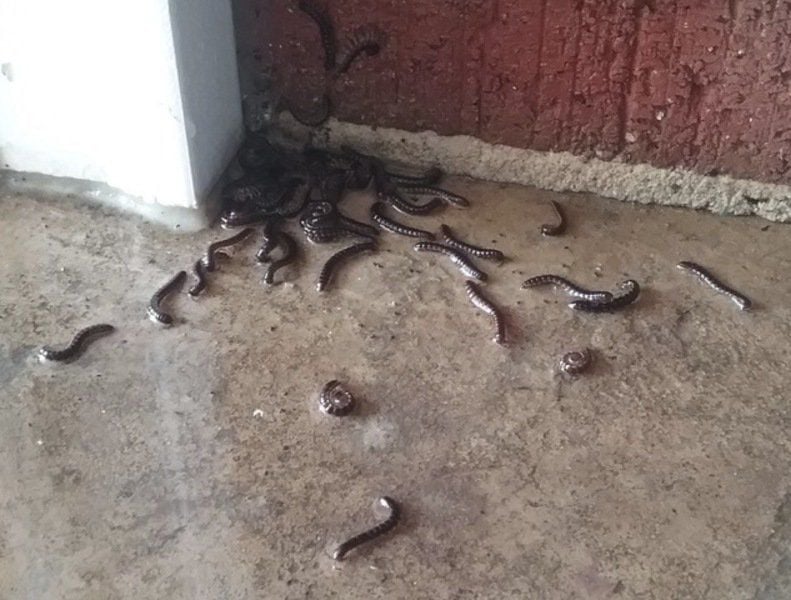 Millipedes lay still in a wet patch on the Cline's porch prior to being swept away. 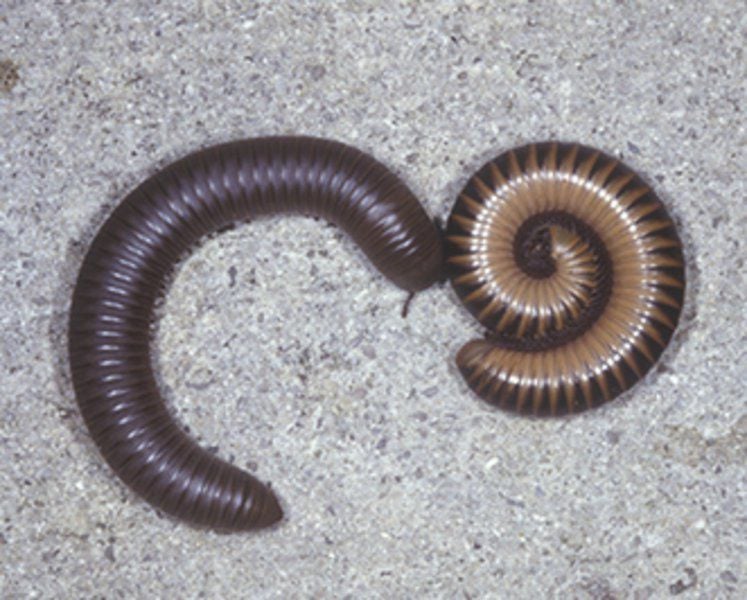 Millipedes can often come out in droves during stretches of particularly hot and dry weather, or when ground soil gets heavily saturated during periods of intense rain.

Millipedes lay still in a wet patch on the Cline's porch prior to being swept away.

Millipedes can often come out in droves during stretches of particularly hot and dry weather, or when ground soil gets heavily saturated during periods of intense rain.

CUMBERLAND — Carol Cline and her husband went to work recently pressure washing and cleaning up their porch, getting it crisp, white and immaculate. Imagine her surprise when the next day she found a black mass with thousands of legs had grown in one of the corners.

Upon closer inspection, it revealed to be a ball of thousands of millipedes, curled up and still. Cline swept the bugs up and scattered them in the yard.

“We had cleaned our porch off and pressure washed it,” Cline said Thursday, “and the next day there were thousands of them.”

Cline and her husband had recently purchased topsoil and wondered if that had something to do with the infestation. But day after day the bugs returned, and Cline swept or blew them off the porch.

Content to deal with it, Cline wasn’t going to investigate further until she was at the LaVale Plaza shopping center and noticed the bugs on plaza thoroughfares. This discovery prompted her to reach out to her brother in Short Gap, West Virginia, who reported that he, too, was enduring the pest’s overwhelming presence.

“It’s the time of the season when they hatch,” said Rory McCarty, of Bug Boys Pest Control, out of Ridgeley, West Virginia. “It’s a seasonal thing and this is the time of the year for them.”

Millipedes, according to the North Carolina State Extension Publications website, can often come out in droves during stretches of particularly hot and dry weather, or when ground soil gets heavily saturated during periods of intense rain. Once out, they have a tendency to search out dark, cool, moist environments to hang out in.

“They like cool weather and high organic matter,” said Ashley Bodkins, the Master Gardner Coordinator for the University of Maryland Extension in Garrett County. “They’re probably getting ready to migrate in the fall. For whatever reason, they’re gathering.”

“They must do their mecca at night when it’s cool,” said Cline, noting the bugs’ affinity for congregating during the night in the cool and damp areas of their porch. The battle has become something of a morning routine for Cline.

The “thousand-leg” bug is relatively harmless, preferring to munch on rotten plant materials, like leaves and such, rather than structural wood or clothing. They don’t carry human communicable diseases and don’t bite. They do, however, curl up in a c-shaped ball when spooked, and eventually dry up and release an unpleasant odor from secreting a cyanide-like compound.

“They don’t eat anything in the way of destruction,” McCarty said. “They’re just a pest bug like an ant. Nothing that’s a major issue.”

McCarty said that a few years ago his business was called to a farm to take care of millipedes that were layered so thick and dense a 5-pound bucket could be filled with just a couple of scoops of the shovel.

And as far as keeping them out of the house goes, the N.C. State Extension Program recommends minimizing moisture and removing debris where they can hide, especially around and near foundations. As well, it’s invaluable to keep foundations and the sills of exterior doors and windows sealed with caulk or door sweeps. Chemical solutions can be applied to outside door frames, but aren’t necessarily the most effective solution.

Once inside the house, millipedes, unless they can find a moist spot due to a leak or other factor, tend to have a short lifecycle due to lack of moisture.

“I wouldn’t be concerned,” Bodkins said. “Even though they’re creepy, you can suck them up with a vacuum.”

Bodkins also suggested putting a dehumidifier in the basement to dry them up, as that’s where they’re likely to congregate.

“I have a cat, so I’m pretty conservative on what I do,” Cline said. “I did find one in the house. It’s pretty awful.”

Cline said she uses an alcohol-based spray and has managed fairly well to keep the bugs out of her house.

“I guess the good thing is they don’t bite,” she said. “But that doesn’t negate the creep factor.”