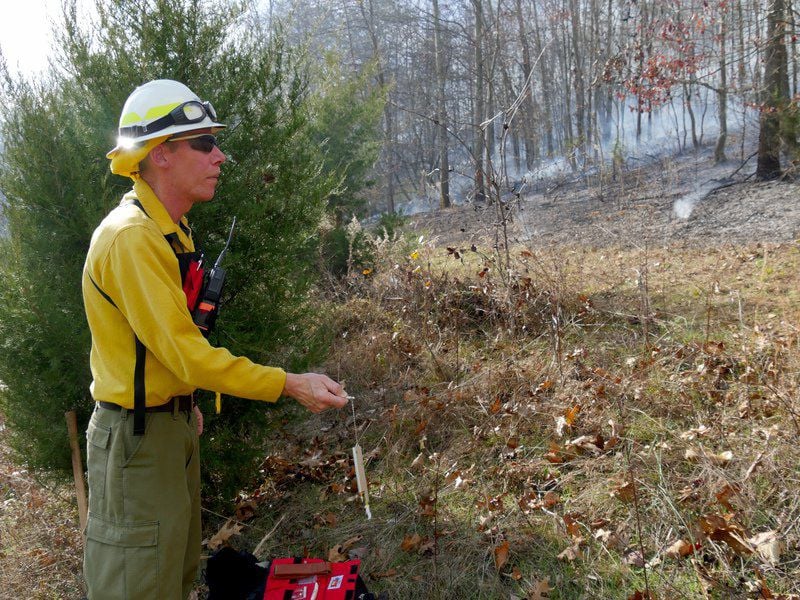 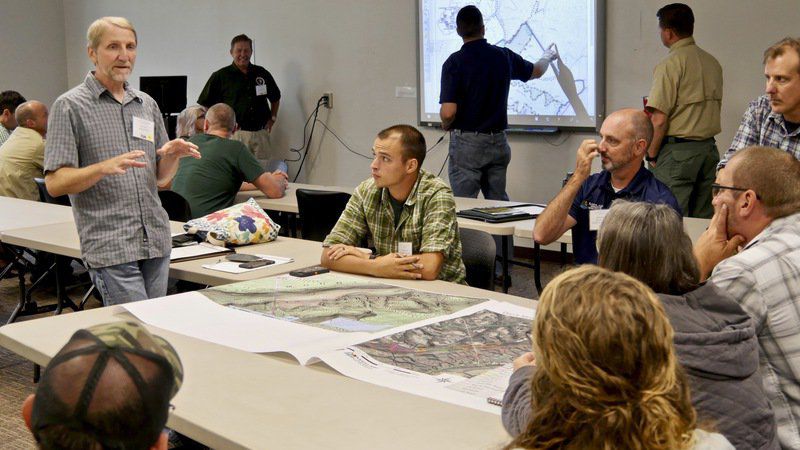 Fire practitioners from several states in a 2019 regional Fire Learning Network workshop on Wednesday plan an upcoming controlled burn to be held in Allegany County.

Fire practitioners from several states in a 2019 regional Fire Learning Network workshop on Wednesday plan an upcoming controlled burn to be held in Allegany County.

MCHENRY — John Fry recalled a few years ago when folks on a cruising jumbo jet alerted emergency officials on the ground after they spotted smoke over roughly 30 acres in the United States National Park Service’s New River Gorge area.

Fortunately, the fire wasn’t wild. It was intentionally set.

“It was a growing season burn. That’s why it was so smoky,” Fry said.

The event focused on controlled burning for healthy forest management in the Appalachians. Topics included how to foster collaboration among forest experts for landscape-scale restoration, as well as how to talk to the public about the work, and were followed by question and answer periods.

Fry discussed the goals and limitations of a prescribed-burn plan for the area in the Allegheny Mountains of eastern West Virginia.

“The plan that we have is outdated,” he said.

Fire personnel this spring completed prescribed burns on more than 2,000 acres on the Monongahela forest.

“We’re not treating as many acres as we should,” Fry said. “A lot of those projects are so small.”

He also talked of the importance of incorporating aerial ignition and drones into prescribed-burn plans, as well as the need to train more individuals to work on the projects.

“We have some of the highest valued timber in the east,” he said. “Prescribed fire in West Virginia is still relatively new.”

The controlled fires are used to promote tree growth and wildlife habitat with “minimal ground disturbance,” he said.

Hurdles for controlled burns include variable land topography, limited access to private land, and the public’s lack of familiarity with forest management programs.

The prescribed-fire goals include in-depth post-fire vegetation monitoring, he said.

“The goal of the fire learning network is to bring together fire practitioners,” she said and talked of the importance of large-scale and controlled fires for ecological benefit.

Thousands of years ago, forest burns happened naturally due to causes including lightning.

“There used to be fire all the time,” she said. “We don’t have wildfires like we used to. The landscape is changing.”

Today, federal and state agencies, as well as research institutions and colleges, are working together to get prescribed fires back on the ground, she said.

“It’s good for nature,” she said. “But it also makes it safer because if we do more controlled burns, we’ll have fewer wildfires and the result will be a healthier forest.”