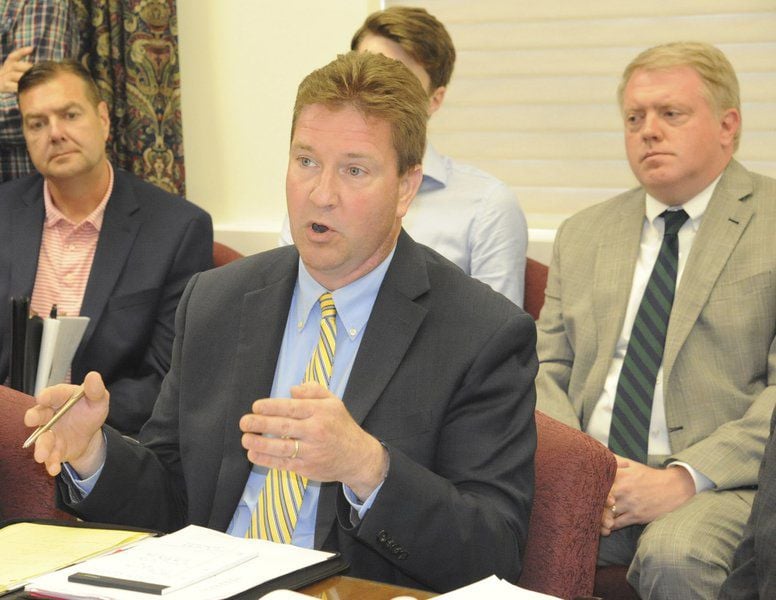 Acting Secretary James E. Rzepkowski of Maryland Department of Labor, Licensing and Regulation speaks Tuesday during a visit by Maryland’s Cabinet secretaries as part of Gov. Larry Hogan's show of support for nearly 700 Luke mill workers who will lose their jobs June 30. At right is Del, Jason Buckel. 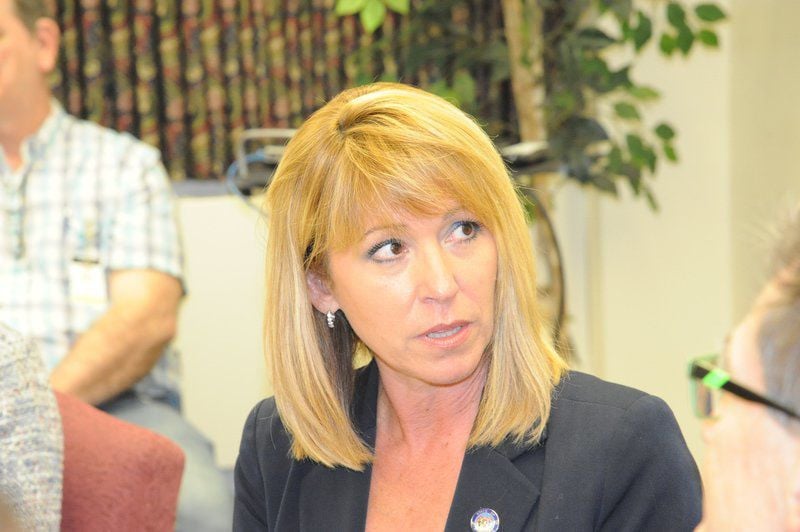 Acting Secretary James E. Rzepkowski of Maryland Department of Labor, Licensing and Regulation speaks Tuesday during a visit by Maryland’s Cabinet secretaries as part of Gov. Larry Hogan's show of support for nearly 700 Luke mill workers who will lose their jobs June 30. At right is Del, Jason Buckel.

CUMBERLAND — Tuesday’s visit here by Maryland’s Cabinet secretaries was Gov. Larry Hogan's latest show of support for nearly 700 Luke mill workers who will lose their jobs when the paper making factory closes at the end of next month.

But more than a show of support, officials announced the mill workers will qualify for unemployment benefits from the first day the mill is shutdown — even though they will receive severance pay wages. It has not been publicly disclosed how many weeks the terminated workers will be paid by Verso after the mill shuts down June 30.

"We are addressing the unemployment issue ... severance pay will be classified as special pay and not severance pay so that the displaced workers can file for unemployment the first day they are no longer employed by Verso," Acting Secretary James E. Rzepkowski, Maryland Department of Labor, Licensing and Regulation said. Displaced mill workers will also be assisted by the department in filing for unemployment benefits.

Rzepowski also announced that a job fair for Luke workers will be held on June 18. It will be the second one held in an effort to find jobs for workers. More than 1,000 people turned out for the job fair held May 14 at the Bruce Outreach Center in Westernport in which at least 70 employers were present.

"We had discussion about what is and what is not happening at the Luke mill. We put it on the table what we would like to see," said state Sen. George Edwards, as head of the Western Maryland delegation, in opening comments.

Local officials and visiting state leaders met for about an hour-and-half before the media was addressed about the visit, Edwards said.

Edwards thanked Hogan for his immediate and ongoing attention to mill closing.  "He jumped on it right away," Edwards said.

Maryland Department of Commerce Secretary Kelly M. Schulz said the governor "has made this his top priority for the whole administration." She said the administration is working on the Luke mill issue non-stop and "on an hourly basis."

Asked by the Times-News how many companies have expressed some level of interest in purchasing the mill, Schulz said about a dozen companies have indicated interest. She declined to be specific about those contacts due to ongoing communications that require non-disclosure.

When asked about the prospect of finding a buyer, Edwards said he was positive but not "overly optimistic."

Del. Jason Buckel urged the state leaders to make an ongoing and continual commitment to citizens of Western Maryland.

"We are going to have to change our economy and figure out ways to help us have a thriving economy 10 years from now that looks like a 21st-century economy," Buckel said.

Del. Mike McKay commended Hogan for the state's continuous support for the mill workers. "This administration has been a blessing to us," he said.

Del. Wendell Beitzel said efforts are continuing to address the changing "needs and scenarios of the Upper Potomac River Commission and its Westernport plant."

Beitzel, who has served on the UPRC board of directors for the past 30 years, said the UPRC has been in contact with Verso about plant operations that are mostly funded by the Verso company with the mill operation.

Beitzel made his remarks after Maryland Department of the Environment Secretary Ben Grumbles said efforts are underway to establish water lines from the Westernport plant to the towns of Westernport and Piedmont, West Virginia. He said the agency is continuing to address the concerns for water supplies and waste treatment processing brought on by the imminent shutdown of the mill. Grumbles said funds are available for the water line projects.

More than two dozen state and local officials, including several Maryland department secretaries, took part in discussions held in a conference room at the County Office Complex on Kelly Road.

The visit by officials of the Hogan administration also included a late-afternoon meeting with United Steel Workers Local 676 officials at the Holiday Inn at LaVale.

The Cabinet secretaries' visit took place as USW Local 676 officials and representatives of International Brotherhood of Electrical Workers Local 1653 met Tuesday with Verso officials in the second week of effects bargaining talks. The talks are legally required in the face of the announced mill closure to determine what benefits will be awarded to the displaced workers in terms of health care and pension plans.

Severance wages are typically determined by labor contractors already in place at the time of the announced closure. Verso and Local 676 — representing 515 mill workers — ratified a new three-year contract at the end of March after having worked the previous two years without a labor pact.

Effects bargaining between Verso and union officials was expected to conclude Wednesday, according to USW officials.