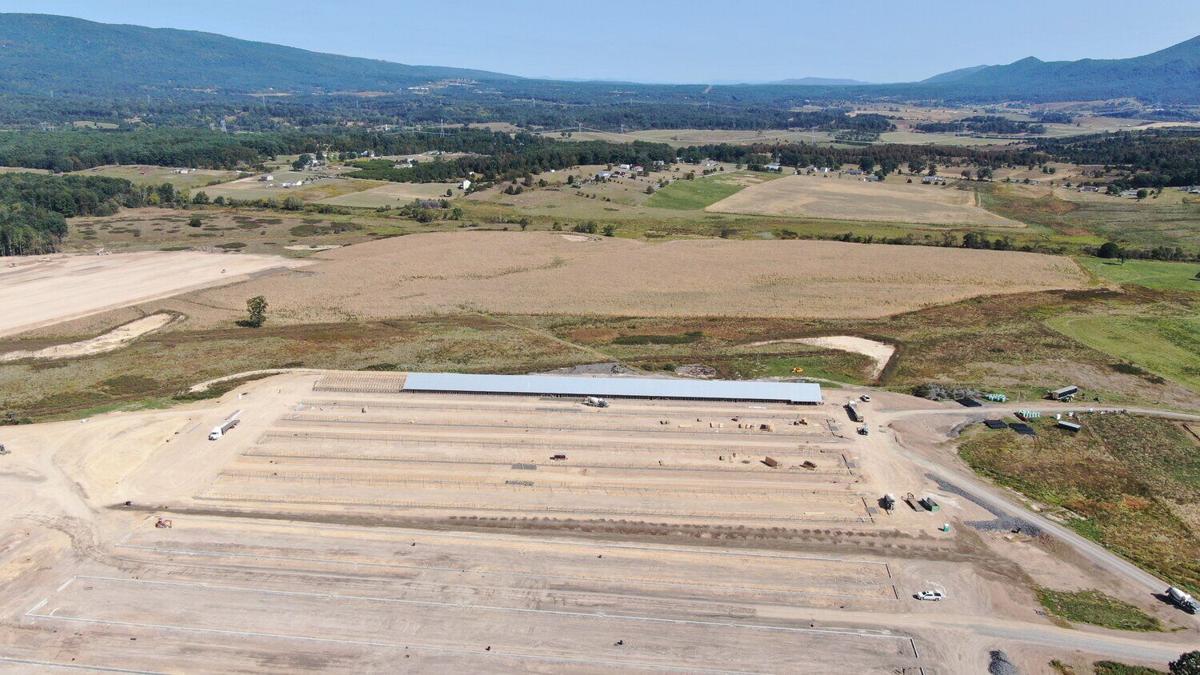 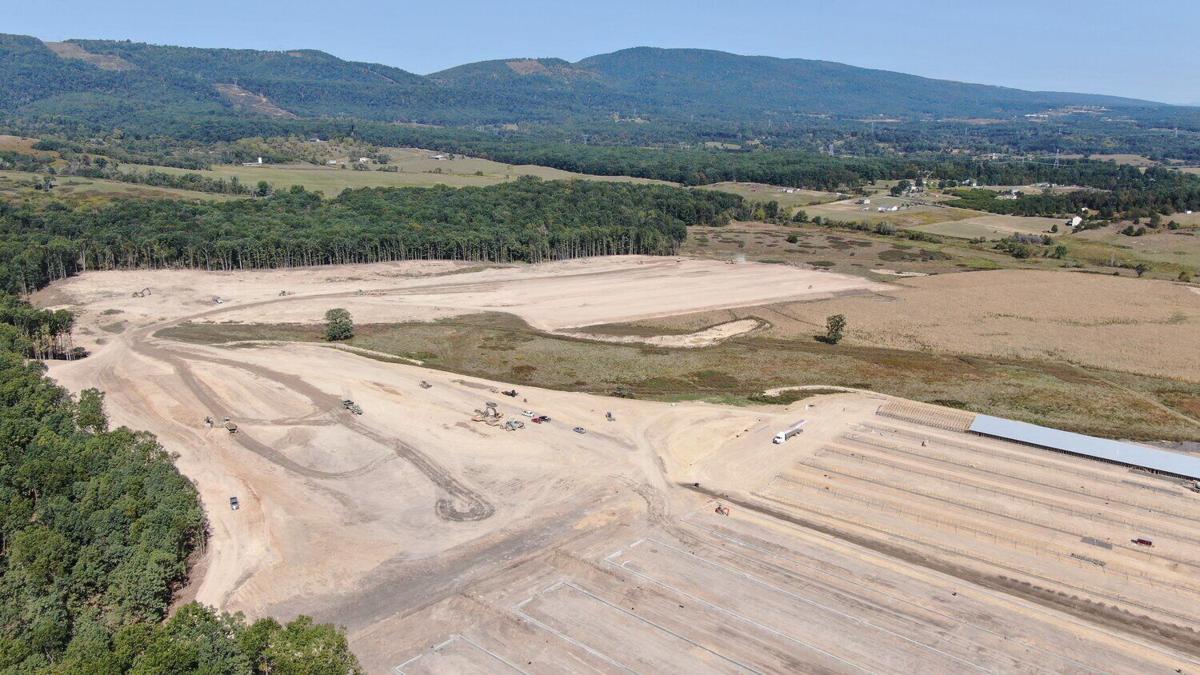 This drone photo taken by Brent Walls of the Potomac Riverkeeper Network show the size and scale of a poultry cultivation facility being built in Hardy County. 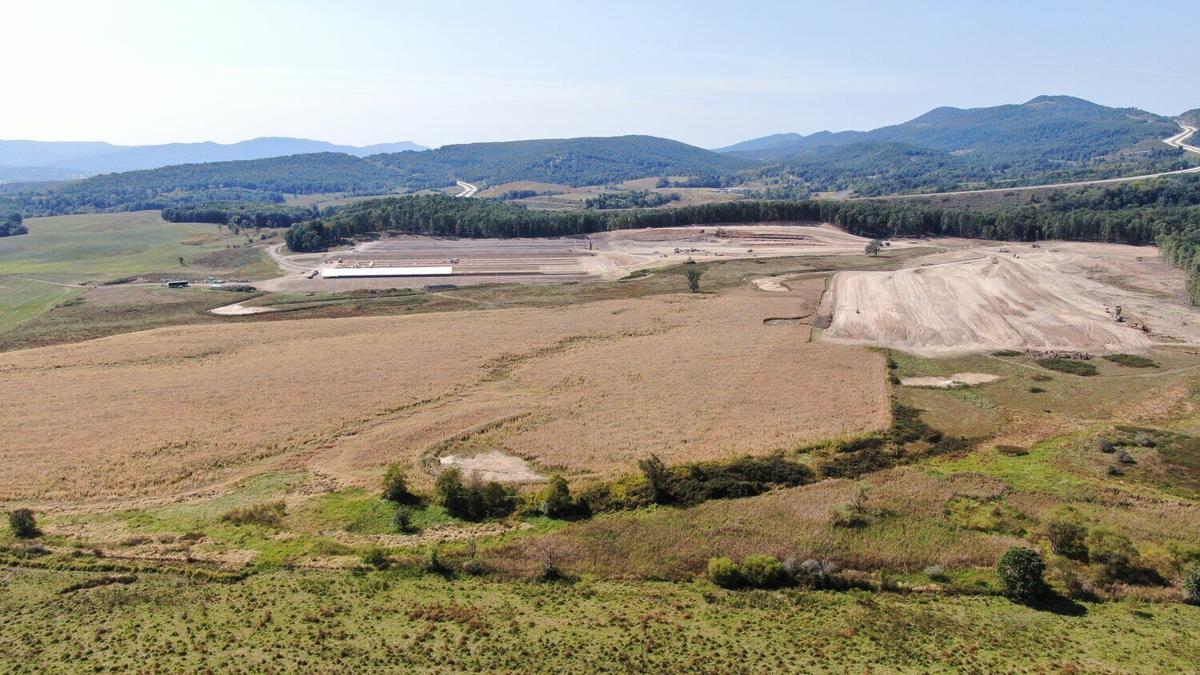 This drone photo taken by Brent Walls of the Potomac Riverkeeper Network show the size and scale of a poultry cultivation facility being built in Hardy County.

From his home located in the Becky Webb subdivision about five miles from the county seat of Moorefield, Pendleton first observed that work crews had started removing trees and grading the land. He hadn’t heard of any construction projects slated to start. Neither had any of his neighbors in the community of 37 homes, he said in a recent interview.

In time, Pendleton, a retired state employee, learned that his land borders a 95-acre site the county approved last February for the construction of 20 chicken houses that, when completed, will each be 704 feet long and 63 feet wide. They can hold up to 50,000 birds at a time, for a total of about 1 million chickens per rotation. The $10 million project is slated to rely on well water sourced from five wells, rather than the county’s public water supply, and could use as much as 100,000 gallons of water daily.

Robert Williams is a local real estate agent and developer who also sits on the county Planning Commission and the board of directors for the Hardy County Rural Development Authority. He applied for the associated permits for the farm last year. The construction was approved eight days after his initial submission by Melissa Scott, the county’s former planning director.

Per online West Virginia Secretary of State records, Williams is one of the registered officers of Jeg Poultry, one of two entities that comprises WV Poultry Partners. The other is North Carolina-based Gallus Equity Partners, which owns and operates several other large poultry farms throughout the country. Pilgrim’s Pride — which has a plant in Moorefield and is Hardy County’s largest employer — has a contract with WV Poultry Partners to provide the chicks that will be raised in the houses.

Citing the contract with Pilgrim’s Pride and deferring to them, Williams declined to answer questions, including inquiries about the specifics of the project and his involvement in Planning Commission discussions on the subject. Representatives from Pilgrim’s Pride did not immediately respond to a request for comment.

In conversations with Williams about the construction, Pendleton said he learned that the chicks provided by Pilgrim’s to their partner farms grow to adulthood in about two months’ time. They’re then taken for slaughter and processing for sale. Representatives from Pilgrim’s were concerned about low production, Pendleton recalled Williams telling him: Where they wanted to process around 220,000 birds a month, they were processing around 200,000 instead.

The high-volume farms, Pendleton said, are Williams’ proposed solution to that problem.

“Robert said he was doing it because he was concerned that Pilgrim’s was behind in production, and was afraid that, you know, they might have to start laying off people and cutting back and that kind of thing, which is a crock,” Pendleton said. “Pilgrim’s isn’t going anywhere.”

By email, Williams declined to respond to a question asking him to characterize conversations with members of the community he has had related to the farms.

After learning what was underway, Pendleton and others formed the Concerned Citizens of Hardy County group on June 15. Looking for organizing support, Pendleton contacted different advocacy groups, explaining his concerns.

On June 23, Pendleton and fellow group members met with members of the Planning Commission to discuss their worries about what development of such a massive operation might mean for those living nearby. Pendleton told the Times-News that he feels their decision to ask questions about the permitting process for the plant prompted officials to begin soliciting feedback for changes to the existing zoning ordinance.

“Let me put it this way: Had we not requested a meeting with the planning commission, the one for June 23, I’m not so sure that all this that has happened would have occurred,” Pendleton said. “There may have been some discussion among the members who would have said ‘OK, maybe we need to take a look at this.’ But I don’t think it would have gone this far, I really don’t.”

Through SRAP, Pendleton said, the citizens’ group sought their own outside assessment of the project. They solicited help from Michigan-based Grobbel Environmental & Planning Associates, which on Aug. 30 submitted a letter with its findings to county planning office manager Nicole Rohrbaugh. That letter, along with the results of the review of the zoning ordinance, was presented when the commission met in September.

The review that Pendleton’s group sought charged that the permits for the two large farms should not have been granted “due to inadequacies within the Hardy County Zoning Ordinance,” per a copy of the letter obtained by the Times-News.

In emails from former planning director Scott to county health Administrator William Ours also obtained by the Times-News and dated Feb. 13, 2020, Scott inquired whether there was “any special well permitting necessary for the 20 poultry house complex.”

“They have decided to do all wells and no public water,” Scott wrote. “Even though we aren’t allowed to call it such, this is industrial-level water use.”

Ours replied that there was no special permitting process required. When Scott responded that she was going to use Ours’ email as a “sign off” to justify approving the permit and asked if he had concerns, Ours replied that while he did not, he knew of some on the planning commission who did.

“They are worried about how much water this operation will use and how it will affect the water table in the area for other people using wells as their water source,” Ours wrote before asking whether state approval was necessary.

Scott wrote back that “amount is a concern,” but said she intended to approve the permit regardless.

“I asked the (West Virginia Department of Environmental Protection) division that handles large-quantity users and they confirmed that (all) poultry is exempt from that requirement — I have that email. The person forwarded it to another DEP department and I haven’t heard anything back. I just emailed them to say I am issuing the permit unless they give me reason not to.”

Former Hardy County Commission President Harold Michael, who presided over the body when the project first came up last year, told the Times-News in a recent interview that in his opinion, it was “very unusual” how quickly and quietly Williams’ applications were approved.

He and the other members of the county commission received no word from Scott about the application at all, Michael said. An article published in the Moorefield Examiner in May was the first he heard of the project, he said.

“Of course it was a shock to us to find out that that the process had already happened,” Michael said. “We reached out to an attorney that we deal with to see if it was possible for the commission to take any kind of action to stay the permit or to basically put a hold on it until we had a chance to react, and of course we were told no, legally, there’s nothing we could do about it. So my major concern from the county level was why the planner went through the process to approve it and all that, and nobody knew anything about it.”

Michael was also surprised, he said, at the relative weakness of state regulations on such operations.

“I thought for sure that the state DEP would have either put really stringent requirements on the permit process or done something but basically from what I understand, they just kind of rubber-stamped what was sent in,” Michael said. “And so now we’re stuck with two of these things.”

Michael, who previously represented Hardy and Pendleton counties as a delegate in the state Legislature, recalled an instance from his time in office when the DEP got involved in a poultry house project in Pendleton County. In that case, Michael said, the houses in question weren’t as large as the ones being built in Hardy County, nor were there as many.

“They were fairly close to the property lines,” Michael said of the poultry houses in the Pendleton County case, “and the DEP got involved in that they were concerned about runoff. ... It ended up where … the DEP required them to do something, and that was just for two or three houses. So when I heard you know, 15, or 20 houses I thought ‘I can’t imagine the DEP will approve this,’ but of course they did.”

Pendleton reiterated throughout the course of several interviews that his issue is not with Williams personally, or even with Pilgrim’s Pride. His concern, he emphasized, is what impact the large-scale farms being constructed could have on the physical and financial well-being of his neighbors.

Two work sessions with the planning commission are scheduled in March that will allow concerned parties to converse with the board. The first, on March 11, will allow Pendleton and other community members to state their case, followed by agricultural stakeholders on March 16.

“When we do our presentation in March, we’re not going to mention (Williams’) name,” Pendleton said of the coming meetings. “For one thing, he’s part of the planning commission, but it’s just about the effect of the (large-scale farms) and what it’s doing to the community at large, to the small farmers, to the health and all the other issues that we brought up. That’s the main point. It doesn’t matter. I mean, it could be anybody else in the community doing this and it would be the same effects.”