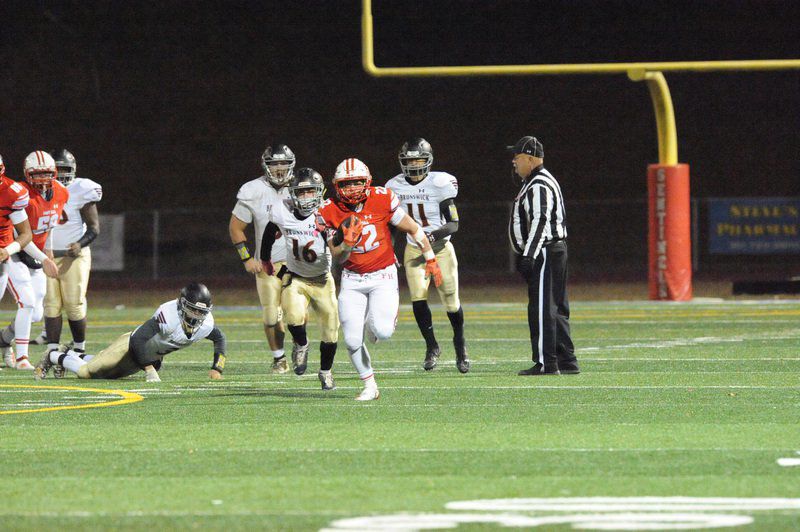 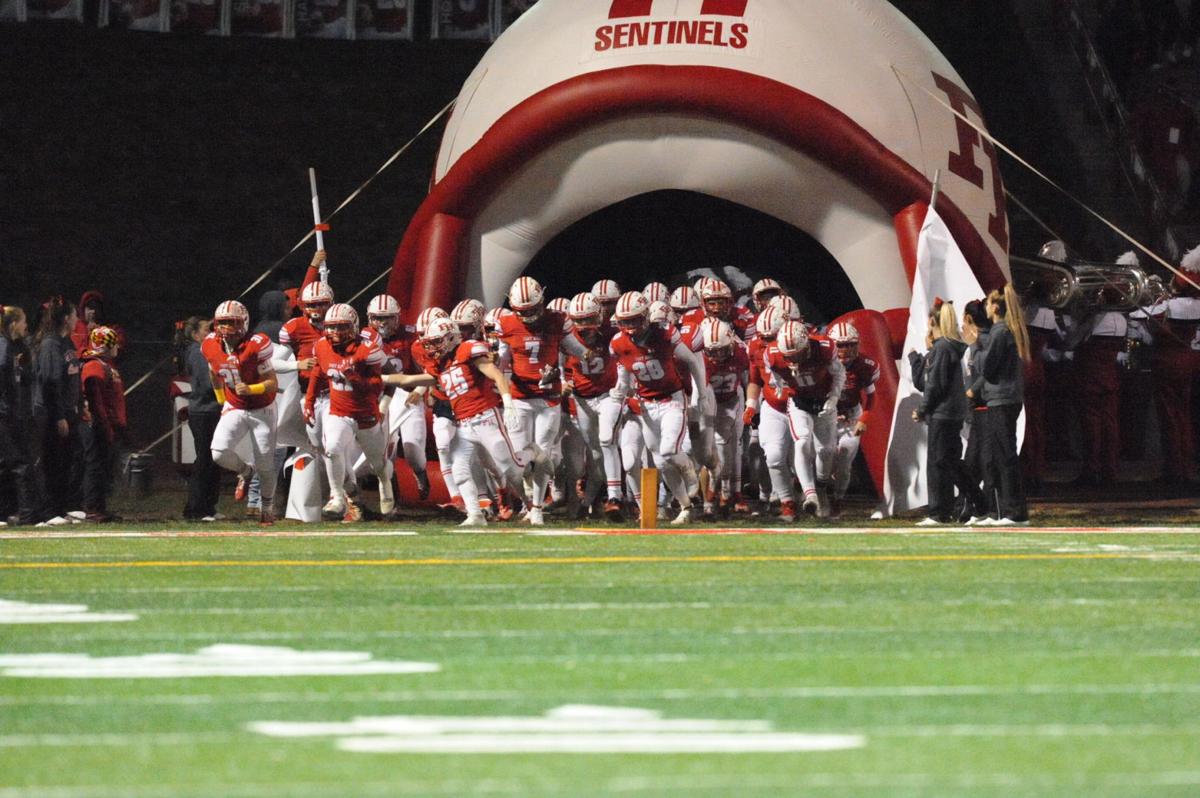 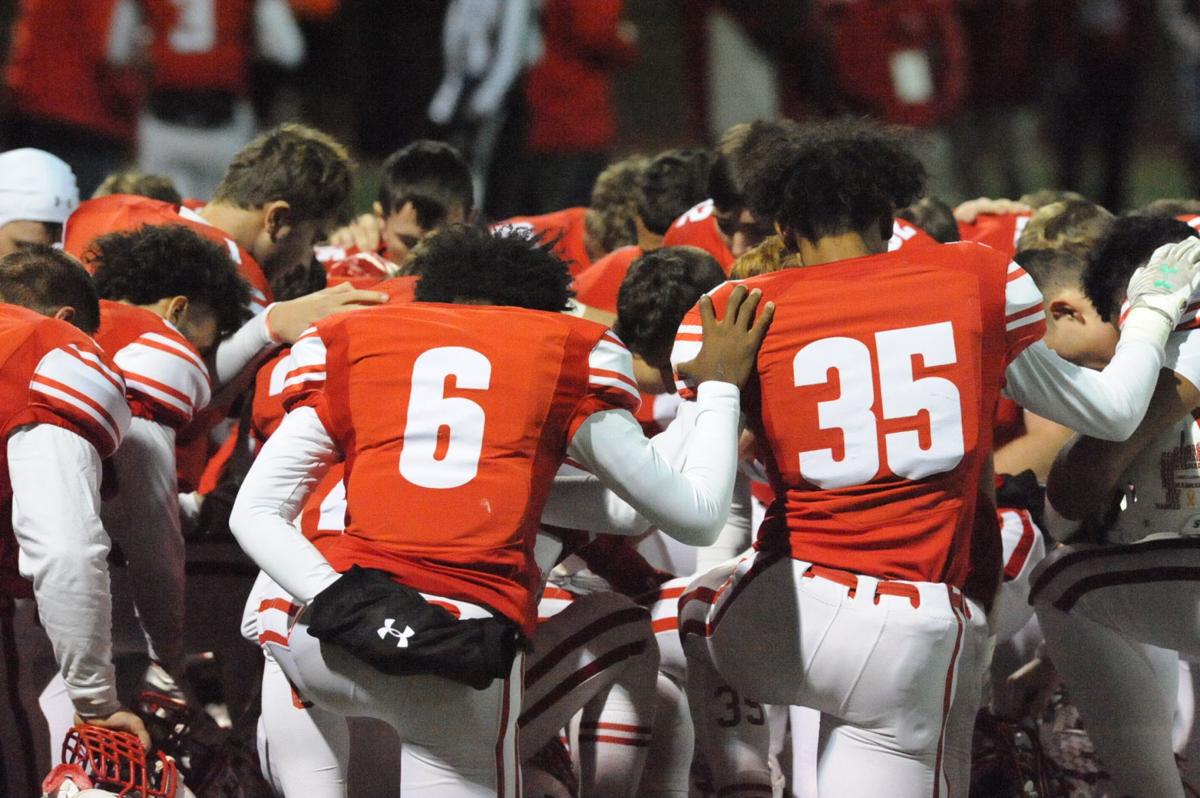 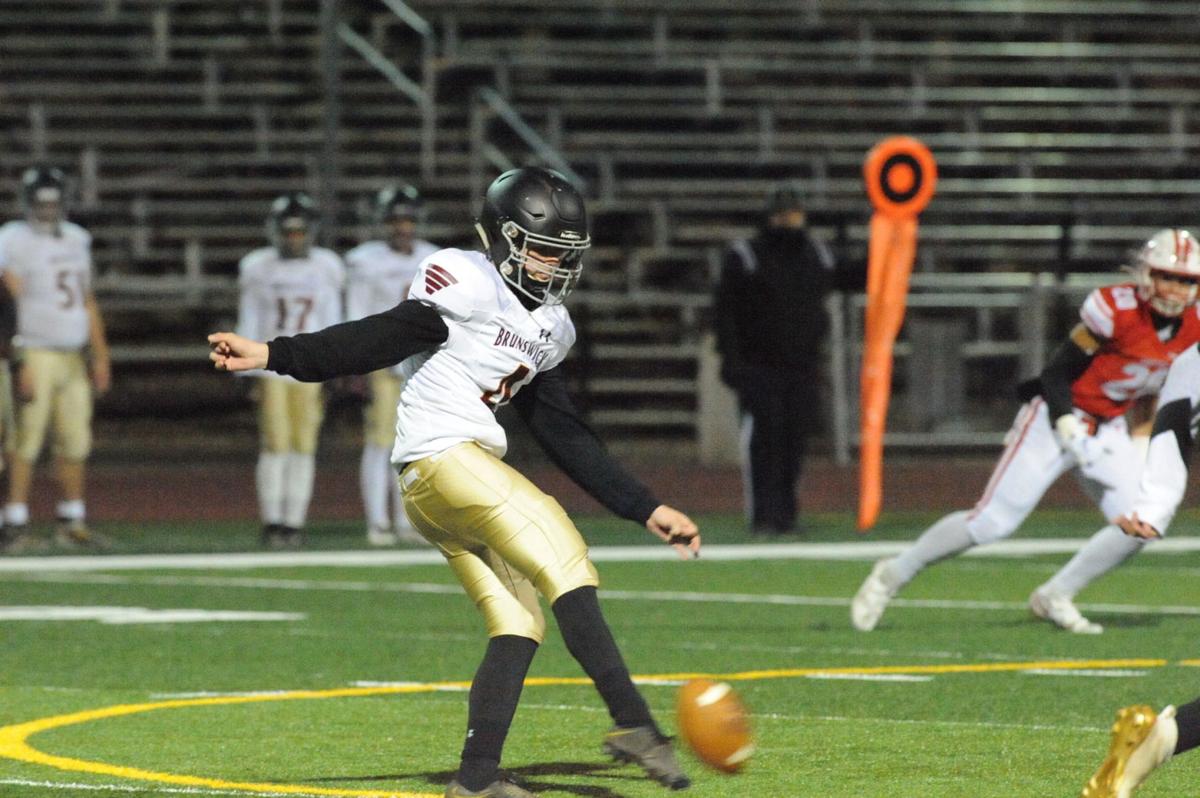 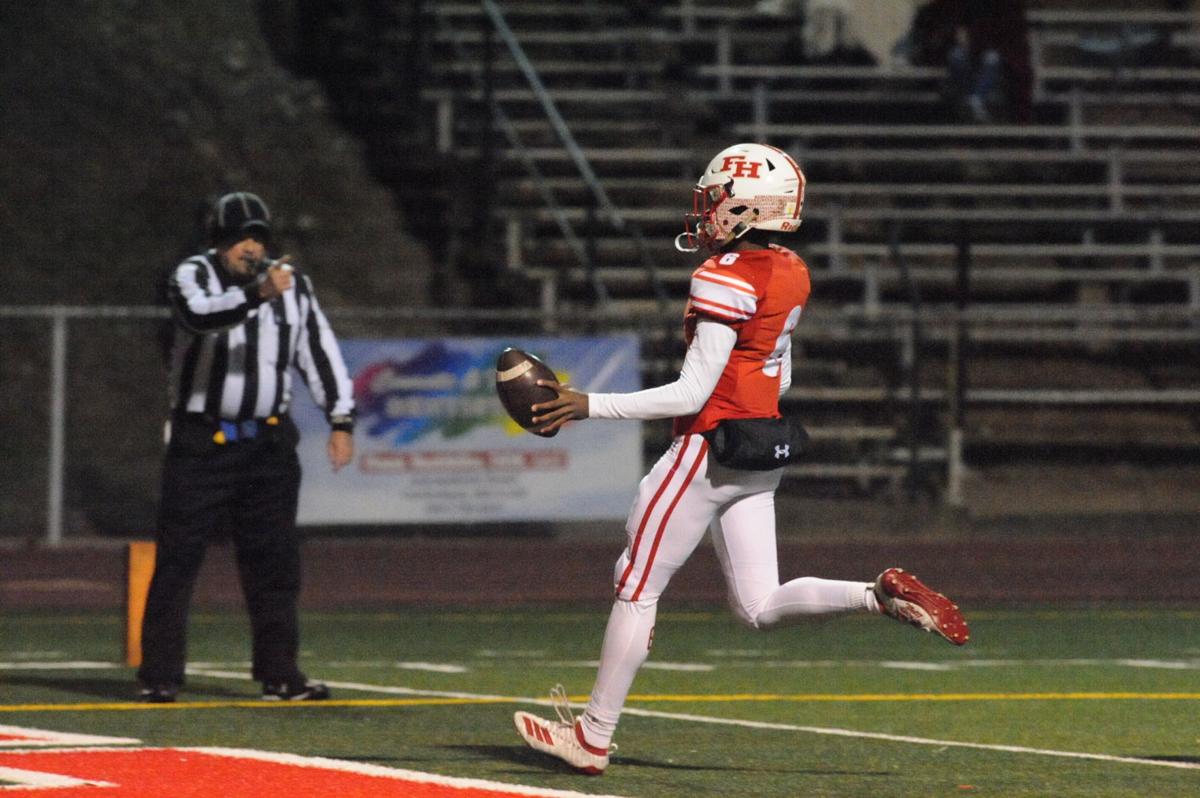 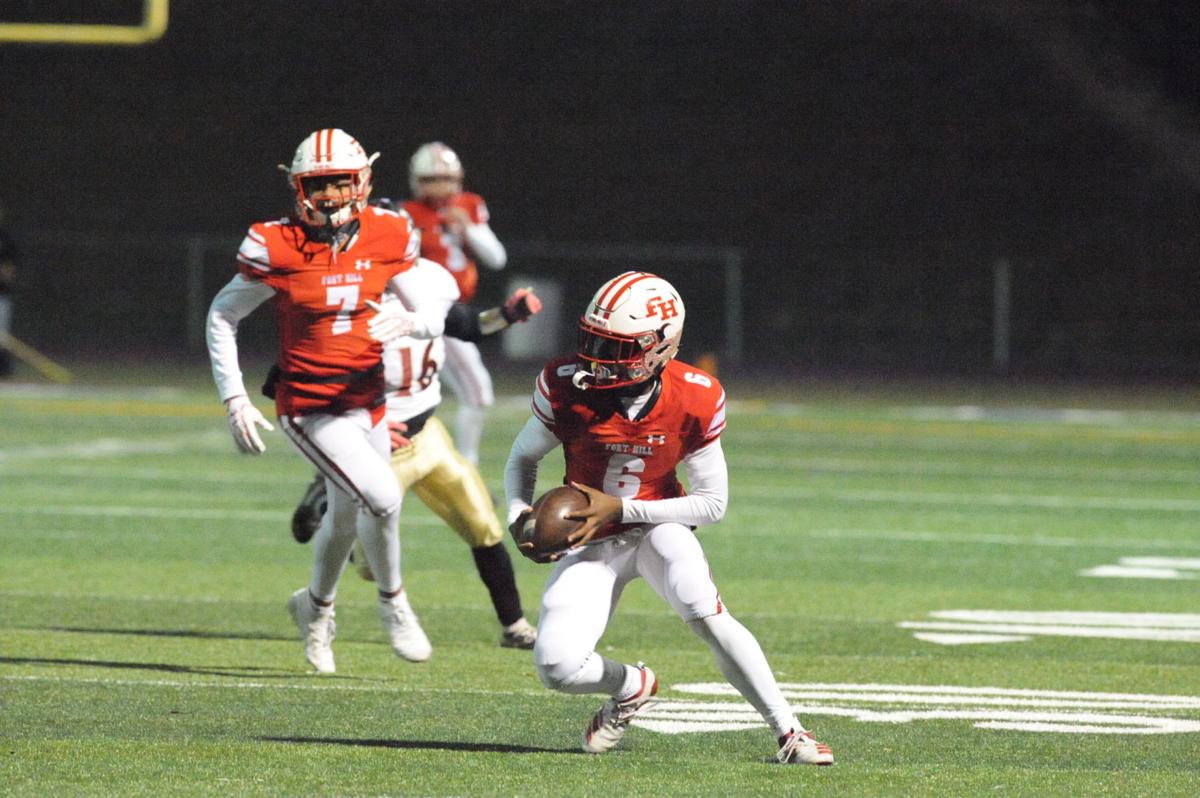 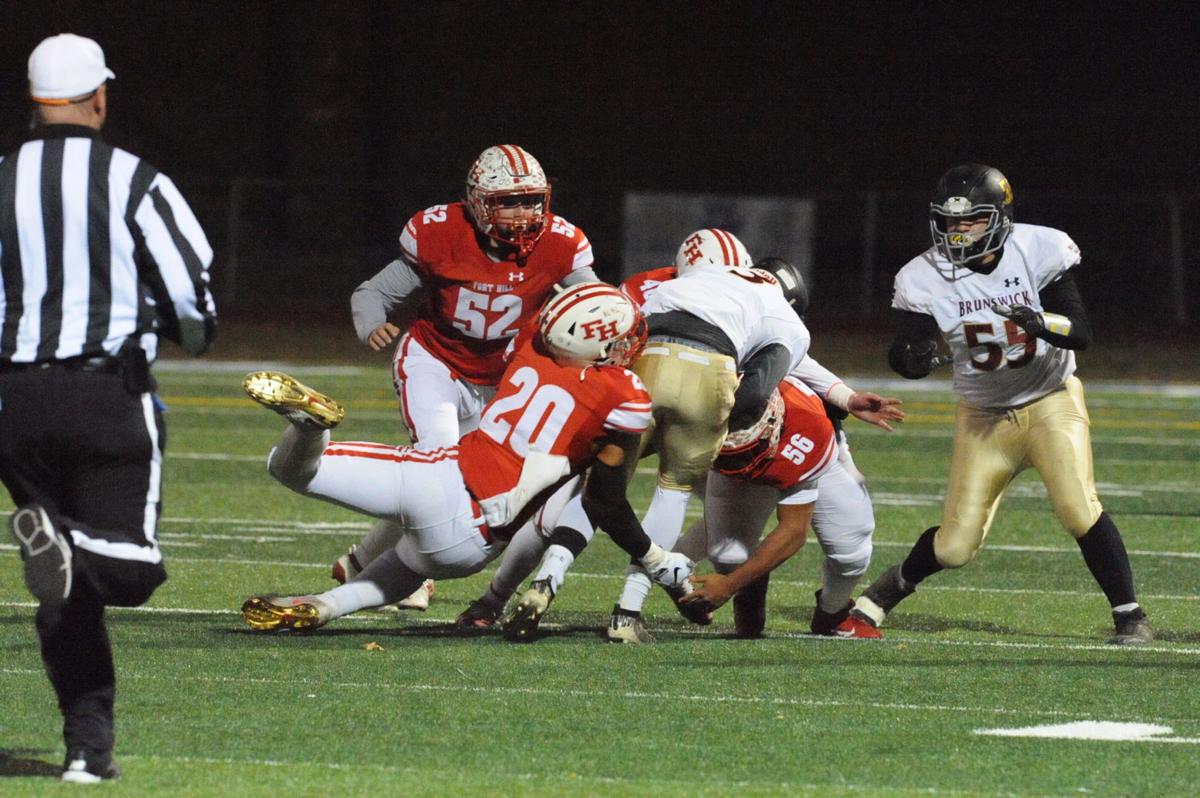 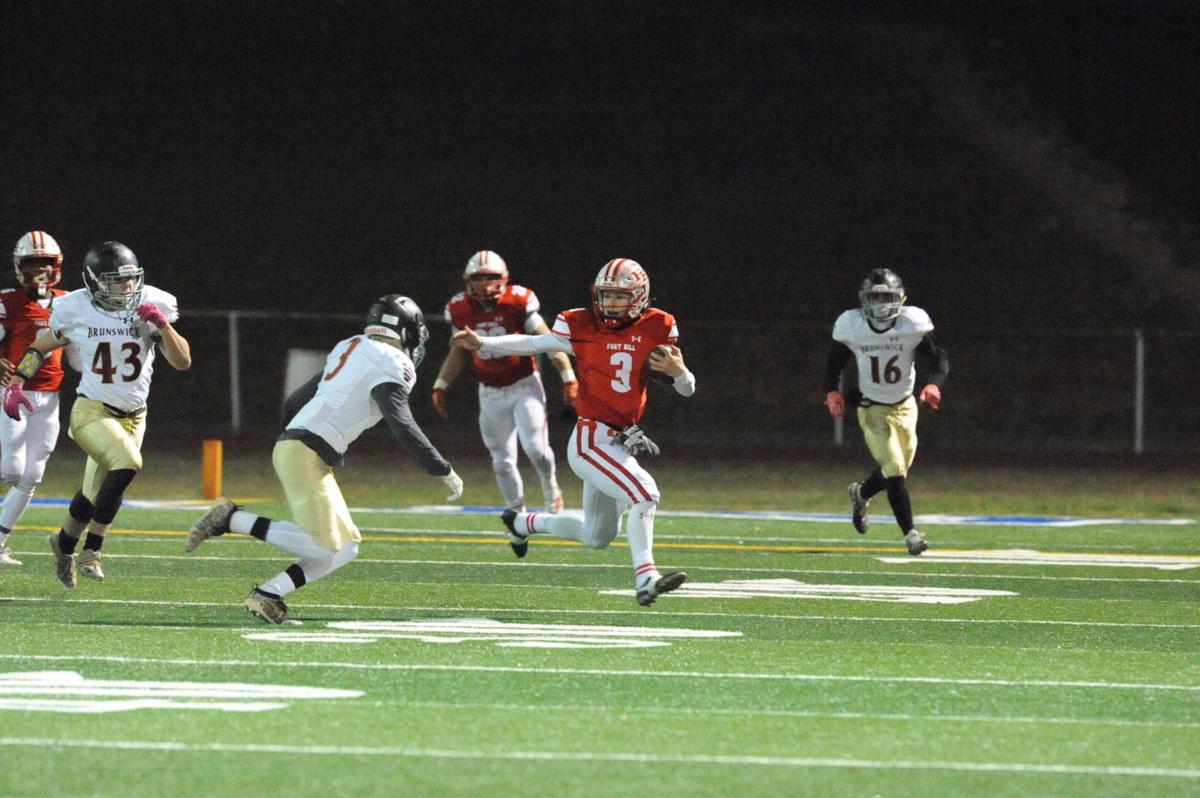 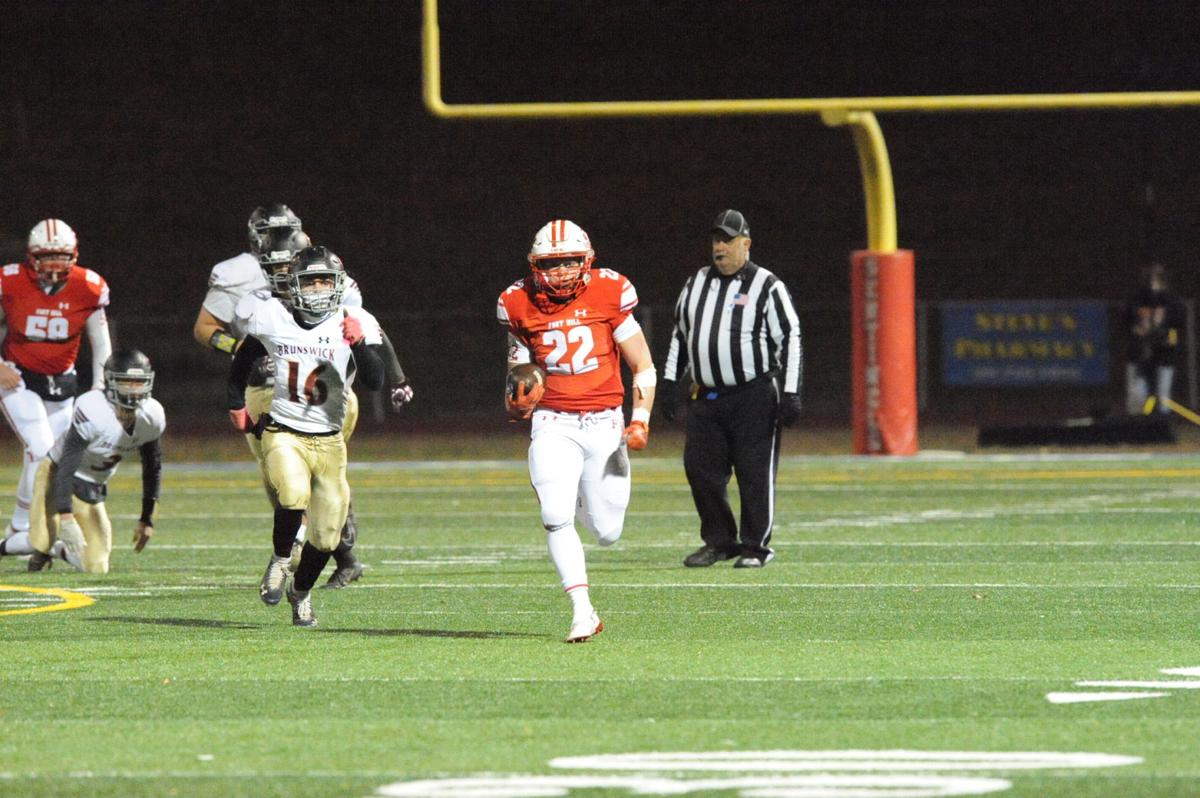 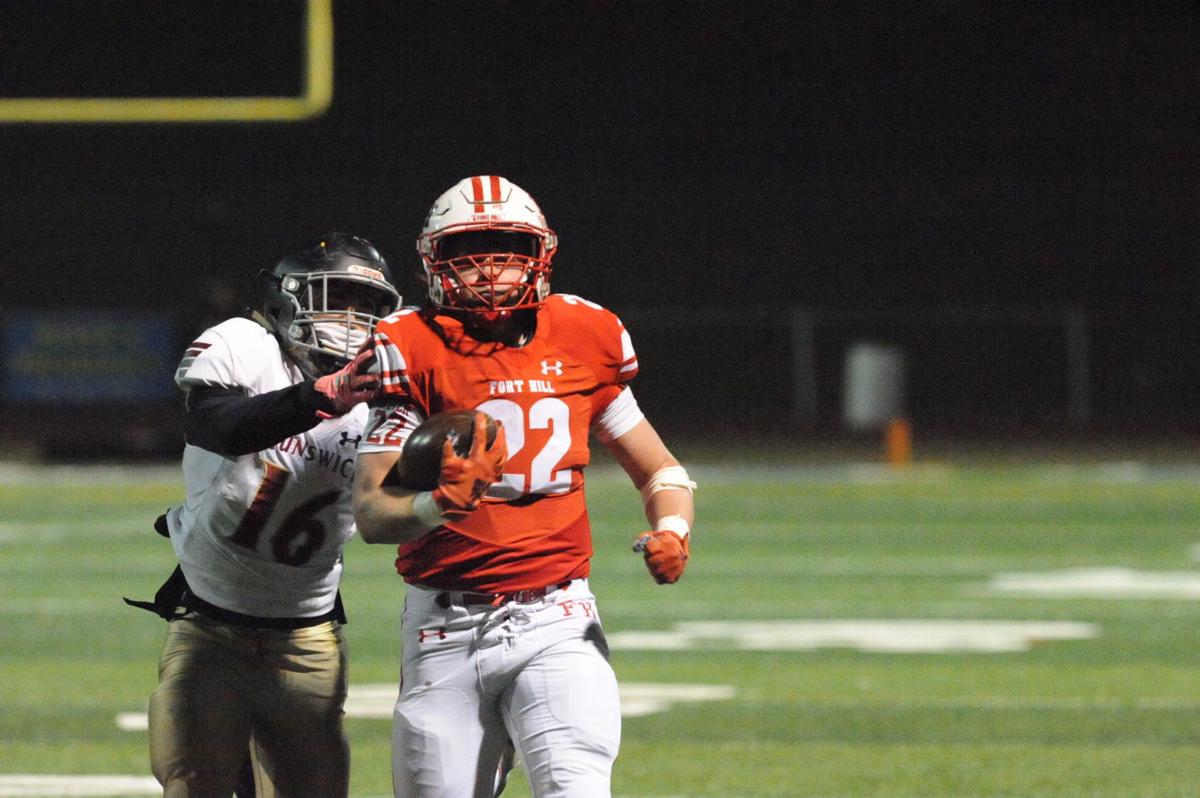 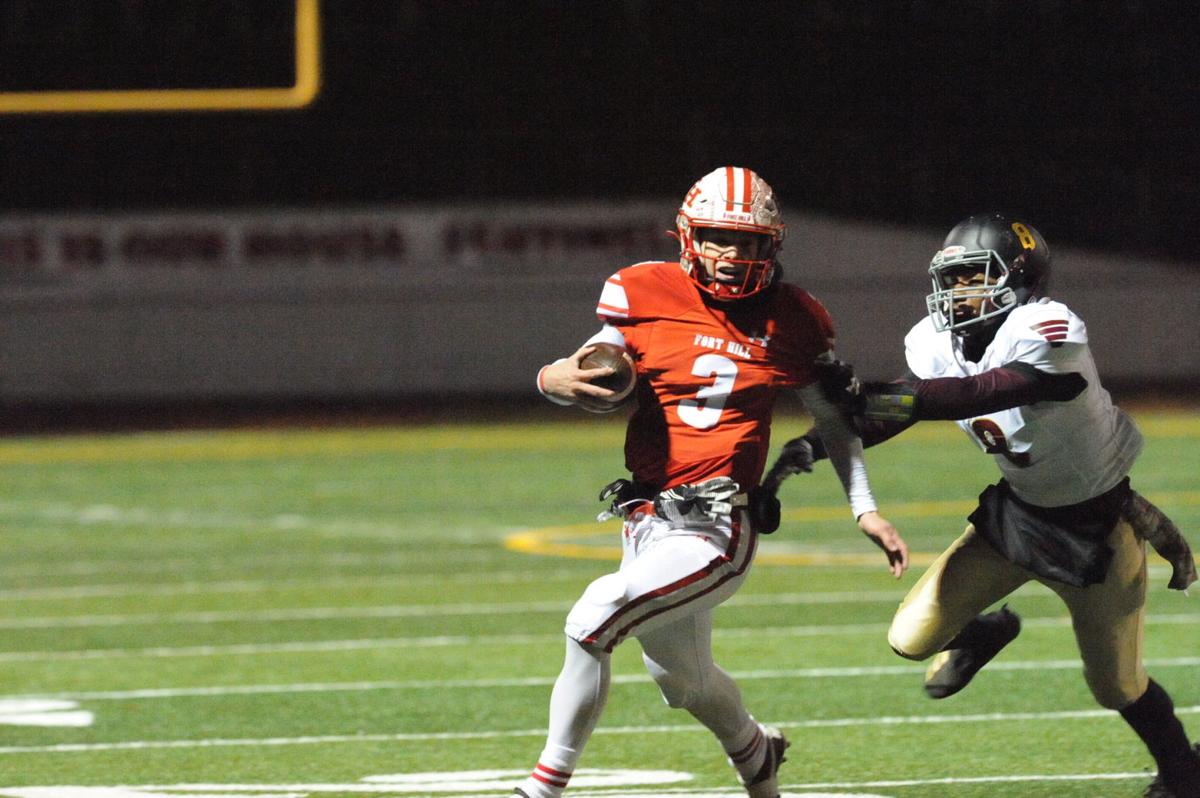 CUMBERLAND —  Playoff fever swept into Greenway Avenue Stadium Friday night as Fort Hill (9-1) bested a feisty Brunswick (4-6) team that, like a wintry chill, wouldn’t go away. Braving some stumbles and silly drive extending penalties, the Sentinels put away the Railroaders, 35-21.

The Sentinels looked like their normal dominant selves to start, receiving the opening kick and wasting no time powering down the field. Starting from its own 28 yard line, Fort Hill rumbled to midfield on the back of senior fullback Carson Snyder runs. However, the Brunswick defense tightened, forcing Fort Hill into a passing situation on its 47-yard line.

No matter, Sentinels senior quarterback Danny King dropped back to pass and was forced to scramble left before launching a 53-yard bomb to sophomore halfback Breven Stubbs, who weaved his way to the end zone.

Fort Hill capped off the 72-yard drive with a King extra point to go up 7-0 with 7:38 remaining in the first quarter.

Brunswick took the touchback and moved the ball, but stalled out around the Fort Hill 45-yard line and had to punt. The Sentinels took over at their own 13.

In no time, just two plays, a King boot left and a Snyder rumble up the gut to the Railroaders’ three-yard line, the Sentinels found themselves again in scoring position. From there, Snyder punched in the touchdown run with 3:05 left in the first quarter. The King kick extended the lead to 14-0 with 3:05 remaining in the quarter.

Brunswick opted to return the ensuing kickoff but fell short of its 20-yard line by a yard. The Railroaders managed just 17 yards before being forced to punt. The punt was a duck that gave the Sentinels ideal field position, starting the drive at their 40. King, Stubbs and Snyder followed the powerful hole-opening blocking of the offensive line down the field. A Brunswick penalty put Fort Hill on the five, and Snyder followed his blockers into the end zone.

With 8:55 left in the half, Fort Hill took a commanding 21-0 lead over Brunswick.

However, right about then is when the game took a turn. The Railroaders accepted the touchback and then tossed and optioned their way down the field. Just when it looked like they were going to stall, a defensive pass interference breathed new life into the drive. Brunswick junior quarterback Wylan Harich connected with sophomore wide receiver Michael Souders for a 10-yard touchdown.

Another miscue on the ensuing For Hill possession gave Brunswick the ball back on the 34 in scoring position. Two plays into the drive, Snyder fumbled the ball on a run and junior Railroader defensive back Bailey Himes recovered. The Fort Hill defense held and Brunswick turned the ball over on downs with four seconds left in the half.

“I’m going to say this, throughout the year we didn’t have many of those penalties,” said Fort Hill head coach Todd Appel. “I don’t know about that slant that Smitty (Anthony Smith) on the interference that extended the drive. That was a scoring drive. That block in the back when we lost one yard here late, that was kind of weird too. I don’t know how people think or whatever, but we didn’t play great. We didn’t play great, but we won.

“Brunswick is a very good team that plays top-notch competition, they only lost to Boonsboro by one. That’s a good football team and we were lucky tonight to come out on top with everything that was going on. Every time we had an opportunity we shot ourselves in the foot.”

Brunswick picked up where it left off to start the second half, going on a 17-play, 80-yard touchdown drive. Yet, it was a penalty on Fort Hill, running into the kicker on a punt, that gave Brunswick a fresh set of downs to work with. Again it was the Harich-to-Souders connection on a slant that resulted in the five-yard Railroaders touchdown.

The Fort Hill lead was cut to 7 after the two-point Brunswick attempt was good, 21-14, with 4:33 left in the third quarter.

Four plays and a cloud of dust, the Sentinels found the end zone on a 16-yard sprint left by senior Colby Santmyire. King’s kick extended the lead to 28-14 with 2:45 left in the third quarter.

Brunswick stalled and Fort Hill chewed clock, but missed a 35-yard kick. Then on the following Railroaders’ drive, offsetting penalties gave Harich a second chance on fourth down. He converted it into points, a 46-yard touchdown pass to streaking junior wide receiver Josh Pratt. The point after was good and the score was 28-21 with 5:54 left in the game.

Leaving nothing to chance, Fort Hill rode a combination of Snyder and sophomore Blake White to pay-dirt, with an 11-yard touchdown for number 11.

“We survived,” Appel said. “I told them that was the best team in the back half of the bracket by far. We saw them last week, we knew number three was special and he proved to be pretty special.”

Fort Hill (9-1) will face off against Williamsport (6-4) on Friday at 7 p.m. at Greenway Avenue Stadium.