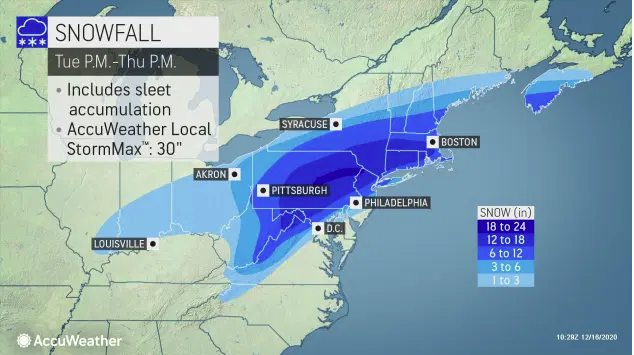 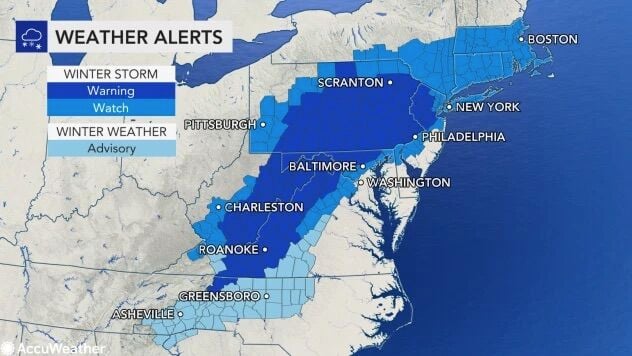 CUMBERLAND — Customers at Cannon’s Ace Hardware were emptying shelves of items like shovels and salt Tuesday morning in anticipation of a storm that could drop more than a foot of snow on the region.

“Everyone is preparing, I’ve got one snowblower left,” said Keith Beckman, owner of the Keyser, West Virginia, business.

A winter storm warning for the area is in effect until 4 a.m. Thursday. Snow is expected to end Wednesday night with accumulation up to 18 inches in some parts.

Chad Merrill, a Cumberland native who serves as the Hagerstown Town and Country Almanack meteorologist, said the heaviest snow is likely to fall in the afternoon and early evening.

“It will still be a dry powdery snow, accumulating very quickly on roadways and sidewalks,” he said.

The potential also exists for sleet to mix with the snow in the afternoon when precipitation is coming down hard, he said.

“Snow totals, we are looking at widespread amounts in Allegany County of 10 to 15 inches. I think even downtown Cumberland will get a little bit more, probably closer to 10 inches,” said Merrill. “It will be a big one.”

Higher elevations in Allegany County could see 15 inches of snow, and Garrett County even more.

Beckman said his hardware store was down to just a handful of shovels Tuesday, but he expected a new load Thursday. Salt supplies were in good shape, however.

The city of Cumberland will have 12 plow trucks working to keep roads clear throughout the duration of the storm, officials said in a Tuesday afternoon news release.

“The predicted characteristics of this storm are the most difficult conditions that city crews encounter,” said City Administrator Jeff Rhodes. “The city is well equipped and prepared to deal with the storm, but the rate of accumulation will present a significant challenge and we ask for the public’s cooperation and patience as crews deal with the storm.”

Rhodes said with the potential for 1 to 2 inches of accumulation per hour, snow could accumulate faster than it can be removed.

The Maryland State Highway Administration will use state-of-the-art technology to monitor roadway conditions and deploy resources during the storm.

“We have the tools and the people needed to respond to any weather event, large or small,” said SHA Administrator Tim Smith. “We will provide our crews and customers with the information they need to make smart decisions during winter weather, including live camera feeds, plow locations and weather conditions.”

The SHA has 387,000 tons of rock salt at 93 facilities across Maryland; 1.7 million gallons of salt brine at 77 sites; and a 2,700 equipment fleet and personnel force, including contractors.