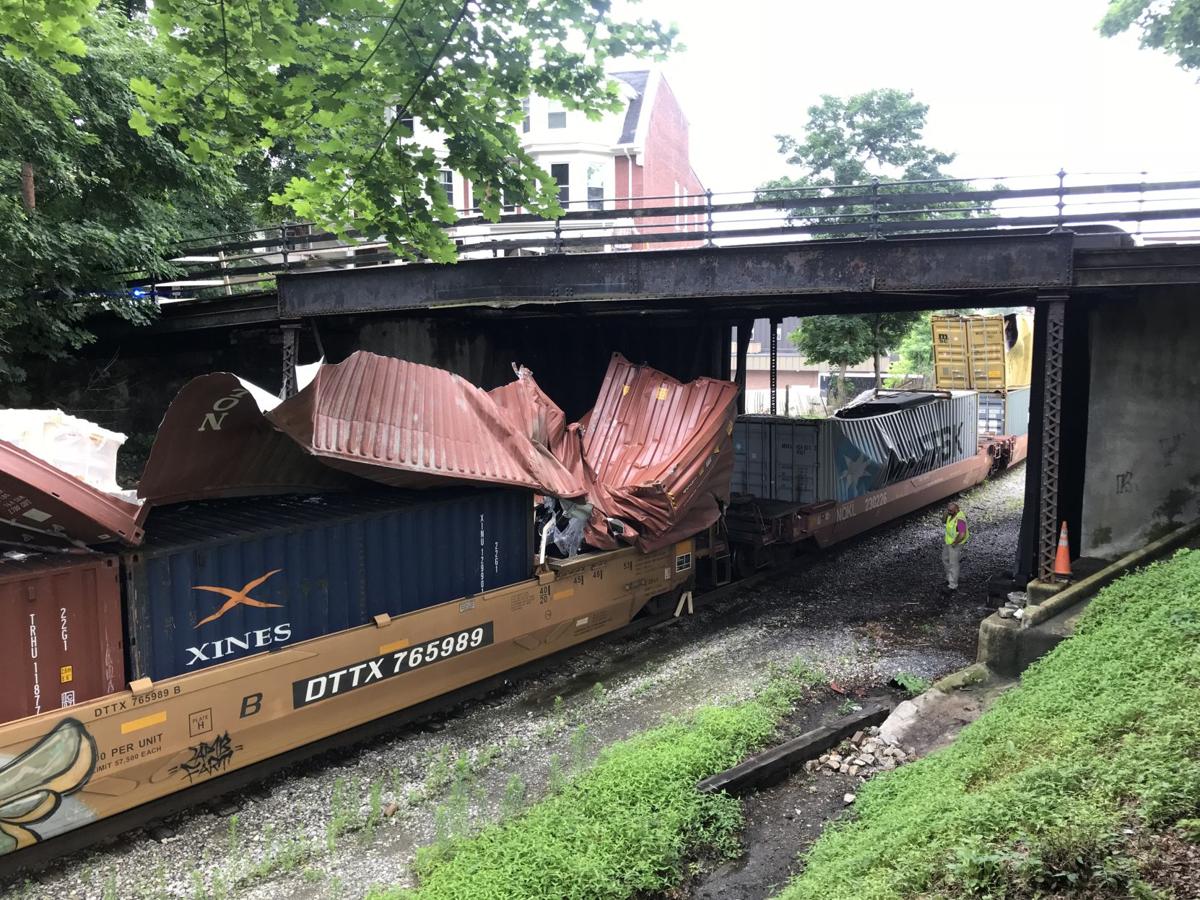 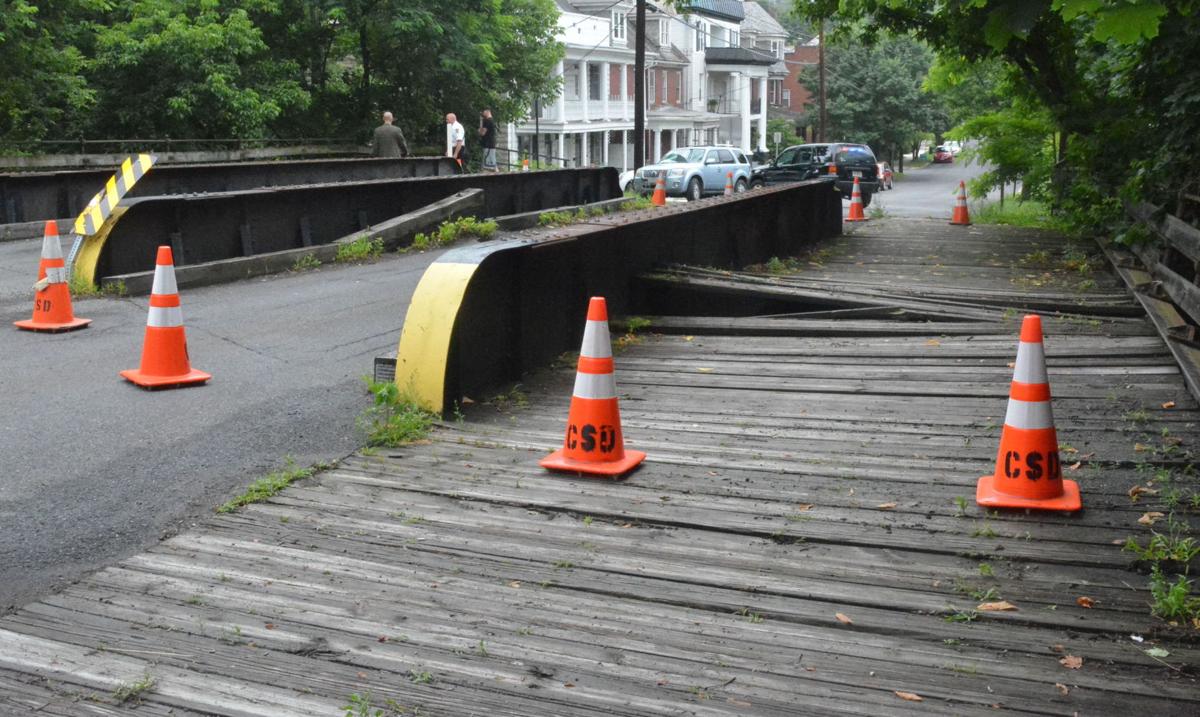 Damage to the Fayette Street railroad bridge is shown after it was struck by a CSX train passing under it on Thursday, June 21, 2018. (CTN photo by Steve Bittner.)

UPDATE: 8:08 p.m. CUMBERLAND — Engineers were assessing damage Thursday after a CSX freight train slammed into the Fayette and Washington Street bridges on the city's West Side

It was 11:21 a.m. when the Allegany County Emergency Operations center began receiving 911 calls informing that a train had hit the bridges.

Cumberland police closed the Fayette Street bridge — the only West Side bridge that was open to vehicular traffic until Thursday’s incident. The Washington Street bridge and another on Cumberland Street had previously been closed due to their deteriorating conditions.

Police urged motorists to avoid the areas of the bridges and find an alternative route through the area.

Greene and Beall streets were the only remaining street access routes to and from the West Side — in additional to Interstate 68 and National Highway into the city.

CSX personnel responded to the area to assess the incident, which included surface damage to the Fayette Street bridge.

City engineer John DiFonzo surveyed the damage as spectators gathered, Cumberland police stood by at the Fayette Street bridge and CSX personnel responded to the area.

“This is terrible ... the entire West Side is now blocked off with the exception of Greene Street," DiFonzo said.

“We have been attempting to set up a meeting with CSX to settle our issues. We have had numerous discussions but they haven’t gone far,” he said. “We may need to look for possible temporary repairs to get one of the bridges open. It’s a shame we are in this emergency state.”

In a statement posted to Facebook, Mayor Brian Grim also expressed his frustration with the situation.

"CSX has again damaged infrastructure in the city of Cumberland while simultaneously discussing with the city a resolution to the bridges," Grim said. "I have been in communication with multiple officials and everybody is cooperating to reach a solution, recognizing a pattern of CSX mistakes that have resulted in two collisions with bridges in the city in recent months, this one disrupting the final bridge that remained open.

"This error is too significant to be brushed off. I am seeking an immediate meeting with CSX on an emergency basis to hear their response and lay out immediate expectations as they relate to infrastructure, access to the neighborhood, public safety and their general disregard for the city of Cumberland and the citizens of this community."

The city recently had an engineering study completed on the Cumberland Street bridge, the results of which were to be presented to CSX, hopefully leading to bridge replacements.

“CSX has basically denied responsibility for the bridges. But in 2005 they took care of repairs to the Fayette Street bridge," DiFonzo said.

Thursday’s incident included damage to a rail car and dumping of cargo from impacted cars.

Lisa Peskin was driving to work and approaching the Fayette Street bridge when traffic came to an abrupt stop.

“The train hit the bridge and kept going slowly," she said. "We could hear the metal and it sounded like the train got stuck.

“Everybody got out of their cars. One guy yelled ‘way to go CSX.'"

Both bridges are damaged to an "unknown extent." The city's engineer is en route to the scenes.

Check back at times-news.com for more.

CUMBERLAND — The city of Cumberland has received an estimate of $4.7 million for rebuilding …

We sometimes have mixed feelings about certain developments, and the outpouring of sympathy …

CUMBERLAND — CSX Transportation has eliminated 100 jobs at its Cumberland facility, with imp…

THE LATEST: Details are few regarding bridges hit by CSX train's cargo

CUMBERLAND — If you get a little hot under the collar this weekend, you will likely have plenty of company.

Derby Day brings out Frostburg 'at its best'

FROSTBURG — Frostburg’s premiere event, the Elks Derby Day, drew a typical crowd of hundreds of spectators for its annual Fourth of July celebration.

MEYERSDALE, Pa. — An 11-mile segment of U.S. Route 219 from Meyersdale to Somerset remains on track to open this fall, a PennDot official said…