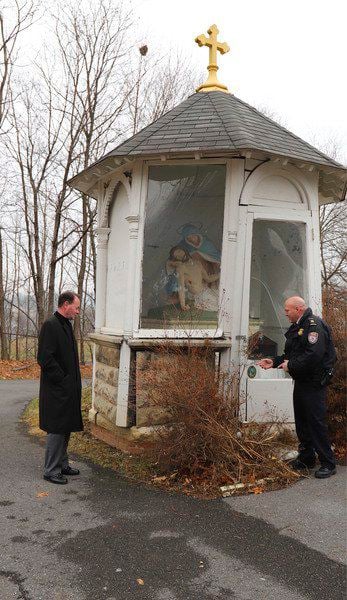 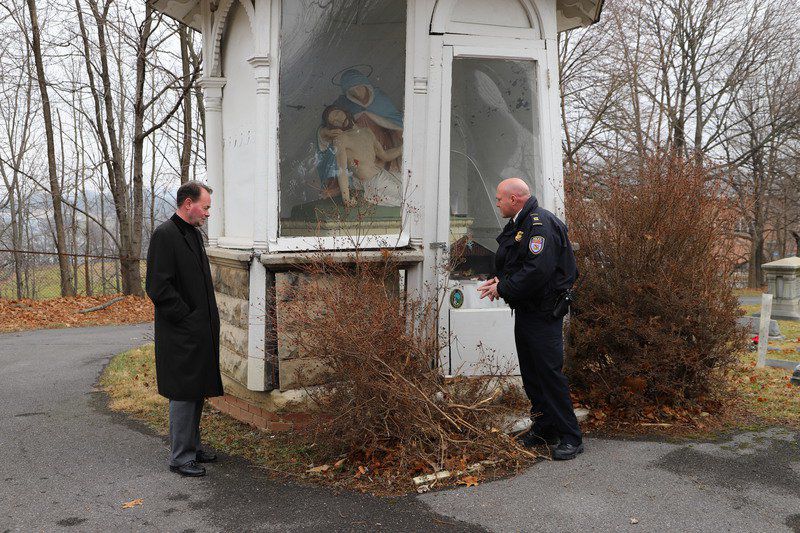 CUMBERLAND — A building at Saints Peter and Paul Cemetery was damaged recently when it was apparently struck by a vehicle, according to the Cumberland Police Department.

It was about 4 p.m. Sunday when Ed Taylor discovered the damage to the 35-foot tall building that he called “a real historic treasure.”

“We had a nativity scene inside that was in view through the glass windows at the front of the structure and I went there Sunday to remove it when I found the destruction,” said Taylor, president of the Cumberland Historic Cemetery Organization, which maintains the cemetery.

“It appears a large vehicle rammed the structure. It appears it’s ready to collapse,” Taylor said Monday. He said the vehicle ran over a 5-foot azalea bush before it struck the building consisting of concrete, stone and wood construction.

Taylor said he was in discussion with Our Lady of the Mountains Parish in an effort to get the structure “shored up” by a contractor.

The gazebo-type structure was constructed sometime between 1900 and 1905 as a gift from a parishioner. He said it was restored through an Eagle Scout project in 2000.

“It’s the most elaborate monument in the cemetery but it’s not really used for anything,” Taylor said. He said prayer services are held outside the gazebo the first Saturday of every month and cemetery tours offered to the public begin at the site.

Cumberland Police determined a maroon-color vehicle had accidentally backed into the building. Efforts continued Monday to analyze evidence gathered at the scene to identify the make and model of the involved vehicle, police said.

Anyone with information about the incident is asked to contact Cumberland Police at 301-777-1600 or Allegany and Mineral County Crime Solvers at 722-4300.