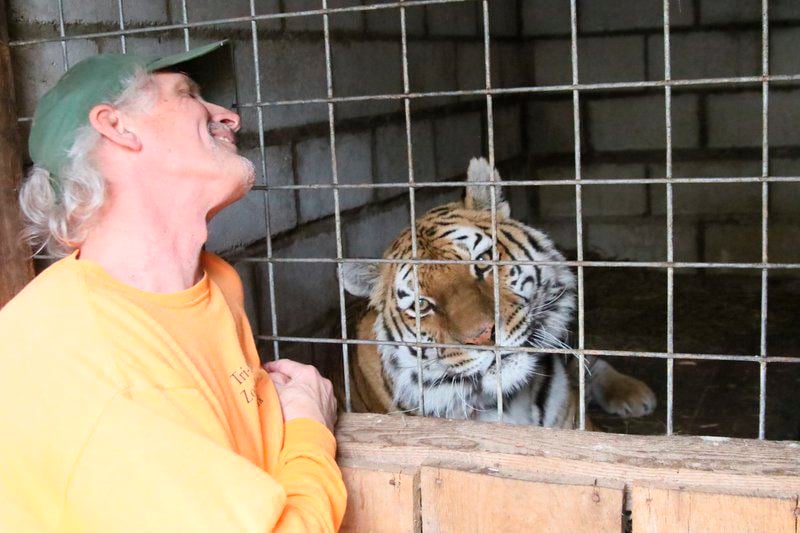 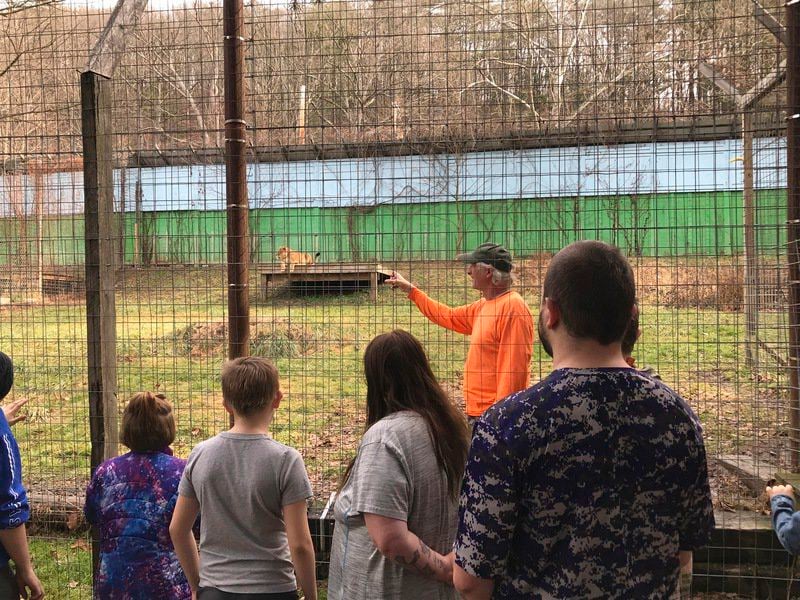 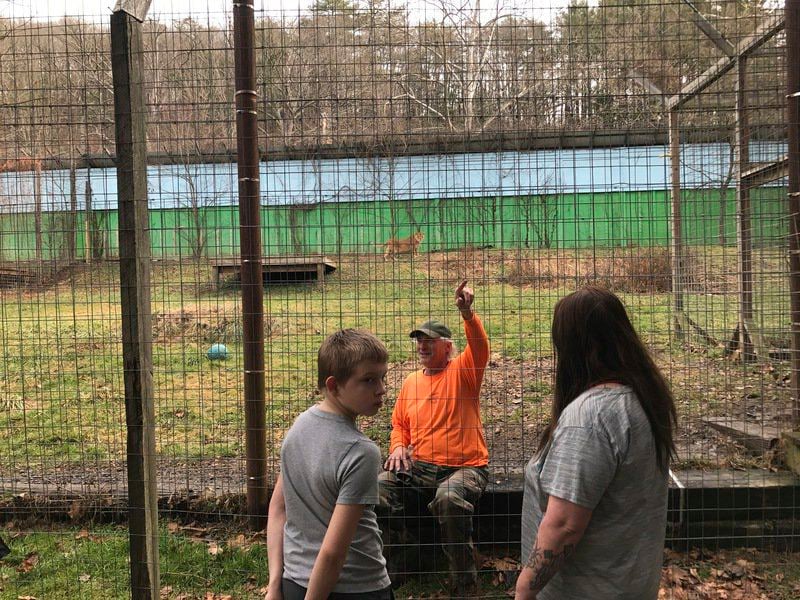 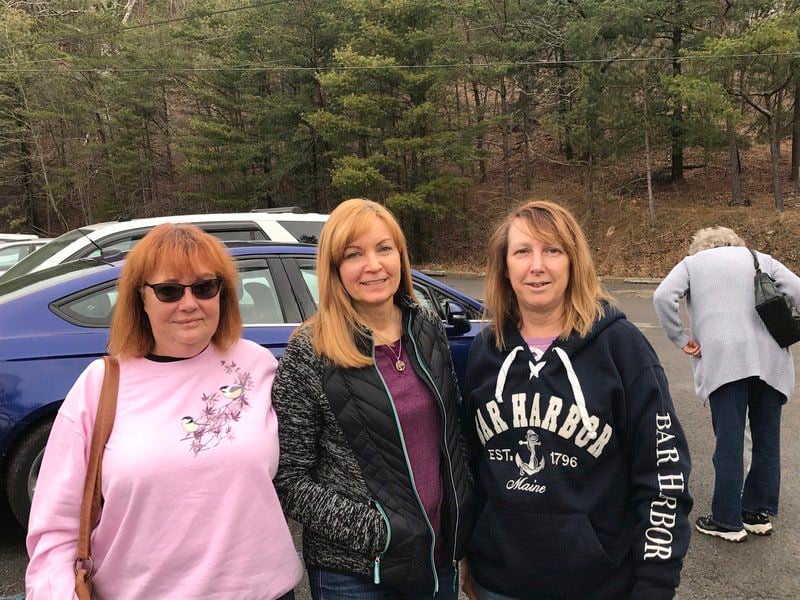 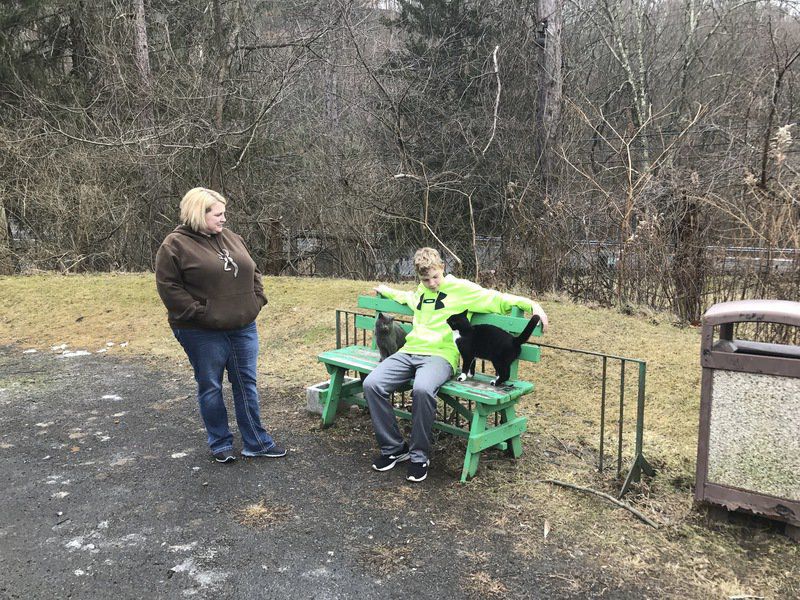 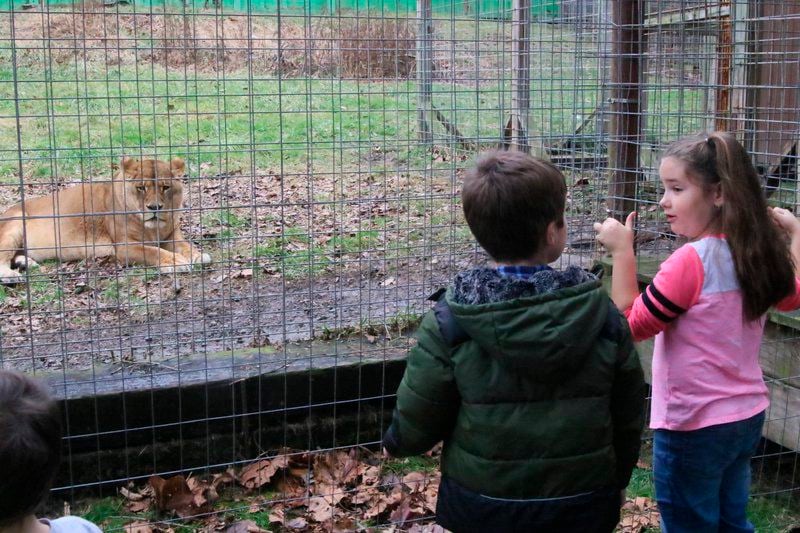 Charlette Brant, 6, of Ridgeley, W.Va., points to Peka, an 8-year-old female lion, alongside Christian Hartman, 6, of Keyser, W.Va., Saturday afternoon during an open house at the Tri-State Zoological Park on Christie Road.

Charlette Brant, 6, of Ridgeley, W.Va., points to Peka, an 8-year-old female lion, alongside Christian Hartman, 6, of Keyser, W.Va., Saturday afternoon during an open house at the Tri-State Zoological Park on Christie Road.

CUMBERLAND — Strolling through Tri-State Zoological Park Saturday, where fowl clucked and fluttered their wings and cats slunk about on curious paws in seeming harmony, members of the public flocked to say potential final goodbyes.

Following a federal judge’s decision, back in December, to make the zoo relinquish the three big cats kept there, Robert Candy, the zoo’s operator, decided to hold a farewell, free-to-attend, open house for members of the community to come and get the lay of things. The cats are Cheyenne, a 17-year-old female tiger, Mowgli, a 10-year-old male white tiger, and Peka, an 8-year-old female lion.

“Today is more to let people see them. A lot of people grew up with these animals, so it gives them a chance to see the animals they grew up with,” said Candy. “Figure (Cheyenne) she’s 17 years old; 17 years ago a lot of these people were kids. It gives them a chance to come see them, see, for sure, that nothing is wrong with these animals. It’s also really just so people possibly could say goodbye.

“We don’t think the judge is going to change her mind, but we put the appeal in, but until the appeal goes through, they could actually take them. If we win the appeal, they’ve got to bring them back — that could take a year and a half. That’s going to be hard on them. A 17-year-old tiger, they take it, it’s going to be bad enough. For me to say a year from now, bring it back, that would be hard.

“We did put a motion to stay in, if that’ll go through they’ll stay during the appeal process, but in case they can’t — originally, they were supposed to take them this Wednesday — my goal was to let people come and see them and say goodbye.”

According to Candy, PETA (People for the Ethical Treatment of Animals) said the lioness, Peka, has muscle weakness that causes her pain, a condition he said is from her not being able to nurse as a baby. Candy said the animal rights organization also said she paces, which Candy denied she does, and doesn’t square with the group’s first accusation. Candy said PETA alleged the lion is overly attached to Candy, so much so that her brain is atrophying; and she is ill-socialized, which he said isn’t true.

Lined up outside the gate before the zoo opened, Susan Pritchard, Ginny Daniels and Gail Gaughan waited, chatting, until they’d get to go in, see the animals and say goodbye.

“When my daughter was younger, we used to bring her out here,” said Pritchard. “We just think they should be left alone. They’re good here, they’re happy here. They’ve got their best interest at heart. What about these people that abuse animals and get their fingers slapped, and then Mr. Candy is trying to do something good and he gets all this hassle?”

“I think Cumberland city should help him more,” said Gaughan. “He’s all about educating, educating young people how to treat animals humanely. I don’t understand the PETA group. Why didn’t they come in and help the man if they’re so appalled by everything?”

Daniels said she was concerned for the tigers and lion, that making them leave after all these years might be traumatic.

Over on a bench surrounded by house cats looking for attention, Tiffany King and her son TJ petted the cats and fought the urge to adopt another. They try to come to the zoo at least once a year.

“It’s wrong that they’re ripping them out of their home that they’re happy in,” said Tiffany King. “I think they’re doing the wrong thing; they’re just going to traumatize the cats more. I’m a believer in animals being healthy. They’d probably bring their kids here if they lived here.”

The donkey is TJ King’s favorite animal at the zoo because, he said, it eats in a funny way.

Karen Middleton brought her grandson, Samuel Middleton, with her to see the cats off. She brings him two to tree times a year over the summer when she has him. The kindergartner bounded around on a wooden fence desperate to get a good look at the animals.

“Hopefully they don’t go,” said Karen Middleton. “I wanted to see them again, just in case. He likes to watch the snakes.”

Not to be outdone and spoken for on his own tastes, Samuel said liked the parrots, too. “They’re crazy,” he said.