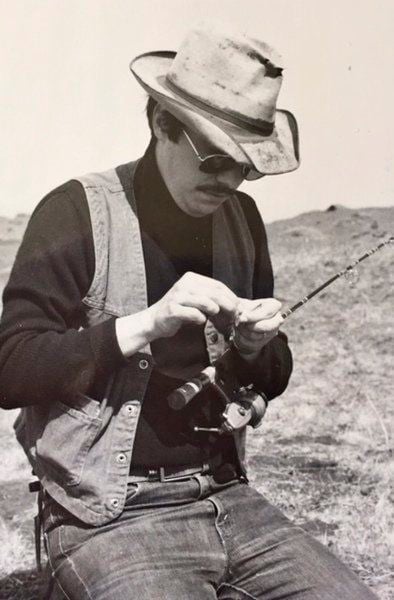 Ernest Hemingway’s son, the late Jack Hemingway, was an Idaho Fish and Game commissioner from 1971 to 1977 and is credited with having catch-and-release, fly-fishing-only regulations put in place for several Gem State trout waters, including the Little Wood River.

While Hemingway deserves that recognition, I believe that I should get at least a small part of the credit. I’d be fine with a footnote or, as is the case these days, a hyperlink.

Hemingway was a resident of Ketchum in the Sun Valley. His time on the commission overlapped my time living in Boise where I worked for the Bureau of Land Management. My good friend, Don Wright, was a conservation officer for the Idaho Fish and Game Department and was stationed in Shoshone. He and I were classmates at Utah State University and our families continued to visit for years thereafter.

It was Wright who introduced me to the Little Wood River, a stunning stream that twists and turns through sagebrush country of the Snake River Plains. It didn’t take long for me to realize that the river had a great trout population, including some very large browns, my favorite trout species.

It was on a solo trip that I met Jack Hemingway.

It was a bit of a challenging day. A chill wind and high and slightly discolored water was part of the experience, but then I’ve had good fortune fishing under such conditions and that day was a perfect example. On my metal stringer were two brown trout in the 20-inch range.

Hemingway appeared from upstream. At first, I thought I may have been hallucinating. The angler was dressed in a tweed jacket and hat and carrying a long fly rod. I wondered if he had gotten lost while angling for salmon in an eastern Canada river and somehow found his way to Idaho.

“I got a couple big browns,” I responded, lifting the stringer from the river.

“Do you kill them?” he quizzed.

The question caught me off guard. I wasn’t expecting the conversation to take a direction I wasn’t sure I understood.

Hemingway asked me what the trout had struck.

When my father and I fished the Smoke Hole in West Virginia and someone asked him that question he would respond by saying “brown streamers.” That was Dad’s description of a nightcrawler of several inches.

So, that’s how I answered Hemingway’s question, simultaneously showing him the worm holder attached to my belt.

“Not very sporting,” he said.

OK. I figured this was probably not a good time to ask to meet Mariel or Marguax or to see if I could visit Ernest’s trophy room in Ketchum.

There wasn’t much more talk and I never saw Hemingway again, even though I continued to fish the Little Wood River.

What I did see the next time the fishing regulations were published was that the Little Wood had become open only to fly fishing.

The new rules didn’t stop me from fishing there. I had caught about 2,000 trout on flies at that time of my fishing life so I just adapted, usually fishing with large muddler or spudler streamers and continuing to catch some very respectable trout.

Sometimes I would add enough weight to the line to sink the terminal tackle to the bottom of the Little Wood. Then, like a smallmouth bass fisherman who tosses out a large minnow into a deep hole in the Cacapon River in West Virginia I would just sit down and wait, not moving the muddler until I got a strike or it was time to go home, whichever came first.

Such a rig is a great way to catch big trout. The muddler dances and holds in the flow just slightly above the stream bottom as would a real sculpin. If a big trout happens along, a major strike will take place. When fishing this way, always hold onto the rod, because the trout will approach from the rear or side before grabbing the fly and turning downstream.

I doubt Mr. Hemingway would have approved of my form of fly fishing. Although it was perfectly legal, it didn’t conform to his dry-fly approach.

So, until we moved from Idaho, I continued to angle on the Little Wood, but I refused to purchase and wear a tweed jacket.

If you ever find yourself in Idaho and angling in the Little Wood River and you like the fly-fishing-only regulation … you’re welcome.

Mike Sawyers retired as outdoor editor of the Cumberland Times-News in 2018. His column now appears every other Saturday. To order his book, “Native Queen, a celebration of the hunting and fishing life,” send him a check for $15 to 16415 Lakewood Drive, Rawlings, MD 21557