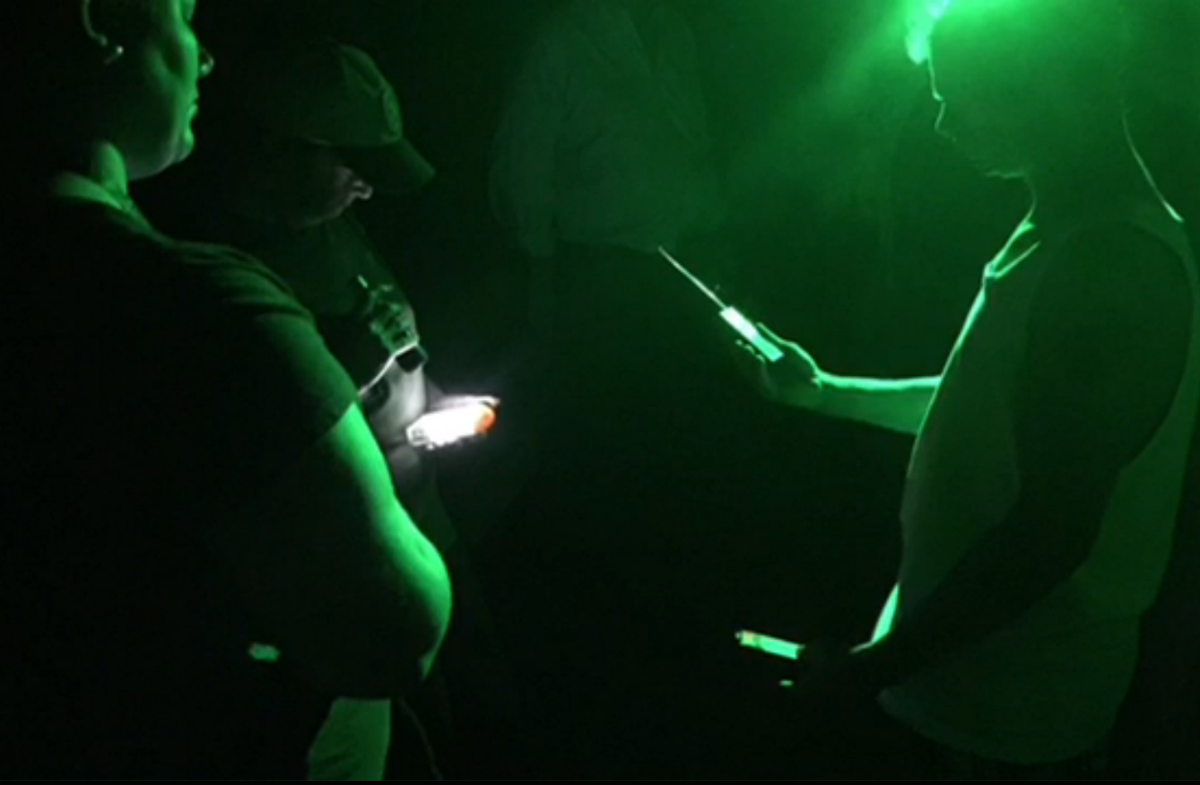 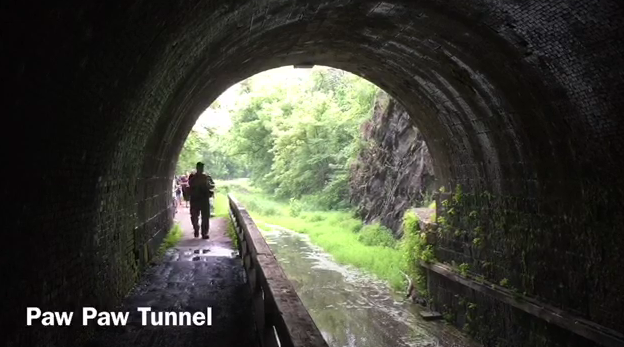 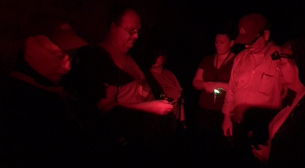 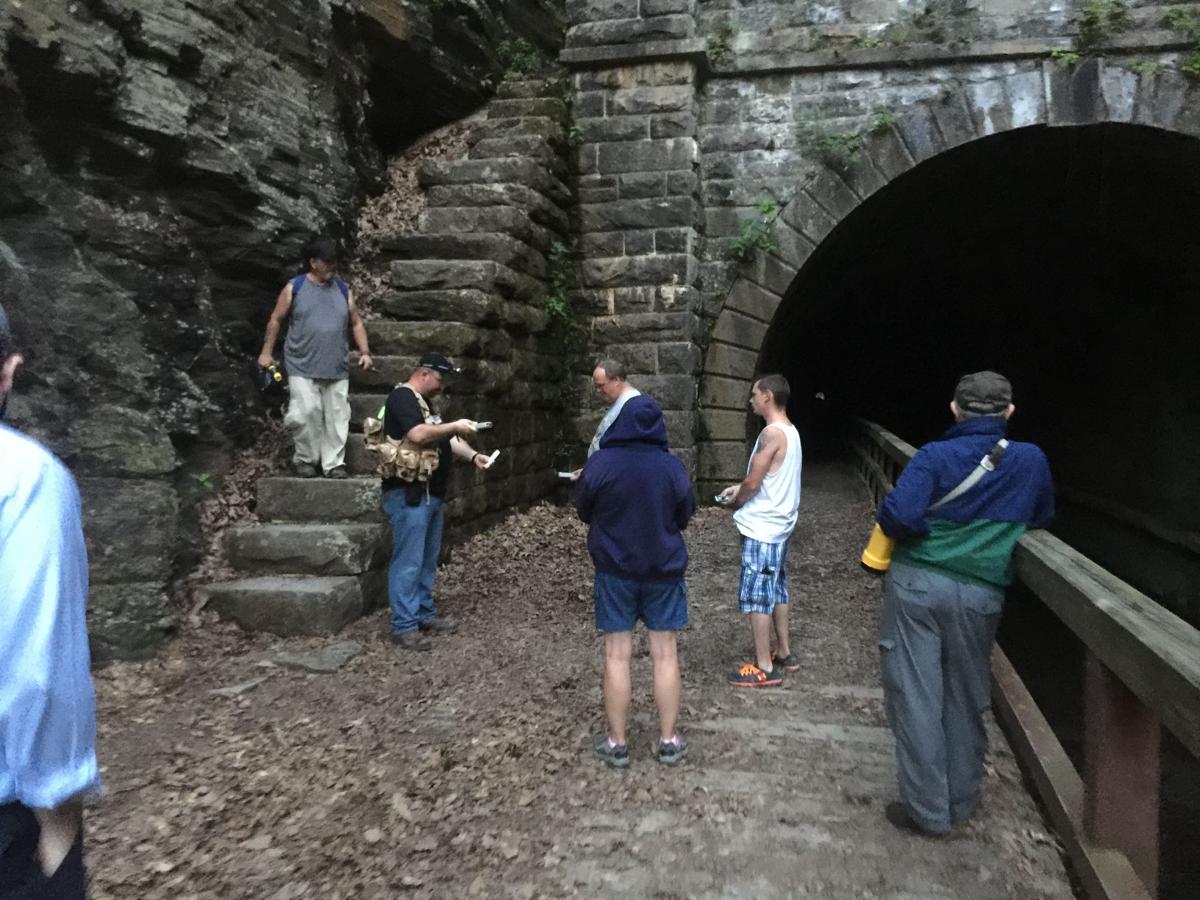 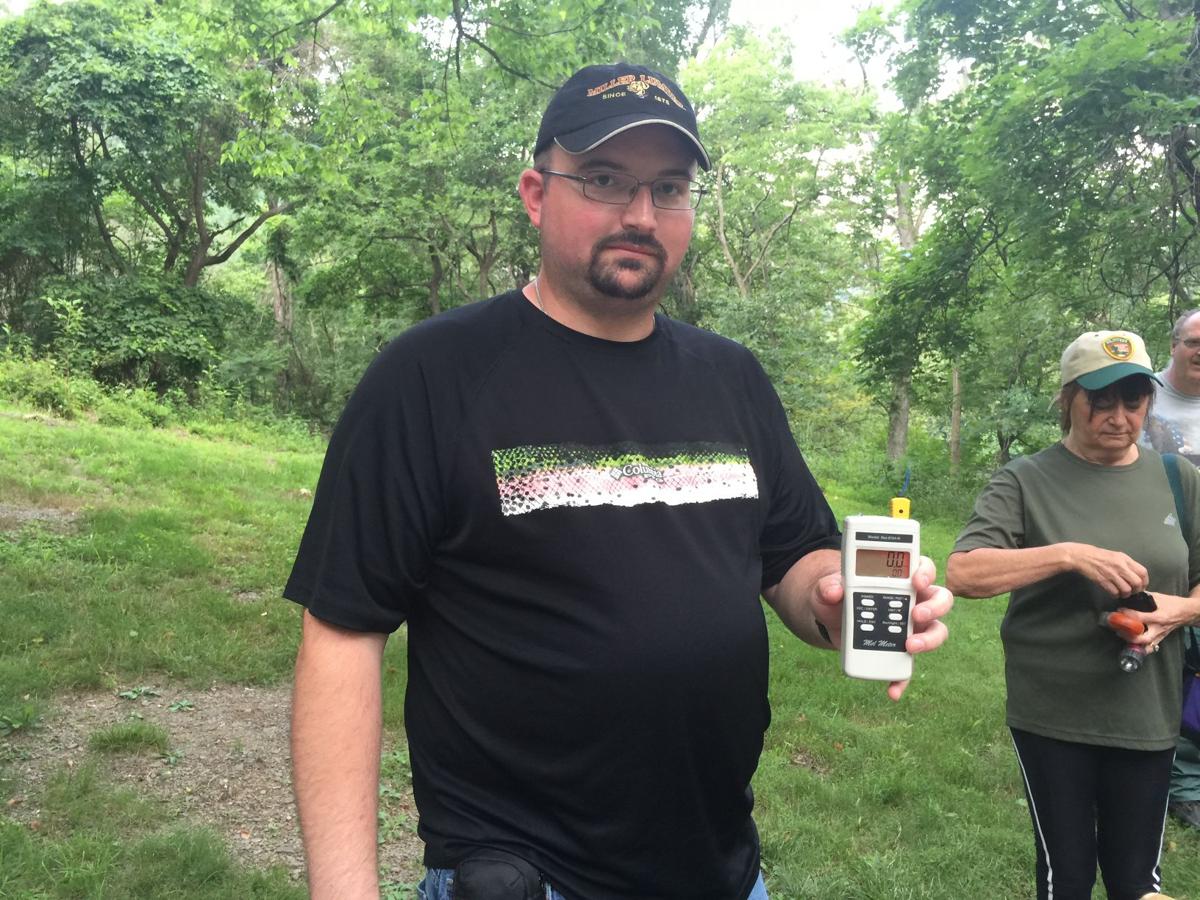 Instructor Steve Hall holds one of the meters used in his paranormal investigations class.

Instructor Steve Hall holds one of the meters used in his paranormal investigations class.

Unexplainable readings registered on the electromechanical field meter in the Paw Paw Tunnel. Dug by hand using picks, shovels and black powder explosives, the brick canal tunnel is 3,118 feet long. “What perplexed me was the K2 meter going off at the end of the tunnel,” Steve Hall said.

On a recent night, he led a dozen of his students through the tunnel to investigate the historic site.

Part of the Chesapeake and Ohio Canal National Historical Park, many folks between 1836 and 1850 died in accidents during the tunnel’s construction, labor riots and because of diseases such as cholera.

“I don’t know it if was (radio interference or a remote car door opener) or a cell phone,” Hall said of the recent meter activity. “I want to go back and investigate it further.”

ACM paranormal class instructors at that time investigated the nearly 200-year-old building that served as a temporary hospital for wounded soldiers, particularly the battle at nearby Folck’s Millduring, during the Civil War.

Hall, who  joined the ACM staff in October and is a member of the Spring Gap Paranormal Incident Response Team, was a member last summer of the now defunct Western Maryland Paranormal Society.

He said one of the most active places for the paranormal in Allegany County was the RC Frostburg 1-2-3 Cinemas.

“I thought I saw a man’s head and shoulders sitting in a seat,” Hall said.

Many folks, according to Hall, have seen figures and shadows in the theatre as well as capturing EVPs on monitoring equipment.

“Based on the research at the location, it’s the spirit of a former projectionist,” he said. “People become attached to a certain place.”

Although two members of Hall’s class remain skeptical, others say they have firsthand experience.

“Our family has had some experiences,” Jennifer Glotfelty and added said several of her family members have seen a strange apparition at their house in Friendsville.

“It is on the family farm my dad grew up on,” Glotfelty said. “My grandma saw it. All of the kids have seen it. It appears to be a male caretaker at the farm. I believe he is protective of children.”

“I would drive and I saw a man and woman walking on the road and they were in old time clothes,” she said. “When I passed them, I looked in the rearview mirror they weren’t there.”

Class member John Henry Sr., of Fort Ashby said he lives in a house that has “a lot of” paranormal activity.

While some folks don’t believe in ghosts, “I think there is an afterlife,” he said.

This was one time he got the green light

A voice behind me said, “You’re gonna get punched!”

It was the Civil War’s ‘most brilliant exploit’

In the early hours of a cold and snowy February morning (150 years ago), a small group of Co…

Age ain't nothing but a number: Either Keaton or Redmayne could win Oscar

With awards season in full swing and its dénouement, The Oscars, airing this Sunday, there h…

As two feet of snow turned Salem, Massachusetts into a virtual ghost town Tuesday, about a d…

Did they see it? Not a ghost of a chance

CUMBERLAND - "Call of Duty: Ghosts" is a video game many people trade at Cartridges Galore, …

Parents should have looked out for the trick-or-treaters

Halloween brings out a scary need to decorate

Jaren Sanders, 23, has been decorating his house for Halloween since he was a child.

SPARKS, Nev. (AP) — Police stormed a Nevada apartment after a standoff and found the bodies of an estranged Nevada husband and wife who appear…