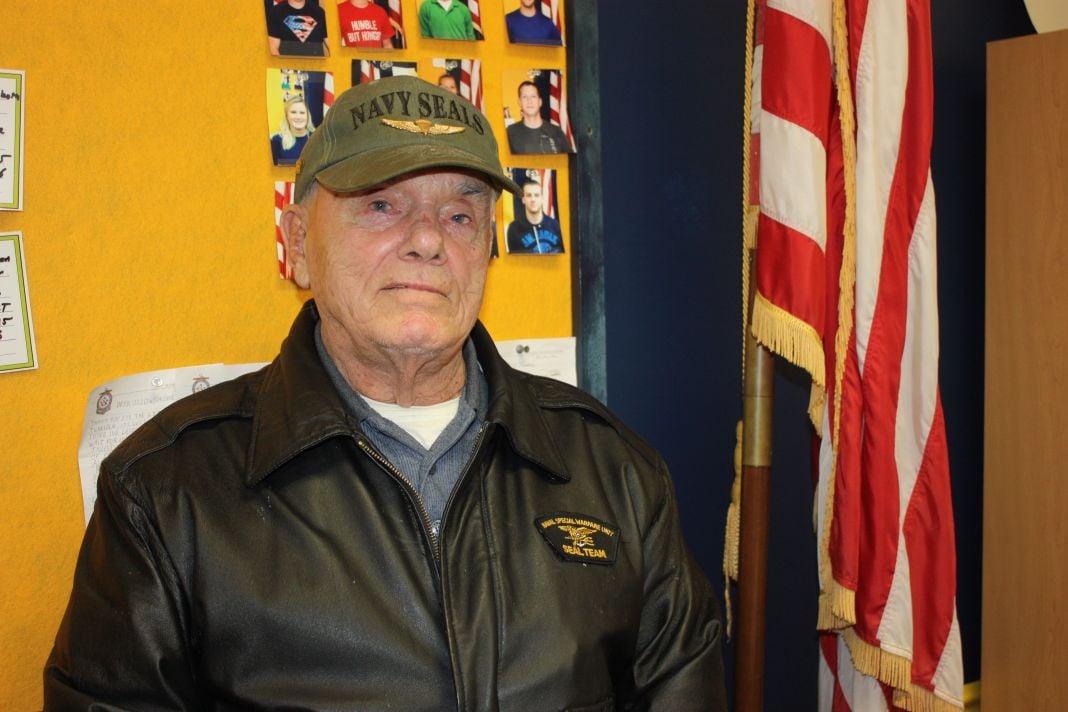 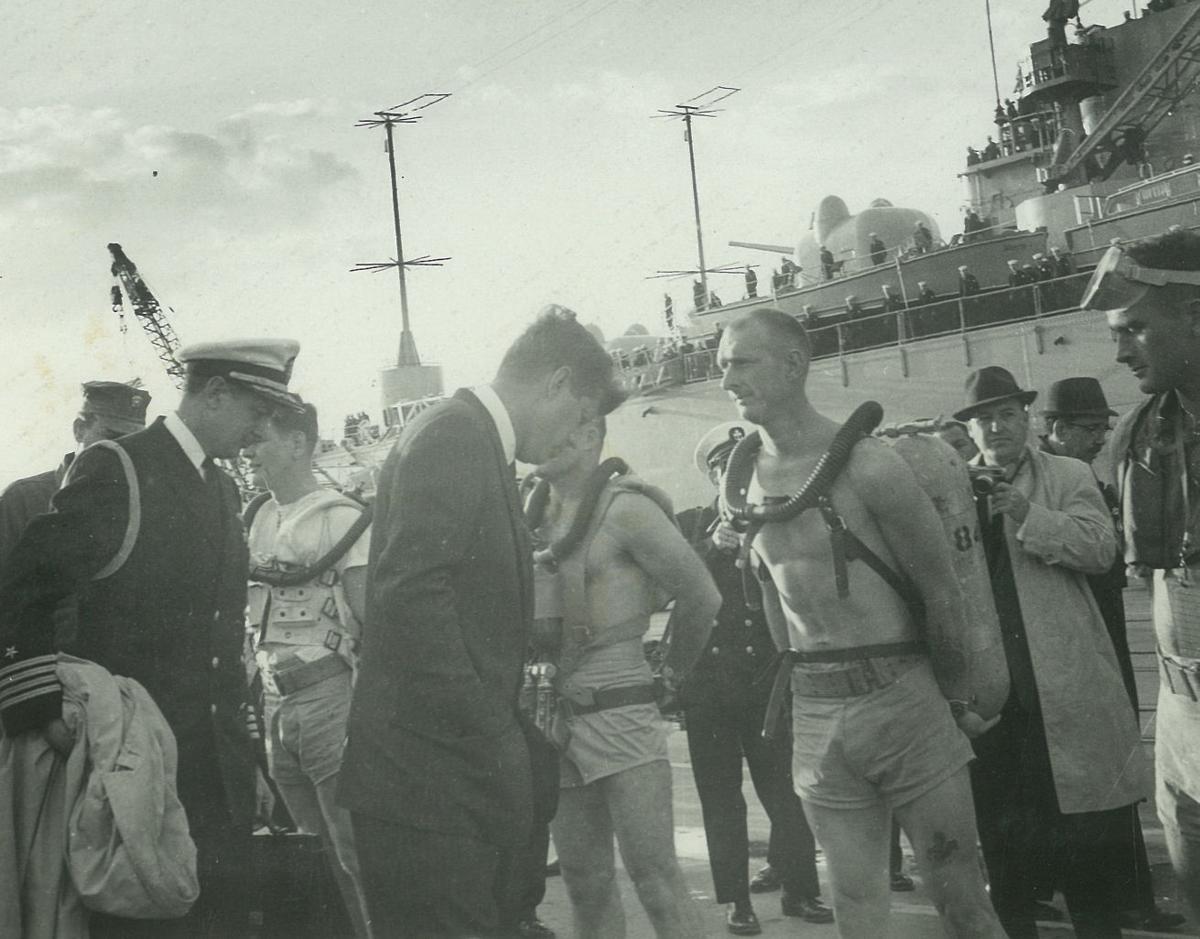 President John F. Kennedy reviews the first U.S. Navy SEAL team at the Naval Amphibious Base in Little Creek, Virginia, in 1962. Henry Beal is not pictured in this frame, but was also among the SEALs being reviewed that day.

President John F. Kennedy reviews the first U.S. Navy SEAL team at the Naval Amphibious Base in Little Creek, Virginia, in 1962. Henry Beal is not pictured in this frame, but was also among the SEALs being reviewed that day.

CUMBERLAND — The men looked at each other and wondered who would be the first to sign the clipboard. After all, President John F. Kennedy himself was asking for volunteers for a new unit.

It took a chide from a friend to make Harry Beal finally step forward and be the first to sign the paper. That friend was Harry Williams, Beals’ best friend in the U.S. Navy in 1962.

“Harry Williams said, ‘You don’t have the guts to sign that,’” said Beal. “I walked up and signed and he was standing there behind me and he signed it.”

With that signature, Beal, the son of a coal miner from Pocahontas, Pa., became the very first U.S. Navy SEAL. The SEALs (Sea, Air and Land) are an elite special forces unit of the Navy created by JFK.

Beal, 85, sat down for a Times-News interview at the military recruiting center on National Highway in LaVale. His license plate reads: 1ST SEAL.

“I had guinea pig stamped on my forehead,” joked Beal.

It was 1962 and the men were led into a classroom where they were told that President Kennedy wanted men who “could go anywhere in the world at any time and do things that were needed in a moment’s notice.”

Beal is recognized as the first official SEAL. Marcus Luttrell, the SEAL depicted in the movie “Lone Survivor,” heard about Beal and sent him a flag that says “Same blood different mud.” Luttrell was the only survivor of Operation Red Wings in Afghanistan in 2005.

Often referred to as frogmen, Beal's specialty was underwater demolition, making him uniquely qualified to be a SEAL. Beal was stationed at the Naval Amphibious Base in Little Creek, Va., in 1962 when JFK came calling.

“He (JFK) was talking to us just like I’m talking to you,” said Beal. “He said, ‘We want 50 guys in each team. SEAL Team One will be on the West Coast (Coronado, Calif.) and SEAL Team Two on the East Coast (Little Creek).’”

The thought of the East Coast group being SEAL Team Two didn’t sit well with some members of Beal's group. One of his mates spoke up to President Kennedy.

“If I may sir, the sun comes up over here first, we thought we would be SEAL Team One,” his fellow frogman said.

Kennedy replied “no,” and repeated his desire for the West Coast team to be called SEAL Team One.

Beal thought his friend had made a big mistake speaking up to the president. The friend told JFK he would “take a bullet for him,” but he was disappointed with the president.

“We thought he had just got a ticket right out of the Navy, but Kennedy just laughed it off,” said Beal.

Beal spent the next year in Vietnam during the build up to the war. In 1963, he came back to the Naval Amphibious Base in Virginia and became a SEAL instructor.

He spent 20 years in the Navy from 1948 to 1968. Beals’ stint in the service took him to South America, Europe, Southeast Asia and the Caribbean Sea, including Cuba.

The son of Clarence and Cora Beal, Harry lived two miles across the Maryland line near Meyersdale, Pa.

While in high school, Harry worked the graveyard shift for the Dairydale Milk Co., delivering milk from midnight until school began at 8 a.m.

“I didn’t sleep much in those days,” said Beal.

Although just 5 feet in height, Beal made up for it with his agility and strength.

“I could do a one-arm pull-up. It was because of delivering milk and pulling the (milk) crates off that truck,” he said.

His father wanted him to work in the mines, but he had no interest in going underground. He was just 17 when he enlisted.

“I talked my dad into signing a piece of paper to let me go in the Navy,” Harry said.

The Korean War began not long after Beal joined the Navy, but his ship was never sent to Korea.

In 1951, he married his wife Marjorie while on leave. They had three sons, Mack, Mark and Merle.

In the early ‘60s, he was sent to Little Creek to learn underwater demolition. It was there that he signed up for the SEAL team.

Another member of the team was Rudy Boesch, who, in 2000, appeared in the first season of the CBS show “Survivor.” He placed second to Richard Hatch.

Following the service, Beal did blasting for a strip mine company before landing a job with the state of Pennsylvania working on highway signs.

He reflected on his days at Little Creek as a SEAL instructor. Candidates had to endure many challenges, he said, including obstacle courses, ocean survival training, numerous (skydiving) jumps, and BUDS (Basic underwater demolition/SEAL) training.

“They start with 100 candidates. After Hell Week, half of them would be gone. You would crawl in mud with a half-pound box of TNT. It was tough,” said Beal.

He told the story of one candidate seeing a porpoise coming beside the raft while in the ocean. The candidate was unnerved by the porpoise.

“He said what is that? We told him it was a porpoise. He said ‘that’s it. I’m finished,’” said Beal.

“He quit just because of a porpoise. You never know what will stop a guy.”

Apparently not much could stop Harry Beal.

FLINTSTONE — Patricia Ann Self, 85, of Flintstone, passed away Friday, Jan. 14, 2022, at Cumberland Healthcare Center. Born June 29, 1936, in Keyser, W.Va., Miss Self was the daughter of the late Alvin Frank Self and Helen Ruth (Somerville) Self. She was also preceded in death by a brother, …