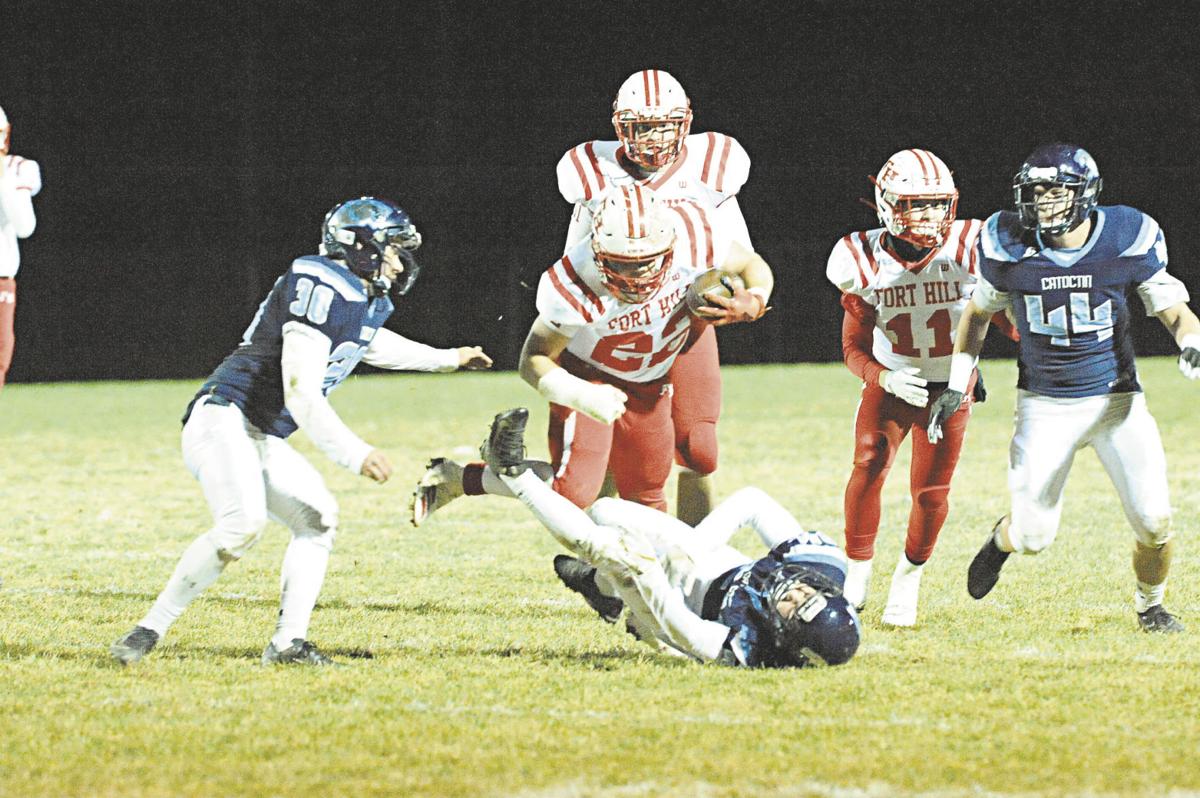 Fort Hill’s Carson Snyder (22) steamrolls a Catoctin defender during their high school Class 1A semifinal football game Friday night at Thurmont. The Cougars defeated the Sentinels, 41-0, to advance to the state title game. Also in on the play is Blake White (11). 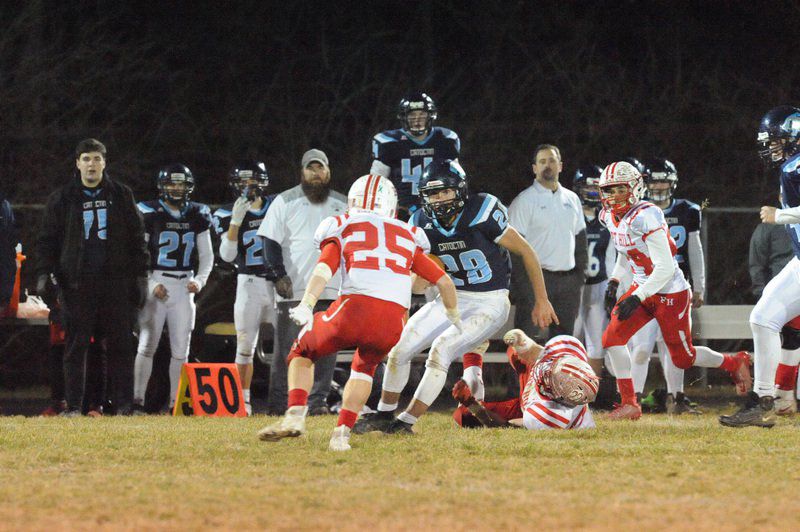 Fort Hill’s Colby Santmyire (25) tries to make a tackle on Catoctin running back Carson Sickeri (28) during their Maryland Class 1A semifinal playoff game Friday night in Thurmont. Sickeri rambled for 249 yards and three touchdowns in the Cougars’ 41-0 victory.

Fort Hill’s Carson Snyder (22) steamrolls a Catoctin defender during their high school Class 1A semifinal football game Friday night at Thurmont. The Cougars defeated the Sentinels, 41-0, to advance to the state title game. Also in on the play is Blake White (11).

Fort Hill’s Colby Santmyire (25) tries to make a tackle on Catoctin running back Carson Sickeri (28) during their Maryland Class 1A semifinal playoff game Friday night in Thurmont. Sickeri rambled for 249 yards and three touchdowns in the Cougars’ 41-0 victory.

THURMONT — Carson Sickeri did it all — on both sides of the ball — for Catoctin as he reached the end zone three times and played a part in two turnovers on the defensive side as the Cougars defeated Fort Hill, 41-0, on Friday night to punch their second trip to the state title game in school history.

The Sentinels lost three fumbles on their first four possessions and Sickeri ran for 249 yards, quarterback Ryan Orr was 6 of 11 for 126 yards and Bronson Snurr added four catches for 65 yards and a pair of scores — one rushing and one receiving.

Sickeri outgained the Sentinel offense on his own, catching one pass for 40 yards in addition to his 24 carries for less than 250 yards. Fort Hill had 127 yards, all on the ground on 37 carries.

“They’re fast and aggressive up front,” Fort Hill head coach Todd Appel said of the Catoctin defense. “We tried, after they scored after our punt that was about whatever many yards, we tried to get it back in big chunks. And we had some people open, but we just couldn’t pass block. And we fumbled it away and gave them another score. But they’re aggressive defensively. A lot is said about their offense, but they’re really good defensively as you could see tonight.

“They were well-prepared. We got out-coached, we got outplayed, but I’m still proud of our kids and our organization that have done a great, tremendous job this year.”

Fort Hill started at its own 23 and promptly went three-and-out, with an unfriendly bounce on the punt resulting in it being downed at the Sentinel 36.

From there, Catoctin got going and into the end zone three plays later with a three-yard run by Sickeri, a 21-yard pass from Orr to Travis Fields to get down to the Fort Hill eight, and then Sickeri punched it in from eight yards out. Simon Granados booted the PAT, giving the Cougars a 7-0 lead at the 8:49 mark.

Catoctin got into the end zone just over a minute later when a fumble on third-and-8 resulted in a scoop and score from Jacob McIlvaine for a touchdown. Granados booted the PAT to make it 14-0 with 7:42 showing on the first-quarter clock.

The Sentinel offense was able to get into Catoctin territory on their next drive, with Carson Snyder later picking up a 10-yard gain on a fake punt on fourth-and-6. Fort Hill went for it again four plays later on fourth-and-1 from the Catoctin 17, but the fumbled snap caused the second turnover for the Sentinels in the quarter.

Fort Hill forced a punt on Catoctin’s ensuing drive, which carried over to the second quarter, but the Sentinels had their third turnover on three straight drives with Sickeri falling on the fumble at the Catoctin 34.

Sickeri then gained 37 yards on first down and, four plays later, 10 yards on fourth-and-2 to set the Cougars up with a first-and goal from the Fort Hill 10. Sickeri gained two and seven yards on the next two plays before Snurr plunged in from a yard out. Granados’ PAT made it 21-0 with 4:57 left in the first half.

Breven Stubbs ran out of the wildcat on the Sentinels’ ensuing drive, but went three-and-out as the Cougars’ defense continued to stand tall at everything thrown at them.

Catoctin took over at its own 24-yard-line with 2:46 to play in the opening half. Orr connected with Snurr on a 24-yard catch-and-run and then the quarterback hit Sickeri on a swing pass that gained 40 yards and put the Cougars at the Fort Hill 12 with a chance to go up by four scores just before halftime, where Catoctin would receive the ball coming out of the half.

After an incompletion and a penalty that wiped out a 12-yard score by Sickeri, Orr hit Snurr for a 21-yard strike and a 28-0 lead following Granados’ PAT with 1:36 remaining before halftime.

“I thought we got better (as the season went on),” Appel said of his defense that returned zero starters from last year’s state championship team. “But tonight, we just got outmatched and we just couldn’t tackle. If my Dad was still alive, he’d say, ‘Todd, they need to tackle.’

“And it comes down to that stuff. We just didn’t tackle very well in open space and they took advantage of it. We had a little bit more team speed last year, defensively, but tonight in open space we couldn’t tackle. In the offseason, these kids need to get better and make sure that they remember this.”

The Cougars continued to ride Sickeri coming out of the second half, as he ran for nine, two and three yards before crossing the goal line on a 64-yard scamper. The PAT was wide left, making it 34-0 at 9:20 in the third.

The Sentinels went three-and-out on their next possession and, after they forced a turnover on downs, Sickeri intercepted a pass on Fort Hill’s final offensive play of the third quarter.

Catoctin’s final score came at the 8:38 mark in the fourth period on a 13-yard run by Sickeri, with Granados nailing the PAT.

“My hat goes off to Catoctin,” said Appel. “I wish them all the luck in the world next week and hopefully they win a state championship — that’d be awesome for them. And I will say this community here, with the youngness in the crowd, and the music still playing, it’s a great atmosphere for these kids to play in.

“I’m happy for the way the kids performed all year long. I hate that it ended this way.”

Fort Hill’s season concludes at 11-2. Catoctin (12-1) plays the winner of this afternoon’s game between Cambridge-South Dorchester and top-seeded Dunbar in the Class 1A state championship game next Saturday, 3:30 p.m., at Navy-Marine Corps Memorial Stadium in Annapolis.