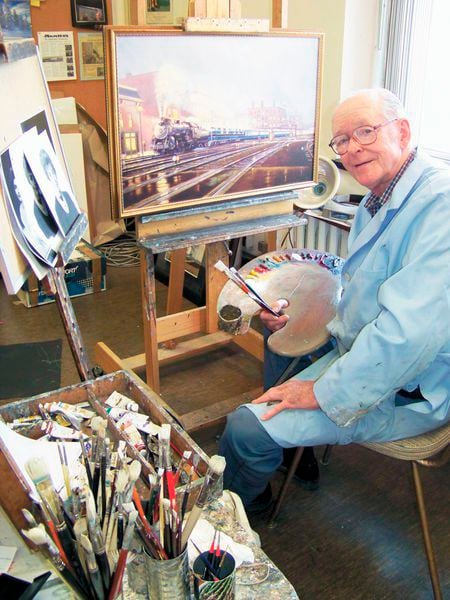 Charles Amos works on a painting in his studio in Cumberland prior to his retirement. 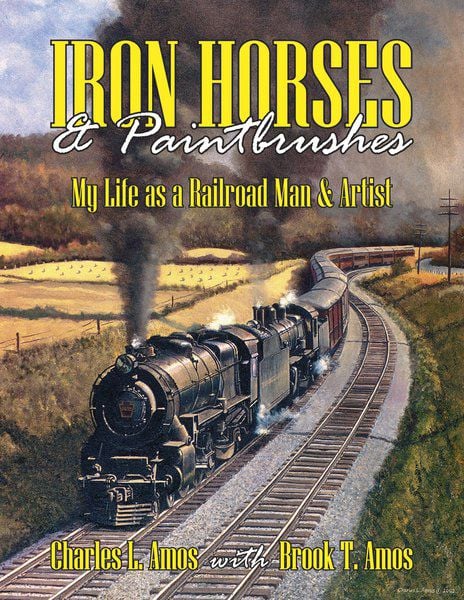 The cover of Charles Amos’ new book features one of his paintings of a steam locomotive.

Charles Amos works on a painting in his studio in Cumberland prior to his retirement.

The cover of Charles Amos’ new book features one of his paintings of a steam locomotive.

Published by The Garbely Publishing Co. and written with Brook Amos, the new book will be available by Nov. 22 through The Book Center in downtown Cumberland.

By the time Amos set down his paintbrushes in his Cumberland studio for the last time in 2015, he had already left a legacy behind him. After retiring from a 30-year railroad career, Amos spent another 35 years brushing the memories of his railroad career onto canvas. In the process, he became one of the most respected and revered American artists in the genre, painting his way to numerous accolades in both railroad and art publications.

Now 89 years old, Amos has put his life into print.

His book covers his life growing up in Lutherville during the Great Depression and World War II and his fascination with the trains of the Pennsylvania and Baltimore & Ohio railroads that rolled near his childhood home. His formal artistic training under famed Baltimore impressionist Marjorie Martinet and his teenage years spent on the local fire company give way to his railroad career in Cumberland, Hagerstown, Hanover and Baltimore, working his way up from a locomotive fireman to upper management at the Western Maryland Railway between the 1950s through the 1970s.

He continued his railroad career with jobs at the Federal Railroad Administration, Department of Transportation and Association of American Railroads before retiring to pursue a second career in art.

Amos returned to Cumberland in the 1980s, setting up a modest studio downtown. For the next 30 years, lucrative commissions from railroads, companies and individuals across the country supplied his income, while his directorships with both the Allegany County Chamber of Commerce and the Western Maryland Scenic Railroad kept him firmly entrenched in local society. More than 30 of his original artworks are reproduced throughout the pages of the book.

Amos’ contributions to American railroading, and to Cumberland specifically, led CSX Transportation to rename its Cumberland locomotive shop in his honor. John W. Snow, the former CEO of CSX and retired U.S. secretary of the treasury, has called his book “a stirring, moving, and well-told story of a man who combined his fascination with trains with rare artistic gifts, a man who found his true calling as an artist.”

Now living in Swanton, Amos will return to Cumberland in conjunction with the monthly Discover Downtown Cumberland event on Dec. 14 for a book signing at The Book Center from 4 to 6 p.m.

For details about purchasing the book and attending the signing event, contact Lee Schwartz at 301-722-2284 or lgschwartz@hotmail.com.