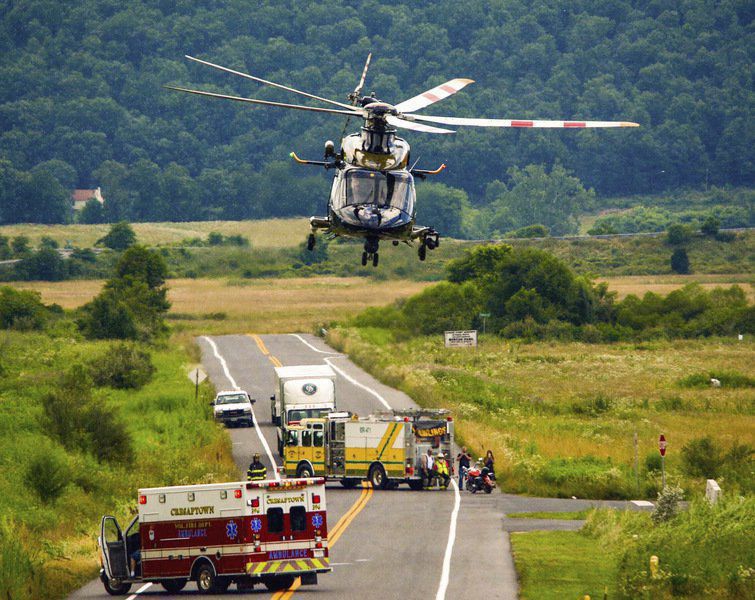 Trooper 5, a Maryland State Police medevac helicopter, gains altitude as it leaves the scene of a vehicle accident near U.S. Route 220 at Rawlings on Monday, July 2, 2018. State police said that staffing shortages have resulted in reduced availability for the helicopter. 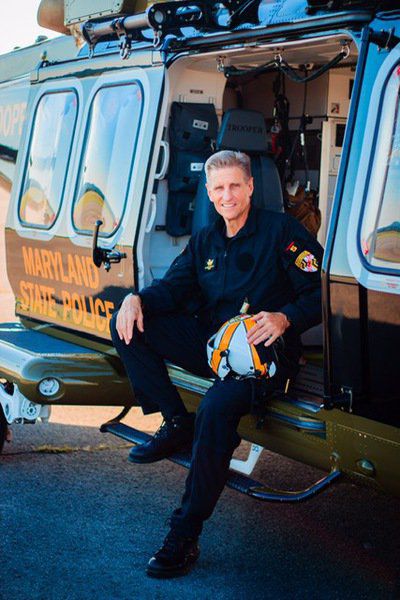 Rick Bartlett, Maryland State Police Trooper 5 pilot and president of the American Federation of State, County and Municipal Employees Local 3675, sits at the door of the helicopter that is based at the Greater Cumberland Regional Airport.

Trooper 5, a Maryland State Police medevac helicopter, gains altitude as it leaves the scene of a vehicle accident near U.S. Route 220 at Rawlings on Monday, July 2, 2018. State police said that staffing shortages have resulted in reduced availability for the helicopter.

Rick Bartlett, Maryland State Police Trooper 5 pilot and president of the American Federation of State, County and Municipal Employees Local 3675, sits at the door of the helicopter that is based at the Greater Cumberland Regional Airport.

CUMBERLAND — An ongoing shortage of pilots and a temporary electrical issue for the last week has reduced the availability of the Maryland State Police medevac helicopter based at the Greater Cumberland Regional Airport.

It was last August when state police announced that the Trooper 5 helicopter’s hours of service availability would be altered to 7 p.m. to 7 a.m., as the result of the shortage of pilots and paramedics.

But Trooper 5 has not been available in recent days — such as Nov. 29 for an injured hiker in Green Ridge State Forest and a 58-vehicle pileup Dec. 1 on Interstate 68 at Big Savage Mountain at Finzel in Garrett County.

Frederick-based Trooper 3 helicopter answered the call for the injured hunter, performing a hoist rescue before the patient was flown to the Western Maryland Regional Medical Center.

“This is another example of our ability to deploy resources where needed, especially in the Aviation Command,” state police spokesman Greg Shipley said. “When EMS called for helicopter assistance in Green Ridge, a fully-staffed and equipped Maryland State Police helicopter with hoist capabilities responded and conducted the rescue.”

“They work daily to schedule personnel and equipment in a way that will most effectively provide public services to the citizens of Maryland,” Shipley said.

In the 58-vehicle pileup on Interstate 68 at Finzel last Sunday, 10 people were injured but none suffered injuries that were assessed at the scene as life-threatening.

Although weather conditions at the time of the pileup would have prevented flight to the Finzel area, Trooper 5 would have been available to fly any injured victims from Cumberland to out-of-area facilities for a higher level of trauma care.

The helicopter was out of service, however, due to an electrical issue that was discovered Nov. 30.

“There is an electrical problem with ability to provide heat to the airspeed indicator,” Rick Bartlett, a veteran Maryland State Police pilot at the Cumberland section, who is also the president of Local 3675 of the American Federation of State, County and Municipal Employees, said. The union represents Maryland State Police civilian employees that includes the pilots in the medevac fleet.

“In winter time, we are not allowed to fly in less than 39 degrees,” Bartlett said about medevac helicopter weather restrictions.

Last Friday, Bartlett flew Trooper 5 to Garrett County Airport, picking up a patient that was flown to a Morgantown, West Virginia, hospital.

It was after that mission and upon return to Cumberland that the mechanical issue arose.

Early last week, the helicopter was flown to a maintenance facility at Martin State Airport in Baltimore. As of Friday, the helicopter had not been returned to service, although it was expected to be back Saturday at the earliest.

Shipley detailed the process for dispatching of medevac helicopters.

“When a ground provider places a call for a helicopter, a duty officer at the operational control center known as SYSCOM makes a determination regarding the most appropriate aircraft to respond,” he said.

Shipley said protocols are in place to allow response of other aircraft when state police helicopters cannot respond.

The Allegany County Department of Emergency Services said there have been “several instances over the past few months” when the Trooper 5 helicopter was not available, according to Lt. Todd Bowman, the agency’s spokesman.

“In these situations, ground units transported to the closest, most appropriate facility or the next closest available MSP aircraft was dispatched,” Bowman said.

Currently, there are five pilots and seven trooper/medics at the Cumberland airport hangar.

“Fortunately, we hired three pilots in November and one just today, all of whom will be assisted to the Cumberland section,” Shipley said Wednesday via email.

The new hires are undergoing pilot training and “will be ready for their assignment to the Cumberland section in March 2020,” he said.

“New hires often linger for weeks or months without an airframe to train in,” he said. “They do spend a couple weeks in ‘ground training,’ as well as our new flight simulator at MSP Aviation headquarters at Martin State Airport.

Bartlett said the helicopter can’t be in service without two qualified pilots and two trooper/medics on each 12-hour shift.

Bartlett said there are 52 civilian pilots in the aviation division, but there is need for 65 to 70 pilots.

“We lost 18 pilots who went out the door this year,” Bartlett said.

In 2013, Maryland State Police purchased 10 AW-139 helicopters to be based at seven locations across the state.

“In Cumberland, there is a mechanic on duty at the Cumberland section,” he said. “There are some things we can work on but we are very limited in how complicated of a malfunction our mechanic can address. The mechanic’s work is primarily preventative.”

Any repairs required by the helicopter manufacturer, AgustaWestland, are made at its Philadelphia airport facility.

“Maryland State Police has a real challenge here with the shortage of pilots and mechanics. It’s really not their fault,” Bartlett said.

“We currently have five vacancies of the 30 aviation maintenance technicians we are allotted, but 30 is barely enough to service the 10 helicopters and at least two of those vacancies are key supervisory positions that require considerably more experience and training than your basic airframe and powerplant mechanic,” Bartlett said.

He said most critical is the lack of a chief quality assurance inspector, the one individual in maintenance who certifies each aircraft as airworthy following repair.

“Without enough mechanics to conduct routine scheduled inspections and preventative maintenance, as well as unplanned malfunctions and repairs, we can’t keep seven flying aircraft in service at our seven bases, even with three additional spares.”

BARTON - June Kiddy, 89 of German Street, Barton, passed away Sunday, Jan. 26, 2020, at Egle Nursing and Rehab Center, Lonaconing. Born June 26, 1930, in Barton, she was the daughter of the late William and Elizabeth Schramm. She was also preceded in death by her husband Harold Kiddy; brothe…