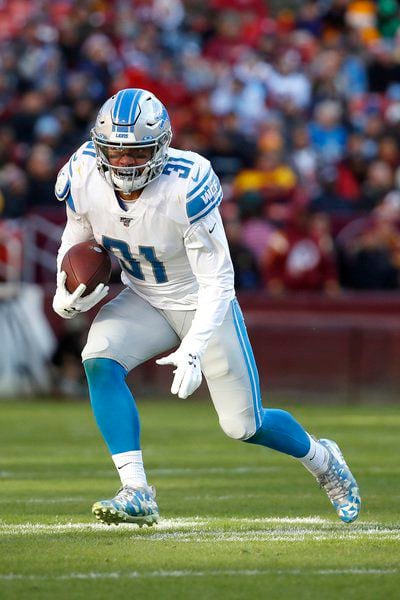 Detroit Lions running back Ty Johnson runs against the Washington Redskins during the first half Sunday in Landover. 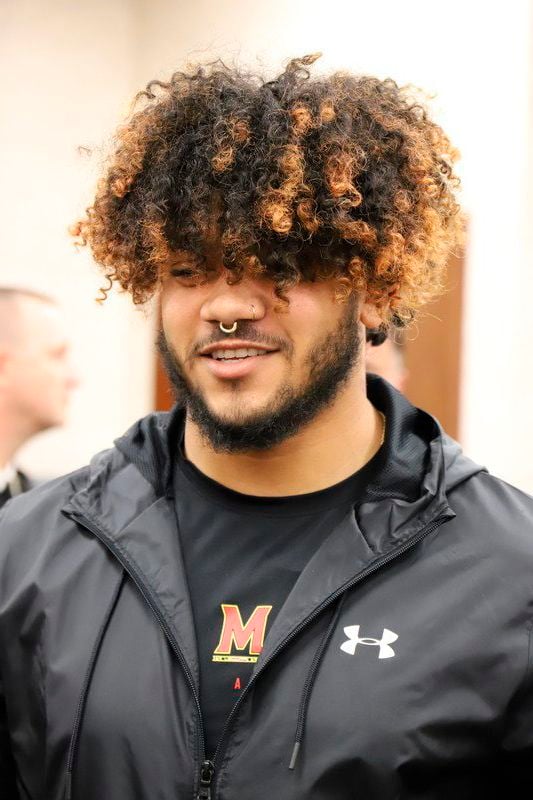 Detroit Lions running back Ty Johnson runs against the Washington Redskins during the first half Sunday in Landover.

CUMBERLAND — For a record fourth consecutive year, Cumberland’s Ty Johnson will receive the George W. Stevenson/Nicholas A. Perlozzo Memorial Award to be given to him by the Dapper Dan Club of Allegany County during the 72nd Annual Dapper Dan Awards Banquet on Sunday, Feb. 23, at the Ali Ghan Shrine Club beginning at 4 p.m.

The Dapper Dan’s top award has been presented since 1952 to the person who brings the most national recognition to the Allegany County area through athletics and once again Johnson did just that.

Beginning in April with the 2019 NFL Draft, Johnson was selected in the sixth round with the 186th overall pick by the Detriot Lions as a running back from the University of Maryland.

Johnson, a two-time Area Player of the Year while at Fort Hill, was one of eight out of nine players drafted by the Lions to make the team.

He finished his rookie season as the team’s third leading rusher behind Kerryon Johnson (403) and Bo Scarbrough (377), gaining 273 yards on 63 attempts for 4.3 yards per rush average. He also caught 24 passes for 109 yards for 4.5 yards per reception to be the team’s sixth-leading receiver and he returned three kicks for 58 yards with a long of 25 to average 19.3 per return.

In his first NFL regular season game, a 27-all tie at Arizona, he had one carry for six yards. In the Lions’ season finale against Green Bay, he gained 65 yards on only three attempts with 51 coming on two plays late in the first half.

With the Lions leading 14-3 and starting from their own 25 with 20 seconds remaining before halftime, Johnson broke free off right tackle for a 40-yard run before going out of bounds at the Packers’ 35. Following an incompletion, Johnson gained 11 yards up the middle to the 24 that set up Matt Prater’s 42-yard field goal and a 17-3 lead in an eventual 23-20 loss that closed the Lions’ season at 3-12-1.

Of Detroit’s 12 losses, the margin in seven of those was by seven points or less.

Johnson’s best overall game came in the Lions’ sixth on Oct. 20 in a 42-30 home loss to the Minnesota Vikings. He finished with 29 yards rushing on 10 attempts and caught four passes for 28 yards. Up to that point, he only had 13 rushes for 54 yards and four receptions for seven yards through the first five games.

After his performance against the Vikings, he became more involved with the offense. For the rest of the season, he had at least two rushes per game until season’s end and had at least one reception until the last two games.

“I want to make a special presentation award to Ty. It is not because of your position in the NFL, but it doesn’t hurt any,” said Robertson. “But, it’s because of your relationships with kids in this area. You are at a time when kids look up to you and can learn from you and hopefully follow in your footsteps so they don’t take the wrong path.”

Robertson said the trophy for being a role model and mentor has only been given out twice in the last 10 years.

“This is presented to Ty Johnson in recognition of your commitment and dedication to mentoring students in Allegany County by following your dream,” he said. “A dream of continuing to help local Allegany County students by helping them take the right path and seek out their own dream. In a time where family structure has drastically changed over the years, there is a tremendous need for people, for kids of all walks of life, to look up and see that life is too precious to waste. Ty, I believe I can speak for the majority of Allegany County that we are all proud of you.”

Johnson said he appreciated the honor.

“I enjoy coming back home,” he said. “It’s good to see everyone. ... I thank the area for supporting me.”

Johnson graduated from the University of Maryland in December 2018, leaving as one of only four Terrapins to ever account for 4,000 all-purpose career yards.

This year’s banquet will not be a sit down dinner. For the sake of time, light appetizers will be available starting at 3 p.m. with the awards ceremony promptly starting at 4.

Jeff Landes is the sports editor for the Cumberland Times-News. Staff writer Greg Larry contributed to this story.