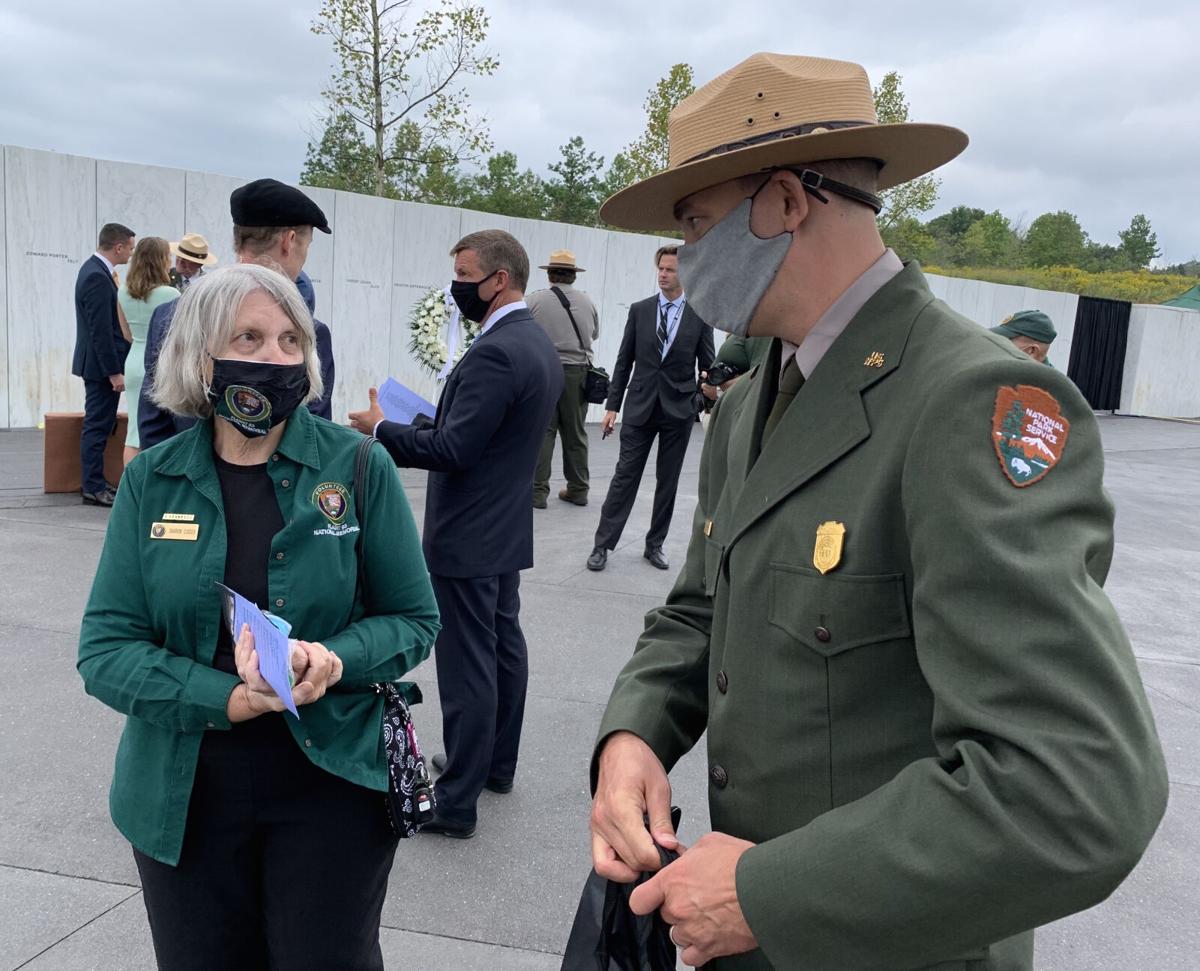 Flight 93 ambassador Sharon Custer, left, talks with Adam Shaffer, chief of interpretation and education at the Flight 93 National Memorial, near the Wall of Names following a 9/11 anniversary ceremony Friday, Sept. 11, 2020. 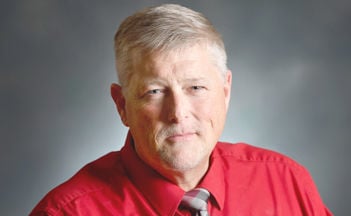 Flight 93 ambassador Sharon Custer, left, talks with Adam Shaffer, chief of interpretation and education at the Flight 93 National Memorial, near the Wall of Names following a 9/11 anniversary ceremony Friday, Sept. 11, 2020.

Before there was a visitors center full of displays and artifacts near the Flight 93 crash site.

Before there was a Wall of Names or a Tower of Voices.

Before there was a permanent memorial operated by the National Park Service, there were ambassadors – members of the surrounding community who volunteered their time as the stewards of the remarkable story of 40 heroes whose actions saved thousands of people they had never met.

Sharon Custer, of Central City, has been ambassador since 2005 – greeting visitors to the site and helping them understand what happened there on Sept. 11, 2001 – when the passengers and crew of United Flight 93 fought back on a day of terrorism that saw hijacked planes flown into the twin towers of the World Trade Center in New York City and the Pentagon near Washington, D.C.

The actions of the 40 individuals on that fourth plane caused United 93 to crash into a former strip mine near Shanksville – killing everyone on board but likely saving thousands of lives in the nation's capital.

"It's very gratifying to come out here and talk to people," Custer said Friday following the 9/11 anniversary service at the Flight 93 National Memorial, where President Donald Trump saluted the ambassadors during his remarks.

"For the people who volunteer here or work here, it's 365 days a year of honoring the heroes of Flight 93," said Sharon Perry, of Duncansville, who said she was approached about volunteering five years ago after helping with a tree planting at the memorial site.

"Somebody had to tell the story," Perry said. "The people who live locally know so much."

Adam Shaffer serves as chief of interpretation and education for the National Park Service at the Flight 93 National Memorial.

He was 19 years old when Flight 93 crashed near the Shanksville community where he grew up.

Shaffer had come up through the Shanksville Fire Department, where his dad, Terry Shaffer, was the chief and later a key figure in the early efforts to preserve the crash site. His mom, Kathie, is also deeply involved in the community and the Flight 93 site.

"This is an important day for me, and for our family, every year," Adam Shaffer said.

He recalled doing his high school senior project about the Gettysburg battlefield, and then interning there as a budding park ranger.

"From that experience, I knew that this was what I wanted to do," he said. "I had no idea it would be a mile and a half from where I grew up. But it's truly been a tremendous honor and privilege."

Adam Shaffer was named coordinator of the ambassador program for the NPS in 2006, and helped guide the transition from a community grass-roots effort to a function of the park service.

"The ambassadors are the teachers of future generations about what happened on Sept. 11," he said.

The program was launched in January 2002 – just four months after the 9/11 tragedy – with Shaffer's aunt, Donna Glessner, serving as coordinator.

Even as a makeshift memorial – mementos and letters attached to a chain-link fence, an American flag at the point of impact – was popping at the crash site, volunteers were there, talking with visitors who wanted to know more about what had happened on 9/11.

Custer recalled that in those earliest days the volunteers had no uniforms, and often worked out of their cars.

In a 2006 Tribune-Democrat story that also appears in the 2011 book "Heroes Were Made," Glessner explained why the ambassadors program was started: "It didn't seem right to have no one here."

'The story tells itself'

Adam Shaffer said there are generally between 40 and 50 individuals volunteering as ambassadors. Some who participated soon after the crash have passed on – not experiencing the construction of the permanent memorial, walking through the displays at the visitors center or hearing the tones from the Tower of Voices.

Custer called the memorial site "a special place. Even when I'm not working, I come out here and walk the grounds."

"When this first happened, everything was so emotional – especially at the temporary memorial," Custer said. "It was incredible to see how people reacted when they came out here. You could see what they were thinking."

She said ambassadors go through six weeks of training, reading "stacks of information we had to know," then shadowing a veteran ambassador before stepping out on their own.

Perry said: "You never know what kinds of questions you're going to get. And we try to find the answers if we don't know. And we meet people from all over the country and the world. It's pretty amazing."

Perry said volunteers "have to have such a passion" for greeting visitors to the site and recounting what happened there in 2001.

"You can't put a price on what we do," she said. "We're paid by the thank-yous from visitors and the appreciation of the family members."

For Shaffer, whose entire adult life has been connected to the Flight 93 crash site and national memorial, telling the story "keeps it real for so many people who come here."

Flight 93 is about courage and sacrifice by the passengers and crew, and a wonderful community that responded immediately in the face of an unspeakable tragedy, comforting the families of those who died there, and then embracing the duty of keeping the memory of those 40 heroes alive by sharing that inspiring narrative with visitors to the site.

"The power of this story and what happened here doesn't need any embellishment," Shaffer said. "If you tell this story from your heart, the story tells itself and the power comes through."

Chip Minemyer is the editor of The Tribune-Democrat and TribDem.com, and CNHI regional editor for Pennsylvania, Maryland and Ohio. He can be reached at 814-532-5091. Follow him on Twitter @MinemyerChip.