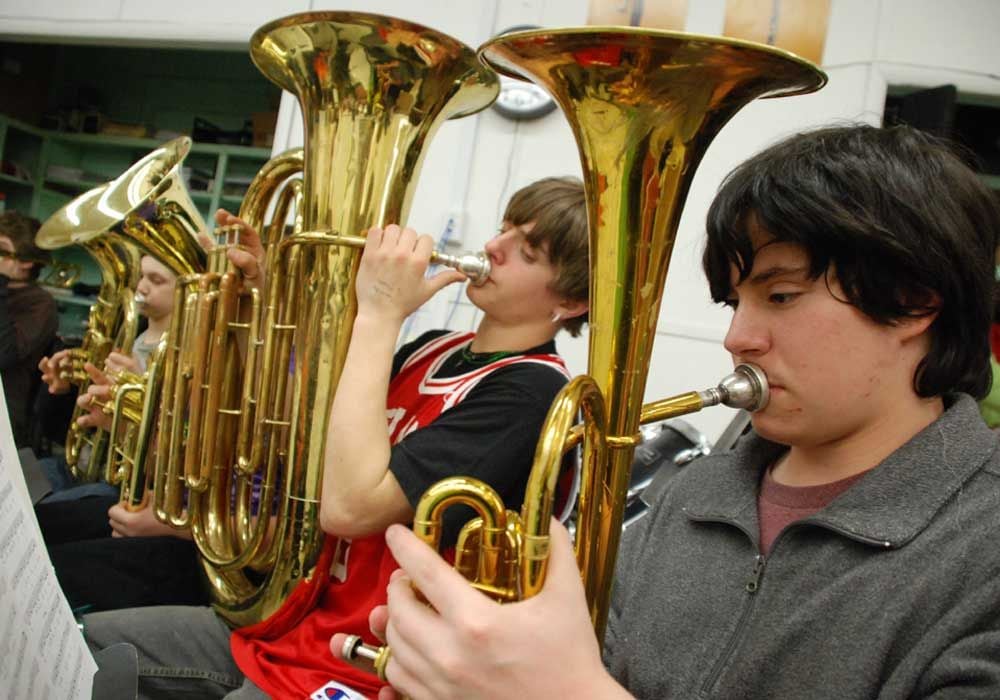 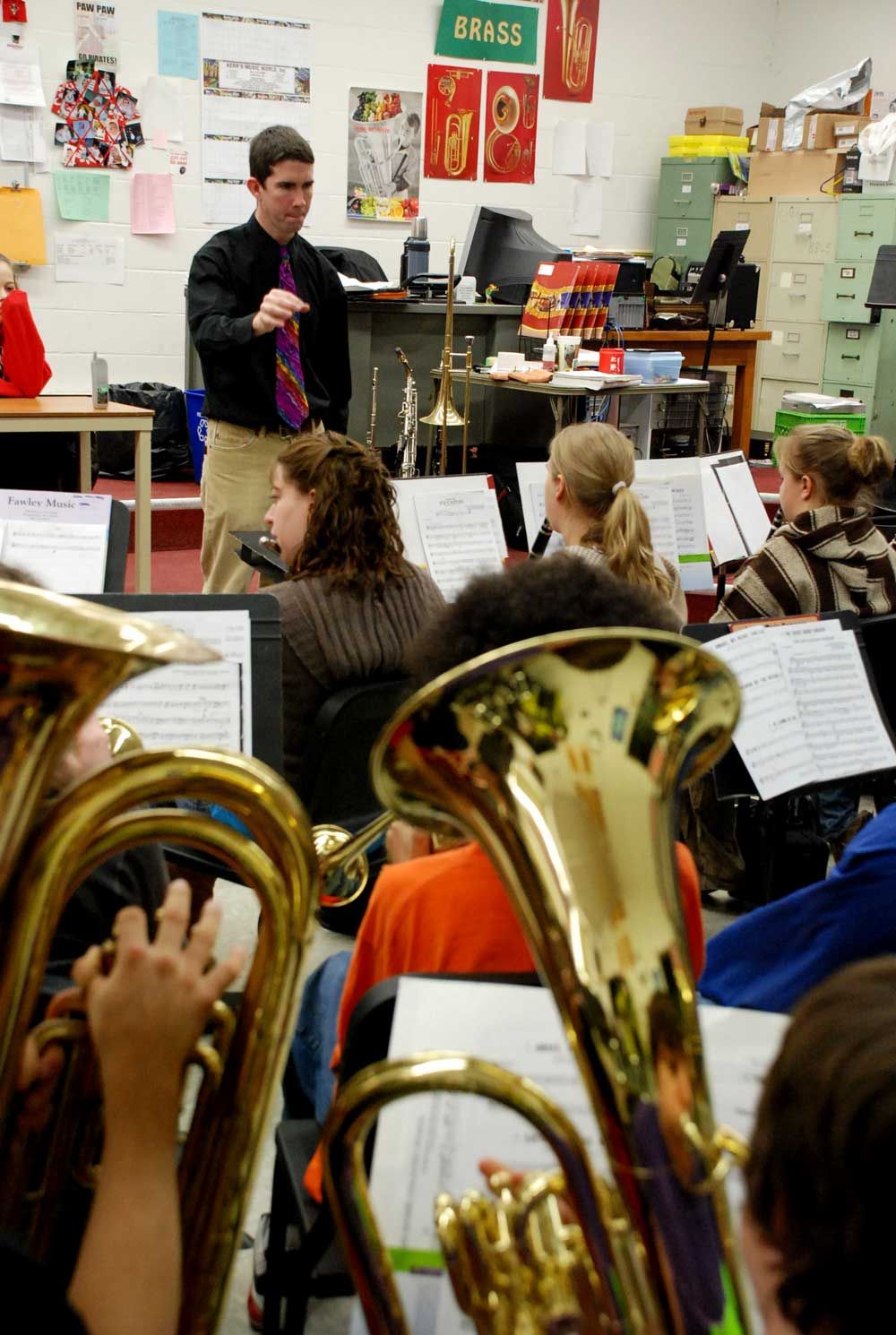 Trumpet player Loren Holliday and other band members practice in the band room. Below: Paw Paw High School band teacher Ian Helmick directs practice. The musical Pirates will be the 10th band in the parade line for the inauguration of West Virginia Gov. Joe Manchin in Charleston Monday.

Trumpet player Loren Holliday and other band members practice in the band room. Below: Paw Paw High School band teacher Ian Helmick directs practice. The musical Pirates will be the 10th band in the parade line for the inauguration of West Virginia Gov. Joe Manchin in Charleston Monday.

PAW PAW, W.Va. — There are more students in bands at high schools in cities such as Parkersburg or Morgantown or Huntington than there are in all of Paw Paw High School. That fact, however, will not keep the Paw Paw marching Pirates, 35 strong, from strutting the school colors of red and black and blaring, what else, “Country Roads” as they sashay down Charleston’s Kanawha Boulevard Monday heading for the Capitol and the second inauguration of Gov. Joe Manchin. Paw Paw’s band will be one of three dozen representing high schools and universities from Weirton to Welch, from Martinsburg to Matewan, and all points in between. “Almost heaven, West Virginia Blue Ridge Mountains, Shenandoah River” The parade in which the bands will march and perform was reinstated during Manchin’s first inauguration in 2005. There had not been a similar ambulatory musical celebration for an elected governor since Arch Moore took office in 1973. “We are so proud of our band and the members are very excited about going to the inauguration,” said Principal Michelle Fleming. “They have been outside practicing just about every day in spite of the cold weather.” Wednesday was just a little too cold in the opinion of Band Director Ian Helmick, so tubas and trumpets and clarinets and drums — a lot of drums — stayed put in the band room where one almost expected an appearance by John Denver once the group broke into its inaugural-day song. “Life is old there, older than the trees Younger than the mountains, blowing like a breeze” For about half of the band members, ranging from seventh to 12th grades, this will be the first trip to their state capital. “We got the word that we would be included about mid-December,” Helmick said. “The students have been working hard since then.” There is a high percentage of participation in band at the school, which has about 225 students K-12, but just 65 in the top four grades — 20 seniors, 10 juniors, 17 sophomores and 18 freshmen. “Our uniforms are old uniforms donated to us by Fort Hill,” Helmick said, referring to another red-clad school 25 miles distant and a state away in Cumberland. The band will have to cover a lot of country roads just to get to Charleston. The trip will be of the whirlwind variety. “We are going to bring the students to the gym at 9 p.m. Sunday and we’ll have games and other activities available to keep them occupied,” Fleming said. One of the goals of the activities, students suspect, is to tire them enough so that they sleep while in the tour bus that will leave downtown Paw Paw at 2 a.m. Monday, heading north to Cumberland and then west to Morgantown before actually turning south in the direction of Charleston. “We’re looking at about six hours one way,” said senior tuba player Chris Kendall. After breakfast and at about 10 a.m., the musical Pirates will be the 10th band in line and will march and play for about one mile before watching the 1 p.m. inauguration, getting back on the bus and returning to Morgan County and the town so nice they named it twice about 8 p.m. “Country roads, take me home To the place I belong” Rebecca Pracht, whose 10th-grade son, Tim, is a trumpet player and who has two other children at the school, said this is the highest excitement level she has seen at the small town’s center of learning. A state grant will pay the bulk of the $2,700 needed to rent the tour bus, Fleming said. Kristin Bradford is a senior clarinet player. “It will be a long bus ride, but I think we’ll be pumped up and ready,” she said. “If anybody falls asleep, the wake-up call will be the tuba,” Kendall added. Practice wore on Wednesday. The band worked through a mean rendition of “The Lion Sleeps Tonight” and a softer number, “Ice Castles,” musical exercises in preparation for the big day. Fleming recognizes that during the years there has been talk about closing Paw Paw High School, one of the smaller Mountain State schools. “I’ve been here seven years and there hasn’t been any more talk about it,” Fleming said. “We are actually adding activities, such as cross country. In 2006 we were named an Exemplary School by the State Board of Education. I think when I first came here the people of Paw Paw looked at me and wondered if I was here to close the doors. That’s not the case. I love it here and hope I can retire here.” “... the place I belong West Virginia, mountain momma Take me home, country roads.” Contact Michael A. Sawyers at msawyers@times-news.com.

Arch Moore remembered for his devotion to West Virginia

CHARLESTON, W.Va. (AP) — Three-term Gov. Arch A. Moore Jr. is being remembered for his devotion to West Virginia.