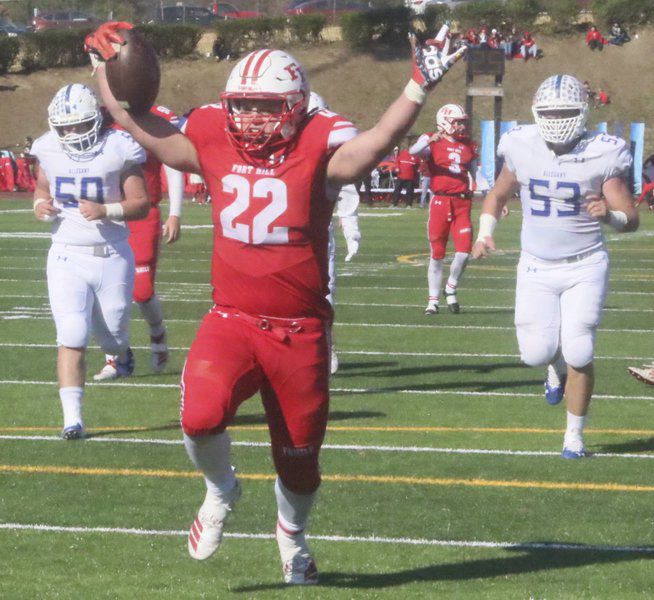 Fort Hill's Carson Snyder (22) signals for a touchdown as he runs into the end zone during the third quarter of the Sentinels' 38-14 homecoming victory over Allegany on Saturday at Greenway Avenue Stadium. Snyder scored three touchdowns on the afternoon. 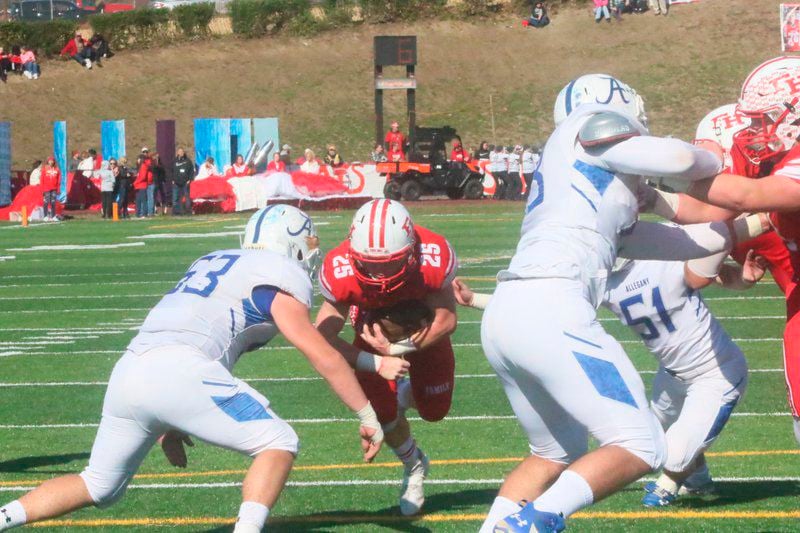 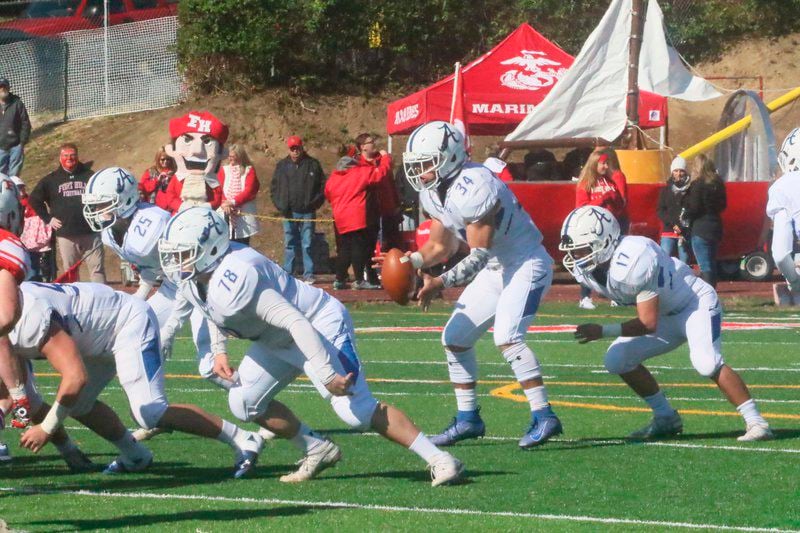 Fort Hill's Carson Snyder (22) signals for a touchdown as he runs into the end zone during the third quarter of the Sentinels' 38-14 homecoming victory over Allegany on Saturday at Greenway Avenue Stadium. Snyder scored three touchdowns on the afternoon.

CUMBERLAND — Big Red struck again, as Carson Snyder reached the end zone three times and jump started the offense in a 38-14 win over Allegany in the 46th installment of Homecoming Saturday at Greenway Avenue Stadium.

Snyder led all players with 21 carries for 180 yards, nearly out-gaining the Campers on the ground, with two second-quarter touchdowns to expand the Sentinels lead to 21-0 at halftime.

The victory was the 14th straight over the Campers and the 12 consecutive Homecoming win.

Allegany finished with 243 total yards to Fort Hill’s 387 and rushed 38 times for 184 yards with a pair of fourth-quarter scores.

“Effort-wise? I couldn’t blame anything on them at all,” Allegany head coach Bryan Hansel said. “I thought they came out, they competed, they had energy, they had effort. They could’ve … in the second half, they came out, they gave up a score. They could’ve folded. We didn’t. We went on a drive. I’m proud of the fight. You lose the turnover battle against a team like this, that’s never good, but our kids didn’t let that bring them down. They kept competing and I’m proud of them.”

The Campers received the opening kickoff and started with the ball at their own 20, where Trevan Powell started at quarterback due to Grant Cain recovering from a concussion.

“He got it (the concussion) at Northern,” Hansel said. “It was a punt, he dove, got hit in the back, helmet came off. He failed six of the symptoms. He’s a three-sport athlete and we always take care of our kids and always leave that to our trainers, so they made the right decision. I just hope he’s healthy for basketball.”

Powell operated out of the pistol, the formation he spent most of the game lining up in along with the wildcat. Quarterback isn’t a position completely unfamiliar to Powell, as he played some QB during his peewee football days, according to Hansel, and played quarterback his freshman year during Little Homecoming when Cain got injured.

“He went in and performed well there too,” said Hansel. “We just knew the ball had to go to him and we had to let him control our offense. And I thought JD (Shambaugh) stepped up tremendously for him. We waited a little too long, and that’s on me, to get JD involved in the first half, but things went, fumbles and that, and we were moving the ball, and then fumbles we gave up, that kind of beats you up. So I’m just proud of these kids. I wouldn’t want to coach anyone else. I don’t care what anyone says. I’m glad to be here.”

Powell ran up the middle on Allegany’s first two plays from scrimmage, gaining four yards on each. On third-and-2, he fumbled the snap and fell on the ball to prevent a turnover, forcing a punt.

The Sentinels took over at the Allegany 43 and wasted little time getting on the board — quarterback Danny King sent Colby Santmyire in motion to the left, then handed the ball off to Breven Stubbs, who juked a defender and scampered up the right side for a 24-yard gain.

On the next play, King faked the handoff right and called his own number, rolling left and going up the sideline for a 19-yard touchdown run. King tacked on the PAT to give Fort Hill a 7-0 lead at the 9:31 mark.

The forecast called for more Powell on Allegany’s ensuing drive, as he gained seven and nine yards on the first two plays. After no gain on first down and an incompletion on second down, the Sentinels gobbled up Shambaugh in the backfield for a two-yard loss, forcing another punt.

The Camper defense responded, forcing a turnover on downs on four plays after they came up with a stop on fourth-and-2, but a false start penalty and a fumble stalled Allegany’s next drive and led to another punt.

The Sentinels’ ensuing drive carried over into the second quarter, with a three-yard run by Snyder on third-and-2 to keep the drive alive on the first play of the second stanza. Four plays later, on fourth-and-5 from the Allegany 8, Dorian Terrell intercepted a Breven Stubbs pass at the front of the end zone and was ruled down at the 1-yard line.

The Campers were unable to get much going on their next drive, but a 46-yard punt by Brayden Hedrick from the shadow of his own goal posts gave the Allegany defense some breathing room.

From there, however, it was all Fort Hill as the Sentinels scored on their next five possessions to close out the game.

The Sentinels started at their own 48 following the punt, with King completing a four-yard pass to Andrew Smith on first down. Snyder was handed the ball five times for runs of 14 and 10 yards before running five yards on first down from the Allegany 24, then 18 to set Fort Hill up at the 1. Snyder finished the drive standing up. King’s PAT made it 14-0.

Fort Hill forced a fumble on the second play of Allegany’s next drive that defensive standout Alijah Metz recovered at the Campers’ 30.

The Sentinels took full advantage, scoring on six plays with Snyder going in from a yard out three plays after a 30-yard pass from King to Stubbs. King booted the PAT to make it 21-0 54 seconds left before halftime.

The 30-yard reception by Stubbs was on third down — with 15 yards needed for a first down in this instance — where the Sentinels finished 4 for 7. Allegany was 2 for 9.

“I just think it’s the offensive line and knowing that we have to convert that third down,” said Appel. “I think they do a good job. That’s an experienced offensive line that played 13 games last year except for Gage May and Alex Case, but they’re two good additions, too. So I’m thankful that they know the situation and they want to move the chains and they don’t want us to punt so we keep the other team’s offense off the field. Sometimes the best defense is a good ground game offense.”

The Sentinels carried the 21-0 lead into the locker room at the break, as Snyder finished the opening half with 96 yards on 13 carries, with 61 on nine attempts coming in the second quarter.

“Well, the O-line really stepped it up,” said Snyder. “They realized what was going on and they stepped it up. It opened the holes and I was able to break a few tackles.”

“Fortunately we have more kids,” Appel said. “And we have more depth. And it helps to keep at it and keep at it. They played hard, but we kept at it. I thought things started to open up a little bit better and we started finding some holes. Allegany did a good job preparing.”

Fort Hill came out of halftime and marched across the 50 and into Allegany territory, but a run for negative yardage, an incompletion and a penalty stalled the drive, eventually setting up a 48-yard field goal for King, who blasted the ball into some wind and through the uprights.

The field goal was two yards shy of his Homecoming record of 50 yards set last year.

“The wind was kind of in my face,” King said, “so I just knew I had to stay straight through the ball and follow through and everything would take care of itself.”

The Sentinels forced a punt on Allegany’s drive following the field goal and extended their lead to 31-0 with a little over a minute to go in the third when Snyder rumbled through the line and followed his blockers into the end zone from 23 yards out.

The Allegany offense began opening up late in the third and early in the fourth, with a 17-yard run by Powell sandwiched between runs of 8 and 23 yards by Shambaugh to close out the third.

Powell opened the fourth with a 13-yard scamper, but holding and false start penalties gave the Campers first-and-24 from the Fort Hill 34. Four plays later, on fourth-and-17 from the 27, Terrell got the Campers down to the one with a one-handed grab on the left sideline, hauling in a 26-yard pass from Powell.

From there, Powell ran it up the middle, following his linemen and getting into the end zone. The PAT hit the upright, making it 31-6.

Fort Hill responded with a 4-yard touchdown run by Santmyire, with runs of 32 yards by Stubbs and 15 by Santmyire setting up the score. Robert Bower kicked the extra-point at 5:35 to put the score at 38-6.

The Campers struck last, embarking on a 15-play drive that spanned 80 yards and took 5:28, with Terrell catching another fourth-down pass from Powell, this one on third-and-10 from the Fort Hill 34 to set the Campers up at the one. Powell called his own number again, rushing in from a yard out. He also ran in the two-point conversion, which put the score at its final with seven seconds to play.

A trio of players ran for more than 50 yards for the Sentinels, who carried the ball 45 times for 353 yards. Santmyire had eight rushes for 54, Stubbs eight for 53 and King seven for 51.

“I think that was key for us,” said Hansel. “We gave up some big plays, but not the home run ball. And I thought that allowed our kids to stay in the game. You give up one of those, you see the shoulders slump like we have in the past and some of this season. So I was proud of that. They bottled them up and I think some of those kids that got hit for Fort Hill, I think they felt us. I think they felt our energy, they felt our passion and I’m just proud that we competed.”

Shambaugh finished with 11 carries for 65 yards.

“The way these kids performed — they’re all young,” said Hansel. “Most of them are back. You had a great performance from JD and Robbie (Suesse) and Tyler Dunmeyer and Dorian Terrell, a senior, out here with two great catches. We’ve been hard on Dorian and he showed up in the biggest game and made some plays. We’re going to miss some seniors, but we got a lot of young kids back and we just gotta get numbers and keep performing.”

The Campers finish the regular season at 2-7 and await Sunday’s seeding for the state football tournament by the MPSSAA to decide next week’s playoff and non-playoff matchups.

Bigger than any roar from a touchdown or the final horn sounding the end of the game was the ovation received from both sides of the stadium when Ben Starr was announced as a co-captain for the Sentinels prior to the coin toss.

Starr, a junior at Fort Hill, was diagnosed with T-cell lymphoblastic lymphoma, which required him to miss the season and undergo chemotherapy.

“It just means a lot,” Starr said. “I haven’t really seen any of these guys since early in the summer, so it just meant a lot to be here and watch them play.

Fort Hill (8-1) is expected to get the No. 2 seed in Class 1A West and host a playoff game next week.