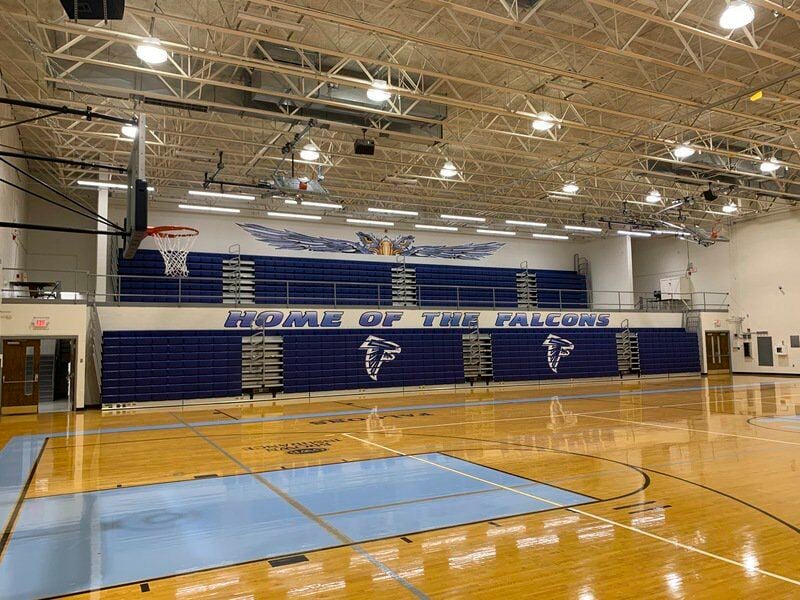 Frankfort High School’s new bleachers replaced the original ones from 1976 as part of its $140,000 gym remodeling project. The process, beginning in mid-April, was completed earlier this month. 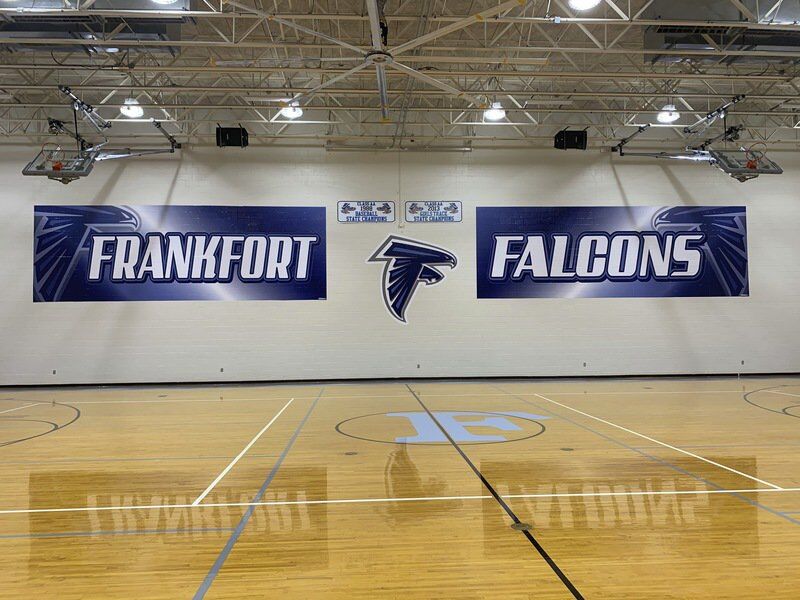 Frankfort’s new wall art was supplied by Benson Designs. The wall behind the benches and scorers’ table used to have pictures of senior student-athletes.

Frankfort High School’s new bleachers replaced the original ones from 1976 as part of its $140,000 gym remodeling project. The process, beginning in mid-April, was completed earlier this month.

Frankfort’s new wall art was supplied by Benson Designs. The wall behind the benches and scorers’ table used to have pictures of senior student-athletes.

SHORT GAP, W.Va — While much of the world has been at a standstill this year, Frankfort High School has been busy upgrading its gym.

The Falcon girls and boys basketball teams finally have a gym befitting two teams frequently near the top of West Virginia’s Class AA.

“I think it’s going to increase school pride,” Frankfort Athletic Director Jay Hesse said. “I’m big on branding your facilities. One of my coaches said, ‘We’re spending all this money, but it’s not going to help win us a championship.’ And I said, people take pride in things, so we might get more kids to come out and one of those kids might help us win a championship.”

The upgrade cost $140k in total, 85% of which was footed by the Frankfort Athletic Boosters, with the rest coming out of the school board’s and Frankfort’s budget.

Frankfort initially received some pushback from people who thought the board should pay for the renovations, but Hesse and the booster club knew they’d be unlikely to get help fiscally.

“We’ve been talking about the bleachers for a while,” Hesse said. “We knew that unless they were condemned, we wouldn’t get help with it. They weren’t in bad enough shape to be condemned because the metal structure underneath was still okay. They just looked like trash.

“So the booster club decided, ‘Okay, we’ve had a good year, let’s replace the bleachers.’”

The project began in mid-April with the old bleachers’ removal, after which holes left from the original seats were filled and primed. The back wall was painted with a Falcon mural. Then, the new bleachers were installed and old rails were repainted from blue to silver.

The pads under the baskets were replaced, and the floor was rewaxed and repainted like it is every year.

On the side opposite the stands, pictures of senior student-athletes used to adorn the wall. Each year, those photos required new holes, leaving 15 years of divets in the wall totaling somewhere in the thousands. Those were filled with mortar and the wall was painted.

Shawn Benson of Benson Designs then attached new murals to the wall. Benson also made hallway signs and arrows to aid in social distancing once school starts up in September.

In the coming months, Hesse hopes to have digital displays near the entrances to the gym installed for sponsors and announcements.