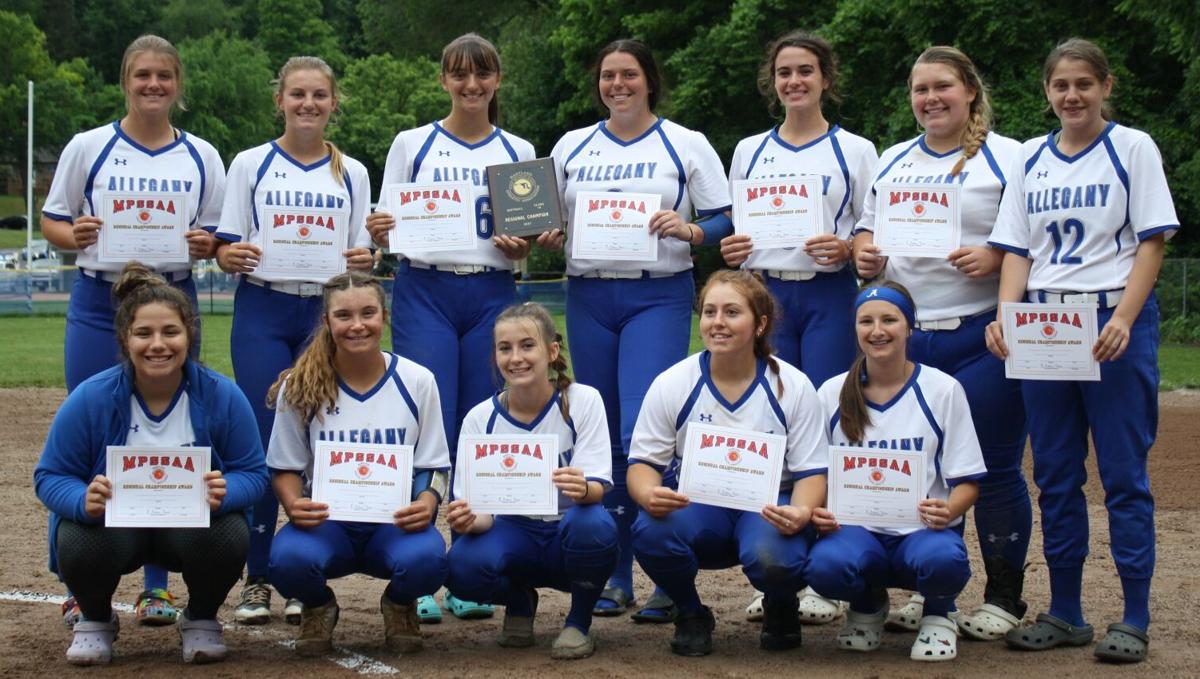 Allegany poses with the 1A West Region I co-championship plaque at Lions Park in LaVale on Friday. The Campers beat Fort Hill, 10-0, to advance to the state tournament next week. 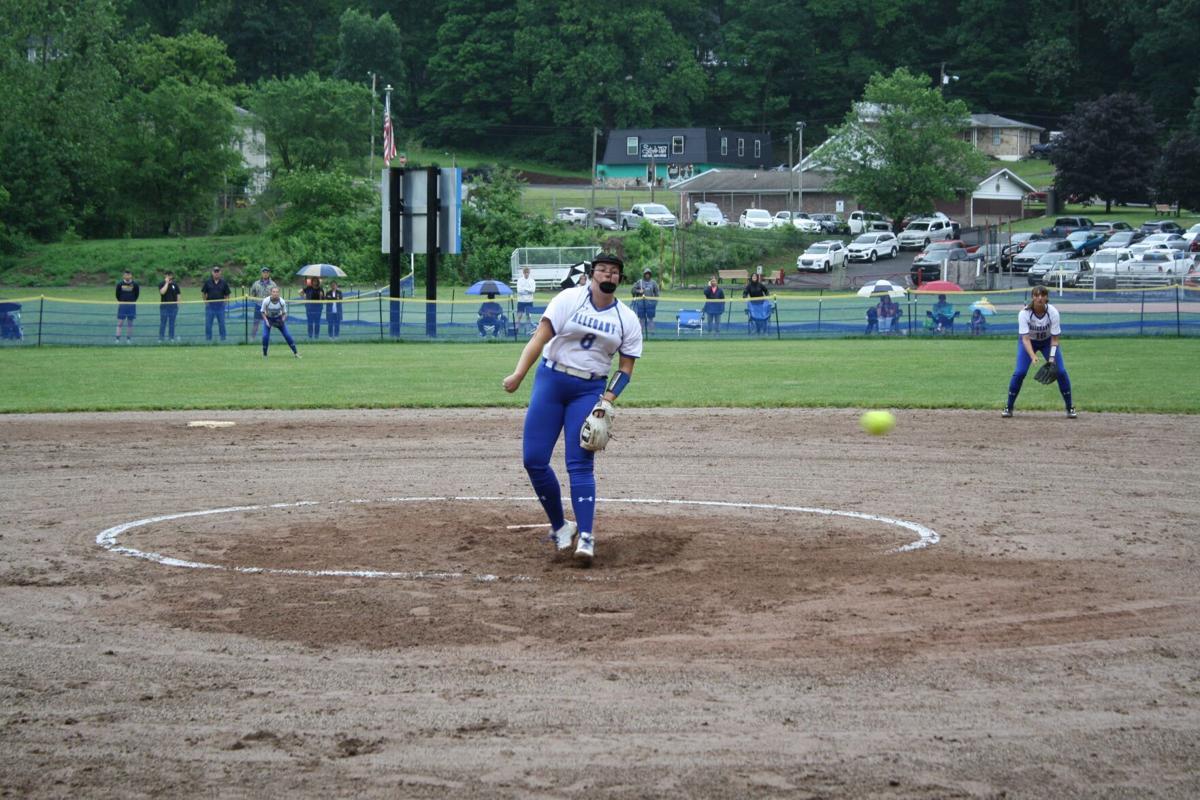 Allegany pitcher Kyra Pittman deals during the second inning in the 1A West Region I co-final against Fort Hill at Lions Park in LaVale on Friday. Pittman struck out 13 to help the Campers to a 10-0 win and the title.

Allegany poses with the 1A West Region I co-championship plaque at Lions Park in LaVale on Friday. The Campers beat Fort Hill, 10-0, to advance to the state tournament next week.

Allegany pitcher Kyra Pittman deals during the second inning in the 1A West Region I co-final against Fort Hill at Lions Park in LaVale on Friday. Pittman struck out 13 to help the Campers to a 10-0 win and the title.

CUMBERLAND — A well-rested Kyra Pittman is a recipe for disaster.

Allegany had been idle for nine days after a first-round bye and a forfeit to begin its playoff run, and Pittman — who blows hitters away in the circle on nine hours rest let alone days — had a little bit of extra juice against Fort Hill on Friday.

Pittman struck out 13 and allowed just one hit, and the Campers’ offense, led by Samara Funk and Riley Gallagher, supplied more than enough provisions for Allegany to rout Fort Hill, 10-0, to win the 1A West Region I Co-Championship.

“It felt strange, we were playing on a different field and we had nine days off,” Campers head coach Brian Miller said. “I thought we responded well.

“(Pittman’s) so strong. I don’t know how much rest she needs. But I think the time off let her work on a couple of pitches, just get them dialed in a little better, so she felt really confident.

“We swung the bats well. We just want to put it in play and see what happens, avoid putting it in the air too much. I was pleased with the way we hit, and we’ll have to keep hitting if we’re going to win because we’re going to run into some good competition here in the next week.”

By capturing the region final, Allegany advances to the state quarterfinals.

If Patterson Mill (18-0) beats Colonel Richardson in the Region I co-final today — which was postponed a day due to weather — the Campers (10-0) will be the state No. 2 seed and host Monday. If Patterson Mill falls, Allegany becomes the top seed and gets a first-round bye into the Final Four.

The Campers’ matchup with Fort Hill had an unusual feel, with rain from the previous night soaking the main field and forcing the teams to square off on the far diamond.

Different field, same Pittman. The senior was locked in from the first pitch; she retired 14 of the 17 hitters she faced — and only one batter, Lydia Linaburg, worked the count beyond two balls.

Linaburg reached on a free pass, Carly Bennett was plunked by a pitch and Emily Wilson legged out an infield single for Fort Hill’s only base runners, though Wilson was thrown out trying to steal by Gallagher for the final out of the third inning.

The added time off proved wonders for the hard-throwing ace.

“I got to rest up, I feel like 10-times better,” Pittman said. “I just went out there and pitched, treat every game like it’s the same.

“We have girls that can hit, and we have a strong, solid defense. I don’t have to strike out all 21 batters, I can always rely on them.”

Because Allegany’s offense showed up in a big way, Pittman only needed to get 15 outs.

Gallagher got the Campers started by shooting a two-run single passed a diving Olivia Looker, the Sentinels’ shortstop, into left field with two outs in the first inning.

The Allegany backstop finished the day 3 for 3, matching Funk for most hits in the contest. Funk cut Fort Hill’s day short with a walk-off liner to center with one out in the fifth to plate the Campers’ 10th run, securing the run rule.

Funk had the evening’s top base-knock in the third when she nearly left the yard on a line, settling for a gap-splitting double. The Frostburg State signee ended 3 for 3, driving in two runs and scoring three times.

Fort Hill was without its top pitcher Ally Myers, who tore her ACL running the bases in the teams’ meeting two weeks ago. Myers retired 17 straight at one point against Allegany on June 1, and the Campers pounced on the undermanned Sentinels in her absence.

“Sometimes when you play a team three times, it can go one of two ways,” Fort Hill coach Guy Robertson said. “Things can tighten up, or people find where the cracks in the armor are. Today it just wasn’t a very good day for us.

“No excuses, with a depleted lineup and a depleted roster, a lot of things were different from the last two times we played. I think that showed up on the scoreboard, but I can promise you that didn’t mean we came out with any less heart or any less intensity.

“They’re just better than we were today and those girls deserve it. They should be proud of what they accomplished. An undefeated season is difficult to do.”

Kelsey O’Neal plated the Campers’ third run with a sacrifice fly in the third. Then, Allegany exploded for four runs in the fourth — all on two outs — and dropped three more tallies in the fifth.

The Campers improved gradually at the dish as the game wore on, evident by their 12 hits in the final three innings after hitting safely just once in the opening two frames.

Katie Sterne was 1 for 2 with two walks, one of which plated a run with the bags full — a pitch before Funk’s walk-off. Her lone hit was a hard opposite-field liner to start Allegany’s scoring in the fourth.

Jaidee Guinn was tabbed with the loss for Fort Hill. The Sentinels finished the season 7-5, coming up just short of a trip to the state tournament.

In his first season at the helm, Robertson is proud of his squad’s resilience. Fort Hill came from behind to win a playoff game 18-8 over Northern in the West semifinals on Wednesday.

To finish out the year, with gutting injuries and uncertainty surrounding the pandemic, is itself an accomplishment.

“The fact that we got to play this season and we got to complete this season,” Robertson said, “and then we got the opportunity to be in a playoff, win a playoff game and play in this game — essentially for a championship — is a great achievement.”

For Allegany, the Campers return to the state tournament for the first time since 2017 when they fell in the title game to Bohemia Manor.

Allegany most recently made it to the final eight in 2019, before the Maryland Public Secondary Schools Athletic Association changed the format to reseed the final eight squads after sectionals.

The Campers were beaten by Brunswick in the West final that season.

Whether Allegany plays Monday or gets a bye to Wednesday, it’ll be ready. The Campers waited more than a week to get their shot at a title last time, they’re chomping at the bit to get a shot at the next chapter.

“I think they’re going to play great. I’m not anticipating anything less,” Miller said. “I feel like they’re really focused right now. It’s really hard to keep them focused for nine days without playing a game, and it didn’t seem to be a problem. They were on it, they were ready to go every day at practice.”