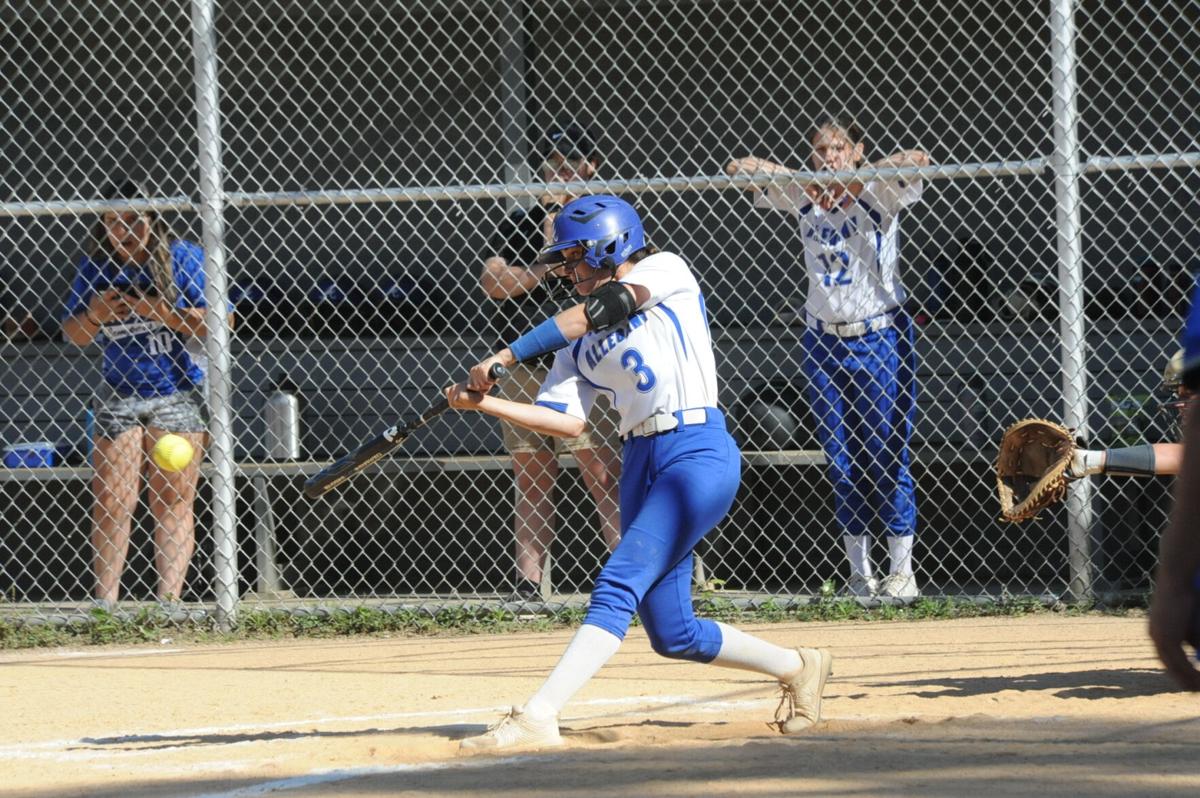 Allegany’s Samara Funk connects on a bases-clearing three-run double in the sixth inning of the Campers’ 7-0 Maryland Class 1A semifinal victory over Cambridge-South Dorchester Wednesday at LaVale Lions Field. 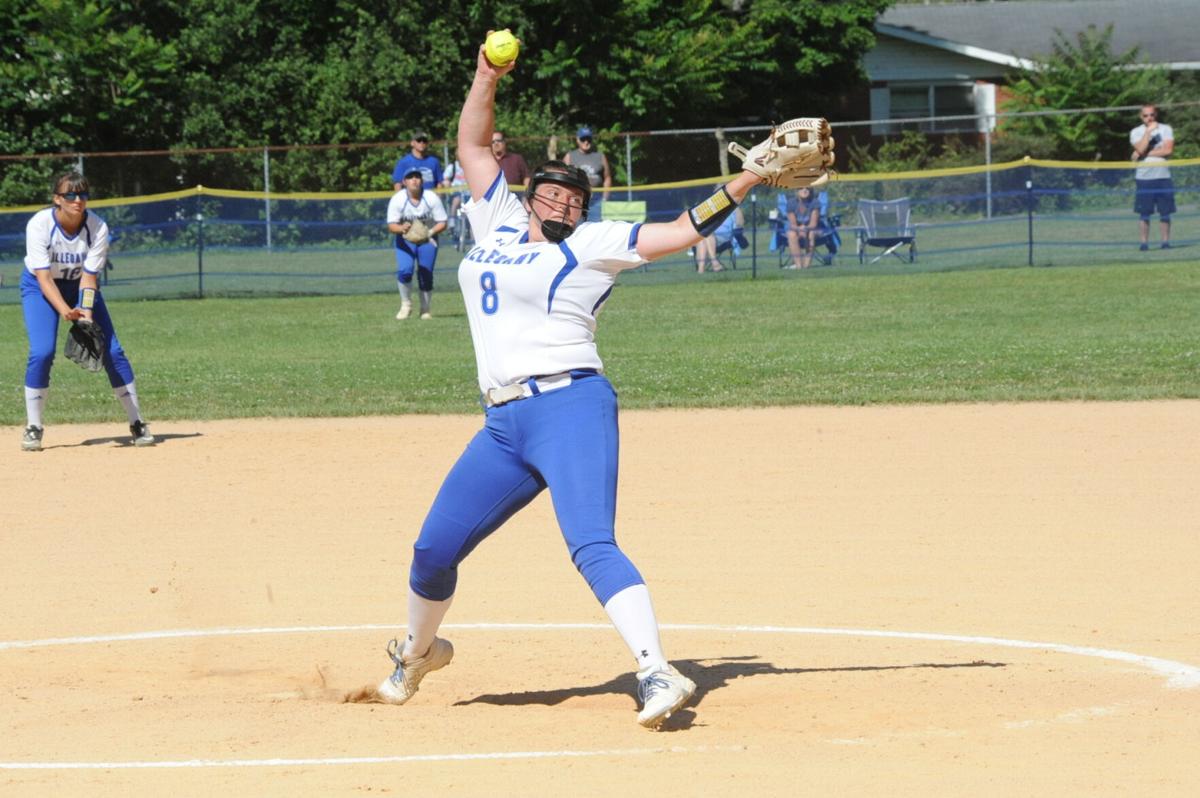 Allegany’s Samara Funk connects on a bases-clearing three-run double in the sixth inning of the Campers’ 7-0 Maryland Class 1A semifinal victory over Cambridge-South Dorchester Wednesday at LaVale Lions Field.

LAVALE — Allegany is a heck of a lot more than just Kyra Pittman.

In the Campers’ most toilsome trial of the season in the 1A state semifinals, their defense was as solid as a rock and their offense laced 11 hits. Oh, and the ever-dominant Pittman fanned 14 in a complete-game shutout.

Though No. 3 Cambridge-South Dorchester sported a Division 1-bound hurler of its own, Pittman got the better of her because her teammates rose to the challenge.

“Everybody stepped up their game today,” Pittman said. “I couldn’t ask for anything more than that. ... That’s what makes a great team a great team, that we don’t just roll over when everything gets tough. We fight through everything and we get the win.”

It began as a pitchers’ duel Wednesday, with Marist signee Madison Pleasants and Pittman, signed to Maryland, dictating play as both teams were held off the scoreboard during the opening four frames.

That quickly changed when the Campers broke through for a pair of runs in the fifth, but they ended all doubt with a five-run sixth. It was a long time coming for Allegany, who had tallied a base hit in every inning despite being stymied early by Pleasants.

“We go up against some really good coaching staffs,” Miller said, “but the job my staff did last night in getting these girls ready for a really good pitcher, not over-coaching it, just a couple minor mental adjustments. For them to come out and hit that well against her, that coaching was unbelievable and I’m not taking any credit for it.”

It was evident from the start of the sixth, which Allegany led 2-0 entering, that Pleasants was beginning to labor. The senior thrower was further taxed by back-to-back free passes on counts that rang full.

Mackenzie Lambert loaded the bags on a bunt single, and Katie Sterne — who finished 3 for 4 at the plate with a double and two runs — kept the train chugging with an infield single of her own for an RBI.

Still in search of a propitious knock to secure the result, Samara Funk delivered a bases-clearing double that rolled to the fence on a first-pitch fastball for a decisive 6-0 lead.

“I honestly felt so confident because I had seen that pitcher three times, and I could see that she was slowing down,” said Funk, who ended the evening 2 for 4 with three ribbies.

“I believe (Pleasants) faced 11 batters that inning and didn’t strike out one,” said Miller. “That’s amazing in itself because that girl is a terrific pitcher. Samara, she’s been clutch all year, she’s a great hitter. And for her to come through with that three-run double, it just relaxed everybody.”

Ryland Kienhofer tacked on one final insurance run with another Allegany infield single, not that Pittman needed it. The senior blew away three straight hitters in the seventh to punch the Campers’ tickets to the state finals.

Pittman was arguably out-dueled during the early stages.

Cambridge-SD had runners on second-and-third in the first, and one more on third during the second, forcing Pittman to expend more energy than Pleasants to keep the contest scoreless.

Yet, as Pleasants lost a few ticks on her fastball, Pittman only got stronger.

Following four damage-free innings, Pleasants finished with a line of seven runs on 11 hits in six innings, striking out 10 and walking five. Pittman allowed just four hits in a seven-inning shutout with 14 K’s and one free pass.

“Madi is amazing,” Rams head coach Kareem Otey said. “I’ve had the pleasure to coach her for four years. She’s everything you want out of a pitcher. It’s going to be very sad to see her move on, but she’s going to continue to play at Marist and I’m sure she’ll do big things there.

“Pittman did a great job. She’s got phenomenal speed, and she was working her way up and down the zone. She definitely kept our batters on their toes. And she’s heading to Maryland, she’s one heck of a pitcher so I can’t wait to watch her on T.V. too.”

“It’s hard to believe, but I think she’s getting better every week too,” Miller said of Pittman. “I think what people miss about her, is that she’s really talented, but she’s really competitive, too. That’s what makes the difference. She is just all-out competitive, she wants the ball all the time.”

If the teams had swapped defenses behind their talented arms, the result might’ve been different. Not that Cambridge’s glovework was poor, Allegany’s was just on another level.

With one out in the fourth, M’Kya Molock placed a slicing liner just above the outstretched glove of second baseman Kelsey O’Neal and into right field. One batter later, Kiley Tyson tried to do the same up the middle, but O’Neal wouldn’t be denied twice.

The senior took the hit away with a leaping grab, then doubled off Molock at first for an inning-ending play.

“You can’t get down on your first one,” O’Neal said, “you always might get a second shot, and I knew I couldn’t miss that play twice. I went out there and made the play that had to be done.

“We work hard in practice every day to get better so we can come out here and make the plays look easy, which is what I thought we did today.”

After Allegany took a two-run lead in the fifth — thanks to a sacrifice fly by Pittman and an RBI single by O’Neal — the Vikings threatened to wrestle it back in the next half-inning.

Cambridge-SD had runners on first and second with one away after back-to-back singles by Pleasants and Kady Willey, but the Campers defense stepped up once more.

Pittman snagged a hard come-backer to cut down the lead runner at third for the second out. The Vikings then tried a trick play, sending both runners halfway on a delayed steal the ensuing pitch, and Pittman didn’t panic.

The senior calmly threw it to third once more, and Kyle Hook levied the tag to get out of dodge. Hook was involved in all three outs that frame after recording the first after denying a well-placed bunt attempt.

The defensive masterpiece appeared to break Cambridge-SD’s backs, as the Campers put the game to bed with five runs in the bottom half.

“Defense has been amazing. I didn’t know that was going to be our strength, and they’ve just gotten better every week,” Miller said. “They work hard at practice on it. We give them a lot of ground balls, a lot of fly balls. For them to keep coming up big, it’s been unbelievable. We’re really sound defensively.”

One game after its best overall performance of the season, Allegany will need another tomorrow to bring home some hardware.

The Campers draw top-seeded Patterson Mill (22-0) in the state championship after the squad routed Clear Spring, 12-0, in its semifinal matchup.

Patterson Mill is led by Syracuse commit Madison Knight, who ended the Huskies’ game Wednesday with a walk-off grand slam to push the edge to a run rule result.

An Allegany triumph would be its first state title since taking the 1A crown in 2010.

“They’re gonna play great, I’m convinced of that,” Miller said. “And I told them, ‘The good thing is, we don’t have to change anything. We just have to keep playing like we’re playing, and we have a really good chance to put that banner up.’”