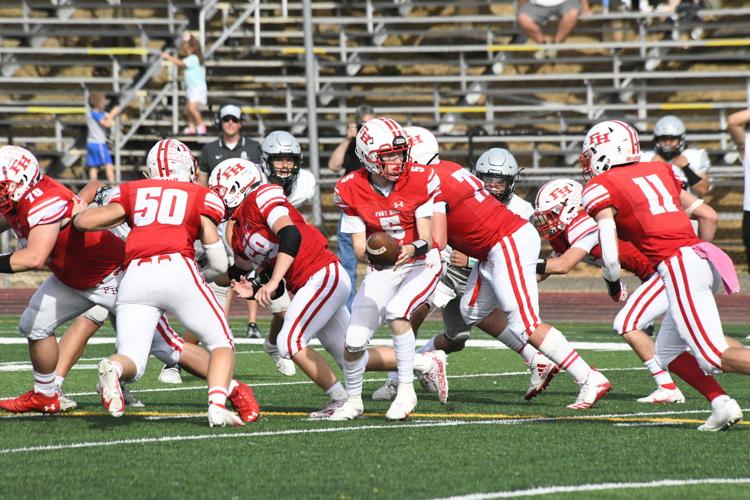 Fort Hill’s offensive line creates a hole for Times-News Player of the Year and unanimous first-team running back Blake White (11) against Oakdale. All five members of the unit made the All-Area team in addition to tight end Jace May. May (25), Tyler Wilhelm (50) and Hunter Vanmeter (not pictured) were first-teamers, and Carter Hess (77), Zander Jenkins (59) and Reese Vogtman (78) slotted on the second team. 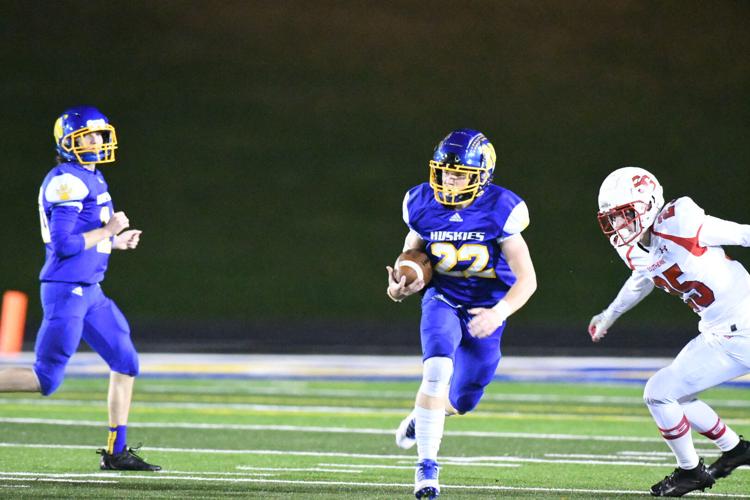 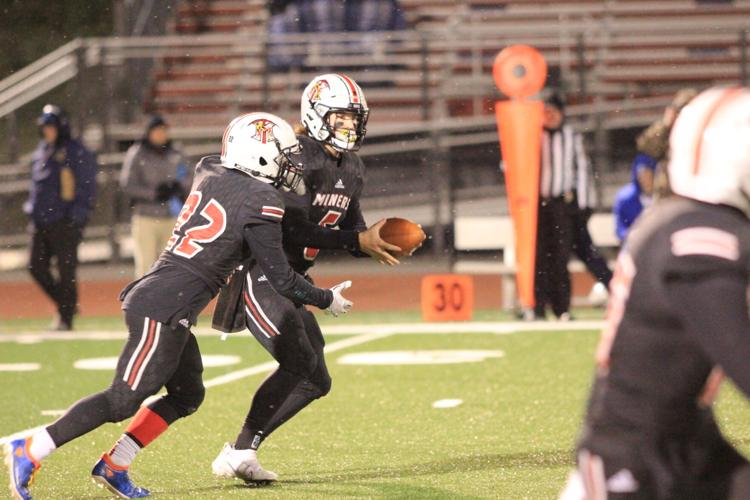 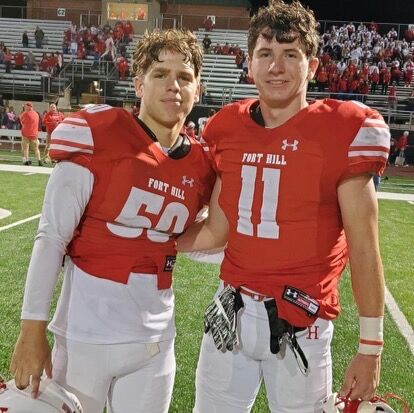 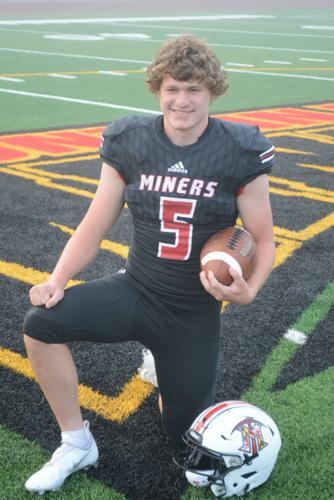 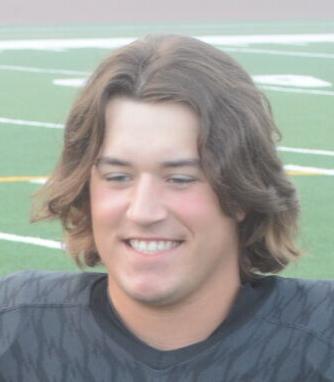 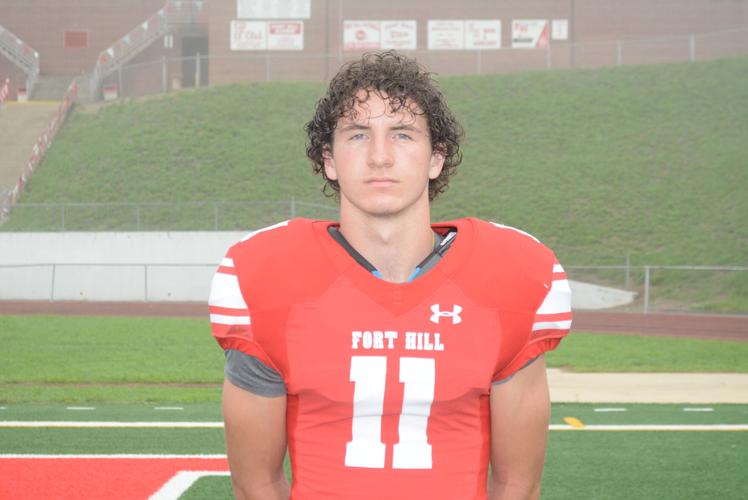 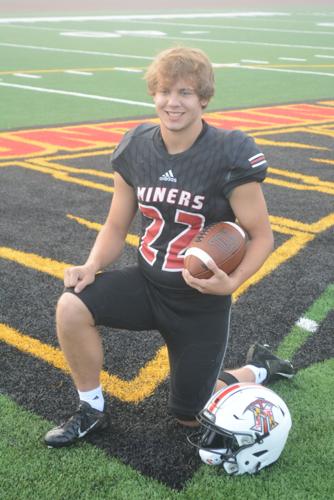 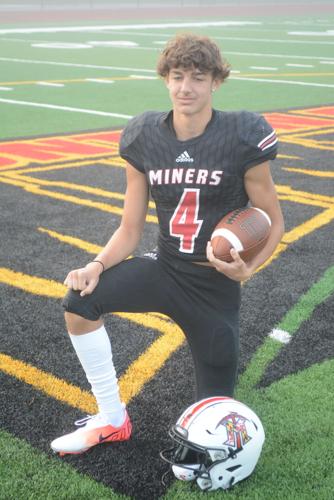 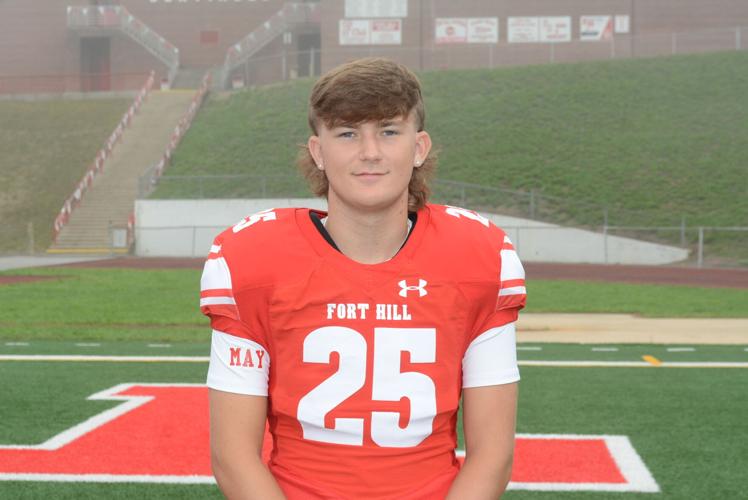 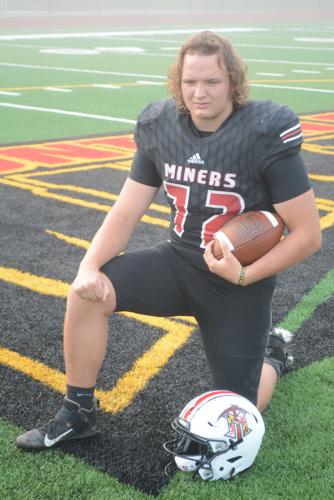 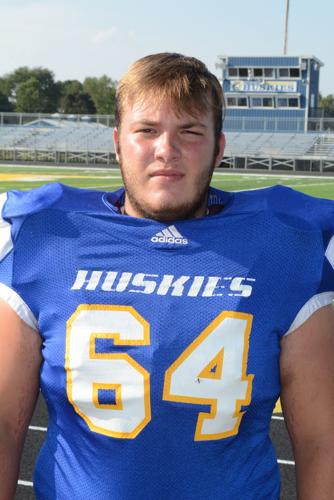 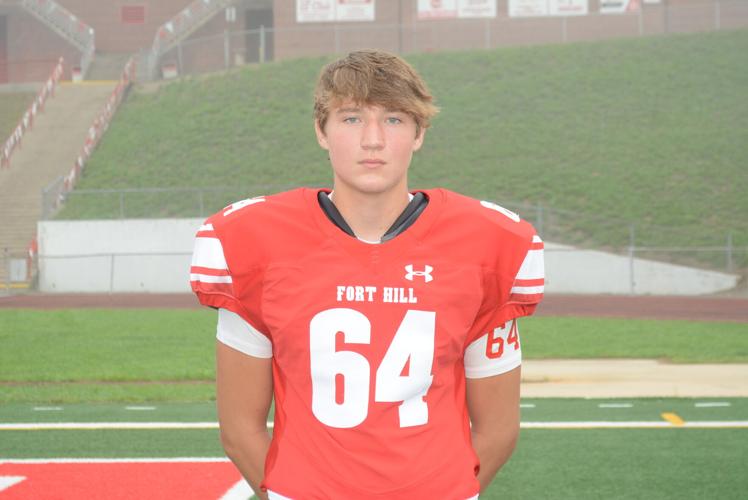 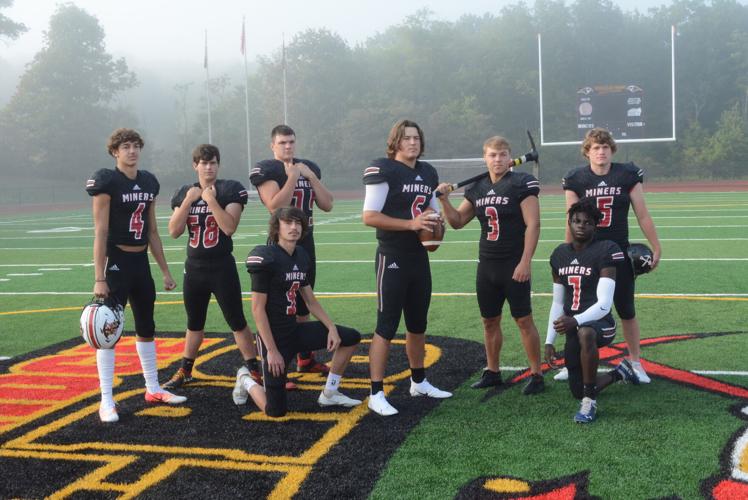 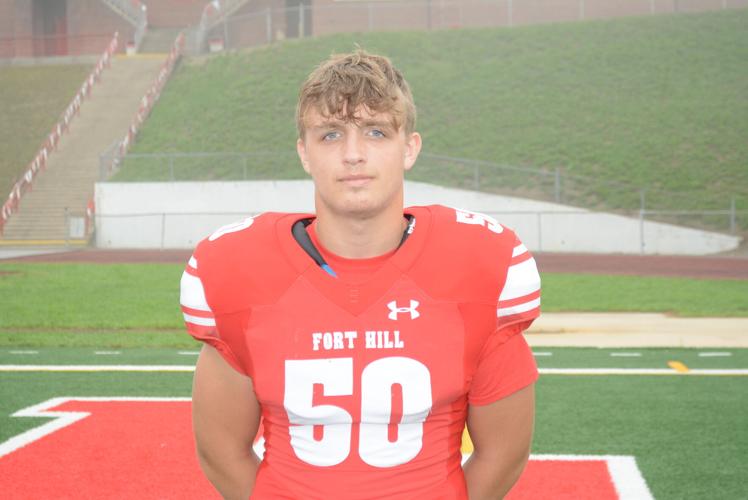 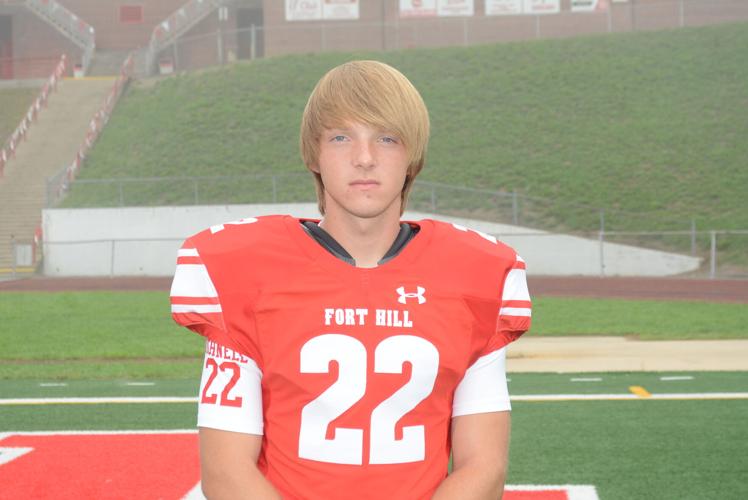 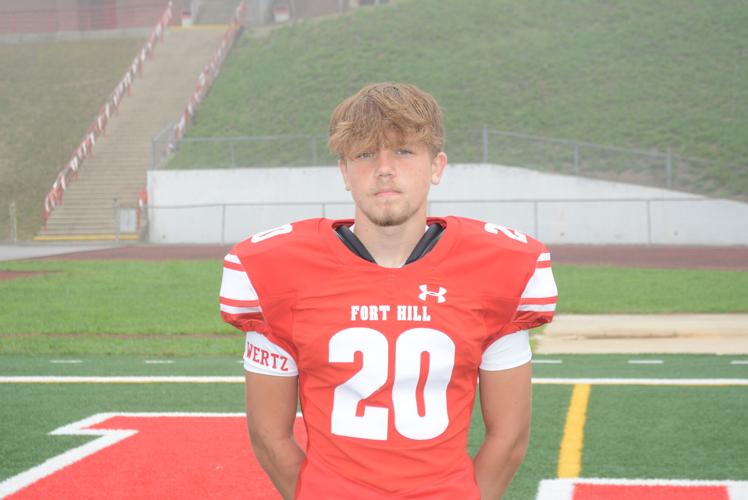 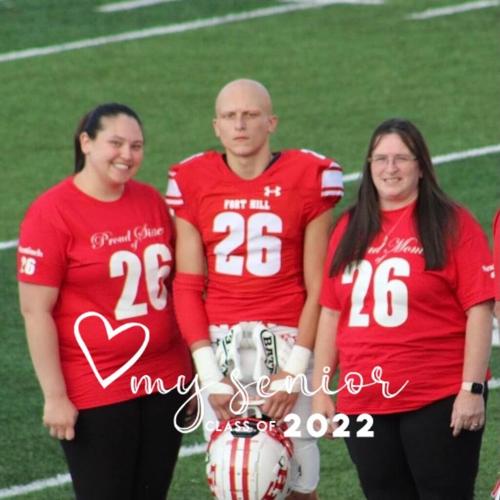 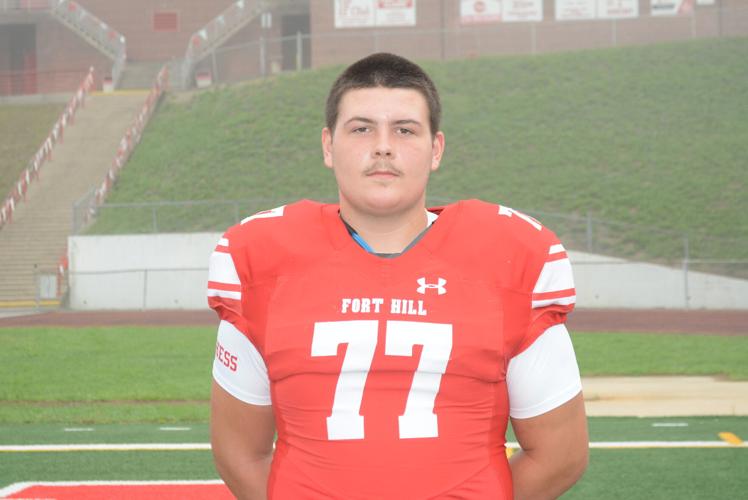 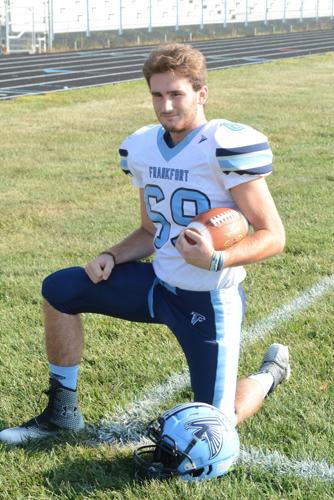 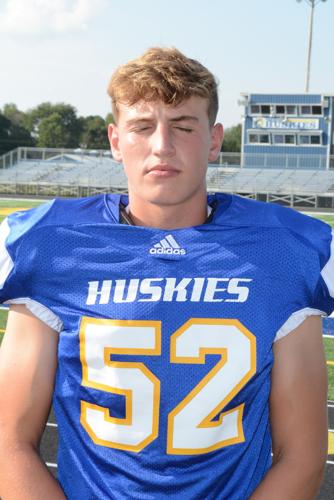 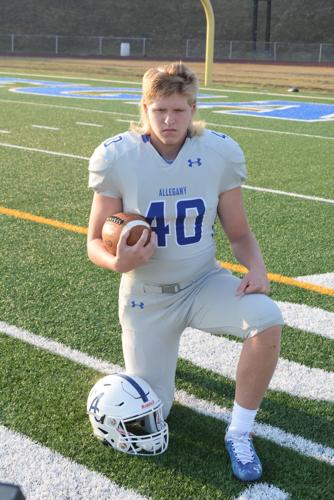 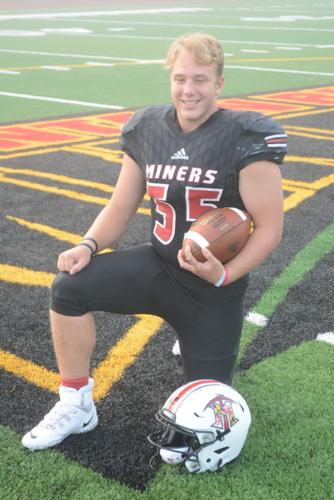 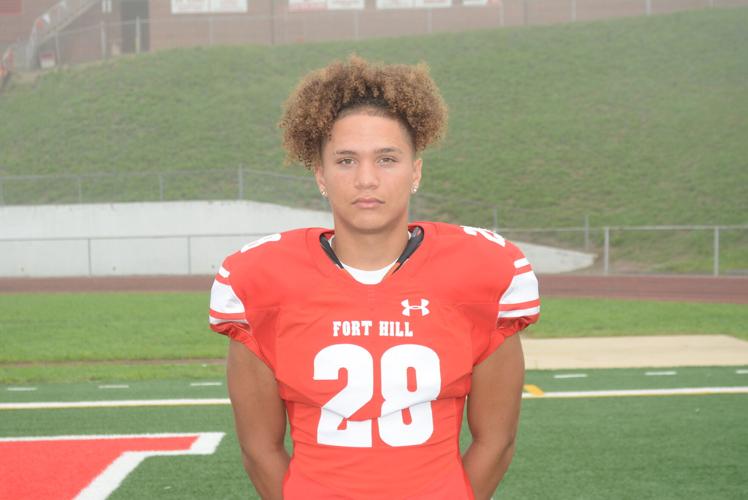 Fort Hill’s offensive line creates a hole for Times-News Player of the Year and unanimous first-team running back Blake White (11) against Oakdale. All five members of the unit made the All-Area team in addition to tight end Jace May. May (25), Tyler Wilhelm (50) and Hunter Vanmeter (not pictured) were first-teamers, and Carter Hess (77), Zander Jenkins (59) and Reese Vogtman (78) slotted on the second team.

The Sentinels, winners of the Maryland Class 1A state championship, led the way with 10 selections, followed closely behind by the Miners, who were state runner-up to Fort Hill, with eight.

Northern tallied just four players on either the first or second teams, but all four landed on the top squad. Frankfort garnered three selections, followed by East Hardy with two, and Allegany and Keyser with one.

Though the Campers landed just one player on the first team, they slotted seven total on the first and second teams — the third-highest total behind Fort Hill and Mountain Ridge.

The All-Area ballot was compiled by nominations submitted by area head coaches, who then voted on who should be on the squad. Eleven coaches submitted nominations and nine returned ballots.

The quarterback on the top squad was Mountain Ridge’s Bryce Snyder, who took home the title of Offensive Player of the Year over the weekend. The 6-foot-2, 210-pound gunslinger set the area on fire completing 157 of 260 passes (60.4%) for an Allegany County record 2,367 yards, 29 touchdown passes to just six interceptions. Snyder also rushed for 521 yards and 12 scores.

His 41 total touchdowns were the highest mark in the area, and his 29 passing scores tied an area record. Snyder was a unanimous selection to the first team.

Joining Snyder in the backfield is Fort Hill fullback Blake White, the area Player of the Year. White rushed for 1,353 yards on 132 carries (10.3 yards per carry) and 21 touchdowns. The 6-2, 180-pound senior was the area’s second-leading rusher behind Northern’s Jamison Warnick and led the region in rushing scores. For that, he was a unanimous first-team pick.

Warnick headlines the all-purpose slot with an area-best 1,459 rushing yards and 18 touchdowns on 228 carries. The do-it-all 6-0, 180-pound senior added an area-high 523 return yards and a score and 341 passing yards and five touchdowns to his resume.

Lee and Warnick were both unanimous first-team all-purpose back selections.

On the outside, Dawson Price paced the receiver group with eye-popping pass-catching numbers. The 6-3, 205-pound junior was electric for East Hardy with an area-best 1,200 receiving yards and 15 touchdowns on 56 grabs. Price averaged 21.4 yards per catch.

Nate Washington (6-2, 165) starred all season as Snyder’s top target for Mountain Ridge, and he gets the other receiver nod. Washington tallied 856 receiving yards and 14 scores on 46 receptions for 18.6 yards a catch.

They’re joined by a pair of Mountain Ridge bullies: Peyton Miller (6-3, 265) and Jacob Wildeson (6-3, 230), who dominated opponents up front as the Miners averaged more than 44 points a game.

Fort Hill kicker Jacob Tichnell earned the first team kicking duties after knocking 3 of 5 field-goal attempts through the uprights for a long of 35 and making 56 of 58 points after touchdowns. Tichnell also booted 16 touchbacks.

Just like Fort Hill dominated the trenches on offense, the first-team defensive line features much of the same with a trio of Sentinels on the unit.

TJ Lee, the Defensive Player of the Year, was unstoppable for Fort Hill accumulating 103 tackles (33 solo), 20 tackles for loss, 12 sacks, one interception, one forced fumble and three fumble recoveries. The 5-11, 160-pound senior was a unanimous selection.

Carter Hess, the Lineman of the Year, presented problems for all of Fort Hill’s opponents this season as a 6-2, 278-pound sophomore, tallying 70 tackles (25 solo), 18 tackles for loss, six sacks and two fumble recoveries at defensive tackle.

Northern’s Chance Ritchey moved off the line to linebacker this season, and to say the move paid off would be an understatement. The 5-11, 225-pound senior headlines the linebacker unit with an area-best 137 total tackles and 91 solo stops. Ritchey was a unanimous first-team pick.

Allegany sophomore Zach Michael (6-2, 200) joins Ritchey at linebacker after recording 100 tackles (27 solo), one tackle for loss, one sack, one safety, one interception and one forced fumble.

A pair of Allegany County linebackers fill out the unit. Mountain Ridge’s Hunter Clise (5-9, 205 pounds) had 82 tackles, an area-high 24.5 tackles for loss, two sacks, one forced fumble and one recovery over the course of his junior season.

In the secondary, Frankfort safety Luke Robinette repeats on the All-Area first team after recording 78 tackles (30 solo), seven tackles for loss, one interception, four pass breakups, two fumble recoveries and a touchdown during his junior campaign. At 6-3, 180 pounds, Robinette is also the Falcons’ quarterback.

Robinette is joined by another junior defensive back, with Fort Hill’s Tavin Willis getting the nod. Willis (5-11, 168) finished with 86 tackles (42 solo), two tackles for loss, one sack, two interceptions, seven pass breakups and one touchdown.

Mountain Ridge’s Collin Lowry was the lone senior of the group. The 5-11, 185-pound Miner capped off his high school career with 66 tackles, two tackles for loss, four interceptions, six pass breakups, two forced fumbles, one recovery and one touchdown.

Mountain Ridge special teams star Ashton Shimko, who was also the second-team placekicker, was selected as the first-team punter. Shimko punted just 11 times but logged 442 yards for an area-best 40.2 yards per punt average.