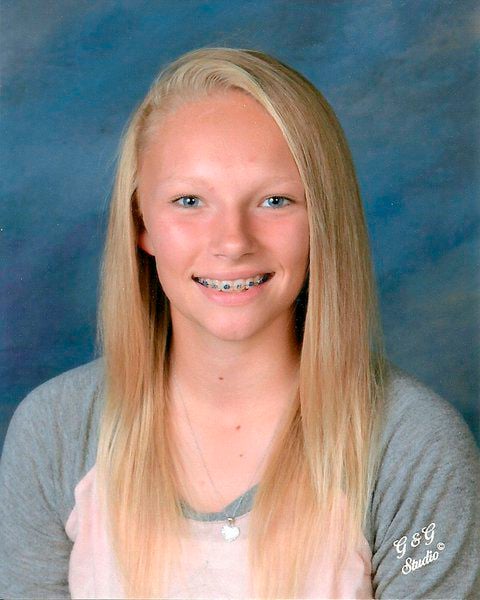 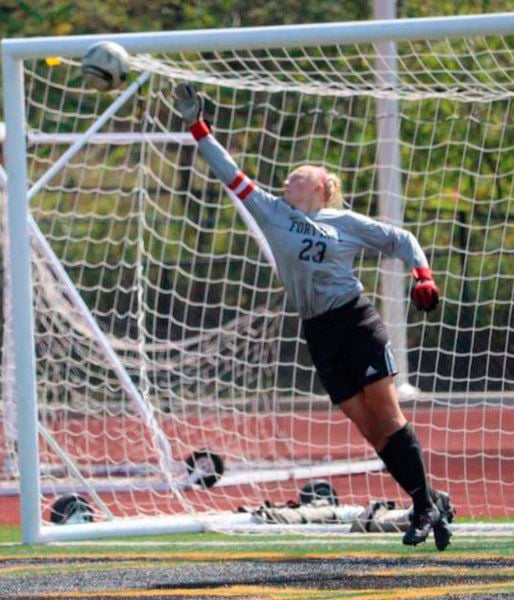 Fort Hill's Hailey Ternent maneuvers to make a save in a game at Mountain Ridge High School. Ternent was voted co-winner of the Miriam Sincell, Esq., Goalkeeper of the Year Award.

Fort Hill's Hailey Ternent maneuvers to make a save in a game at Mountain Ridge High School. Ternent was voted co-winner of the Miriam Sincell, Esq., Goalkeeper of the Year Award.

CUMBERLAND — It is a frequent occurrence that goalkeepers go back-to-back when winning the area’s top girls goalkeeper award. But winning it three times in a row in the award’s short history has yet to happen — until now, as Fort Hill’s Hailey Ternent capped off her high school career with a third-straight Miriam Sincell, Esq., Goalkeeper of the Year Award, voted on by area high school coaches.

Ternent’s three-peat comes in a year in which she shares the award with Allegany’s Katie Sterne (see separate story).

Ternent and Sterne will receive their awards at the 72nd Dapper Dan Sports Award Banquet, which will be held Feb. 23, 4 p.m., at the Ali Ghan Shrine Club.

Ternent became the third player to go back-to-back last season, after Chelsea Muir (Mountain Ridge) won it in 2012 and 2013 — the first two years the award existed — and Carly Rodeheaver (Northern) went back-to-back in 2015 and 2016.

The Sentinel shot-stopper’s third straight top goalkeeping honor came after starting all 13 of her team’s games in goal, stopping 182 of 215 shots faced for a .847 save percentage, good for third in the area goalkeeper ranks. She yielded 33 goals and posted one-and-a-half shutouts.

“It has been an absolute pleasure to coach Hailey for two seasons,” said Fort Hill second-year head coach Mark Kowalski. “This year, we saw her grow even more into a vocal general on the field. She always made sound decisions from the goalkeeper position, directing players in all areas of the field. Hailey is courageous, tenacious and determined to improve each and every time she laces up her cleats.”

Ternent was a four-year starter for the Sentinels and two-year captain, stopping nearly 200 shots in each of the past two seasons.

During her junior campaign, she saved 199 shots, allowed 26 goals (.884 save percentage) and posted a pair of shutouts.

“Hailey has a heart and passion for soccer,” Kowalski said. “She takes every opportunity to grow as a player and a leader. Watching her work with younger players this year was truly remarkable. Many times I would see an issue with technique that I would want to address with a player, and before I could walk across the practice field, Hailey was there, helping that player with her technical performance.”

Ternent was well-rounded and applauded for her efforts in the field this season, where she tallied a goal and an assist.

“Hailey is also a skilled field player,” said Kowalski. “Not many goalkeepers are willing to shed the gloves and long sleeves for a field jersey, but Hailey is just as comfortable and solid out on the pitch as she is in the keeper’s box.”

Ternent is also a member of the basketball, softball and unified bocce teams, as well as a National Honor Society member.

Her sophomore year, which kicked off this run of three straight top goalkeeping honors, Ternent posted four shutouts — a career-high — with a .861 save percentage, also a career-high, with 93 saves and 15 goals allowed. As a freshman, Ternent stopped 111 shots while allowing 27 goals (.804 save percentage) with three shutouts.

“Hailey is an outstanding captain for our team, both in leading by example and by directing her team on the field,” said Fort Hill assistant coach Jason Bennett. “She is eager to jump in and help younger teammates with their skills, and she shows her entire team how to play the game with intensity, passion and, most of all, heart.”

During her four-year career, a span in which the Sentinels compiled a 20-31-4 overall record, Ternent posted a .853 save percentage with 585 saves and 101 goals allowed to go along with 10.5 shutouts.

“She has been a four-year varsity starter and has grown so much over the years,” said Fort Hill goalkeeper coach Ashlee Stumbaugh, who coached Ternent all four years. “Hailey is always looking for ways to improve her game even when she has an outstanding game or practice. Hailey not only leads by example, but also by helping those around her to understand the game of soccer.

“Hailey is always eager to play in any position, whether it be in the goal or the field; not many players are willing to be that versatile. Hailey always seems to amaze me; when I think she has reached the top, she finds a way to improve her skill or leadership. Hailey played each game with so much intensity and heart that never went unnoticed by other coaches, fans, and even the referees.”