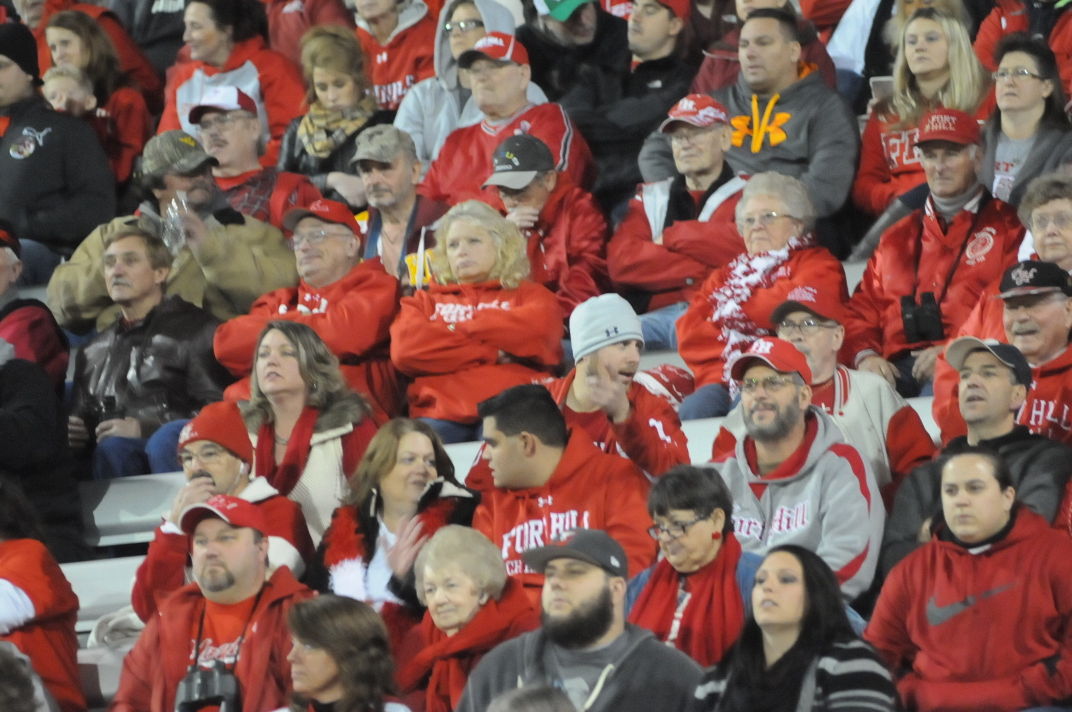 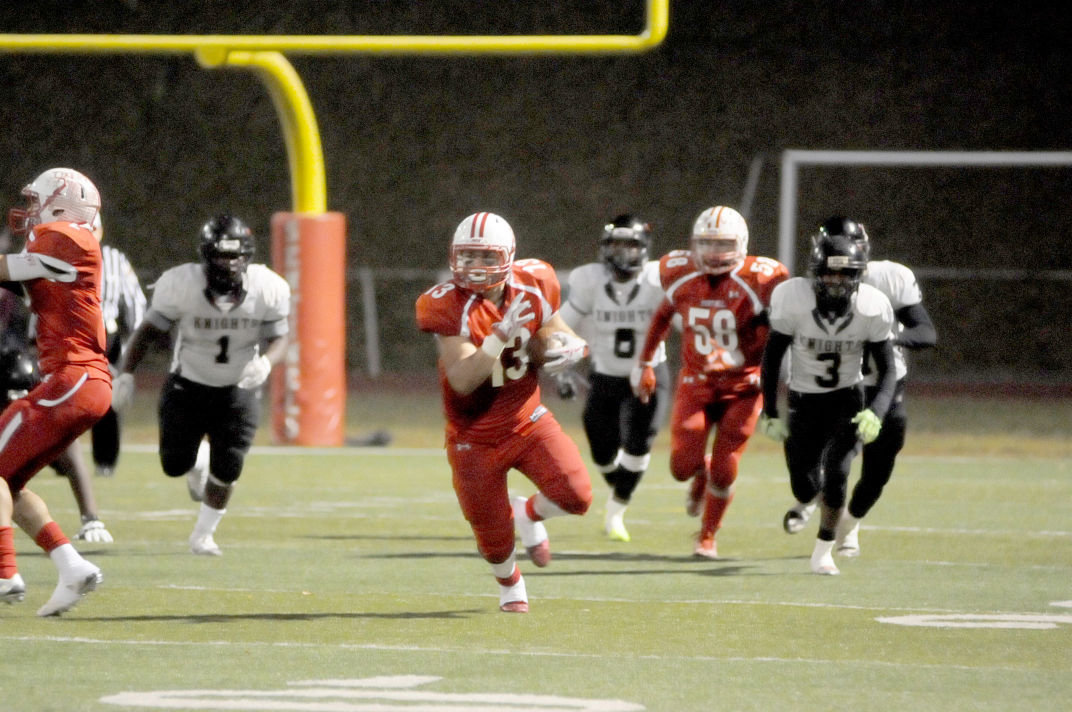 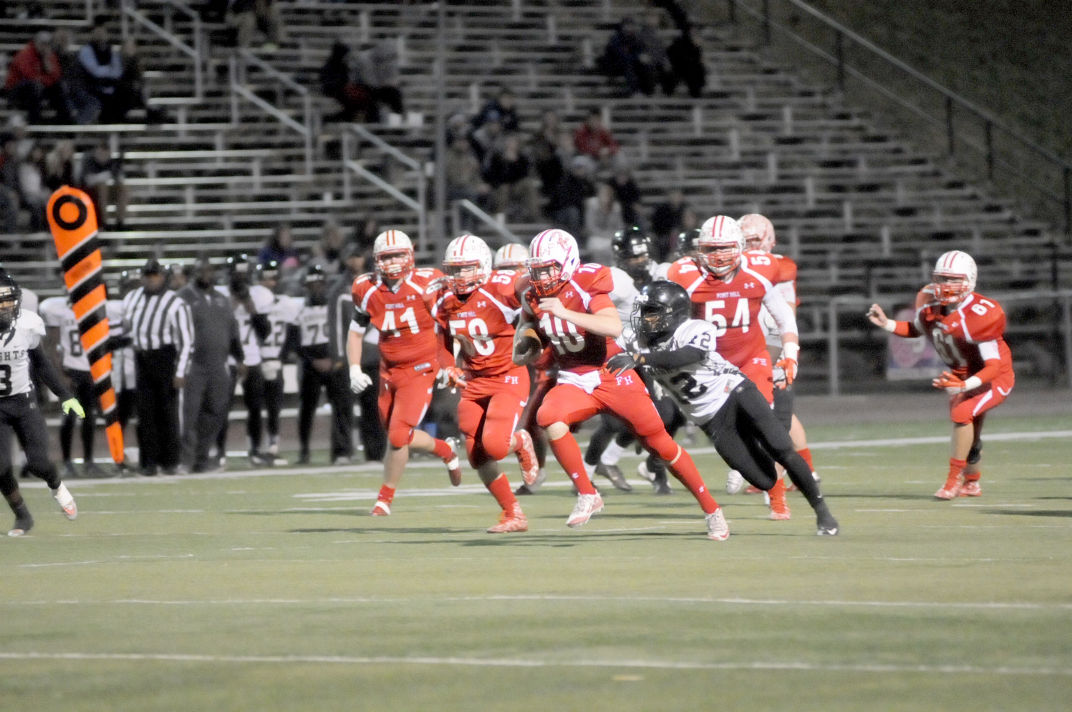 CUMBERLAND — When it Raens it pours, and it poured all night on Forestville Friday at Greenway Avenue Stadium, where the Fort Hill Sentinels took an impressive step toward a third straight football state championship.

Raen Smith ran for 246 yards and a touchdown, Brayden Brown ran for 97 yards, picked off a pass and scored two touchdowns, and Nathaniel Graves ran for two touchdowns, threw for another and returned an interception for a fourth in powering the top-seeded Sentinels to a 55-22 victory over fourth-seeded Forestville.

The win puts Fort Hill at 11-1 heading into next Saturday’s Class 1A state championship game at M&T Bank Stadium in Baltimore. The two-time defending state champions, will play the winner of today’s Havre de Grace-Friendship Academy semifinal. Kickoff for the title game will be 3:30 at the home of the Baltimore Ravens.

“It’s a total team effort, and I’m just so proud of these guys,” said Fort Hill coach Todd Appel. “We’ve come a long way. A lot of people didn’t give us much of a chance after losing so many kids last year. But these guys proved a lot of people wrong.”

But it was all Fort Hill from there. The Sentinels scored 40 straight points and finished with 516 yards of offense. The majority, 449, came on 42 running plays.

“We had a good game, and a good offensive game tonight. I have to give all the credit to the coaches and my line for blocking for me,’’ said Smith, who had 97 yards in the first quarter and 131 in the third. “We come together as a team. We work so hard at practice every day and it pays off in the end.”

The teams combined for 39 points in a first quarter that seemed as if it would never end.

Forestville took the opening kickoff and needed only three plays to score, with the speedy Green scrambling out of the pocket and dashing down the sideline for a 35-yard touchdown run. He also ran for the conversion.

Fort Hill topped that, and needed only two plays to answer. Both were runs by Smith, the first a big 40-yarder and the second a 12-yarder into the end zone to complete a 33-second scoring drive. Smith ran for the conversion to tie it at 8-8.

The Knights were on the march again when Green hit Marquez Smith for 27 yards on a fake punt. But three plays later, Green, under a heavy rush, was intercepted by Poling at the Fort Hill 15. The Sentinels went 73 yards in only five plays, with Smith getting 14- and 17-yard gains before Brown went 23 yards untouched to put Fort Hill up 15-8 with 4:05 left.

One play later, however, Forestville would be back on top on Lawerence’s 80-yard run and Green’s two-point conversion that made it 16-15, still with 3:52 left in the period.

Brown put the Sentinels on top to stay, following a convoy of Timmy Friend, Austin Trenum and Danny May into the end zone on a 22-yard run that made it 23-16 with 2:22 left in the quarter.

That’s where Fort Hill’s defense kicked in. The Knights came up empty on their next six possessions. It was 55-16 when they finally scored again, in the final minutes.

“We had to contain (quarterback James Green). When he dropped back he was making some big plays on us,’’ Poling said of the keys to stopping Forestville’s offense. “That’s by far the fastest team we’ve played.

“I was a little surprised with how fast they could score. But I knew we were all right because I knew they couldn’t stop our offense. Our offense went down the field pretty easily on them.”

Austin Farrell kicked a 23-yard field goal and Lennon Squires hauled in a 38-yard touchdown pass from Graves to make it 33-16 at the half.

Graves, who had 53 yards rushing and 67 passing, scored the next three touchdowns — on a 37-yard sneak in the third quarter, a 10-yard run to start the fourth, and a 44-yard interception return a minute later as the lead ballooned to 55-16.

Forestville scored the final points on a 10-yard pass from Smith to Lawerence with just over three minutes to go.