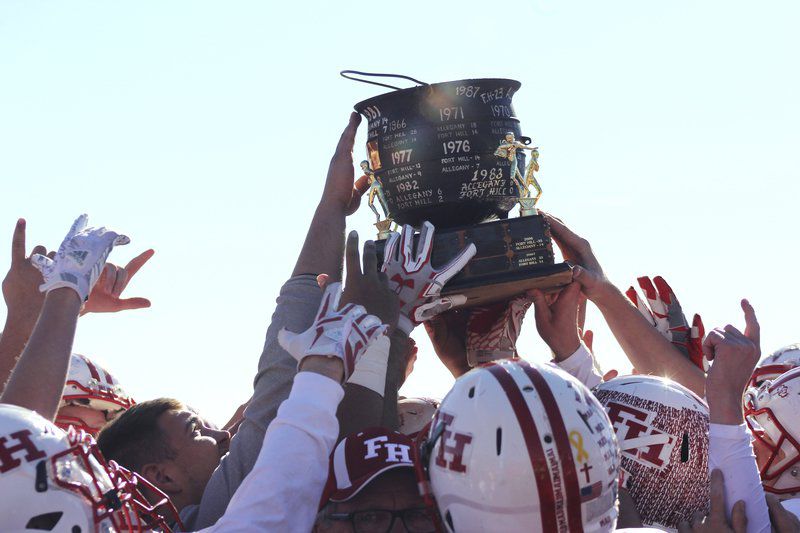 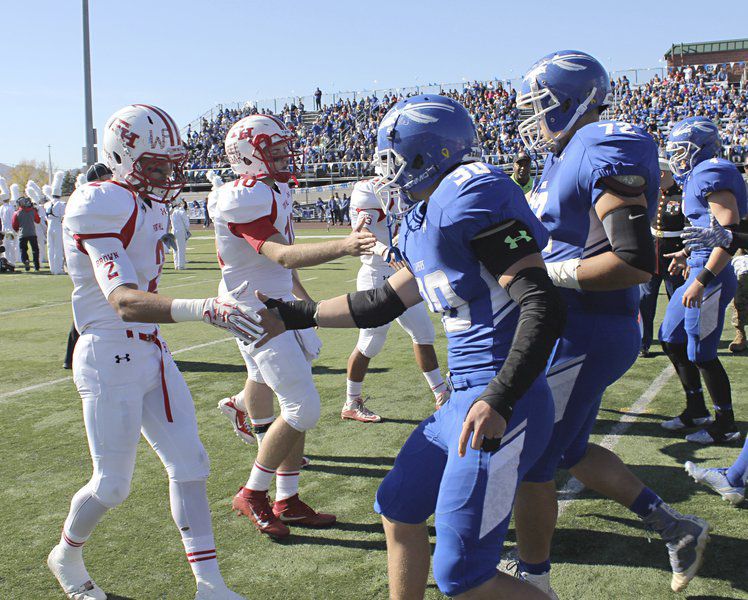 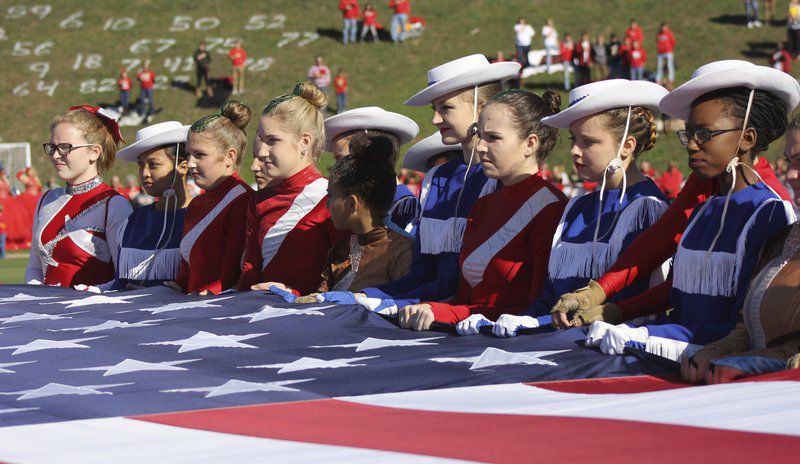 Members of the color guards and dance teams for Allegany and Fort Hill high schools hold the American flag during the national anthem ahead of the 42nd annual Homecoming game Saturday at Greenway Avenue Stadium.

Members of the color guards and dance teams for Allegany and Fort Hill high schools hold the American flag during the national anthem ahead of the 42nd annual Homecoming game Saturday at Greenway Avenue Stadium.

CUMBERLAND — The first half ended in a bit of uncertainty.

The second did not.

Fort Hill did it again, this time with a dominating second half, three touchdowns on fourth down plays, and two touchdown passes and two interceptions by Nathaniel Graves to run its Homecoming game winning streak to nine with a 48-13 victory over Allegany Saturday afternoon at Greenway Avenue Stadium.

Raen Smith ran 14 times for 99 yards and a touchdown, and Troy Banks ran 13 times for 83 yards and a pair of touchdowns in a battle of Cumberland unbeatens played in front of more than 8,000 fans whose sun-drenched garb turned the Greenway stands into a shining sea of red and blue.

But it didn’t come easily. Allegany (9-1) led 3-0 early, 10-7 in the second quarter and trailed by only 20-13 after a chaotic finish to the first half. Tattum Logsdon’s 38-yard field goal as time expired left some heads shaking, some mouths disputing and all the Campers dashing to the locker room with the momentum.

Down 20-10 in the final seconds, Karson Robinette was stopped at the 12 on a 2-yard screen pass with the clock running and Allegany out of timeouts. Unknown at the time by some was that the Campers had been called for having an illegal man down field. The penalty was assessed, seven seconds were placed back on the clock, and Logsdon got off the kick.

The Campers headed to the locker room with momentum. The Sentinels marched up the steps in a bit of frustration.

When they both came back out, it was a whole new ball game.

Coach Todd Appel said it was because they went back to basics.

“It was chaotic, and the field goal was wide left, according to our end zone camera,’’ he said. “But at halftime, it wasn’t like we were angry about anything. It was, ‘Hey, forget about that. Don’t worry about things you can’t control.’

“The only thing you can control is to try to play better, and tackle better. We didn’t tackle well the first half, but I give credit to (Allegany). They made us miss. Good backs make you not tackle well. (Elisha) Llewellyn and (Sean) Rhodes did that. We talked about tackling, and adjusting a little bit. We got back to basics.”

Getting back to basics, in the third quarter on offense, was to feed fullback Smith. He ran eight times for 56 yards in the period, with 13- and 14-yard gains that led to a 6-yard touchdown run with 6:45 on the clock to make it 27-13. The drive was set up by a 40-yard punt by Trenton Groves that pinned Allegany at its five.

A short punt by Allegany gave Fort Hill the ball at the Campers’ 43, and a little good fortune fell Fort Hill’s way when Banks recovered a fumble in the end zone on a fourth-and-goal from the one.

“The handoff sort of bounced off my leg, and the ball was laying there in the end zone,’’ said Banks. “I got on it as soon as possible.”

The Campers, who had 151 yards in the second quarter, managed only 16 in the third.

“When we came out of the second half we still had confidence,’’ said Allegany coach Bryan Hansel. “But we had a three-and-out and punted. Our next possession was at our five, and we had another three-and-out. Then a third three-and-out later. When you do that to start the third quarter, it’s hard to come back.

“I think the difference in the halves was our ability to be physical,’’ Appel said. “If you can do that for four quarters, I think you have an advantage. Allegany is a physical team. We might have wore them down a bit. My hat’s off to them. That’s the best team we’ve faced all year. Defensively, especially.”

An interception by Graves set up the final touchdown, a 40-yard, six-play drive that ended in a 1-yard sneak by the senior quarterback with 3:31 to go.

The first half featured plenty of big plays by both sides. Allegany took the opening kick 75 yards to the Fort Hill 4 before having to settle for a 20-yard field goal by Logsdon. Bratton had a 41-yard run during the 5:16 possession.

Fort Hill took the lead in the final seconds of the quarter when Brown, with a 6-inch height advantage, grabbed a pass over Logan Milburn in the corner of the end zone. The 23-yard pass from Graves came on fourth-and-21.

“That first drive was a great one for us, but in the end we had to settle for three instead of seven,” said Hansel. “And on the pass, Logan had great coverage and technique, but (Brown) made the catch. That was a pretty big swing there.”

The Campers answered a few minutes later, taking advantage of a short punt and going 65 yards, the big plays being a 47-yard run by Robinette and a 23-yard pass from Rhodes to Llewellyn. Robinette’s 1-yard plunge put Allegany on top again, 10-7, with 9:35 left in the half.

An 18-yard scramble by Graves set up a 16-yard touchdown pass to Luke Hamilton that put the Sentinels on top to stay, at 14-10, with 6:46 on the clock. Another touchdown on a fourth-down play, this one a 2-yard run by Brown, made it 20-10 at the 2:56 mark, setting the stage for the uncertain final minutes and field goal of the half.

That final Allegany drive of the half featured a 54-yard run by Llewellyn and a 21-yard pass from Bratton to Rhodes.

“Overall, our kids played well. In such an emotional, energy-filled game, when you get down 21, it’s hard for kids to stay in it and fight. The first half kind of went how we expected it would go. They had a great game plan and wore us down in the end on a short field for most of the second half.

“The second half just got away from us. The first half is a half we can hang our hat on. We just can’t let the second half happen again if we get another shot at them.”

The scoreboard didn’t lie, but it appeared a bit misleading to some, even Graves.

“The end of the second quarter shook us all a little bit. We didn’t quite understand what was going on, but Coach really put it in our heads that we had to go out and execute in the second half. I knew we would,” he said.

“The score ... what was it?” he asked, and then was told. “It didn’t feel like it. It felt like it was zero-zero the whole game. They were really motivated from the get-go.”

Karson Robinette had 78 yards rushing on 10 carries and Llewellyn had 68 yards on six carries and two catches for 33 yards for Allegany.

Robinette had a game high 11 tackles and Tyrae Barmore eight for Allegany. Poling had eight and Brayden Conley six for Fort Hill.

Fort Hill, the top seed in the Class 1A West Region, will play Northern and Allegany will face Boonsboro in the region semifinals next weekend at Greenway.

CUMBERLAND — Jarrod Harper and Ty Johnson may not be home for the holidays, but they’ll be at the next best place: on the football field.

ANNAPOLIS — Few Maryland high school football teams have played a game this late in a season.