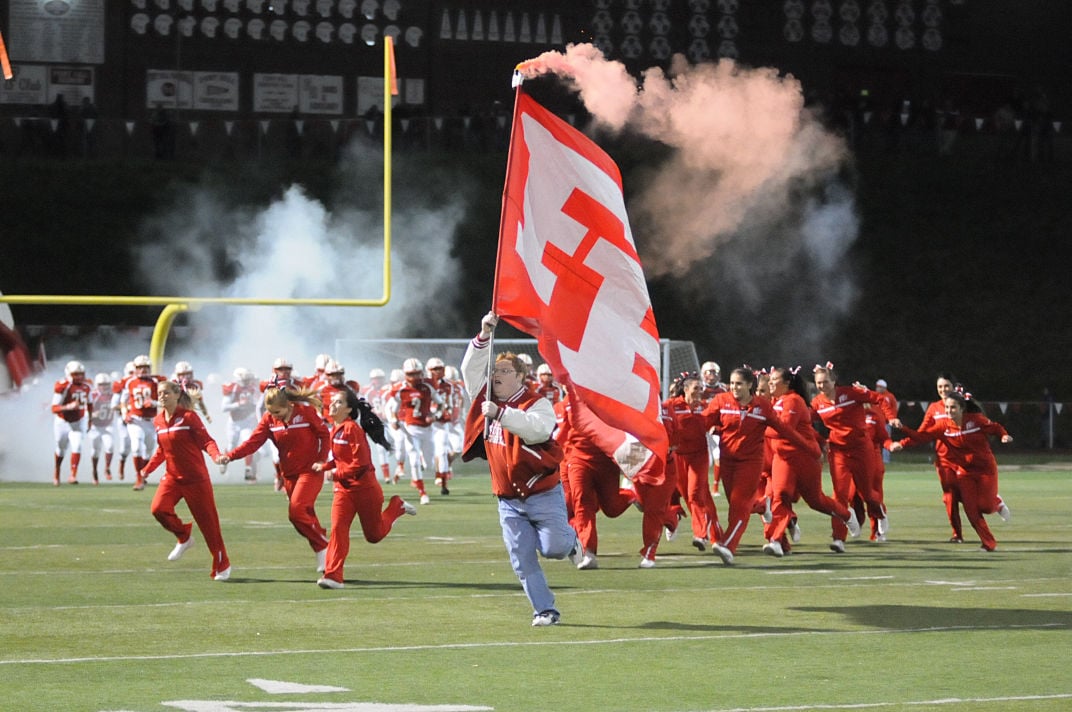 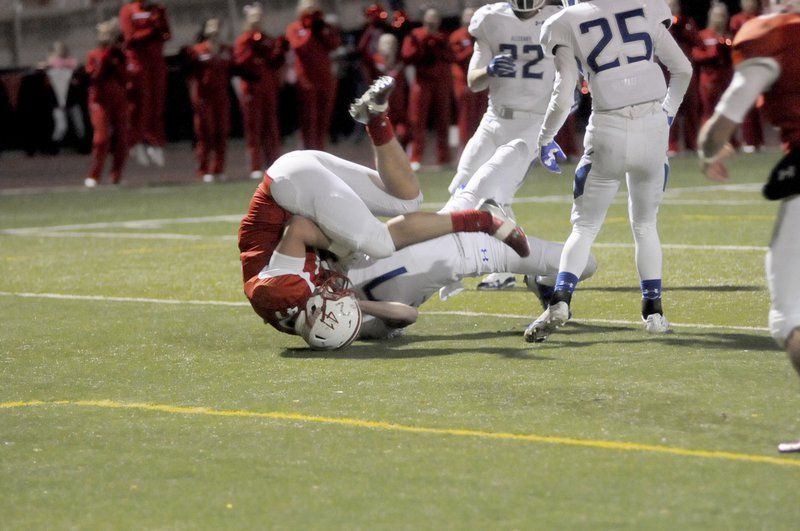 Fort Hill tight end Holden Sibley (41) tumbles in the end zone after catching a 9-yard touchdown pass from Nathaniel Graves during the first half of the Sentinels’ 14-7 West Region championship over Allegany Friday night at Greenway Avenue Stadium. 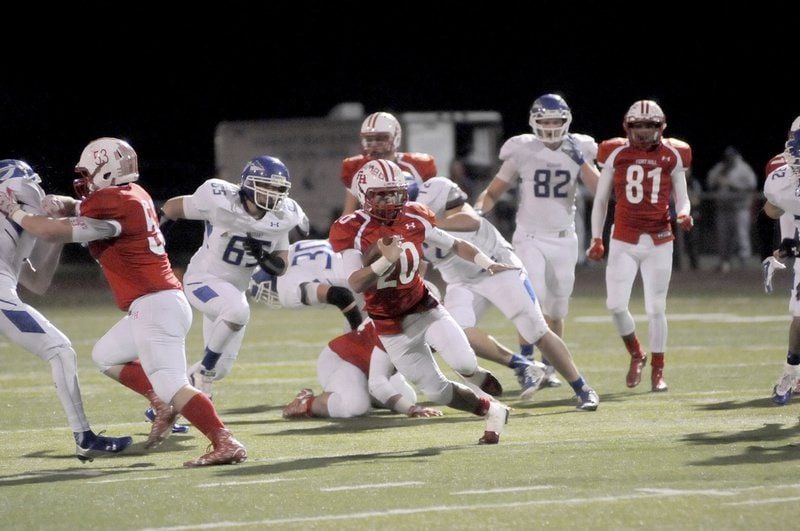 Fort Hill running back Brayden Poling (20) cuts to his right after sprinting through an opening during the first half of the Sentinels’ Class 1A West Region championship game against Allegany Friday evening at Greenway Avenue Stadium. The Sentinels won, 14-7.

Fort Hill tight end Holden Sibley (41) tumbles in the end zone after catching a 9-yard touchdown pass from Nathaniel Graves during the first half of the Sentinels’ 14-7 West Region championship over Allegany Friday night at Greenway Avenue Stadium.

Fort Hill running back Brayden Poling (20) cuts to his right after sprinting through an opening during the first half of the Sentinels’ Class 1A West Region championship game against Allegany Friday evening at Greenway Avenue Stadium. The Sentinels won, 14-7.

Fort Hill found a way, once again, against Allegany, and extended a pair of winning streaks, won the West Region and punched its ticket to the state semifinals with a 14-7 victory Friday night at Greenway Avenue Stadium.

With a big dose of Raen Smith, who accounted for 134 of Fort Hill’s 193 yards of offense, the Sentinels did just enough in a dominant first half and held on in the final minutes of the second for an eighth straight win over their city rival and their 10th straight postseason victory.

It puts coach Todd Appel’s Sentinels, 10-1 this year and 38-1 in their last 39 games, two wins from a third straight Class 1A state championship. They will likely host Forestville in the semifinals, Friday evening or Saturday afternoon, at Greenway.

Smith ran 23 times for 111 yards and a touchdown, but the play of the game came on a pass from Nathaniel Graves early in the first half. On fourth-and-22 from the Allegany 29, Graves somehow avoided a big Allegany rush and dumped a pass to Smith, who bobbled the ball at first, then tucked it away and fought his way up field for 23 yards and a first down at the six.

“It was absolutely magical,” Appel said of the play, which hadn’t been in the Fort Hill playbook very long. “We put it in in our mat room today. It didn’t go the way it was supposed to. It was supposed to be cleaner than that.

“Nathaniel made a great play, and Raen made a great catch. Raen has great hands for such a big guy. He looks like an offensive guard but has athletic skills of a back. We tried to shoot ourselves in the foot down there with a lot of penalties and such, but the kids rose to the occasion.”

Three plays later, Graves hit Holden Sibley on a 9-yard touchdown pass that capped a 55-yard, 11-play opening drive and gave Fort Hill a 7-0 lead with 5:20 left in the quarter.

The fourth-and-22 conversion was one of two big plays in the first half that broke Fort Hill’s way. The other also involved Smith, in the second quarter, when he ran 15 yards but fumbled fighting for an extra three feet and a touchdown. The ball rolled out of bounds at the Allegany 1-yard line. A different bounce, and it could have rolled through the end zone for a touchback.

Instead, Fort Hill got the ball at the one, and on the next play Smith powered into the end zone to make it 14-0 with 6:27 left in the half. The 85-yard drive included a 23-yard run by Brayden Poling, 15- and 10-yard runs by Smith and a personal foul on Allegany.

“Fort Hill made good plays, especially on the fourth-and-22, and the breaks didn’t go our way,’’ Allegany coach Tom Preaskorn said of the first half. “The kids played hard and with a lot of heart, and I’m proud of them. We had a great senior class.

“Fort Hill did a good job on defense. You hate to end a season like this. Two of the best teams in the state playing here right now. A lot of people didn’t give us a chance. But we came down here and played our hearts out. It was a great ball game.”

Allegany had one possession — a three-and-out —in the first quarter and only 41 yards of offense in the first half compared to Fort Hill’s 155. But everything changed in the second, with Allegany’s defense allowing Fort Hill only one first down and 38 yards over the final two periods.

The third quarter was still 14-0 midway through the fourth when Allegany put together a 60-yard, 13-play drive and scored on a fourth-down, one-yard plunge by Tyler Eirich with 4:42 to play. All the plays were runs, and included a 12-yard gain by Eirich and a 16-yarder by Brendon Dougherty, with a personal foul tacked on to get Alco to the Fort Hill five.

“We were able to make some adjustments at halftime,” Preaskorn said of the differences in the halves. “They spread us out a little bit and ran the fullback in the first half. Coach (Tim) Foley did a good job adjusting the defense, and coach (Brian) Miller did a great job with the offense in the second half. We knew we couldn’t run on them, but when we passed a little bit it opened up the run. Have to hand it to the coaching staff. They made some great adjustments at halftime.”

Allegany forced a quick Fort Hill punt and had the ball again, at its 22, with 3:10 left. A pass interference call on Fort Hill and a personal foul for a late hit on scrambling quarterback Carson Imes had Alco at the Fort Hill 47. With Imes out and Sean Rhodes at quarterback, Elisha Llewellyn ran nine yards to the Fort Hill 38. That gain was nullified as Allegany had too few men on the line of scrimmage.

Brayden Conley, the Homecoming’s defensive player of the game, stormed through the line for a 12-yard sack of Imes on the next play, and on third-and-27, Graves sealed the Fort Hill win with an interception at the Fort Hill 34.

“Raen and the offensive line controlled the first half,’’ Appel said. “In the second half, we just spun our wheels and I think it had a lot to do with Allegany’s defense and the things that they did. But our defense isn’t too bad. It’s come along way since giving up 41 to Keyser. They’ve gotten a lot better. Tonight they struggled a bit at times, but they gave up less than Allegany did, so we won the game. We have a team of players, great kids, who have gotten better all through the year.”

Like Preaskorn, Appel lamented the fact the two teams had to play so early in the postseason.

“That’s a great team over there. It’s a shame they can’t go further because the playoff system is so bad,’’ he said. “But that’s the way it is, until someone changes it. When you have Boonsboro, Allegany and Fort Hill in the same region, and only one gets to go to the semifinals, I think it’s a shame.”

Eirich had 16 carries, 48 yards and the touchdown for Allegany (9-3), whose defense gave up just two touchdowns in the two postseason games. Imes completed 6 of 13 passes for 32 yards, with Rhodes catching three balls for 27. Eirich had two sacks in the first half and Kristian Robinette and Caleb Wilt had big tackles for losses on third down plays in the second half.

Avery Knippenberg had two sacks in the first half and Luke Stegmaier also stood out on defense for Fort Hill with several big plays, including a tackle for a five-yard loss in the second quarter and a sack on third down in the third.