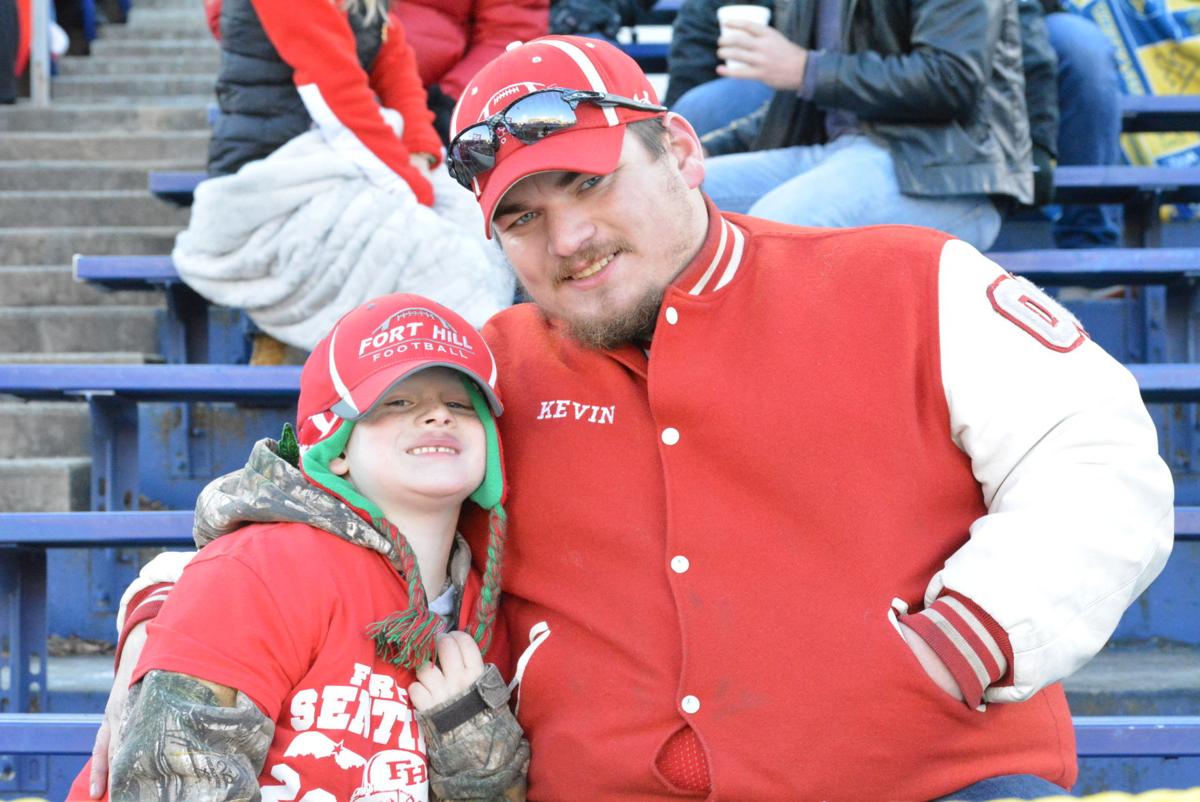 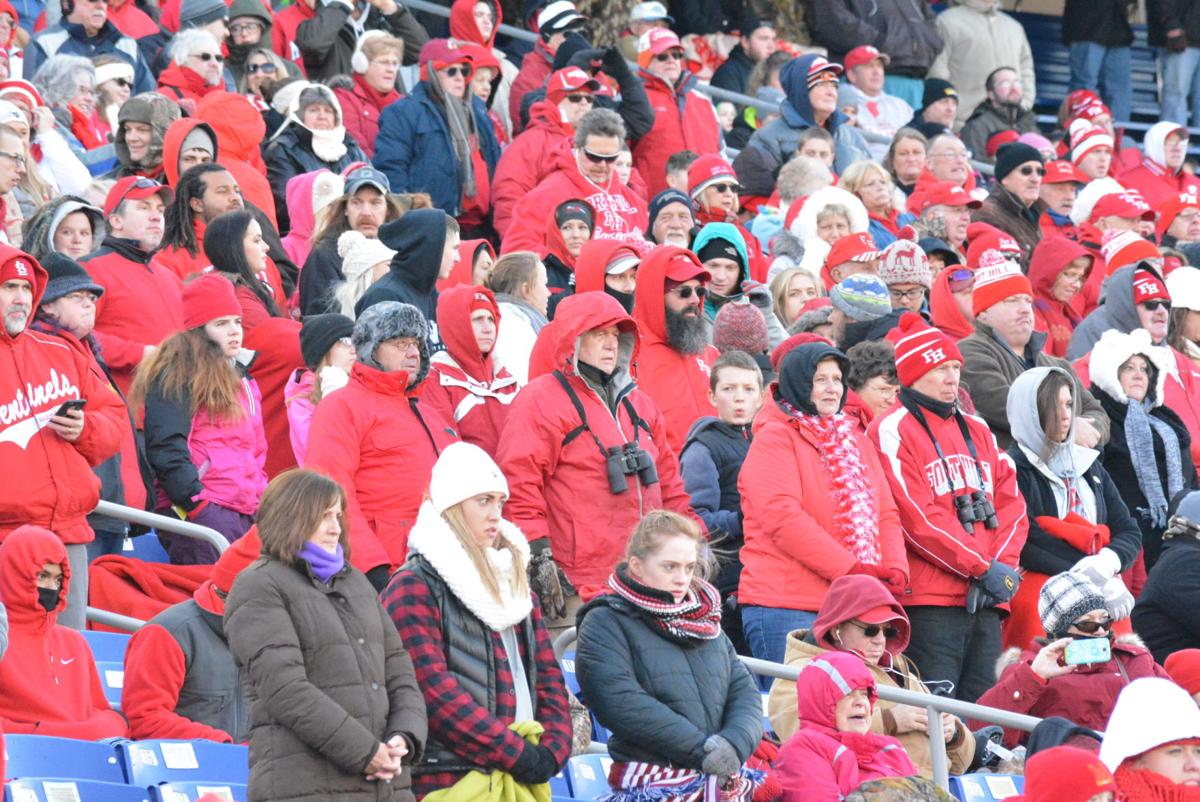 The Fort Hill Sentinels came home to another hero’s welcome Saturday night, and not simply as state football champions.

They are four-time state champions, the streak continuing with a 35-14 win over Havre de Grace at Navy-Marine Corps Stadium, tying Urbana for most consecutive state championships.

Troy Banks ran 25 times for 189 yards and scored four touchdowns and Brayden Brown ran 22 times for 140 yards and a score on a day in which records fell like dominoes for The Big Red Machine.

Head coach Todd Appel said the records are nice, but his teams don’t play for them. What do they mean to him?

“It’s a payback for hard work,” he said. “We don’t sit down and look at record books. We just try to accomplish goals through hard work. We try our best to do our best every day. What people see is the tip of the iceberg on the field. What you don’t see is how hard they work. The culmination of that work are the wins.”

Fort Hill finished 14-0 and will take a 25-game winning streak into next year. They are 54-1 during their four-year title streak, the lone loss being to Keyser.

A year ago, Fort Hill beat Havre de Grace (10-3) 44-14 in Baltimore. This year the score was almost the same, but it was anything but a repeat on the field. Last year’s game was a runaway. This year, the Warriors trailed by only a touchdown, 21-14, after two quick scores in the third quarter.

“With the experience we had from playing them last year, we knew how physical they were,” said Havre de Grace coach Brian Eberhardt. “We had to try to match that, and I don’t know if we quite got that done. We had our chances, getting back to within 21-14, but their offense is awfully powerful and we couldn’t get over the hump.

“The critical point was when we were down 21-14 and couldn’t get their offense off the field.”

Down 21-0 at the half, the Warriors scored two touchdowns in the first six minutes of the third quarter, the first coming after the Sentinels lost a fumble on the second-half kickoff. Momentum shifted after the second TD, causing a bit of uneasiness on the Fort Hill side.

“Absolutely,’’ Appel said when asked if there was nervousness after what had transpired. “We shot ourselves in the foot a good bit, but my hat goes off to Havre de Grace. They caused a lot of the things that happened.

“We were searching for some drives, and we had a big drive after it was 21-14 that took up some clock that Troy and Brayden were a big part of, that really helped us out to give us a cushion.

“Our defense played well all night, but we gave them a short field, and that caused us to have our backs against the wall. And I don’t care how good you are defensively, when you have to defend only 14 yards, it’s tough to do.”

The drive that Fort Hill got when it needed it the most began at the Sentinels’ 17. They went 83 yards in 17 plays, eating up nearly five minutes of the clock. Brown had a big 33-yard run and Banks scored the TD on a five-yard run, which made it 28-14 with 1:08 left in the quarter.

The Warriors weren’t done either. And they appeared ready to answer when they got to the Fort Hill 10 after a 33-yard pass play and a personal foul on Fort Hill. But two plays later, in the opening minute of the fourth quarter, Brown intercepted Mike Flosser’s pass at the five.

“It was the right call. I was just a little late on the throw,” Flosser admitted. “(Brown) stepped in front and made a great play.”

After an exchange of possessions, the Sentinels put the game away and their names in the record book with a 49-yard touchdown drive that featured 22- and 17-yard runs by Banks. He scored on a 10-yarder with 3:38 left, making it 35-14.

Banks had 14- and five-yard touchdown runs in the first half.

“The offensive line was definitely the key, and the other blocks backing for me,” said Banks, whose third TD gave Fort Hill the record for most points in a season. “It means a lot, but not really much to me. I’m just here to play with my family and for my team … just doing what I can to help them.”

The Sentinels finished with 405 yards of offense, but little came in the opening portions of each half.

Havre de Grace was ready to take the early lead with reliable place-kicker Clay Harris lining up for a 37-yard field goal midway through the first quarter. A strong rush by Brown and Brayden Conley changed things, with Conley blocking it. Brown was credited with the block initially by game officials, but it was Conley who blocked it, Brown confessed.

Conley also had a game high six solo tackles, 2 1/2 tackles for loss and a sack as the Sentinels defense held Flosser in check for the most part. He completed 12 of 34 passes for 130 yards and a touchdown.

“We work very hard in practice,” said Conley, a senior with 31 career sacks. “What we mostly do is pass rush, use our hands very well and get off blocks.”

The Sentinels held the Warriors to 32 net yards rushing.

After Conley’s blocked field goal, the Sentinels went 72 yards in 10 plays, scoring on a 21-yard sweep by Brown, who got big blocks on the corner from Luke Hamilton and Brayden Poling.

After a short punt, the Sentinels scored in just two plays. The first a 29-yard run by Smith, and the second a 14-yard run by Banks that made it 13-0 with 10:32 left in the first half.

The final touchdown of the half came with only 42 seconds left when Banks scored on a five-yard run to end a 79-yard, nine-play drive that included an 18-yard run by Graves and 21- and 37-yarders by Brown. Graves found Hamilton with a two-point pass to make it 21-0.

Brown and Smith were on all four teams that won state championships, and the Sentinels were 25-0 with Nathaniel Graves at quarterback.

Additional game coverage and player comments will be featured this week in the Times-News.

WATCH: 'You are all a part of this'

Here are the top stories of 2016 chosen by times-news.com readers in a recent poll:

CUMBERLAND — With a first-quarter burst, a fourth-quarter finish and a ton of rebounds in between, top-ranked Allegany clinched another City L…

CUMBERLAND — Jarrod Harper has already made several of his childhood dreams realities.

Southern teams up to turn down Fort Hill

CUMBERLAND — A dominating second half Thursday night has put Allegany in a familiar place, and this time the Campers will feel right at home.