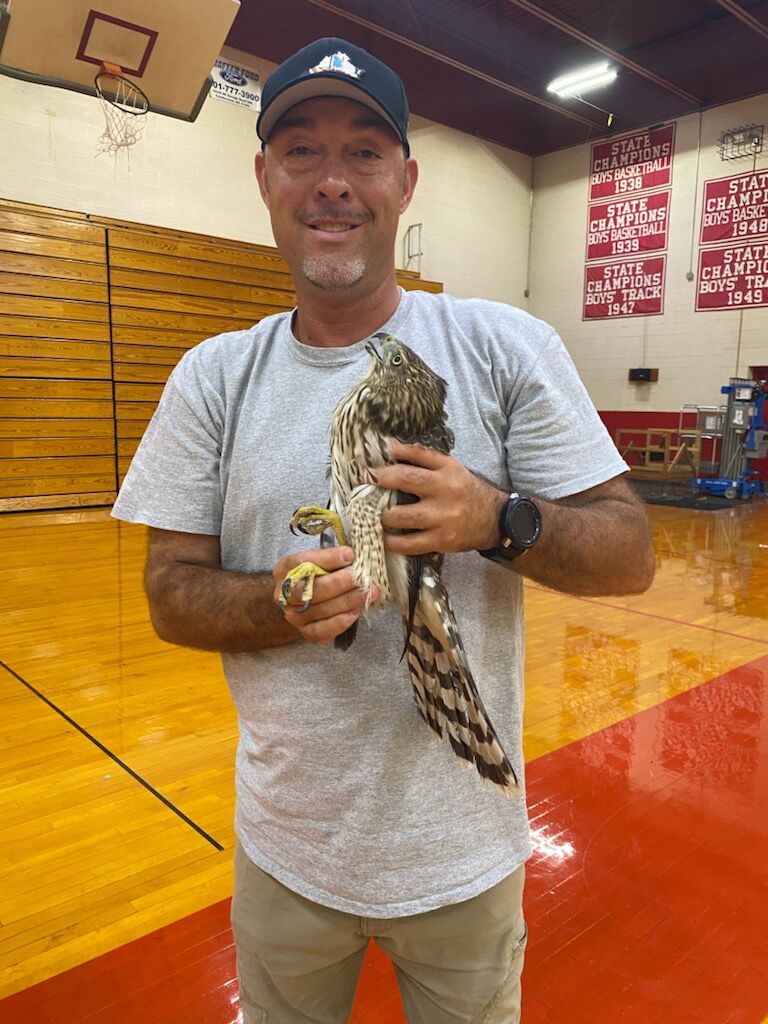 Billy Rios of Owl Moon Raptor Center captures the cooper’s hawk that made its way in the gymnasium at Fort Hill.

Billy Rios of Owl Moon Raptor Center captures the cooper’s hawk that made its way in the gymnasium at Fort Hill.

CUMBERLAND, Md. — When Fort Hill Athletic Director Roy DeVore Jr. was being shown the ropes by his predecessor, Amber Waltz, she didn’t mention anything about hawk removal.

Yet, when a cooper’s hawk flew through the doors of the Fort Hill gymnasium, making the building its temporary home and canceling volleyball Senior Night, it became part of his job description.

Despite days of effort, DeVore, Principal Candy Canan and other faculty members couldn’t capture the hawk. They called in Billy Rios, referred to as the hawk whisperer, from Owl Moon Raptor Center, and he removed their feathered friend in time for the new Senior Night date on Thursday.

“This is my first year as an A.D., I’ve been dealing with all sorts of things. But it’s one of those things I’d never think I’d have to deal with,” DeVore said. “At one point we were trying to get it out with music. Playing the national anthem and the fight song.

“It was almost majestic, flying around the four corners of the gym. It had that perfect vision. It was a total nightmare. He definitely wanted to call Fort Hill home. I really think it’d still be here if we didn’t get him out.

“The staff and custodians really worked well together. It was a team effort.”

On Monday morning, DeVore got an email he never expected from physical education teacher Randy Stewart: there was a hawk in the gym.

Because Fort Hill’s gym isn’t air-conditioned, the door was left open to keep the heat down. A hawk, chasing a pigeon, had made its way into the gymnasium.

It became a game of chicken. The pigeon hiding out from its predator, and the hawk waiting for its prey to try to escape the gymnasium. In the meantime, P.E. classes were shifted outside.

“We’ve had pigeons in there, but the hawk was determined to stay as long as it possibly could,” DeVore said. “We called the Department of Natural Resources, and they set a trap, which was basically two cages.”

The trap was supposed to work like this: an inner cage with a live mouse attracts the hawk, and an outer cage traps it.

But when DeVore walked into the gym on Monday evening during the Sentinels’ junior varsity football game, the mouse was nowhere to be found.

Nicknamed Houdini, the mouse darted past the girl’s dressing room and successfully evaded capture until Canan cornered it with a mop. DeVore caught the mouse with a bucket and returned it to the trap, securing it with duct tape.

Come Tuesday morning, the mouse was again missing and there was a pile of pigeon feathers sprinkled around the gym floor. The hawk had carried the carcass to the top of the fan above the gym, which prevented dehydration in the absence of a water source.

It was all hands on deck.

Librarian Marcy O’Rourke brought in some of her chickens in a crate to try to attract the hawk into the trap. A search party of football players located the missing mouse, and science teacher Carol Garner provided an aquarium for it.

Allegany County superintendent, Jeff Blank, even stopped by to check on the situation.

“We tried every avenue and every path, but of course there’s always going to be a public opinion there,” Canan said. “Folks thought it was a red-tailed hawk, and it wasn’t.

“There was also a suggestion that we brought in some wild birds to fly around and entice the hawk, but that wasn’t true. There were no wild birds flying around.”

Meanwhile, things started becoming desperate on Wednesday. The faculty had resorted to attempting to capture the cooper’s hawk with a net from the top of the bleachers.

“It was a comical sight, but it was becoming somewhat frustrating,” Canan said.

Garner contacted Sarah Milbourne at Rocky Gap, who instructed her to call Owl Moon. Supervisor of Operations Wally High gave the go-ahead, and Rios was contacted.

“I received a call from Ms. Canan, principal of Fort Hill High School, and she said, ‘This may be an unusual request.’” recounted Rios, who has been volunteering for Owl Moon for 10 years. “I said, ‘That’s not an unusual call at all.’ I told her I’d gladly come out.

“Cooper’s hawks are the usual suspects that get caught in buildings. They prey on small to medium-sized birds. They follow prey into buildings and they don’t know how to get out. ... It was a juvenile female cooper’s hawk. Females are generally 25% bigger than males.

“When I got there, I saw that there was a pile of feathers on the gym floor. The pigeon met his demise. I knew it was going to be fruitless that evening, but I still tried.”

His return trip Thursday took him all of 20 minutes to complete the capture. Rios used a trap with a live pigeon, which he assured was just a lure and couldn’t be harmed.

Rios took the raptor back to Boyds in Montgomery County because it was still dark and raptors don’t typically fly at night.

Owl Moon Director Suzanne Shoemaker examined it and administered fluids. They branded the raptor with identification and Rios returned to Fort Hill Friday to release the bird to its natural habitat, which he was adamant about doing.

Upon release, the raptor made a beeline for the gym, which was fortunately closed, and she circled around and flew over the city of Cumberland. Owl Moon didn’t charge the school and is a non-profit, volunteer organization.

Fort Hill, however, provided a donation for their care, time and service, Canan said.

All in all, it was a pretty harmless situation. O’Rourke even got a pet out of it, bringing Houdini home — now named Angus — for her daughters.

If nothing else, all involved have a pretty unique story to tell.

“Everything got cleaned up, we got the decapitated pigeon out of the ceiling of the gym,” DeVore said. “I told my wife, told a couple other people about it, but telling the story doesn’t do it justice. You have those moments when you’re just hysterically laughing at yourself.”

“It definitely became a circus,” Canan said. “The superintendent came over to check over the situation. Teachers poking their heads in. Football team catching the mouse.

“Everybody kind of piled in and tried to assist, and that’s typical Fort Hill nature.”